Dreaming of new ways to connect humans to cities, the Paris-based brothers have sidestepped architectural rhetoric to ignite imaginations with a handful of inspired, three-dimensional sketches 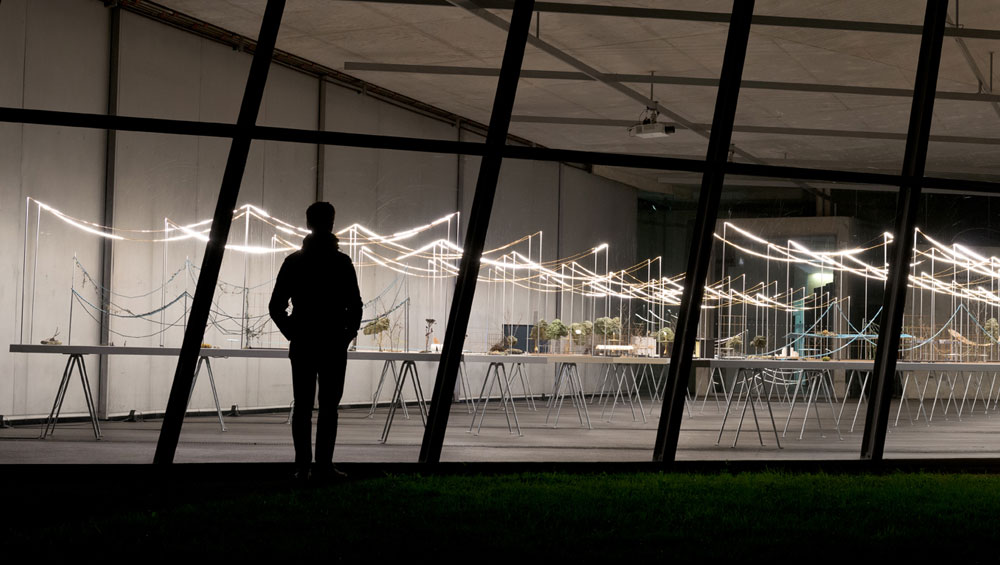 Ronan (b1971) and Erwan (b1976) Bouroullec have worked for the biggest names in luxury design – Vitra, Ligne Roset, Issey Miyake, Axor, Alessi, Magis, Flos, Cappellini, Iittala - but they don’t care for the term “designer”. From their Paris studio, they have created quite a name for themselves in a highly commercial marketplace, yet managed to preserve a fierce independence of spirit that brings a certain quality – and a vital sense of freedom - to whatever project they embark on. As a result, their work is as likely to end up in museums as high-end furniture boutiques. In fact, Galerie Kreo (Paris and London) has given the designers carte blanche to experiment, and frequently publishes or exhibits their proposed solutions/inspirations for the issues of the day.

Inhabiting is an idea close to their hearts, as anyone who saw their collaboration with Danish textile manufacturer Kvadrat at the Victoria & Albert Museum, for the 2011 London Design Festival, would agree. Asked to create something for any room in this vast and opulent, highly formal museum, they chose the cleanest space with the most powerful artworks: the Raphael Court, built to house seven huge paintings by the Italian master. In here, they inserted a huge 240-sq-metre lounger, called Textile Field, comprising Pantone strips in grey, blue and green carpeting - their hues complementing, but also lifting, the tones of the paintings in their gloomy, church-like setting. The carpeting was arranged on two vast, upholstered planes that tilted inwards, inviting visitors to kick off their shoes and spend some time sitting or lying there and gazing on these Renaissance masterpieces in a much less formal and constrained way than usual. Designer Jasper Morrison has described their work as “thoughtful and disciplined, with a real spirit and poetry”.

The Bouroullecs are intrigued by the idea of comfort – emotional, physical and psychological. They like to investigate and then facilitate how the body wants to be in the world. This might result in office furniture that cocoons and protects workers from the ravages of open-plan sensory overload (Workbays, for Vitra), or a range of domestic sofas and chairs that invite one to curl up and hibernate (Quilt, for Established & Sons). Phenomenological and philosophical investigations, inspired by the likes of Martin Heidegger or Maurice Merleau-Ponty, underpin every project, from vases for Iittala (a palette of lozenge-shaped coloured glass vases that work beautifully alone, but even better collectively) to their most recent exhibition, Rêveries Urbaines (Urban Daydreaming), currently on show at the Vitra Design Museum in Weil am Rhein.

Rêveries Urbaines is based on a year’s contemplation of possible solutions for cities, an antidote to the increasing dominance of cold, steel, glass or concrete edifices and endless tarmac. From this research, they created a repertoire of new forms that could be deployed to knit parts of our cities back into something more lovable or at least livable. They are displayed here, on the Vitra campus, within the tilting concrete slab walls of Zaha Hadid’s Fire Station, which provides the perfect setting for this series of three-dimensional sketches; it evokes perfectly the cold, comfortless, monolithic qualities of today’s urban cityscape.

About 20 skeletal metal tables are laid out, like pages torn from a large notebook, with a range of scenarios equally sketchily but charmingly rendered on their surfaces. Illuminated by skinny loops of warm LED lights, like miniature circus lights, these sketches are accompanied by a gentle soundtrack of chirping birds, buzzing traffic, honking horns and children. We are being placed in an imaginary cityscape with the lightest of touches – cardboard couples with dogs, skateboarders, playing children, appear among structures made of wood, moss, paper and ultra-thin metal chains. It is as if you could mentally superimpose any of these sketches on any cityscape, from Helsinki to Hong Kong.

Fundamentally, the pair are proposing ways to reintroduce nature and the elements into the concrete jungle, without necessitating any major infrastructural changes.

Vines (Lianes) is a chainlink structure supported by long masts, arranged along a street or a stretch of buildings, through which vegetation can twine and curl. Clematis, ivy or vines, it is suggested, should be allowed to “spread wildly between the masts, wandering freely along the tangled ropes”. Just imagine: being able to pick grapes while waiting for a bus …

Hanging Forest (Forêt suspendue) offers an arrangement of podiums above street level, on which trees and shrubbery flourish, varied in level and accessible to the public to explore as a raised walkway or network, or just to perch in quietly, above the hubbub, and enjoy.

These sketches argue for more variety in materials, a rebalancing in our overwhelmingly smooth, orthogonal, manmade environments to enrich our everyday materials and pattern. There should be room for natural stone, for water, as well as trees and plants. There should be informal shelters for retreat and respite, places to perch, which break up the grid of skyscrapers and roads.

Water is probably one of the quickest of light-touch enrichments. Here, it is proposed in several formats, but none of them as boring as the simple insertion of a pedestrian fountain. My favourite is Waterfall (Cascade), a series of masts linked by aluminium tiled chains along which water pours “like a sparkling chain of fish scales”. It pools in small ponds at the foot of each mast to be pumped up to the top and recycled. The surfaces give “tremulous reflections of the city”, offering an opportunity to pause and be still.

Water brings movement as well as light. But movement is also encouraged with their proposals, most notably with Turnstiles (Tourniquets): a series of rotating discs set in the ground, some might be planted, some might have a kind of pergola structure to shelter or percolate light. “Ropes extend radially from the top of the mast and visually intersect in motion … a game of optical vibrations.” They envision people walking along a nearby street suddenly mesmerised by the sight of people and plants slowly spinning, without effort, at street level. “As they turn, the city appears like an infinite panorama.”

And, of course, there is shelter. Shelter within the city is an incredibly important element – and one that is increasingly rare, unless you part with hard cash for drinks or services. Both standalone shelters are proposed - Kiosk (Kiosque), a large, informal pavilion, glowing from within; a place where things might happen – and smaller, more haphazard clusters of sheltering pergolas combined with rocks, allowing for seating or seclusion. There is one shelter idea that carries the stamp of a more evolved Bouroullec proposal: Cloud (Nuage) is a honeycomb of geometric forms placed above seats through which vegetation can grow. This semi-permeable structure will also generate pleasant dappling and shadows in sunlight – another element that our plant-free streets are robbing us of.

Finally, fire crops up, in an enchanting vista – Chimneys (Chemineés) – where gleaming metal stove tops, their chimneys spouting puffs of cotton-wool smoke, perch over hot braziers, around which people gather, warm themselves and commune.

The sketches themselves may seem flimsy and insubstantial, and there is no text to help the clueless (apart from a pull-out poster at the entrance). But clearly articulated, finished solutions is not what this is about. The experience of the installation is intended as a spark, a provocation, for people to take away and ponder, digest and appropriate.

Ronan Bouroullec, at the press launch for the show, explained that the initiative was born a few years back when the mayor of Rennes, in Brittany – where the brothers hail from – asked them to do a project in the city. Initially delighted at the suggestion, they soon realised that the challenge of adding something enriching and meaningful to a street or city was a far more complex problem than they had first thought.  He said: “We had a discussion with her [the mayor], and proposed to do a huge sketchbook, an exhibition like a sketchbook of research about what could be interesting in a city.”

The Bouroullecs, though acknowledging their lack of previous experience in urban design, know from past history that going into a topic about which you know nothing has benefits as well as disadvantages. After all, Giulio Cappellini gave them their first industrial design commission purely on the strength of their “disintegrated kitchen”, presented at the Salon du Meuble in Paris in 1997. Likewise, they knew nothing about interiors when Issey Miyake asked them to design a new space for his collection in Paris, in 2000, in response to which Vitra’s then chairman, Rolf Fehlbaum, asked them to come up with a solution for another area they knew nothing about – office design (and thus was born the Joyn range of tables and desks, which combines ergonomic efficiency with domestic elegance).  At the press launch, Ronan Bourroulec said: “I value this position to be quite naive in front of a subject. It has a lot of naivete in some of this research, but a lot of the (ideas) seem interesting and since this exhibition there are different cities that show an interest, from Miami to Aarhus in Denmark and Paris, too.” A commission may be in the offing also for Vitra’s extraordinary campus, which, over the past 30 years, has become populated by buildings (often the first in Europe) by Frank Gehry, Zaha Hadid, SANAA, Tadao Ando and Álvaro Siza. Something more organic, more chaotic, more spontaneous will surely be needed to knit such a disparate array of structures together. The Bouroullecs may have just the thing. 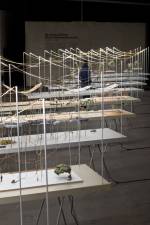 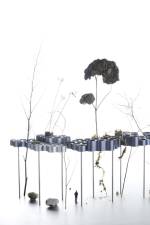 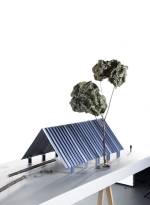 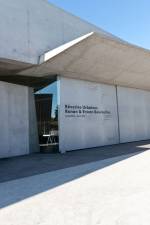