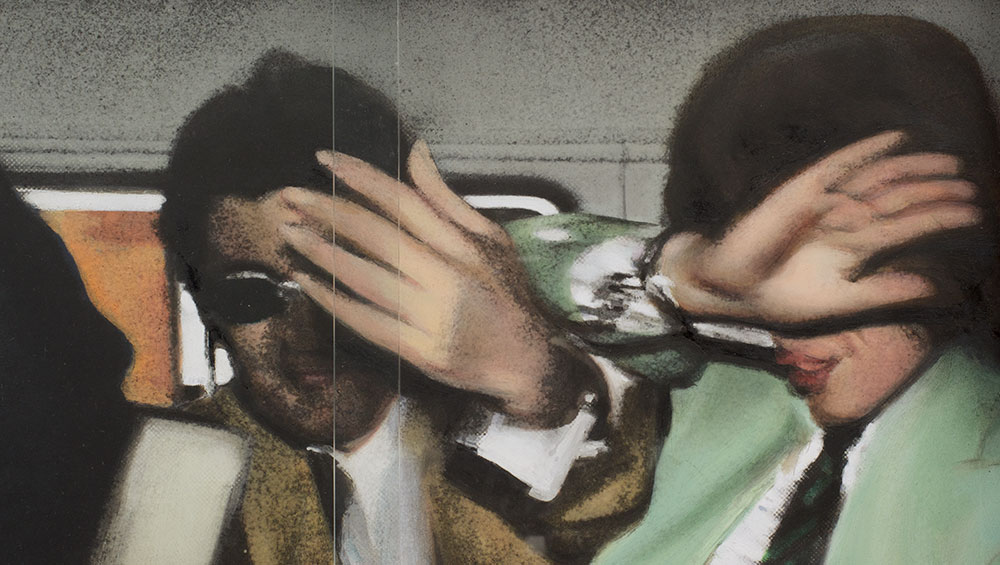 The reopening of Richard Hamilton: Respective at Pallant House Gallery is a real treat. It may be a small exhibition, but it is anchored around a number of key moments in Hamilton’s career and provides an opportunity to see some important pieces of work. Its other appeal is that it is drawn from the Pallant House’s own collection, largely amassed by patron and collector Colin St John (Sandy) Wilson and his wife MJ Long. The exhibition therefore also provides insights into individual collecting practices. The wealth of archival material is important, too, as it shares some of the correspondence between artist and patron and gives a glimpse of that relationship. It also maps out some of the landmark exhibitions that Hamilton took part in, but more of that in a moment.

Hamilton (1922-2011) trained at the Royal Academy Schools from 1938 to 1940 and, after military service in the Royal Engineers during the second world war, attended the Slade School of Art from 1948 to 1951. He became involved in organising pioneering exhibitions while still at the Slade. In 1950, he assisted with the installation of James Joyce: His Life and Work at the Institute of Contemporary Arts (ICA), London. He also designed the catalogue/poster for it, the earliest work in this exhibition at Pallant House. The story of other innovative exhibitions in which he was involved is included here, too: Growth and Form, with Nigel Henderson, inspired by the 1942 republication of D’Arcy Wentworth Thompson’s 1917 book about morphology, On Growth and Form, at the ICA in 1951; This Is Tomorrow, with John McHale and John Voelcker, at the Whitechapel Art Gallery in London in 1956; Man, Machine and Motion (1955) and An Exhibit (1957), the latter with Victor Pasmore and Lawrence Alloway, at the ICA and the Hatton Gallery, Newcastle. Hamilton taught at King’s College Newcastle, then part of the University of Durham, from 1953, initially teaching design and later the radical “basic course” he developed with Pasmore, commuting weekly from London to Newcastle for 13 years, until 1966.

The most recent work in the exhibition is Just what was it that made yesterday’s homes so different, so appealing? (upgrade), a digital print from 2004. This is based on the original collage work by Hamilton, Just what is it that makes today’s homes so different, so appealing (1956). There is also a related work from 1992 and these works come together in this exhibition to show how Hamilton’s early ideas and interests developed and sustained him throughout his career.

Hamilton’s relationship with the work of Marcel Duchamp resulted in one of his best-known works. In 1964, he was asked by the Arts Council of Great Britain to organise the largest European retrospective of Duchamp’s work, at the Tate Gallery in 1966. Realising the impossibility of staging such an exhibition without Duchamp’s The Large Glass (1915-23), which was too fragile to travel, he embarked on a year-long reconstruction of the work, using the notes provided in Duchamp’s Green Box of 1934, to which Henderson had introduced him in 1948. In 1982, Hamilton explained why he had chosen this approach, rather than working from photographs of The Large Glass: “To work from photographs isn’t satisfactory because much of the information, even at the straightforward level of fabrication, is lost. The alternative method, that of using the detailed documentation of the Green Box to cover the ground again – to reconstruct procedures rather than imitate the effects of action – was the one adopted.” His focus on fabrication and procedure here is not unlike his approach to exhibition-making.

While reconstructing The Large Glass, Hamilton made a number of studies, including Oculist Witnesses, jointly signed by Hamilton and Duchamp. The examples in the Pallant House exhibition are fascinating not only for the story behind them, but also for the materials used – silver mirror, laminated glass and aluminium – and for the way elements of those compositions and reconstructions return in later works, such as A Mirrorical Return (1998).

There are a number of Hamilton’s best-known works in this exhibition, too. Along with other members of the Independent Group that met at the ICA between 1952 and 1955, he was interested in flattening the hierarchies that existed, regarding design, advertising and popular culture to put them on an equal level with fine art. Between 1957 and 1962, he produced paintings in line with his own definition of pop art. Hers Is a Lush Situation (1958) is joined by a study for the same work from the previous year. Here, he draws on an article about the design of a 1957 Buick, collaging the lips of Sophia Loren with the movement of the car and New York skyscrapers reflected in the windows of the United Nations building.

Swingeing London 67 (1968) shows the gallerist Robert Fraser and Mick Jagger handcuffed together in the back of a prison van after being sentenced for possession of drugs. This draws on a photograph of the incident published by the Daily Sketch. Hamilton created a number of works on this subject, including a lithographic poster (also shown) dedicated: “For Sandy to read while waiting and painting.” Two years later, Hamilton turned to the Kent State massacre in the US, in which the National Guard shot at Kent State University students demonstrating against the Vietnam war, killing four of then and wounding nine others. He captured the image during an experiment in which he set up his camera in front of the television screen for a week. When the news of the events came on, Hamilton pressed the shutter release, reflecting at the time that the image has come “in one eye and out the other”.

This small exhibition tells the story of Hamilton’s artistic career, his interest in exhibition-making, his relationships with members of the Independent Group, his pioneering role in pop art and his friendship with Sandy Wilson. It includes some key works by Hamilton and fascinating archive material. Catch it before it closes.