The award was given to the architects of the new Scottish Parliament, the late Enriq Miralles of Barcelona, his partner, Benedetta Tagliabue, and their associates in Edinburgh, Robert Matthew and Johnson-Marshall. The award announcement was made on 15 October 2005 before a jubilant gathering of the architectural great and good, seated in the 19th century masterpiece, the Royal Museum in Edinburgh. There seemed little surprise in the destination of the Prize, other than that of Pritzker Prize winner, Zaha Hadid. On reflection, her reaction was indeed well justified. This is a professional award, and should reflect not only superlative design standards, but also the most exceptional standards of 'best practice' that the architectural profession can demonstrate. This is an award that must carry a message to the lay public, as well as an example to architects. While the design quality can always be debated, and will continue so to be for a century and more, the quality of professional and budgetary control was, by all accounts, utterly lamentable.

It is the architectural profession that is here found wanting: why were there no resignations? The departmental and parliamentary 'clients', too, found it not any longer to be an issue, as they settled into their stylish, idiosyncratic building complex. This is not some kind of architectural Turner Prize, where artists are not expected to display any actual professionalism other than to stay this side of obscenity laws and fire regulations. But the total disappearance of the budget question from the jury's criteria in Edinburgh is seen to be a glaring example of the further distancing of the architectural profession from the public they must serve. As Peter Wilson, an important commentator and critic working out of Edinburgh as Editor of the journal he founded, Manifesto, claimed, 'It shows the architectural profession very distanced from the public, in so far as they are prepared to say that it doesn't matter what a building costs, or how long it takes to build. That is wrong'. One Independent Member of the Scottish Parliament, Margo MacDonald, said, 'The committee who award this prize are not the people who will have to explain to the Scots why the maintenance, running, and repair costs of the Scottish parliament are going to be so big'. 'Say little and say it well' might be a cautionary warning to the newly ensconced Parliamentarians. But it makes a mockery of the premise and principles of the building that they occupy.

The fact is that the Award choice ignored a handful of outstanding buildings, mostly executed with great professional skill and superlative design talent, mostly within their set budgets, reflecting enormous credit on the firms involved, and all showing a conscious awareness of the true aspirations of the various classes of users within these buildings. Will Alsop, typically and pleasurably, when discussing his multicoloured Fawood Children's Centre in Harlesden, stated unequivocally that architecture had to be 'fun'. There can be no fun by contrast in enthusing about a building of profligate expenditure, claiming to enhance the landscape (which it doesn't), nor creating 'poetic' spaces that inspire the Parliamentarians with their own self-importance. Why could they not spring off the fence, where they sat like the pigeons entangled in the curious window architecture, and take a stand against the accelerating flow of their electorate's funds? This does not augur very well for the proper execution of future budgetary measures on behalf of their electorate over health, education, or communications. Sun King, this is your world, that of the profligate tour de force.

Norman Foster has already twice received the award, last year, for the famous 'Gherkin' tower in the City of London. The Foster entry this year was for a building that houses the various production facilities for McLaren Formula One cars, plus product laboratories, design studios and staff facilities. The building seems to float gently in the flat Woking landscape, reflected coolly in its own ecologically sound waterscape. The smallest entry this year, the Lewis Glucksman Gallery, by Irish architects O'Donnell and Tuomey (previously also shortlisted), stands for quality on such a modest scale. The Brighton Jubilee Library, by Rab Bennetts, is an inspiring example of contemporary architecture at its well-managed best: here, too, there is poetry, inspiration, materiality and proficiency, a model for the new generation of architects now emerging from the schools. Which cannot be said for the Alban extravaganza below Arthur's Seat in Edinburgh. Finally, one turns in some exasperation, to Zaha Hadid's model works for the BMW Central Building at Leipzig, which should have won, in the view of a large number of professionals.

What of the future of this prestigious award, named ten years ago in honour of perhaps the greatest British 20th-century architect, the late Sir James Stirling? It will, of course, continue, but more exacting criteria now need to be worked out, on a level playing field, where each building must subscribe to certain basic rules that lie behind the probity of the whole profession of architects. Here, it is doubly disillusioning this year, to remember the great skill of the late Enriq Miralles, in bringing architecture and landscape together as one: the Igualada Cemetery, outside Barcelona, is one of his early masterpieces, completed with his former partner Carme Pinos. This building nestles within the landscape and embraces subtle planting, like an oasis between life and death, welcoming the cycle of time itself. How will the Edinburgh Parliament be regarded in 100, 200 years time? Can it do other than provide the anomaly of history unmade? Will this fundamentally flawed building continue to be the recipient of ill tidings, of malevolent fatality? Will devolution here played out, actually survive, or will the Scottish ship of state not flounder, like their 16th-century flagship, the 'Great Michael'? There can be no guarantees: 'Say little and say it well'. 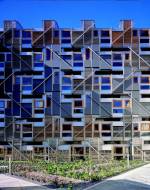