This exhibition is the artist's first solo show in the UK, and takes place under the aegis of Paris Calling, a season of contemporary French art showing in galleries across London, Oxford and Margate. The exhibition has travelled from Paris, where it was shown in the Palais de Tokyo's Musée d'Art Moderne de la Ville de Paris, and has been reconfigured for its Tate appearance.

As visitors enter the first room they are confronted with a white neon sign reading 'I do not own Tate Modern or the Death Star'. This 'disclaimer', as Huyghe calls his text pieces, signals a refusal of the notion of ownership of ideas, together with an interest in forms of mass popularity such as film (Star Wars), and indeed the amusement park that the exhibition's title suggests. The sign also relates to a 1997 work in which Huyghe inserted a diagram of his childhood bedroom into a blueprint of the Death Star, and thus suggests that even the artist's past work is not owned by him. It is taken on loan from the culture at large and will return to that culture.

The next room expands on this theme. It features a short film, which records the image of a Japanese manga character being lit up in fireworks and then fading away. In fact, Huyghe bought the rights to this character's image from a cartoon agency, and then gave it away to other artists to use. Sending up the character in fireworks was a final act of cremation for an empty body. A poster on the opposite wall juxtaposes the cartoon face with the message, 'no ghost just a shell', with 'shell' represented by the multinational oil company's logo. This references Shiro Masamune's popular graphic novel Ghost in the Shell, in which a person's mind or 'ghost' defines their humanity in a future age of cybernetic enhancement, and suggests that global capitalism, epitomised by the Shell logo, has reduced the character to an empty token of exchange. As the other works in this exhibition attest, it is through celebration, performance, and ritual that the shell is reanimated and freed.

The walls of the next room are also lined with disclaimers: 'I do not own Snow White; I do not own Modern Times; I do not own 4'33'. Between these multivalent messages and the viewer dance a pair of huge doors, slowly revolving around each other on sinuous tracks bolted to the ceiling. It is possible to walk between and around the animated furniture as it performs its ballet, and watch Blanche Neige Lucie, a four-minute film about Lucie Dolène, who played the voice of Snow White in the French version of the Disney film. In an interview, relayed on subtitles so that we have to give it voice ourselves, Dolène relates her successful legal struggle with Disney for ownership of her own recorded voice. Meanwhile, Dolène faces the camera and sings a song from the film - a performance in which she freely gives her voice away, taking on the guise of the cartoon character once again.

This is not a time for dreaming (2004) is the first of Huyghe's complex longer films to appear in the exhibition. Harvard University commissioned Huyghe to create a work commemorating Le Corbusier's Carpenter Center, commissioned by the university in 1959 but not completed until 1963, after the architect's death. Huyghe's response is what he calls 'an exhibition in the form of a puppet opera':1 the parallel stories of Le Corbusier's and Huyghe's struggles with the institution are relayed through puppets and a musical score. But the film occasionally cuts to a wider shot in which the heads of the audience watching the film of the opera are shown, and also includes real-life shots of the small, organically-shaped theatre Huyghe built under the legs of Le Corbusier's building, as well as an introductory speech for the Harvard screening by a member of the university. This is a film of the showing of a film of a puppet show that performs the struggle between individuals and bureaucracy. The labyrinthine complexity is reinforced by a scene in which the puppet Huyghe is shown operating a puppet version of himself, before the camera cuts away to show the 'real' Huyghe operating the puppet.

Huyghe declares an interest in the Ficciones of the seminal Argentine writer Jorge Luis Borges with the disclaimer 'Fictions ne m'appartient pas'. The next film, A journey that wasn't (2005), owes more than a passing debt to Borges's interest in 19th-century adventure stories, and to his philosophical obsession with time and the 'eternal return'. The film tells two stories: it documents Huyghe's journey to the Antarctic to verify the rumours of a new island and a white beast that lived there (an albino penguin, as it turned out), and it records the performance, on an ice rink in New York's Central Park, of an opera that translated the island's topography into sound. In performance, the white icebergs are rendered black, lit from above by sodium lights, and a robotic penguin (a shell without a ghost) makes an appearance. In the documentary, the wide, mysterious landscape dwarfs the yellow-suited figures clambering over it, and the weather fills the screen. A delicate balance is drawn between the collaborative effort of the opera, epitomised by dry ice drifting through massed cellos, and the loneliness of one man in a rubber dinghy motoring through sea ice. Huyghe calls the remaking of narrative in the parallel versions of documentary and opera 'a case of bifurcation',1 associating them with the forking paths of Borges's stories.

The exhibition is indeed a celebration, a space for Huyghe to explore the possibilities that sociality offers, whether he is asking fellow artists to submit ideas for a new day of celebration or drawing on the mass popularity of the fairy tale to create a ritual pageant for a new town in the film 'Streamside Day'. As the critic Nicolas Bourriaud notes, 'Huyghe has asserted the work of art as a zone of activity, a form filled with human interactions and economic, political and social phenomena'.2 The result is Celebration Park: a compelling and well-executed work in the form of an exhibition. 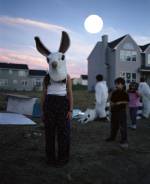