“Picasso?” When Salvador Dalí was asked about his fellow artist he supposedly quipped, “Picasso is a painter, so am I; Picasso is a Spaniard, so am I; Picasso is a communist, neither am I!” This anecdote was revealingly chosen by the Spanish Ambassador to commence his speech celebrating the opening of the exhibition Picasso: Peace and Freedom at Tate Liverpool.

Equally revealingly the show's co-curator Christoph Grunenberg responded by insisting that Picasso far from being a “fellow traveller” as the ambassador had suggested was not only a full-time member of the French Communist party but also it's main postwar sponsor and spokesman. This show being part of a “campaign to change the image of Picasso and get him recognised as a political artist”.

Between these two viewpoints lies the ripe if not moot subject matter of this exhibition, Picasso’s political engagement from 1944 until his very last years and indeed his specifically Communist affiliation. His membership of the Party is of course a matter of fact, a fact loudly trumpeted as a major propaganda coup by the Party itself when he joined in that year. The ambiguity only comes when trying to judge from the evidence of this exemplary exhibition whether such politics had any direct influence on his actual work, whether there is a “communist Picasso” in the sense that there is a “Cubist”, “Neo-Classical” or  “Blue Period” one.

A third speech by Nicholas Serota declared that “Tate Liverpool makes exhibitions, doesn't take them”, which is abundantly clear by the scale, ambition and serious scholarship of this exhibition, one which is deliberately not coming anywhere near London but going on to such prestigious venues as Vienna’s Albertina and the Louisiana Museum in Denmark. Indeed the “politics” of this gesture are impressive in themselves, the show having been originally conceived and then co-curated by Lynda Morris, based in Norwich and director of the proudly local global arts festival East International. Likewise much is rightly made of Picasso’s 1950 visit to Sheffield rather than London for a “Peace Conference”, a radical regionalism, a decentralisation, which is inherently subversive.

One of the most interesting rooms in the show is a sort of central-generator of documentation and ephemera, posters, photographs, flyers and newspapers, even printed headscarves, which demonstrate the extent of Picasso’s commitment and his willingness to lend his name, and his hand, to promoting the cause. For as Morris makes clear in the indispensible accompanying catalogue the sheer amount of money, art work and time Picasso gave over to the Party has never previously been so well documented, a revelatory factor which thanks to this show will no longer be able to be downplayed. The issue of whether, morally, that makes Picasso more or less of a monstre sacré is left somewhat aside, though it remains unclear why such full-hearted support of an acknowledged tyrannical mass-murderer as Stalin still never seems to involve quite the same stain of shame as, say, similar devotion to Hitler or Pol Pot.

And that said, to try and stress the political Picasso rather than the bon vivant playboy, the lover of young women, the wicked satyr, the wealthy and world famous celebrity, the waggish and often anarchic individualist, seems pointless. He was all these things, and many more, at the same time; his practical everyday politics perhaps best summed up by that wise line, “I'd like to live as a poor man – but with lots of money”.

But naturally what the paying punter wants to see, especially if they have travelled from all over Britain or even Europe to see this show in Liverpool, is not archival documentation but cracking great art works, truly important paintings, masterpieces, key drawings, unforgettable sculpture and sketches. And by discretely expanding the initial thesis of the show to encompass really just “Postwar” and even “Late” Picasso in general, this has been resoundingly, abundantly achieved.

Thus whilst The Charnel House is both one of his key paintings of the period (and not seen in Britain for 50 years) it is also entirely within the remit of the curatorial concept as an overtly “engaged” political work.

But the same could not perhaps be said of some lush decorative paintings of the South of France, included because of their “peace doves” or very late and very sexual paintings that supposedly, improbably, reflect some sort of acknowledgment of “feminism”. There are several flagrant examples of such curatorial shoehorning, for example a painting of a lobster and cat doing battle, which even though created in 1965 supposedly suggests the Cuban missile crisis of three years before. Similarly his series of variants on Le Déjeuner sur l'herbe are included just because Manet was a radical involved with the Paris Commune and Picasso was himself, it is claimed, interested in the “politics of youth and sexual liberation”.

Most notably his versions of Las Meninas are presented less as riffs upon Velazquez than parodies of the pomp of Franco’s court, “a cruel indictment of Franco’s dictatorship” complete with torturers “meat-hooks” which may or may not be there.

But isn't that what an exhibition is meant to do, not just presenting wonderful works for our aesthetic delight (always the first requirement surely) but also stirring things up with new ideas, fresh proposals, a different approach, cheeky slant, to the entire fixed history of art?

The success of this show is precisely that both curatorial obligations operate so strongly simultaneously. One could walk through the exhibition absolutely ignoring its thesis, blindly oblivious to its thematic development, not reading a single wall label at all, and emerge refreshed and revived by a vibrant survey of some of the best of Picasso’s postwar work. Or one could devote oneself to closely studying, debating, opposing or concurring with the didactic argument presented on the real place of politics in Picasso’s practice, working with the new information and revelatory scholarship displayed in order to reassess one’s entire view of his life and oeuvre. 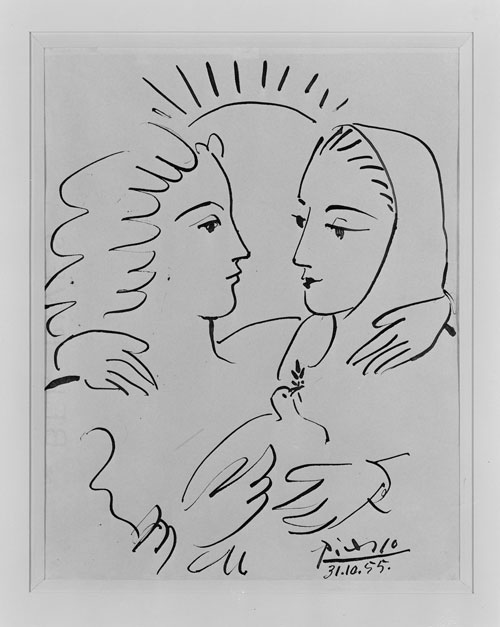 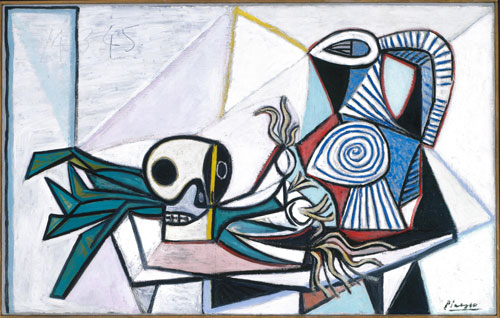 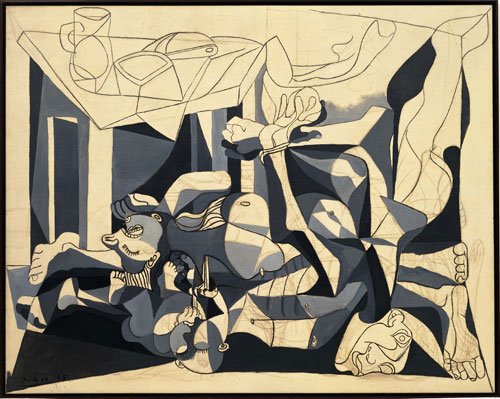