Jane Austen claimed she could never recall if France were in Paris or Paris France, and likewise considering the magnitude of both gallery empire and artist’s reputation, one might make the slip of saying, “Have you seen the Gagosian exhibition at Picasso yet?” Quel awesome combo! The world’s uncontestedly most powerful art dealer with lavish spaces seemingly in every city and the equally uncontested greatest, and most expensive, artist of the 20th century whose auction records just keep inching higher, by an extra million or so, into the stratosphere.

Although Gagosian had already mounted a comprehensive academic show in London of Picasso prints, La Minotauromachie: All VIII States, the real coup came with the appointment of John Richardson as “international adviser” in 2008. His organisation the next year of an exhibition of Picasso’s Mosqueteros in Manhattan proved an unprecedented succès fou, with long queues waiting in the rain on opening night as if to conjour the artist himself by such devotion, as if Picasso were somehow involved himself, present, a living part of this exhibition. This, of course, is due to the magic of Richardson’s presence, the magisterial official biographer who knew well the master throughout his postwar years to the extent that meeting him can seem, by association, almost an audience with the great man lui-même.

The enormous success of this late Picasso show, critical and popular, was made all the more poignant for taking place in a commercial gallery with the attendant ambiguity of what actually might be for sale, should one be the right person asking in the right manner. But significantly the most enthusiastic response came from art students and younger practicing artists still untouched by such issues. And now comes this second show, devoted to Picasso’s “Mediterranean” years, 1945–62, those when Richardson first met and knew him best, pitched as the summer blockbuster for London’s vast Britannia Street barrack.

The tone is set on entry with a large and saucy, comic even, ceramic amphora literally “painted with slip”, a bright yellow bikini dramatically lit within a mirrored alcove which allows one to observe the sexy buttock crack behind. Bikini refers to the invention of the garment and also, in turn to the atomic bomb tests on that atoll from which its name derived, but that is as close as the show comes to the “political” Picasso, concurrently to be seen at Tate Liverpool. Indeed the pleasure here is to see an exhibition which covers the same period of time but which is entirely devoted to the sunny, hedonistic, physical pleasures of the South, the very opposite of the committed Communist engaged with important issues of the era.

The richness of Picasso’s oeuvre, its attraction for curators, is precisely that possibility of making a specific thematic show on almost any aspect, period, of the work, which will prove unique. And if this work does not carry the breathtaking punch, the punky energy and aggressive “badness” of Picasso’s still controversial last stylistics (and even if London audiences take for granted free entry to major exhibitions unlike New York’s institutional ticket charges) it still could not make for a more delicious summer show.

The gallery space is so lofty and beautiful, its polished concrete floors and soaring walls so pristine, and its air conditioning so delightfully refreshing, that the muggy reality of the sweltering King’s Cross back streets entirely vanishes to be replaced by optimum viewing conditions. This crisp, wonderfully cool room temperature is in itself an actual tangible pleasure (and one whose practical cost might plague any lesser dealer) and doubtless as good for the works as for their viewers, as are the beautifully chosen colours for some of the walls, not least a rich dark blue of regal tonality. Yes, it is all utterly “piss elegant”, almost too chic for its own good, and the very opposite of Picasso’s own chaotic and wonderfully creatively messy quarters at the Villa Californie, whose blasting August heat untouched by AC one can almost sense emanating from the paintings themselves.

The transmutation of Picasso’s rich everyday ephemera, the fecund mulch from which his masterpieces swelled as if organically, into revered and expensive museum objets is particularly notable here. For some of the most delightful things on display, folded paper tear-out doodles, rough miniature clay figures, are as if scooped from filthy studio floor to spotlit vitrine. One example might be a little 1953 bird in a cage, even with actual salad, presumably not of the era, whose charm is complete with an art-historical echo of Duchamp’s Why Not Sneeze?, a petite work presented inexplicably high on a shelf, almost the only fault to be found with the show’s installation, proof if it were needed of its cool perfection. Likewise a rough door on which Picasso daubed some “anatomie féminine” is here presented with a reverence that recalls the Beyeler Foundation’s current exhibition of Basquiat, in which spontaneous fun becomes sacrosanct.

There is so much here, in almost every media imaginable, an embarrassment of riches which happily lays as much emphasis upon Picasso’s sculpture, ceramics and 3D works as upon his painting or drawing, and which as a result is one of those rare exhibitions in which sculpture is allowed to take centre stage and comes to dominate the works hung sedately upon the walls.

More discrete than any museum no collector’s names are mentioned either upon the walls or in the voluminous and exemplary catalogue. Richardson naturally has unprecedented access to Picasso’s immediate surviving family and it is has been deliberately “leaked” that most of these works come from the clan, in order to make them all the more desirable. Yet suitably chicly everything is listed as “Private Collection” apart from two works from MoMA, whilst the Vallauris poster dedicated by Picasso in red pen “pour John Richardson” mysteriously does not appear within this book.

If dealers love Picasso because he is unique in having been so consistently prolific, protean, whilst remaining so expensive, the real lesson of this hugely enjoyable exhibition is that everyone has their own reason for admiring his oeuvre and existence, and there are as many different manners of presenting them as media he mastered. 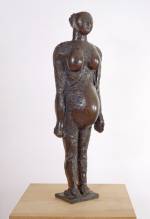 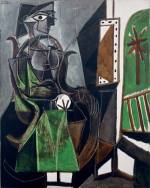 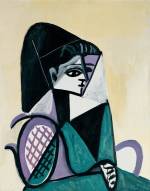