Despite passages of naked voyeurism, the Tate’s blockbuster intoxicates with passion, power and the pleasure of unbound creativity

Towards the end of November 1932, Marie-Thérèse Walter – the exercise-obsessed 23-year-old muse of Pablo Picasso (1881-1973) – nearly drowned in a kayaking accident. Due to the rat-derived filth in the water, she contracted an illness that threatened her life and caused the temporary loss of her luxurious blond hair. Galvanised by fear, her lover retreated to his studio and painted The Rescue, a rhapsodic image of her prone body being plucked from the water by her own doppelgänger. 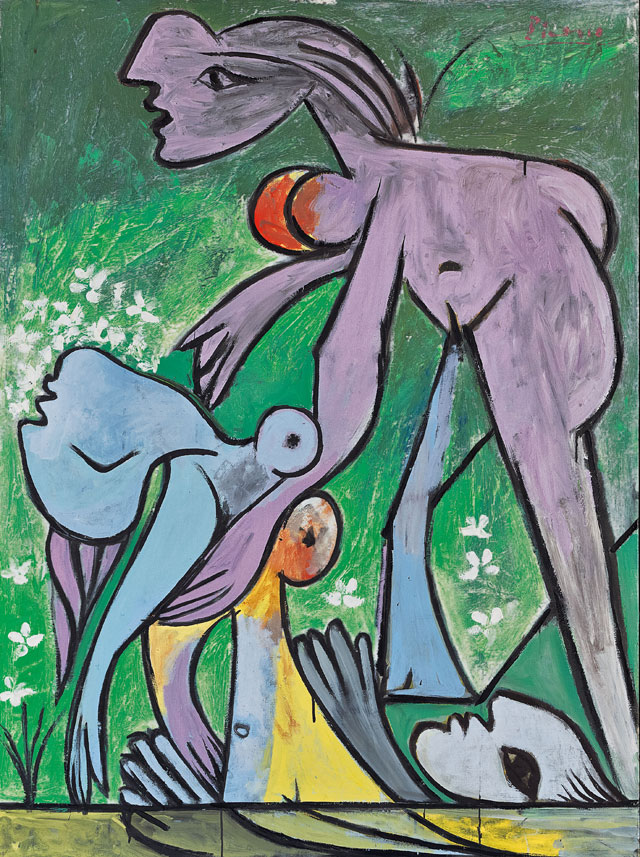 Further pieces, painted over subsequent weeks, transform this scene into a mute dance of abstracted, almost architectural forms, and insert it within a tableau of beach games. Each is at once terrified and ecstatic, and rapt with palpable feeling – a trait that was often absent from the great artist’s more cerebral output in the preceding decade. And each demonstrates a restless need to explore the potential of painting. For Picasso’s relationship with Walter was probably the most creatively fecund of his long life. It stands as the central thread of the Tate Modern’s stupendous exhibition Picasso 1932: Love, Fame, Tragedy, which meticulously follows the artist’s progress throughout, give or take, a single year.

Picasso had met Walter in early 1927, when she was only 17. “You have an interesting face,” Walter later recalled him saying. “I would like to do a portrait of you. I feel we are going to do great things together.” Educated, but disinterested in art, she was convinced only after the artist took her to a bookshop and showed her catalogues of his work. During their first sitting in the summer house in Walter’s mother’s garden, Picasso scrutinised her from head to toe, mentally recording her appearance; he almost never worked with a model. From the beginning, he strove both to formulate a pictorial language able to express her – or his – idealised form of her, while keeping her identity concealed from his wife Olga. In 1931, he hid Walter in sculpture; a bronze example at the Tate has a bulging, almost avian nose. A painting from the same year, Woman in a Red Armchair, has her faced rubbed out in a blur. 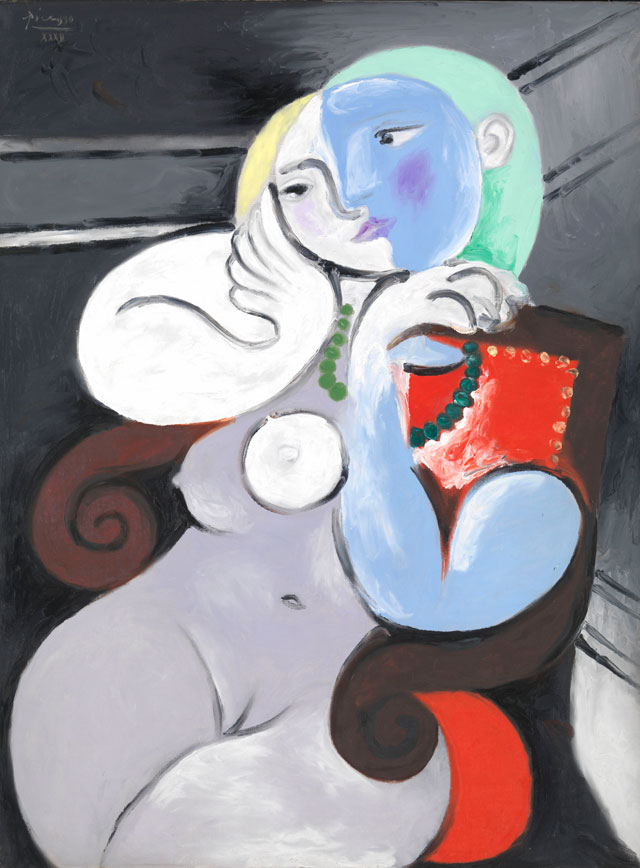 It is hard to know what changed with the new year; Picasso had enjoyed private relations with Walter at his country house in Normandy since 1930. But something did change, and the first few months of 1932 saw a remarkable flurry of portraits, 100 or so in total, selections from which make up the core of the Tate exhibition. They are in the main astonishing, rolling out in a tumult of breathless invention. From a few elements – a chair, a diamond-patterned wallpaper, fruit, flowers, leaves, a bust of Walter and Walter herself, either seated or recumbent – Picasso conjured wonder after wonder. 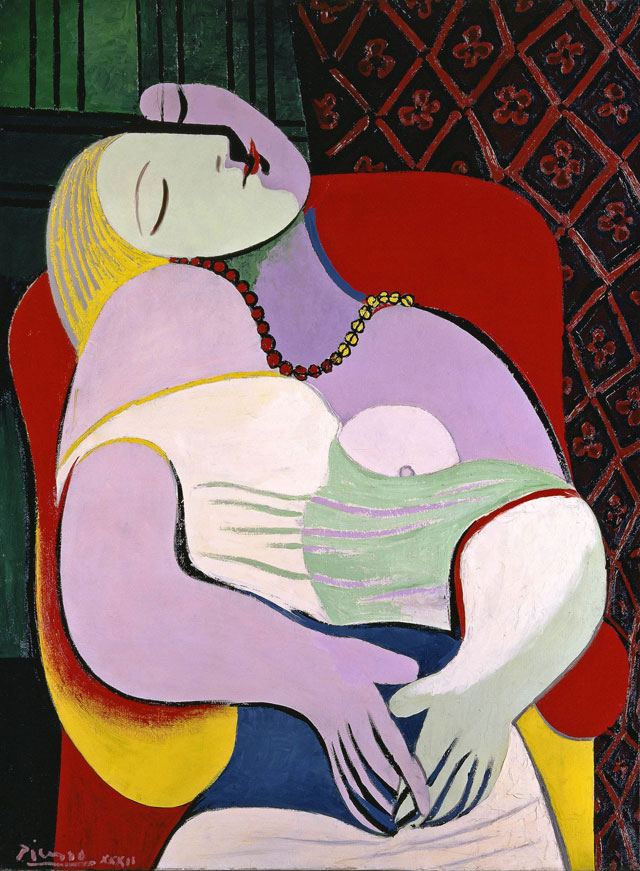 This miraculous outpouring began, on 2 January, with the completion of both the surrealist composition Figures by the Sea I and Reading. Here, Walter’s head becomes a lilac heart, and she stares forward tenderly, her body smoothed into bright shapes. A week later, he imagined her reading again, but this time fallen into reverie. Her form is so lissome here it might float away. In between these two, he also found time to capture her more crudely as a cartoonish pile of soft blobs, her distinctive nose becoming a penis-like protrusion. Walter is stripped painting by painting, with results that can seem voyeuristic to this contemporary eye.  On 23 January, Walter sleeps, and Picasso has her head loll back on a red parapet; on the 24th, she dreams, and Picasso turns her face and clasped hands into genitals, embedding his desire into her. 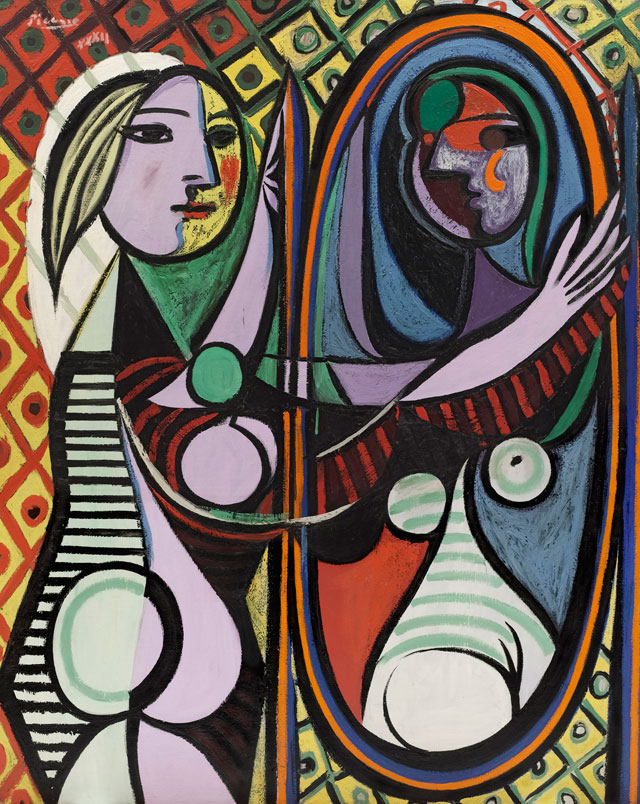 February was quieter, but, in March, Picasso regained his stride. A set of six masterworks, produced in 12 days, represent an apex. First, in Still Life with Tulips, we have a noble, almost Grecian bust of Walter, garlanded with a floral coronet. Midway through the set, Picasso introduces the recumbent form of Walter herself, which becomes the focus for two more paintings, until the final piece, Girl Before a Mirror, has her gazing into a penumbral reflection of herself, as if creating her own image. Each of these canvases, with their thick black lines and a simplified, elemental language, seem beamed from a magical realm of passion and pleasure. 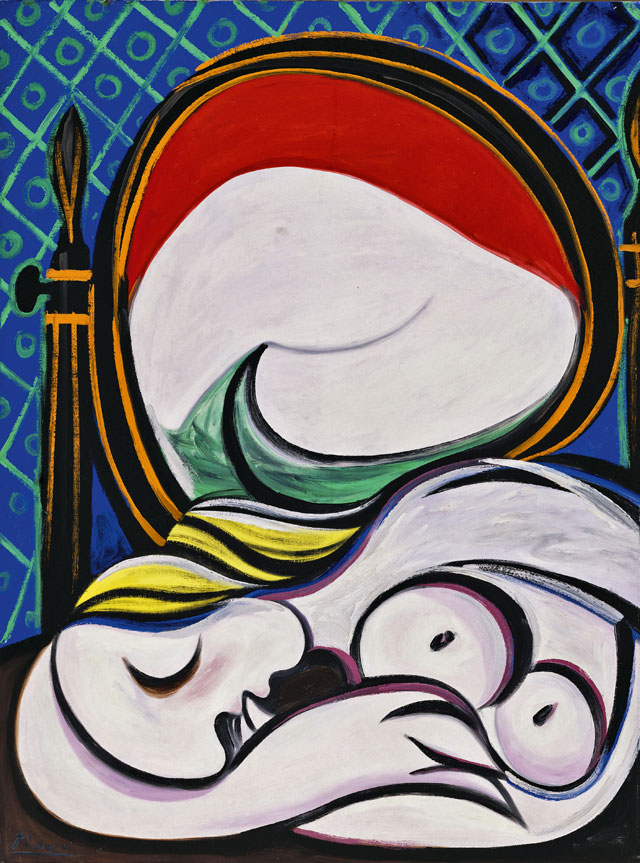 In The Mirror, the penultimate of the sequence, Picasso succeeds Diego Velázquez and Édouard Manet in masterfully deploying reflection. Whereas these two used mirrors to capture the front of their subjects, however, Picasso singles out Walter’s bared rear. Walter herself, lying before this apparition, has been reimagined as some sort of writhing deep-sea creature, a cephalopod fixation that culminates in early April’s sinister Reclining Nude. Here, her rapturous face is snagged at the end of a six-pronged octopus (a hexapus?) with breasts for eyes. One of her, or its, arms is daubed with a forbidding vermilion smear.

This period represents the year’s pinnacle, and one of the pinnacles of Picasso’s polycentric oeuvre. By May, he was busy in Paris mounting his own retrospective, which had a celebratory private view on 16 June at Galerie Georges Petit, as well as collaborating on the first volume of Christian Zervos’s catalogue raisonné, still the definitive guide to Picasso’s immense body of work. When Picasso did paint, however, he caught some of the same fire. Few paintings are as silently elated as Sleep of 18 August, a bucolic vision in blue, green and violet that relocates his knotted, tentacular renditions of Walter in the open air. A trip to Colmar produced an exemplary set of 13 ink drawings modelled on Grünewald’s Isenheim Altarpiece (1512-16), which blend agony and solemnity with bleak wit. 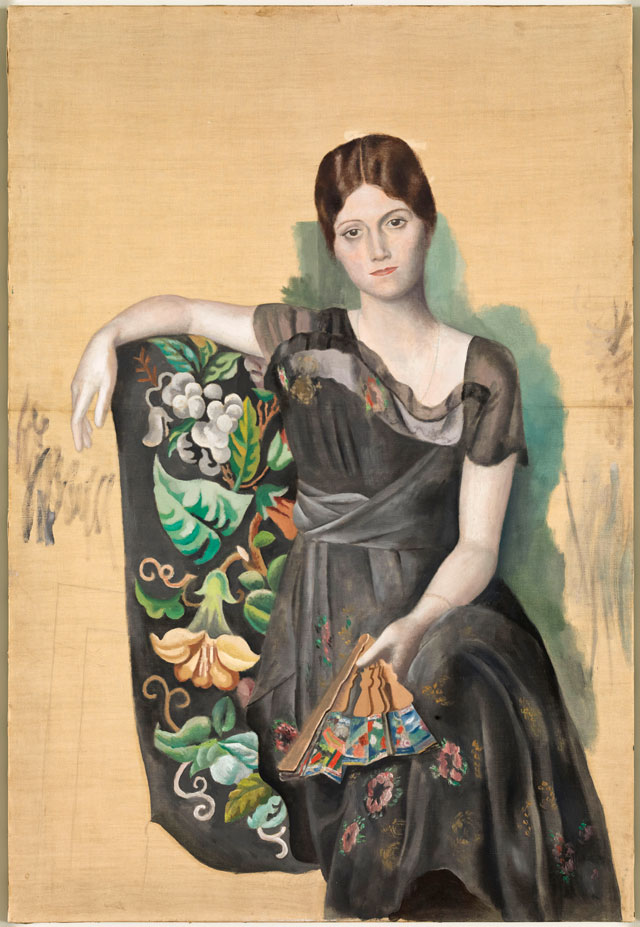 Picasso would not have approved of this exhibition’s chronological arrangement nor its willingness to narrate the intimate details of his personal life. At Galerie Georges Petit, he arranged 238 works in a strictly atemporal order, mixing and matching pieces from more than three decades of practice. A fragment of this show is recreated at the Tate, showing the startling juxtaposition of portraits from his blue and cubist period with a straight-off-the-easel Sleeping Woman by a Mirror. One display centres on the captivating Portrait of Olga in an Armchair (1918) from his neoclassical phase, which has his wife serene yet firm, both contented bride and assured society hostess. In Paris, this arrangement told the world that the artist was a respectable family man, which, by this point, was far from the truth. 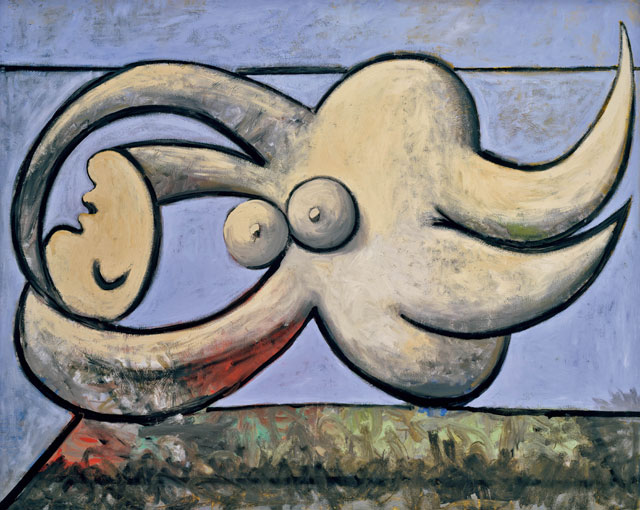 The artist’s more recent portrayals of Olga, from only a few months before this show opened, are the bracing product of a relationship in free fall. Woman with Dagger, finished inappropriately on Christmas Day 1931, has a streak of brutality redolent of Alberto Giacometti’s near contemporaneous Woman with Her Throat Cut (1932). Modelled on David’s Revolutionary masterpiece The Death of Marat (1793), it has Olga deformed into a grotesque, yowling, insectoid demon. She is stabbing another figure – either Picasso or his lover – in the heart, so that crimson ribbons of blood ooze out. A similar abomination fills the psychoanalytically inspired Rest from 22 January 1932, which has the Olga-monster straddle a chair whose lurid colours resemble those seen through a heat-seeking camera. Deft as these works are, they emanate a toxic aura, fuelled by resentment.

Walter may have been Picasso’s consuming muse in 1932, but she was not the only one. It is a matter of regret that the show does not include his portraits of his now nameless Japanese model, whom Picasso’s biographer John Richardson has identified as the subject of several works of the time; she disappeared after Olga stumbled on her and expelled her from the house. But it feels petty to fixate on omissions when this exhibition is cornucopian in riches. By narrowing the focus, the Tate Modern has avoided the fatiguing overabundance of some of its larger-scope retrospectives. The result is taut and concentrated, hit after hit. As troublesome as some of Walter’s mutations are, I left this exhibition intoxicated. 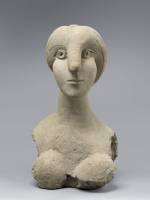 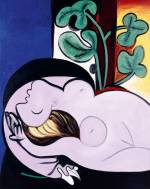