Barlow’s art is genuinely challenging. The stacks of timber and cemented detritus spattered with paint, frozen between creation and destruction, fulfil her aim of turning the gallery, and our experience of it, upside down

A commonly held view of modern art is that it sought, in all its varying forms, to overthrow the primacy of beauty. To reactionary critics, cubists were barbarians, colourists were wild beasts and expressionists were neurotic vandals. Others went further and claimed that modern art wasn’t art at all. What they were doing was exposing the narrowness of their conception of art and, indeed, beauty. They were also betraying the critical weakness of their position in an inevitably changing world. They were like fools laughing at steam engines.

Navigating around Phyllida Barlow’s exhibition at the Fruitmarket Gallery, Edinburgh, I felt like one of those anti-modern critics, with the words “Is this art?” emanating from the reptilian part of my mind. One of the reasons those dread thoughts arose is that Barlow’s art is genuinely challenging; a much overused term but highly appropriate here. Set doesn’t conform to what an exhibition should be. Indeed, it has the effect of questioning, chaotically and powerfully, the silent code of decorum, and the penitential aspect to the traditional gallery; akin as it is to the Stations of the Cross and approached with the same kind of hushed restrictive reverence. Set points out that there is no need for things to have turned out like this. Why should art be pilgrimage, worship, submission? Our very view of art is the hangover of the decisions, preferences and prejudices of those who came long before. Against this backdrop, Barlow’s intention is explicit: to “turn the gallery, and our experience of it, upside down.” The title might imply a film set or that art, its purveyors and audience are stuck in our ways. These are deconstructed and reconstructed in Barlow’s work, where ambiguity and collapse is as heavyweight a presence as assembly.

The idiosyncratic sprawl of Set is as much the artist’s work as the art itself. It is a chaos that slowly unmasks itself.  At first, the lower gallery seems transformed into a building or even bomb site. It is as if we have interrupted not only the creation of the exhibition but the building of the gallery itself. Gradually, like eyesight adjusting to darkness, shapes and intentions begin to emerge. A carefully arranged, almost suprematist stack of timber, cemented detritus spattered with paint and arranged like memorials or votives to some ancient forgotten religion. It seems to simultaneously mean nothing and a sort of elemental everything.

What seems formless and nameless at first is eventually identified. Despite seeming like flotsam (perhaps all art is the retrieval of worth from nothingness), each piece has a name and a name with a hint of the functional. Some are bluntly so (“boxes”, “barrels”, “small rack”). Some are more mysterious. What structure did “broken column” once belong to? What action did “contraption” once perform? Other titles are even more cryptic and their histories and meanings secret – “dunce”, “caro”. We are left to imagine, which is a crucial part of Barlow’s art. It jars because we are used to this process in familiar digestible forms – an oil painting with a distinct frame, an installation you can walk around. Here we have the unforeseen totemic power of construction materials recontextualised. Their frame, the setting aside conventionally involved, is obscured. It is art that dares to look unlike art, to highlight impulses of imprecision and incompleteness. Yet there is an eloquence here even in the most haphazard of pieces. They are as the artist chose them to be. It is an appointed chaos that makes us reflect on what order actually means, not just for the viewed but the viewer.

Despite their titles, the individual pieces feel like a whole (or emanations of something much larger), not just in spilling over into each other at times, but in the sense of sharing similar palettes and textures. They are like the collective wreckage from a singular event, prehistoric or post-apocalyptic. Barlow has taken assemblage into the creation not simply of objects but environments. This is achieved in a tactile rather than narrative sense. It obstructs as much as it immerses. In the upper gallery, the audience is confronted with art as obstacle. Again, you struggle to make sense, searching for clues (“Why this? Why here?”), but you end up, guided by Barlow, asking whether rational sense is the important objective and not something else, experience perhaps or something more ineffable.

It may seem puzzling that Barlow has referred to her work as “anti-monumental” given that it consists of great hulks of concrete and wood, and manipulations of space. It does, however, try to forgo the ego, as much as that might be possible. There is nothing immaculate or self-consciously edgy here. It is not built to last. There are no great declarations or illusions. It asks as much as it confronts, preferring mystery to statement (despite our initial qualms that it might be a ruse). Where it most effectively connects is in the small partially concealed annex, which turns a simple walk-in space into a different world with a glimpse and an instruction not to enter.

This is a puzzling and problematic exhibition, necessarily so. It calls to mind, not anti-art, as we might be tempted to suggest, but those wordless interrogators of art (who had vastly different styles from Barlow and each other) such as Marcel Duchamp, Jackson Pollock or Yves Klein. It is not, however, a tacitly intellectual exercise, but one of feeling or rather feelings plural. Barlow is a brave artist, another overused but apt term. As a teacher and practitioner for five decades, it’s safe to assume she knows every trick and safe harbour within art and yet she abandons them for an art that is daring and exposed, an art that courts many emotions, way beyond mere admiration. Some might mock that it is the emperor’s new clothes but the emperor cannot be accused of a lack of courage.

In an exhibition frozen between creation and destruction, we gaze both at wreckage and building blocks for meaning. There is something here, pushing through the paint and the concrete, that is vital; mysterious enough to be called poetry but arguably too visceral and conflicted to easily qualify, without the measured delicacies that characterise much of the poetic. It is ugly (in parts), disordered and highly questionable, and in exploring and evading the tyranny of meaning, it is approaching the very essence of art. 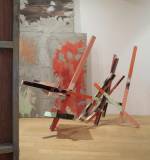 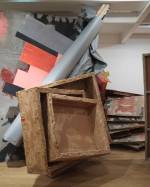 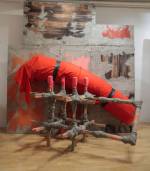 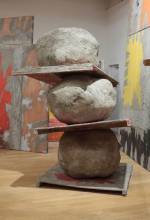 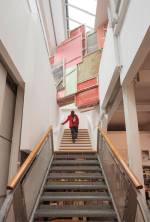