Phoebe Unwin (b1979, Cambridge) is a British painter exploring the boundary between figuration and abstraction. Her paintings are responses to memory through spatial arrangements and colour. In her latest body of work – 10 oil paintings that make up Field (2018), on show at the Collezione Maramotti in Reggio Emilia – each canvas evokes a particular mood or memory: the arrival of a body; the feeling of ascent; departure at nightfall. I meet Unwin on the opening night of the exhibition, her first solo show in Italy, which takes over the Pattern Room, a ground-floor exhibition space in the former factory of the Max Mara fashion house, whose founder, Achille Maramotti, gave his name to the collection. On the floors above hang works by – predominantly male – masters of 20th-century painting, from Gerhard Richter to David Salle. In the library below, Unwin and I talk of pictorial space, resisting the canon, and painting as a kind of care.

Izabella Scott: The Approach (2017) is the earliest painting in the series, and you describe it as the jumping off point for all the rest. How did it come about?

Phoebe Unwin: The Approach was the first large-scale painting I’d made since 2015. There, for the exhibition Distant People and Self-Soothing Objects at the Amanda Wilkinson Gallery, I’d made a series using airbrush and India ink, in which I’d started to explore a different kind of pictorial space and a different kind of relationship with the figure. Those paintings have the feel of the photographic, even though they have nothing to do with photorealism. The idea was capture, and the images grew by matching each image with the speed of the airbrush mark. With colour, I wanted to find a way for the colour to remain, in some way, itself – so that there might be expanses of colour, but those colours would remain just that red, just that blue, just that off-white. 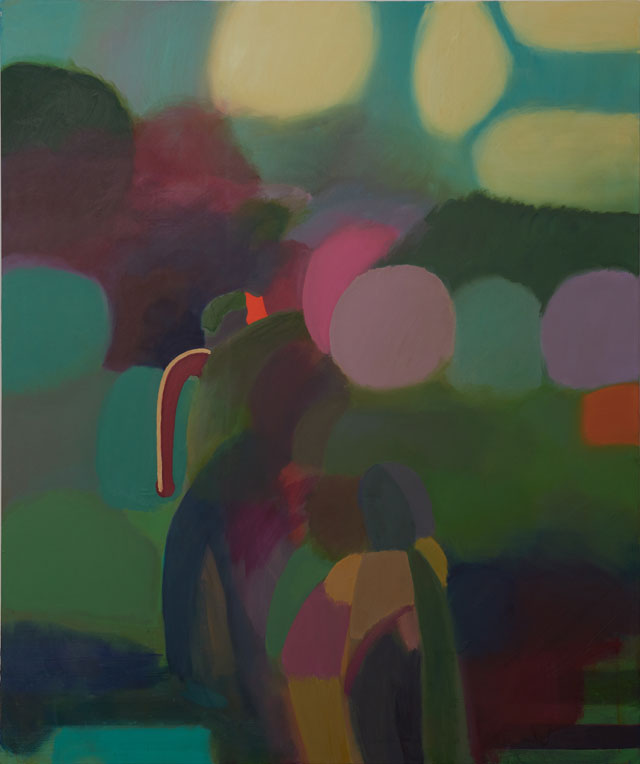 IS: So, the paintings are about pictorial space itself?

PU: When I made these paintings, I was responding to colour, or thinking through paint. Developing the series took well over a year. I would work on perhaps three canvases at a time, partly because of the size constraint of my studio, but also it was practical. Oil paint takes time to dry. There might be one day when I put a long purple curve on a painting. I want to look at it, so I wait for it to dry and start another. In this way, the paintings respond to each other or are interwoven.

IS: You paint from memory. Do the 10 paintings come from the same event? Is there a continuity between the memories?

PU: No, it doesn’t quite work like that. Each painting is its own event. I’m interested in different moods. For this series, I began with a coloured ground. I chose the colours quite intuitively, so one canvas has a cream ground, another was completely mustard yellow, a third was completely black. Then I worked on top – and this is what I mean by responding to colour. In terms of memory, rather than thinking about the same event, I’m thinking about the same kind of space – a particular open space, what I call a “field”. 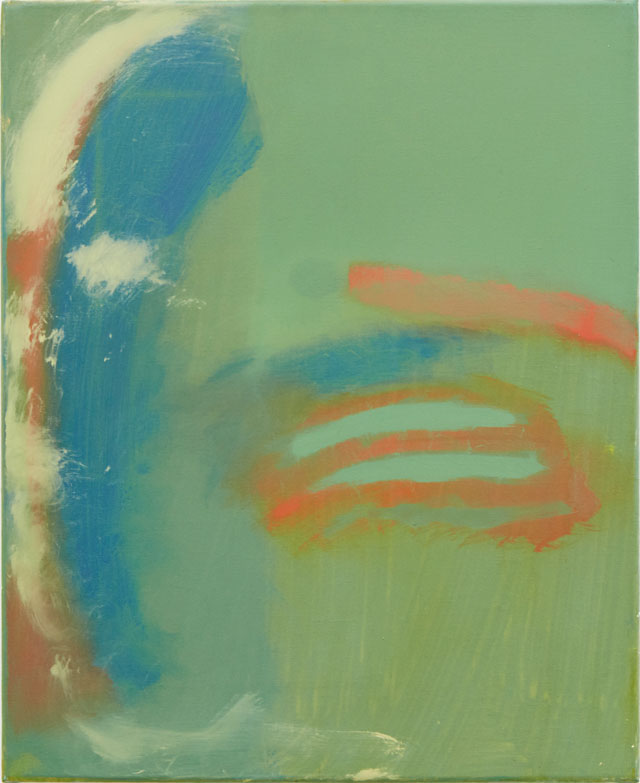 IS: To return to The Approach, it is an abstract work made up of forest greens, teal and mauve, but it is possible to make out two blurred figures, an encounter. Then, at the centre of the picture is a red bar that is completely in focus. Is this pictorial object a kind of key to the painting?

PU: For me, painting has its own logic, and thinking through colour is also thinking through structure. The Approach is about a feeling, or encounter, but it’s also about pictorial space. I think of the bar you describe as an arm that brings a sense of tension to that part of the painting; it has a solidity that the fluffier shapes around it don’t have. When I say an arm, it’s not an arm made of flesh necessarily, but an arm that is full of a certain intent. But there are figures folded into the painting, too. The memory I’m accessing is something quite specific – the moment of seeing before speaking, a very visual moment of recognition, of feeling the presence of somebody else, and the way this leads to a tension in your body, a subtle jolt, where you pull back. That’s the moment of in between-ness that I’m trying to capture. 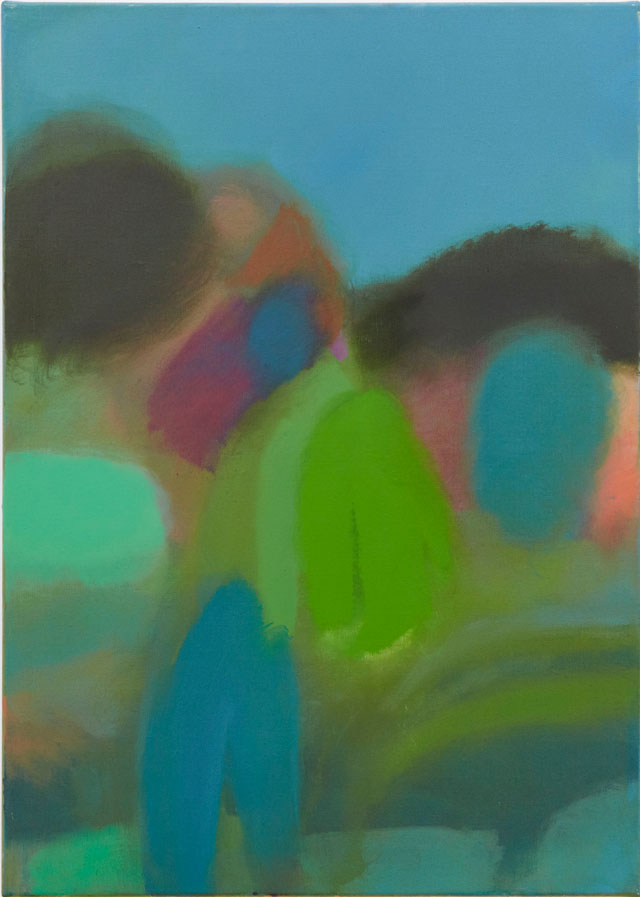 IS: In Diverted Pedestrian (2018) and Small Figure (2018), it is possible to make out murky figures, but it might be the titles of the painting that draw out this reading. How do you negotiate this boundary between figuration and abstraction?

PU: Figures are part of the space – they emerged within the colours and forms. I like to hint at figures, because they bring in an idea of scale, and they also pull the viewer into the painting – I hope. I find the boundary between genres an exciting place to be, and I want these paintings to sit on the border. They are not rooted in a particular time or place or action, but they are glimpses. 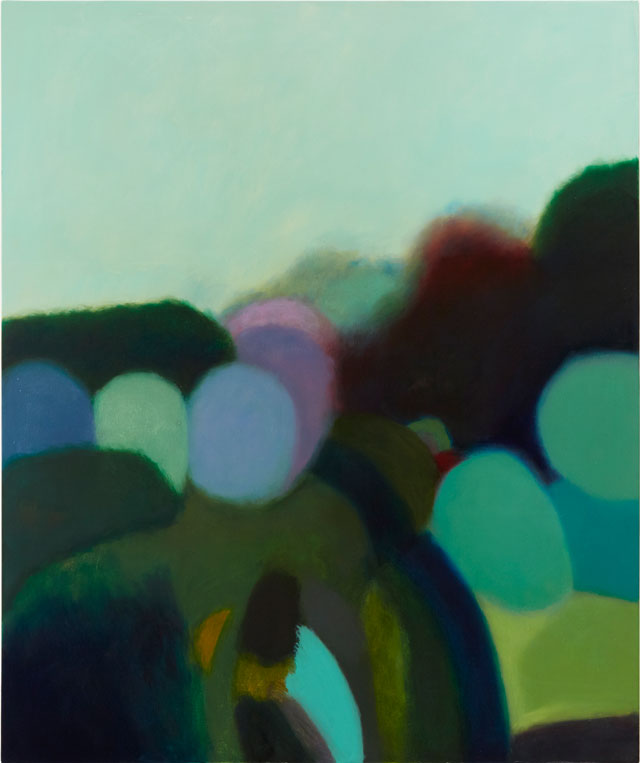 As part of my practice, I’ve often begun by working in big sketchbooks to compose my images – like painting on paper. It’s something I do with great speed, adding layers of colour over time, using every kind of drawing material on top of coloured pages. But with these paintings, I didn’t work in the same way. Rather than rehearsing form or planning the paintings to come, I wanted to save the colour decisions for the event of painting itself. Instead, I used the sketchbooks to play out different kind of atmosphere, and to explore this notion of passing through a space – of something or someone not being rooted to a space. 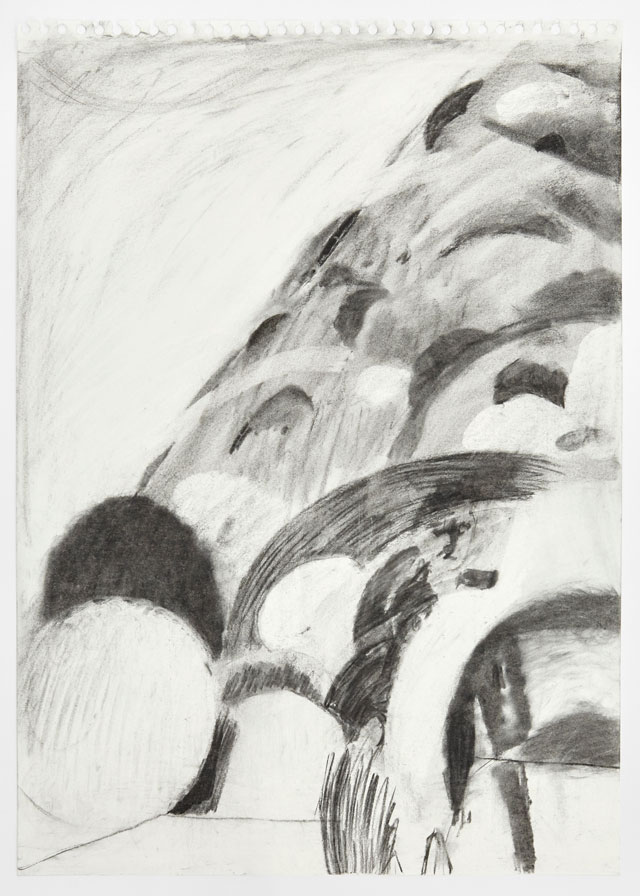 IS: Are the sketchbooks a kind of crutch? Do you feel you have become more confident?

PU: In part. It’s about becoming familiar with paint, colour, oil – how it sits on the canvas. Painting often requires a combination of intuition and technique. On the one hand, I think of how I’m structuring a painting, or bringing visual clarity in terms of mood, atmosphere or tension. At the same time, there is instinct at play. That’s one thing I love about painting, which is also part of its difficulty: there is so much skill, formal composition, but at the same time, it’s not something that necessarily has a clear outcome. There is freedom and constraint at once. 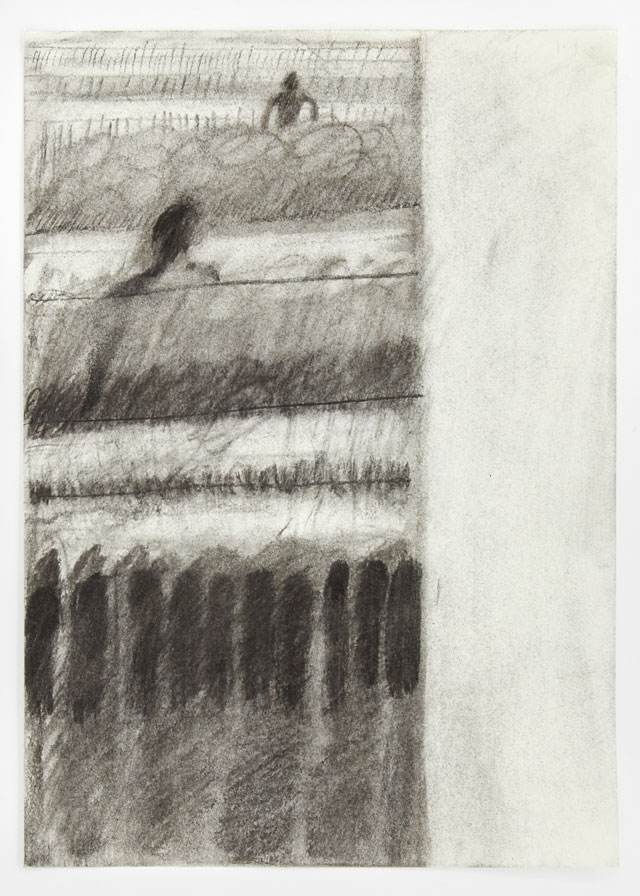 IS: Are you looking back to other painters?

PU: No, the opposite! I love looking at paintings – they change how I see the world. And, of course, there’s the residue of all the paintings you’ve seen. But I like to trust myself. I want to put the history of painting to one side, if I can. I never want to do any direct quoting, or align myself with a certain group or movement.

IS: It reminds me of something you have said before, about your paintings being in the present tense. Perhaps in the same way, by not plugging yourself into the historical canon, it allows you to work in a discrete chamber, perhaps in a tense of your own.

PU: I want to find a presentness, but also a relationship between movement and stillness. I’m interested in capturing different speeds – which can be the speed of mark, the use of blur or translucency. And I never want to cut myself off from the canon entirely, and there is always the echo of other tenses in my work. The timeframe for this series of work was quite unusual. I began The Approach in 2017, and it also led to another series, Pregnant Landscape (2018), which are related to Field, but are perhaps tilted more towards the figurative. I completed these paintings in May this year, and it was from that point I began the work for Field. They came quickly, and I made them over an intensive period, but they are also tied back to this older painting, The Approach. I have never used a single painting as an entry point before – it’s very new. But it was exciting to make so many paintings at once, moving between them, finding moments of contrast or affinity. 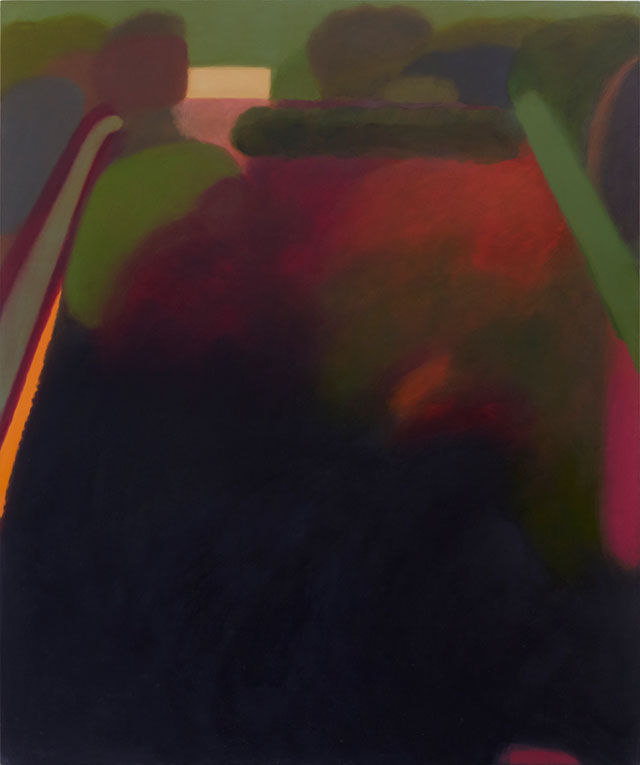 IS: Nightfall (2018) and Sunstretch (2018) hang side by side, almost like a diptych, one full of the dark purples of dusk, the other the pink and lemons of sunrise. Do you think of them as a pair?

PU: I did in the hanging! I’ve always loved making this jump from one range of colours to another, as a way of evoking very different kinds of space. My paintings often respond to each other in the event of making. Sometimes, I will work on a set of canvases for weeks; at other times, I’ll work on just one for a few days. I give each what I think it needs; I’m bringing them up with different speeds of painting. 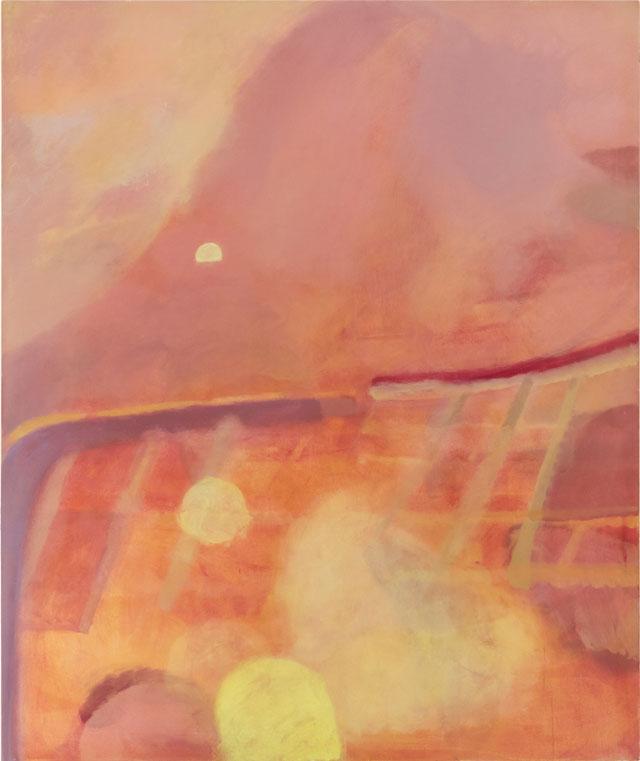 IS: In your description, the paintings are suddenly anthropomorphised – they feel like these little creatures that you give care to. Is it hard to know when you are finished, when they have matured?

PU: That takes the longest! It’s quite a slow process of deciding, yes, that’s finished. I need to have the paintings up around me. Over the course of a few weeks, I will look at them, live with them, thinking: no I don’t want to add any more. It’s only during the hanging that I see these paintings together for the first time – because my studio is not big enough. Up until now, I’ve only seen a few at once, so the hang is also a kind of reveal. It’s a moment of clarity. In my studio, there are a lot of paintings that didn’t make it, all these possibilities – paintings that I’ve started and stopped, ones that never got brought to life. Only once the show has been put together, when it’s finally hung, do I have a sense of closure.

• Phoebe Unwin: Field is at the Collezione Maramotti, Reggio Emilia, Italy, until 10 March 2019. 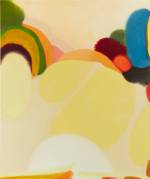