The esoteric books and games we are involved with here are those which one cannot do anything with. The books are books by virtue of having their pages bound together; the games are games because this is what they are called by their makers.

'Computers', said Jack Heller, director of New York University's Institute for Computer Science, 'will produce new Renaissance people. Ever since the Industrial Age began, we have been fragmenting our knowledge into specialized fields. Once we have worked computers into all fields of humanities and sciences people will have an immense new variety of knowledge and this will lead to new correlations and new concepts.' Heller was referring to the Museum Computer Network which, under the direction of Everett Ellin, will eventually correlate data about art objects in the various museum collections throughout the States. The information explosion about which so much has been written, and which has been welcomed by researchers and others involved in rationalizing and analysing objects and events, has had one notable, if small, repercussion which one could only describe as rather sad. The decline of knowledge as a privilege, and as something rare and special, has led a number of artists, writers and other creative people to seek an esoteric area for their activities, which would of necessity be so personal and incomprehensible that the information about them would never reach computer storage data. Their discoveries would never become a common currency, if only because the key to their understanding would not be available. This sort of preoccupation does not necessarily represent a conscious stance on the part of the creators; it is simply remarkable because it is an accomplished fact of which those on the receiving end are becoming increasingly and frustratingly aware.

It is in this context that I want to mention a number of games and books—made, contrived or designed in the past few years—which belong to this esoteric category.

I am not concerned here with the various objects which have some connecxion with art and are extremely attractive, e.g. puzzles made up of Jackson Pollock paintings, chess pieces by Man Ray, playing cards by Sonia Delaunay, or various puzzles, blocks and other three-dimensional diversions which must be dismantled and then carefully re-assembled. All these are utilitarian in so far as one can spend time and achieve some satisfaction in putting the elements together to make a whole, or play a game of rummy with specially designed cards. Nor am I referring to books made by artists in de luxe editions of which every page is an original print, with the size of type face and price of folio setting them apart from other books; nor those books in which painters practise concrete poetry and poets try to make their texts visual; nor, finally, those where pages are cut up and a variety of heads, bodies and legs can be assembled at will to form some hilarious effigy.

The esoteric books and games we are involved with here are those which one cannot do anything with. The books are books by virtue of having their pages bound together; the games are games because this is what they are called by their makers. Among books which defy any process of reading or even sequential looking-through are some of the books by Diter Rot. One, for instance, is a bound volume of rejected printers' off-prints and proofs; another consists entirely of black and white cut-up pages.

In his series called Quadrat-prints, Peter Brattinga published one of Diter Rot's books. It consists of 60 loose-leaf pages, each of which is a blow-up of a small section of the Daily Mirror. Diter Rot himself wrote about it as follows: 'They are part of a group of books I made in the year 1962 out of a bunch of DAILY MIRRORS—
'. . . INSTEAD OF SHOWING QUALITY (surprising quality)
WESHOW QUANTITY (surprising quantity). I got this idea (Quantity instead of Quality) in this way:
'QUALITY' in BUSINESS (F.i. advertising) is just a subtle way of being Quantity-minded:
Quality in advertising wants expansion and (in the end)
power = Quantity.
So, let us produce Quantities for once!'

The Italian artist Bruno Munari also collaborated on a Quadrat-print. This one consists of white and red pages of high quality paper, which are of different sizes, some of them having been cut and others folded. 'But what are these "unreadable" books?'—says the introduction in eight languages—' They are books without words, books with pages cut in different manner, with pages of coloured paper. A book like this is folded in this wrapper—by turning over the pages you can compose and decompose many geometric patterns and, if you like you can put some of them under glass and change them later....'

Among other unreadable books is the one by Manzoni which consists of layers of thick film material, which in such density has an extraordinary mysterious colour; another is a volume by Wolfgang Schmidt entitled O.P. The book doesn't exist—it is what it says it is, out of print.

One of the more reserved and even more puzzling efforts in this direction is a book by Herman de Vries published by Edition Hansjörg Mayer in 1967. This small 250-page volume is entitled Wit (followed by the German translation Weiss). The pages are white and entirely empty. The einleitung (introduction) is a blank page signed by J.C. van Schagen, and the only text is provided by the publisher who carefully guards the copyright by stressing both in German and in English that 'no part of this book may be reproduced in any form by print, photo-print, microfilm or any other means without written permission from the publisher'. The edition is 500.

What is interesting here is that the idea is enough. It isn't necessary to see the 250 blank pages once you know that there are 250 blank pages. There is no extra information which the object itself conveys over and above the idea. Once you know that there are a number of possibilities to be attained by combining shapes of red and white paper in the form of pages, the first combination gives a fairly good idea as to the scope and limitations of the object. It is simply not necessary to look right through the book. Somehow the books don't communicate enough, either as part of their esotericism because the message is so cryptic, or simply because their authors, mostly artists of considerable achievement, do not feel the necessity to say anything more than a hello and leave it at that. There is also the possibility that the audience—the reader, the owner or the borrower—are being given quite deliberately a carte blanche to fill in with their own imaginings.

The games which come into the same sort of category present a slightly different problem. I have in mind three games by George Brecht, which far from being empty or minimal, present the player with a puzzle which may be no easier to solve than to read Herman de Vries' Weiss. One is a deck of cards, each card different with black and white drawings ranging from small geometric patterns juxtaposed with acrobats and dancers to drawings of lemons, bulbs, taps or fish. The deck of cards is one of a number of Fluxus games for which the players invent their own rules. On spreading out the 52 cards any prospective player would spend many hours trying to figure out what possible methods could be employed in order to have a game with 52 totally disconnected images. The cards are objects which invariably are looked at and then put down.

In the series of games and puzzles by George Brecht, one comes across a number of well-made transparent plastic boxes with varying contents. In the case of the Black Ball Puzzle, for instance, the box is divided into seven separate compartments and contains one large red ball, two smaller black balls of different sizes, and a tiny pale blue ball. Inside an instruction card says: 'Change smaller black ball into larger and larger black ball into smaller. Make both black balls the same size.'

There appears to be no specific aim or message motivating the non-books and non-games. They are not an insult directed at the world, they are not a joke, and they are not a decoration. They are not an art statement, but a statement of attitude, and all the objects demonstrate this in different ways. What they share is their recent arrival on the scene, i.e. since the beginning of the 1960s, as well as a lack of any justification or manifesto that would comment on their purpose. To me they represent a grasping at privacy. It may seem to be a nihilistic attitude, but one which is not entirely surprising. The increase in communication media can result in the dilution of content; and to some the prospect of doing research with the aid of computers seems analogous to acquiring a knowledge of literature through a digest. It is not so, but it can look frighteningly like that at times. The empty books on the one hand, and the phenomenon of easily accessible information on the other, represent, to me, the two emotional polarities of a single development. At the moment they seem irrevocably interdependent. 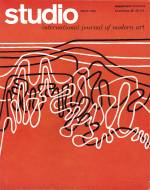 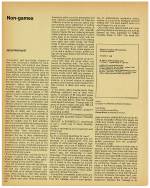 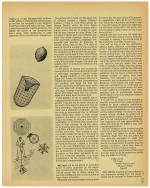 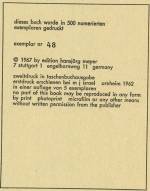 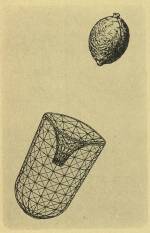 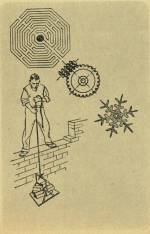