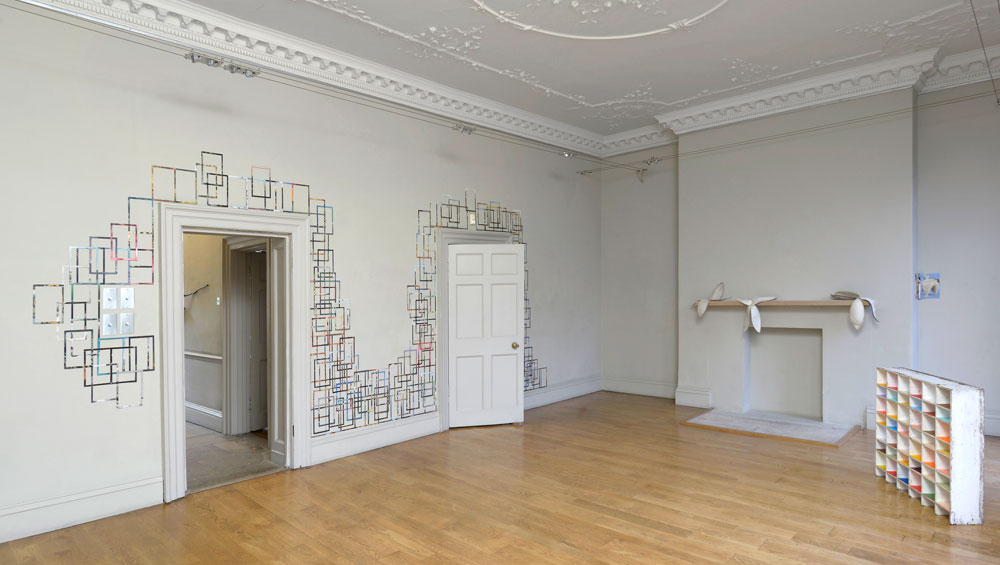 Nicky Hirst’s work has a wicked, deadpan humour that brings to mind Martin Creed. But Hirst’s humour is deployed as a subtle and consistent intellectual strategy, with few slapstick eruptions. She is up there with Cornelia Parker in her ability to render sculptural material and space as a form of drawing. And as a photographer, her eye for poetic detail in the most banal of settings rivals that of Wolfgang Tillmans; something that has garnered this thoughtful, 54-year-old artist the privilege(!) of a massive following on Instagram. But the real beauty of her work is that it is less about presenting you with a resolved conceptual statement and much more about setting off your own personal train of intriguing associations, seeking answers to questions she probably hasn’t even posed.

Recently much in demand as an architectural collaborator, she has returned to her first love, sculpture, for a solo show at Domobaal Gallery, London. She inhabits the elegant Georgian architecture of this Bloomsbury townhouse with a series of installations, some site-specific arrangements of existing work and some new pieces made for the show. As with all her work, serendipity looms large, with arrangements of found and crafted elements that detonate small explosions of visual, social and emotional connection within the crucible of our imaginations as well as between the works, and often with the very walls that surround them.

There are weirdly beautiful, dissected rugby balls, displayed as flower-like adornments on an extemporised mantelpiece (Trophy, 2017). The real, albeit empty, fireplace cavity below it seems to echo with what is absent, in the same way that these disembowelled playthings make a display of their bladder-free detumescence. Their pale, luminous interiors – marked only by a maker’s pencil strokes in one, a water stain in another – are all the more evocative in the context of the dirt, sweat and blood that will have assaulted their tough outer casings. What is missing resonates powerfully with what is present, in all her work.

Nearby sits a scruffy shelving unit with flaking paint, a cast-off from the bygone, pre-email days of internal mailrooms. Its forlorn, decommissioned countenance has been transformed into a vision of fragile loveliness thanks to a rainbow of endpapers sliced out of hardback art books and inserted into the mail slots (Endgame, 2017); a eulogy, perhaps, for the bygone era of paper-only communication.

But let’s not get to the main course before we have savoured the starter: these works are displayed in the grand, first floor drawing room of this 1730s house, restored to its Georgian proportions by gallerist Domo Baal two decades ago. The first work of Hirst’s that we meet (if we disregard the humorously reassembled anagrams of her name and show title, displayed, Fawlty Towers-style, in slight disarray, by the front door) is an eccentric parade of placards; lined up like so many umbrellas, they are an odd but sympathetic assembly. Although they clearly share a purpose, their meaning is baffling. What could this collection of incongruous items be protesting about or promoting? But the materials, shapes and textures are so oddly seductive that you can’t help but dwell on their possible myriad messages.

A twin pair of cymbals (Nocturne, 2010) mounted on one pole is strongly suggestive of breasts – but is that only because it is placed between a placard topped with pulped contemporary newspaper fashioned into a vaguely phallic wedge (Translation, 2010) and a drooping skipping rope, whose gently nestled, round handle-tops (stems removed) suggests balls (Flail, 2011)? And is it this sneaky undercurrent of innuendo that turns a nearby skein of fly-repelling metal curtain chain, hung from a horizontal bar (Standard, 2010) into a Scheherazade-style veil behind which one could easily imagine someone conducting a saucy dance? And why does that corrugated sepia lampshade, mounted sideways on the furthest right placard (Frill, 2015) suggest not illumination but, simultaneously, sunflowers and loudspeakers? It brings to mind a comment from Francis McKee, director of Glasgow’s Centre for Contemporary Arts, on Hirst’s ability to “(turn) away from certainty and knowledge to reveal the almost invisible human and natural traces”.

These placards are single artworks, whose grouping, under the title Into the Woods (2010-2017), was inspired by this particular large and welcoming, quasi-domestic entrance hall. Over the years, many of Hirst’s findings have been turned into placards, she says, united by their potential to “look like they could be paraded, like something is wanting to be said, but they are not necessarily legible”. This grouping needed to be here, she says: “because of this hall, [where] I could imagine a clutter of lacrosse sticks … and all the things that just get shoved in the hallway - umbrella stands and hat stands. They might be ready to go or have just come back in. Domo calls them refugees. I like that. I find them very sort of Edward Gorey – like his creatures, they are quite solemnly standing, patiently waiting for ‘it’ to happen. I do personify them. And in different combinations they say different things.”

Many artists work with found things, but Hirst conveys a truly remarkable richness and multiplicity of meanings through her groupings and placements. Around the corner, at the foot of the stairs, is a zingy red circle in shiny, veneered wood, its rim outlined in yellow. It sits framed by a strong grille of black metal. Looking like a flag (Japanese, obviously), a heraldic symbol or a logo, it appears wholly complete as a shiny “object” in and of itself. But the red disc is from a child’s table that Hirst found in the street, where she also found the grille - which is, in fact, a hob from a classic 1930s New World cooker. Only she would think of putting that hob and the Japanese flag-ness together to call it New World (2017).

Up the stone staircase, with its ornate 280-year-old cast ironwork and polished wooden handrail (kinked and curved to look as if it had just been picked up from the forest floor), we find one of the simplest and most eloquent of pieces: a cheap, warped (and clearly useless) wooden shelf, on which a long and undulating stick is balanced; the convex curves of stick and shelf cracking a sly smile. Both are painted dense grey, in graphite paint. Drawing for a Sculpture (2017), Hirst calls this, tongue firmly in cheek. The banisters demanded its placement here, she says, but so did the buckling of the ancient wall, its hairline plaster cracks setting off another, vertical response to the stick’s gentle undulations.

Back in the main room, the near wall holds a fine latticework pattern of overlapping, multicoloured A5 page frames which, in turn, frame the two doors. One of her new site-specific works, it comprises leftovers from Hirst’s trademark Elemental pairings – a series consisting of pictures sliced carefully from National Geographic magazines to make utterly unlikely but sympathetic bedfellows. Within this new work – as with the Elemental series - are multiple layers of punning and visual resonances. The title: The World And All That Is In It (2017) is taken from a comment made by Alexander Graham Bell, in 1898, when he was elected president of the National Geographic Society. He rejected the idea that the magazine should address only the scientific elite in its tone and content. Instead, he wanted “the world and all that is in it”, as his theme. The composition of small, oblong frames surrounding the larger oblong door frames has a pleasing fractal patterning to it. But the empty picture frames have also contained the world, via their parent publication, and are pinned in place by the kind of specimen pin normally used to impale butterflies by that very scientific elite that Bell wanted to transcend.

Taking advantage of a bizarre element of the building’s original (lawyer’s chambers) architecture – this room features a door that backs on to another door - Hirst has added a further element to the work by tucking into that curious cupboard space a black, almost transparent, mesh dress, into which she has pinned black letters that spell out the work’s title. There are multiple enchantments here: in the fact that the letters would be visible only if worn; the allure of the dress’s transparency (which would render the wearer almost naked); the fact that the wearer herself wouldn’t see these words as they are attached to the back panel; and that the pins would then impale the wearer – from behind - through the heart. We are like those live specimens, being prepared for examination - our own reactions and reverberations revealed to us with startling clarity by Hirtst’s razor-sharp insight. As critic David Lillington has said: “Hirst understands metaphors. She can summon and control them. This is a rare gift … she suggests a number of possible metaphors, but fulfils none of them. At the same time she ensures that they are coherent one with another. This sets up a kind of magnetic field of associations in which (the viewer feels) the imagination is held, as if suspended, or floating. And in this way, the work’s subject becomes not just the connections, but the very idea of connection itself.”

Slightly giddy from that strong metaphorical cocktail, it comes as light relief to return to the sensuous delights of the adjacent Trophy, and then find a cheeky Elemental tucked around the back of the chimney breast: just one, Elemental 109 (2015) comprising two triumphant, wetsuited, female triathletes embracing next to an ancient and voluptuous, ceremonious ceramic vessel

Then Sehnsucht (2013) pins us to the slab again. There is no proper English translation, but this German word means “longing” or “yearning”. Hirst has carved out the word in longhand script from a piece of abandoned leatherette, and then pinned it vertically from the top, so that the word dribbles wistfully down the walls.

The most darkly funny of her works, however, is an arrangement of semaphor flags, made from found 1940s linoleum bonded on to A4 linen board (All at Sea, 2017). They spell out the letters: “WTF”. A cry for help, or rescue from the instant-gratification-oriented, clickbait, fake-news-driven agendas of the world today? Says Hirst: “Flags have evolved into a general tool for rudimentary signalling and identification – especially in environments where communication is challenging.” As a comment on the state of the world today – where communication has never been so easy and yet so challenging – she nails it.

• Nicky Hirst has another solo show, Invisible Mending, at AMP in Peckham, from 13 May – 3 June 2017. She is also appearing in The Word, curated by Michael Petry, at Helsinki Contemporary (9 June – 2 July 2017) and in Rana Begum curates the Arts Council Collection at Longside Gallery, Yorkshire Sculpture Park (15 July – 29 October 2017). 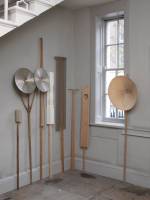 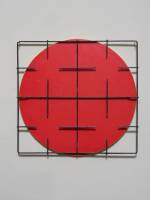 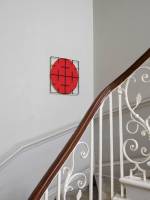 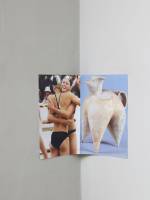 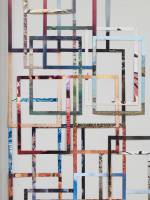 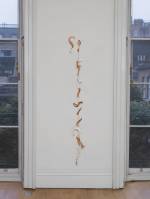 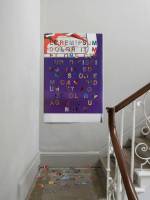