Nancy Fouts: ‘I once made a slingshot out of Jesus and had his head worn like a necklace. Someone stole it. That was a nice compliment’

Nancy Fouts: ‘I once made a slingshot out of Jesus and had his head worn like a necklace. Someone stole it. That was a nice compliment’

Nancy Fouts brings her trademark baroque theatricality, dada mischief and love of a good pun to Flowers Gallery in London with a decade’s worth of visual treats 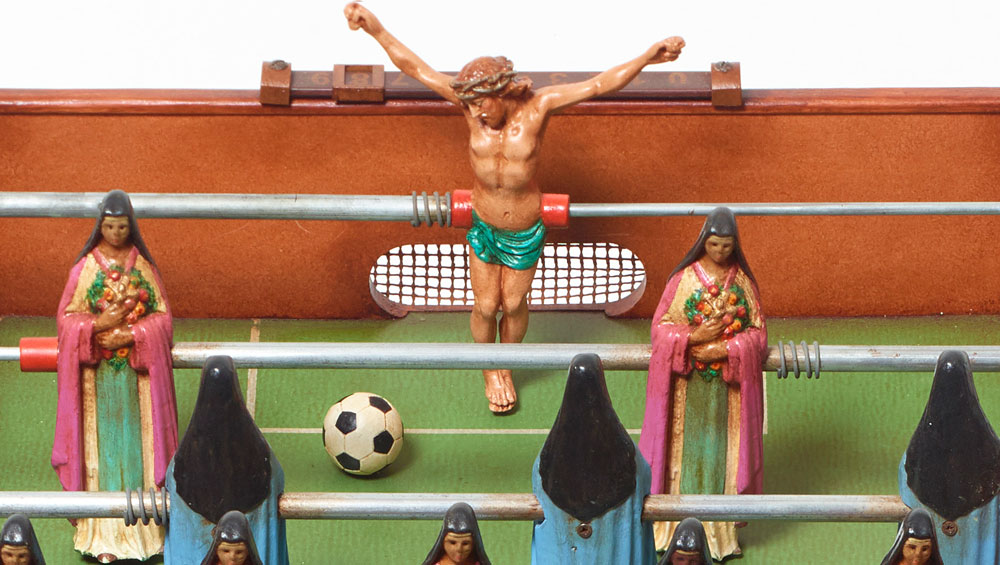 As I stand in front of a rocking chair fitted with leather straps, I am reminded of a myriad of cultural references. The Woman in Black, The Green Mile and Francis Bacon’s screaming Pope Innocent X come to mind. It’s creepy, I say as Nancy Fouts, the artist behind Down the Rabbit Hole at the Flowers Gallery, London, encourages me to sit. “It’s funny,” she insists. “You’ve never seen one of those before. It would look spooky just rocking a little.” To my left, a skeletal forearm and hand has been fitted with a suede Victorian glove and boiled so that the leather has shrunk over the (plastic) bones, giving the appearance of having been removed from a desiccated corpse. Macabre as it is, Fouts (b1945, US) tells me that she never sets out to create dark works. “It’s a second thought, I think. [The hand] is giving the fuck-off sign. To me, that’s just funny.”

Fouts is undeniably playful and lateral in her approach, which served her well in the world of advertising. In 1968, she co-founded a model-making company that counted British Airways, Silk Cut, Benson & Hedges and Virgin among its clients. Her work has also featured on album covers. In 1976, the record sleeve for Steeleye Span’s Commoners Crown, which featured Fouts’ artwork, won an award for the best-designed album sleeve.

As I sit uncomfortably in the electric rocking chair, a football table catches my eye. It is altered so that the players are figurines of the Virgin Mary and, at either end, Jesus, his arms outstretched, guards the goals. There’s a punchline: “Jesus saves,” Nancy tells me, as I consider the meaning of the little painted icons. I ask her, too, about the painting hanging on the wall. It’s a copy of a self-portrait of a young Joshua Reynolds, shading his eyes from the sun. Above the painting, Fouts has fitted a lamp much like one you might find placed above a picture in a hotel lobby. But, as is always the case with Fouts, the two things are connected. Reynolds is now shielding himself from the artificial light.

I spoke to Fouts to try to get to the root of what inspires her and how she feels about how her work is received.

Emily Spicer: Where do your many ideas come from?

Nancy Fouts: I associate two different things. Very often, I’ll have a box of things that I like and I’ll lay them out and they’ll just magically go together. For example, the false teeth fitted the purse. Or I’ll use wordplay, like with the ship made out of joints; it’s called The Trip. That seemed natural. They’re not always wordplays, but they do kind of come together. And I have sketchbooks that I put words or sentences in. I love ideas, it’s all about ideas, not style or technique, but ideas.

ES: But your work is always well executed. Is it important to you that you make a well-crafted object?

NF: Yes, I like that part. It could be an ugly thing, such as the skull with false teeth, for example. The teeth are clean, the skull isn’t too rotten, you know, and it just makes you smile. He looks happy; he just forgot to take the dentures out.

ES: Which artists are you currently following?

NF: One artist that I like a lot is a Spanish artist called Chema Madoz. He generally has beautiful ideas. He uses objects like I do, but he photographs them and the end result is a black-and-white print. And he has a lovely book of his work. And recently I’ve discovered an artist called Pejac and, damn, he’s good. He made a bird’s nest where the twigs are made up of broken arrows. It was very, very nice. It is kind of symbolic: as opposed to being made out of precious little twigs and things, the mother has collected damaged, horrible things to make the nest.

ES: The Virgin Mary is a recurring figure in your work. Is motherhood a theme that interests you?

NF: I don’t use her so much as a mother, but it’s a nice way of thinking about her. I use her as a religious symbol that should be played with. And Jesus is not often played with, although it’s popular now for other artists to play with him. I wasn’t brought up a Catholic, but Catholic symbolism was always amazing to me. I’ve never done anything vicious with him. I wouldn’t feel the need to. But I’ve put him in some precarious situations off the cross.

NF: Yeah, but not in a vicious way. I once made a slingshot out of him and had his head worn like a necklace. Someone stole it. That was a nice compliment. And some people once came and saw one of my shows and said: “Why did you alter Jesus?” I said, who says it’s Jesus, you know, they crucified a lot of people. So there!

ES: Your model of Jesus walking a tightrope was exhibited in a church.

NF: Yes, it was and I loved it in the church.

ES: Presumably the church authorities were happy with the piece?

NF: It was during a group exhibition – and the church is a very serious church, it’s beautiful – but the nice thing is the vicar is a liberated figure. He bought the EXIT sign [an illuminated sign in which Jesus carries the X of EXIT, so that it is transformed into a cross] and it’s still in the church. I take people there to show them because it’s so believably right, and it’s not, as I said, it’s not aggressive or anything and he liked it and he has it to this day.

ES: Ahead of an exhibition in 2011, you sent a hearse travelling through London with “bastard” written in flowers along the side of a coffin. Now, that’s very funny, but there is the chance that it could offend. Does that worry you?

NF: It wouldn’t matter. I was asked to make something outside the gallery environment and I’d had that idea for ever. And it didn’t need to say “bastard”. It could have said “bitch”. Then someone said: “I saw that idea on a television programme,” and I thought, oh no! I thought that nobody had done it, that I was the first, and that was important. It doesn’t matter. I didn’t get any negative feedback. I just saw people thinking, did I just see what I just saw?

ES: Everyone had their camera phones out.

NF: That’s pleasing, isn’t it! You want to shake it up! Imagine if some cool dude came in here and saw something that he had never seen before that moved him either up or down or upset him. I mean it isn’t my job to do that, or my natural way of thinking, but it’s nice that people react. It’s really nice.

ES: You’re quoted as calling Salvador Dalí a prick. You said: “He was playing the crowd to scratch a money-grabbing itch.”

NF: Did I say that? I couldn’t have said a money-grabbing itch! But the gist is there and I was only referring to the fact that – as the story goes – he had a printer that would print his reproductions and before he kicked the bucket, as he got more famous, he would sign blank pieces of paper, so that the printer could keep rolling them out. That’s what I was referring to. If he hadn’t been discovered, he’d probably have been a film-poster painter. He was a bit of a showoff.

ES: And you started in commercial art, as Dalí did.

NF: Oh, goddamn! That’s true. Although some people say I shouldn’t talk about the stuff I did for advertising. But in a way I learned a lot. I was well paid, I had a team, and, boy, oh boy, it was great! But the difference with advertising is that the art director has the concept and sells it to the client, who has a reason for it – to sell more cigarettes, for example. And I’m left with the making of the visual thing. Then they paid the photographers a fortune – big, big, big photographers – to photograph what I made and very often I’m not credited.

I remember a lecture by a guy who was a creative director at Saatchi. He was talking about Silk Cut ads, which were creative and beautiful and I love the ideas – or most of them – and about seven out 10 were mine, but without a credit. If I had been as confident as I am now with my work, I would have said: “That’s interesting, but who actually made the thing that you’re talking about?” Not the photographer, who was paid five times more than the lowly, bottom-of-the-ladder model-maker. But those days are done.

ES: Would you say that your commercial years taught you how to put things together?

NF: Yes, pretty much, and art school a little bit, although I studied graphic design, which has nothing to do with hands-on making. But this is where I should have been years ago. It’s what I really love.

ES: If Dalí was too mercenary, or too concerned with money, what is it that makes an honest piece of work?

NF: I think the first thing is that I am satisfied with it. The next thing that is important to me, honestly, is that people enjoy it. Or they don’t. Or they are a little bit curious. I like to make money. I need to make money, but it isn’t that I value [what something is] worth that much. I value that it is my idea, damn it! That’s what I get a kick out of. I had the idea, here it is, and aren’t I clever? And isn’t it good? And hot dog! And I promise you that there are so many good things coming.