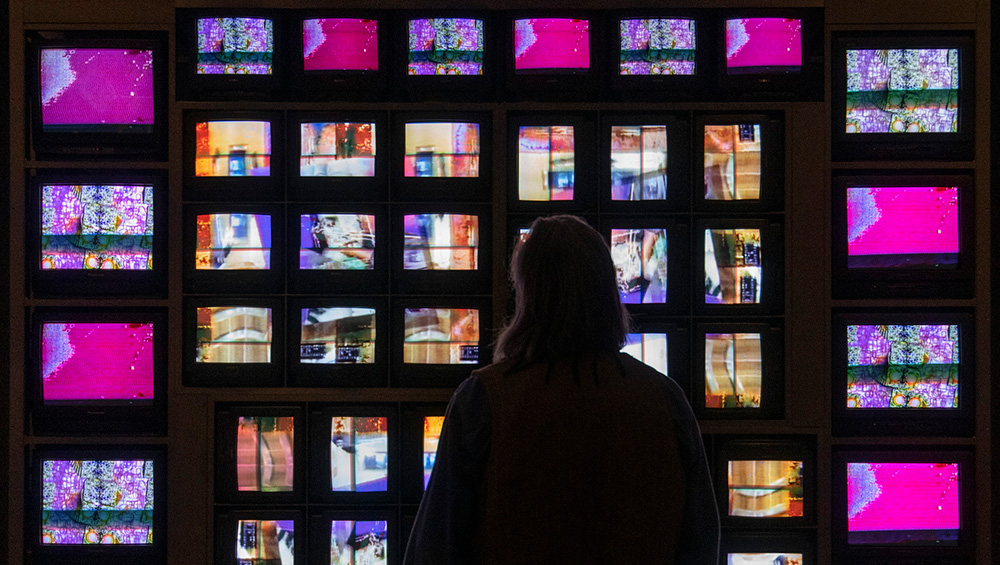 Born in Seoul, Korea (now South Korea), Nam June Paik (1932-2006) lived and worked in Japan, Germany and the United States. It is difficult to know how to describe him. He was an artist, a classically trained musician, an inventor, a technophile and, above all, a visionary. In the early 1960s, his radical experimental art attracted the attention of George Maciunas, the founder member of Fluxus, an international group of experimental artists who frequently used written scores or instructions to create anarchic live performances. In 1964, Maciunas marked Paik out as a traitor to Fluxus for his involvement in an experimental musical drama by the composer Karlheinz Stockhausen. Despite this, Paik continued to take inspiration from Fluxus and bring artists, composers and performer together throughout his career. Communication, and particularly television, was Paik’s starting point. In 1969, he said:

“(I want) to shape the TV screen canvas
as precisely as Leonardo
as freely as Picasso
as colourfully as Renoir
as violently as Pollock
and as lyrically as Jasper Johns.” 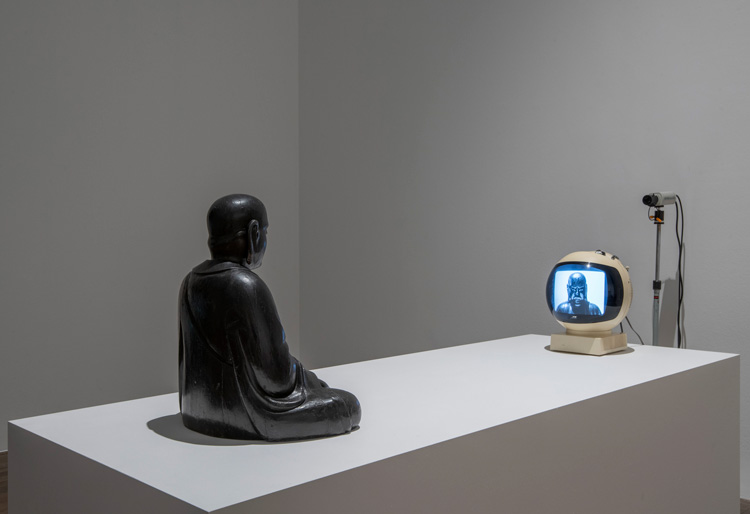 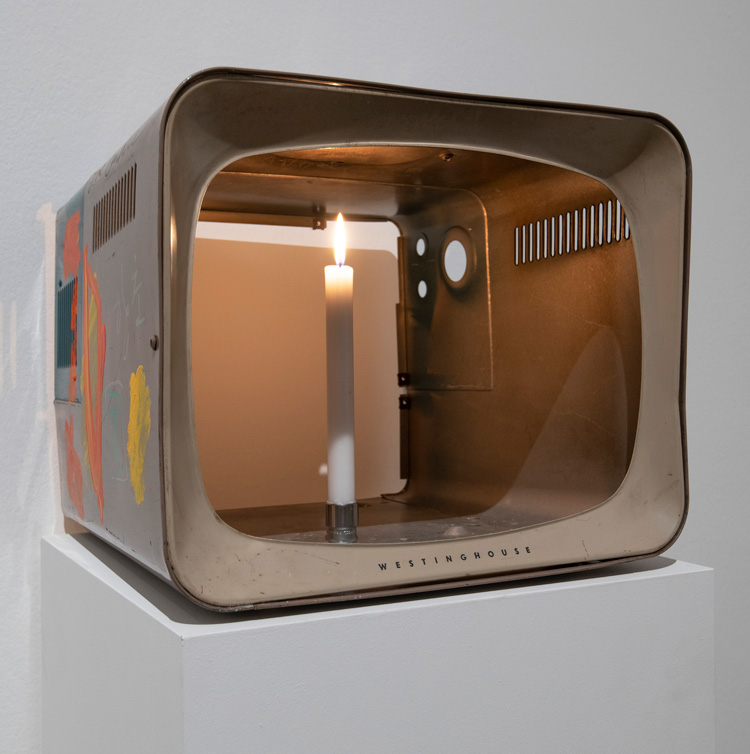 If this exhibition is anything to go by then Paik certainly achieved his wish in a body of work that is equally as precise as it is free, as colourful as it is monochrome, and as violent as it is lyrical. All of these traits come together in works that are often concerned with mobilising the viewer in a curiously engaging fashion. In his experiments in technology and participation, Paik was interested in democratising his medium while, at the same time, making the viewer more aware of the physical aspects of the technology at play. This, and his lifelong exploration of Zen Buddhism, led to works such as Zen for Film (1964), a 20-minute long, blank film to be watched as any other film while becoming increasingly conscious of the projector, the screen, the dust and the scratches on the film and the shadow of ourselves and other viewers. It is a meditation of sorts and this links it to later works such as TV Buddha (1974) and One Candle (Candle TV) (2004). In another related work, One Candle (Candle Projection) (1989), a CCTV camera is focused on a single candle flame. Video projectors repeat the image across the gallery walls and become a source of light and a subject for our reflection. 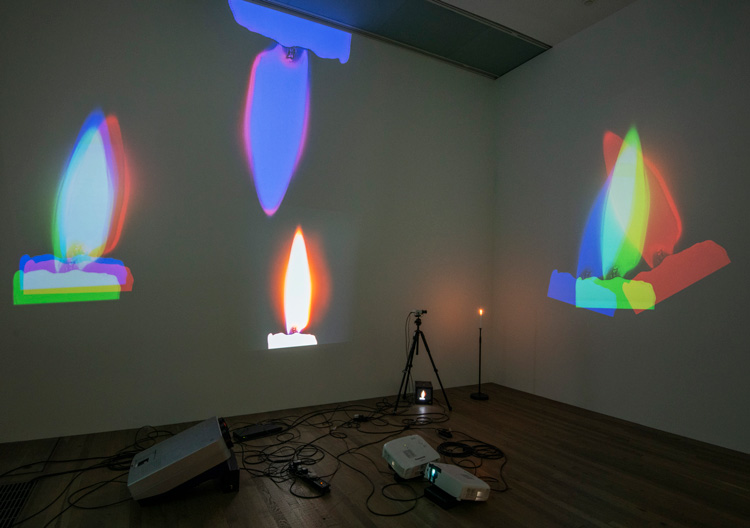 Paik’s TV Garden (1974-77) is a cornucopia of sound and vision. Imagining a landscape where technology is integrated into the natural world, Paik places multiple TV sets among living plants, as viewers look on across a garden room where elements that should be at odds with one another appear somehow coherent and integrated. The room cannot be entered and, in this installation at least, visitors pressed up to its only opening to glimpse the wonders within. 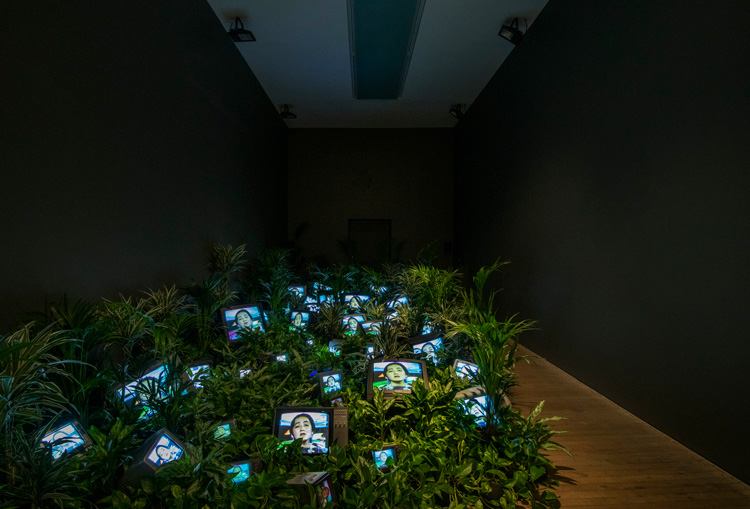 Paik was a frequent collaborator. Whether it was the expertise of technology companies, the instrumental skills of musicians or the shared interests of fellow artists such as John Cage, Merce Cunningham and Joseph Beuys, Paik worked openly with others. One of his best-known collaborations was with the “topless cellist” Charlotte Moorman. Their join interests in avant-garde music, live performance and what they saw as the sexuality of classical music, sustained their collaborative performances for almost 30 years. 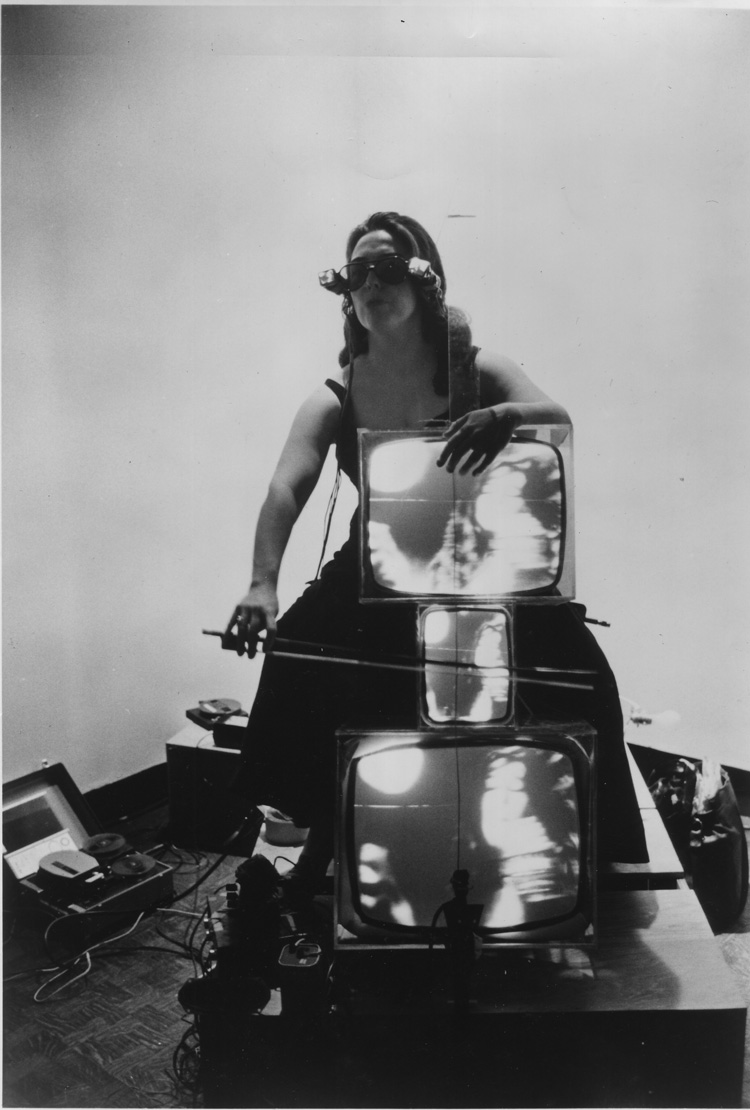 Moorman often performed semi-naked and, in 1967, she was arrested for indecent exposure during a performance in New York. The response from Paik was to construct several television sculptures that Moorman could use as costumes or props during her performances. In works such as TV Bra for Living Sculpture (1969), TV Cello (1971) and TV Eyeglasses (1971), he also aimed to show how humanity and technology could co-exist, or even merge. Following Moorman’s death in 1991, Paik made a number of works dedicated to her, including Room for Charlotte Moorman (1993). Remnants of that room appear in this exhibition as items of clothing that belonged to Moorman hang in the gallery, as if to remind us of her absent presence. 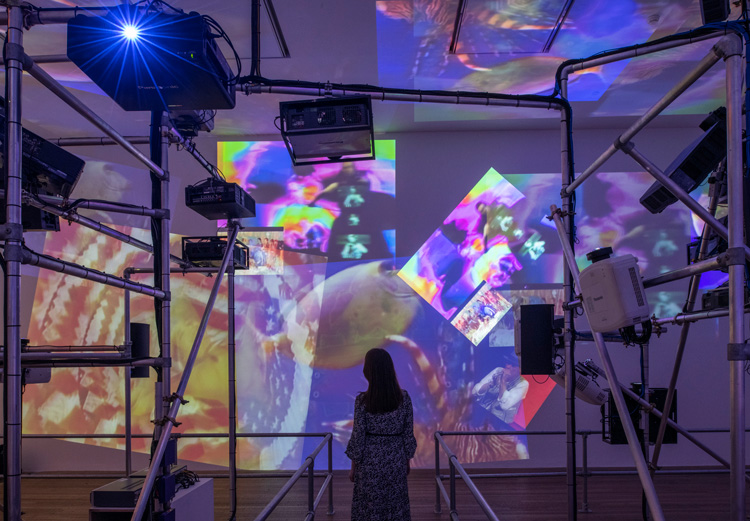 In 1993, in another collaboration of sorts, Paik and the artist Hans Haacke were invited to jointly represent Germany at the Venice Biennale. One of the key works Paik exhibited was Sistine Chapel (1993). This immersive video installation filled one wing of the pavilion on that occasion. It used every available surface including the ceiling, and 42 projectors played simultaneously and randomly switched between four different videos. The audiovisual collage included new footage as well as extracts from past videos by Paik. It involved Paik’s friends, collaborators and public figures of the period and was essentially a summary of his career with video. Sistine Chapel (1993) is presented again in this exhibition for the first time since its creation. It is a mesmerising assault on the senses – a collage of light, colour and sound, fragmented and overlaid in a manner that sucks you in. As exhibitions go, it is surely the finale that Paik deserves. It is bright, brash, intelligent and simply joyous. 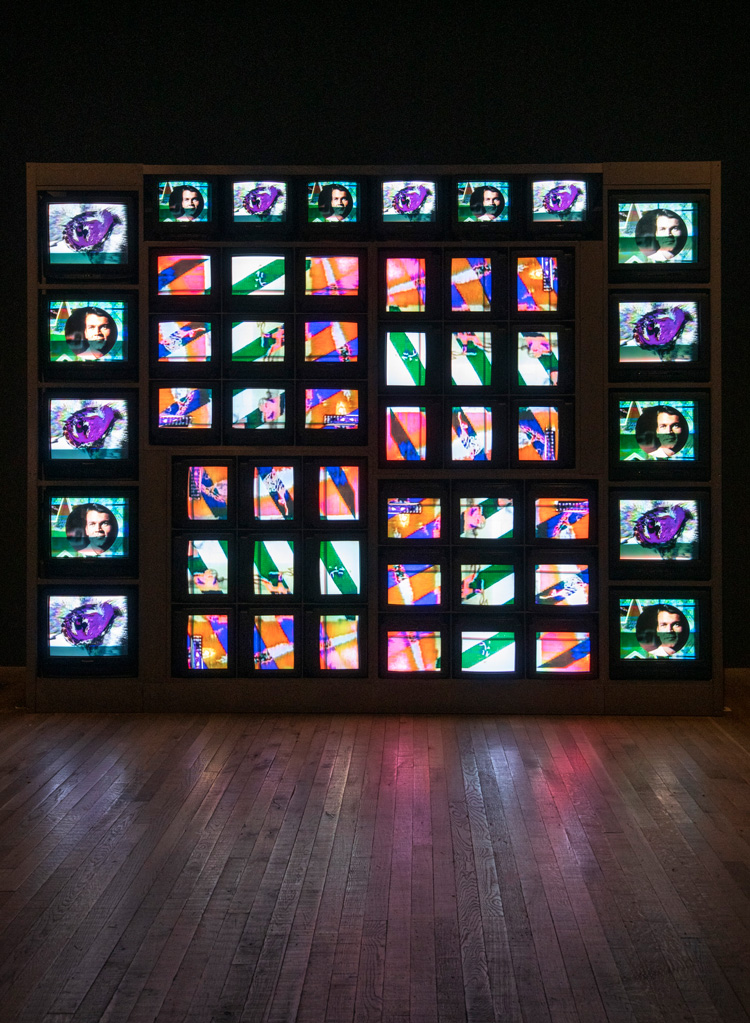 The extent of Paik’s imagination and vision is surely evident enough in his work, but if verbal confirmation were ever needed, he gave that too. Forty-five years ago, in 1974, he predicted: “TV will gain many branches … Picture-Phone, tele-facimile, two-way inter-active TV for shopping, library research, opinion polling, health consultation, inter-office data transmission, and … 1001 new applications … a new nuclear energy in information and society-building, which I would call tentatively ‘BROADBAND COMMUNICATION NETWORK’.”

In today’s world of the world wide web and the internet of things, Paik’s predictions of 1974 could not have been more prescient. In this exhibition, Paik’s robots, machines, instruments and other artworks appear not as relics of a bygone age but as shadows of the present day, eerie predicators of our contemporary condition. 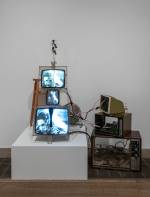 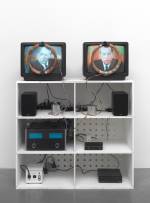 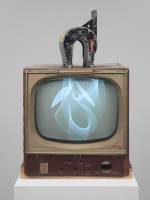