Mixing It Up: Painting Today

Mixing It Up: Painting Today

In an uplifting show that is dizzying in its scope and variety, 31 contemporary artists celebrate diverse images and ideas 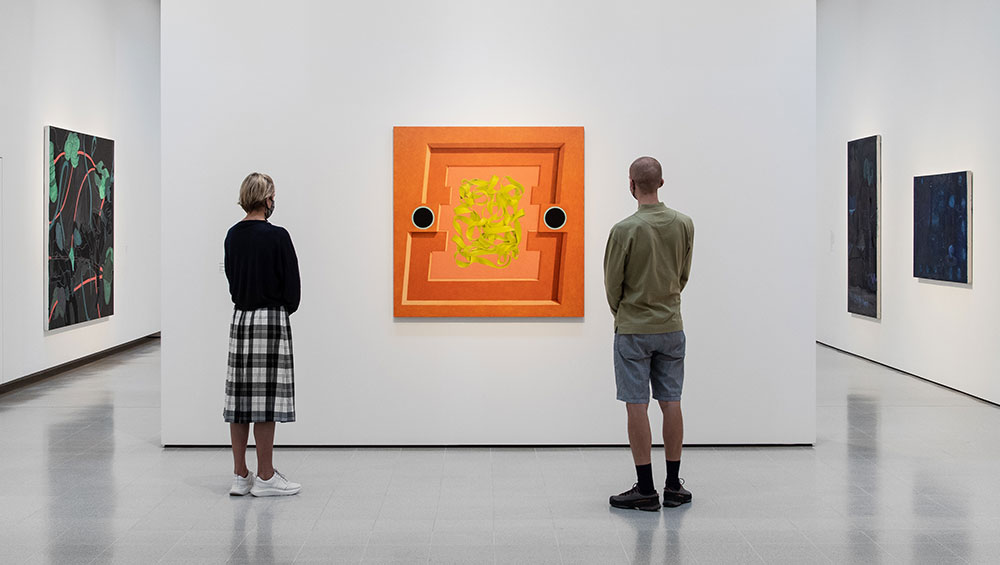 At the Hayward Gallery at the Southbank Centre, overlooking the inky Thames and the shimmering lights of a just-woken-up-again London, Mixing It Up brings together 31 contemporary painters in a vast, brilliant and uplifting show. Featuring renowned artists such as Peter Doig and Lisa Brice alongside emerging and re-emerging artists such as Caroline Coon, this exhibition captures a brave and sensual mood that feels exciting and unstoppable in its energy and reach.

In Smoke and Mirrors (2020) by Brice, for instance, a group of nude female figures seem to saunter and languish in their various poses, as they reclaim a moody, mesmerising space. Framed by easels, canvases, mirrors and reflections of easels and canvases, and using a limited palette of browns, blues and a little white and green, the atmosphere is melancholic and entrancing. The spotlights dot around the figures like little moons, casting a luminous sheen on the naked bodies as they stand or sit and smoke, looking like shop window mannequins or cabaret singers backstage in their dressing room. There is a sense of revealing and yet resisting the performance of the artist or model; here, a sense of unease and stagnation imbues the creative space, even as it celebrates it.

In Brice’s Charley (2020), meanwhile, a female painter casts two strong shadows on the walls behind and in front of her as she stands on a stool to paint a (self?) portrait on a canvas almost as tall as she is. Her shadows seem to root her to the spot, framing but possibly also trapping her; the portrait-within-the-painting seems more “real” and colourful than the working artist; the representation outshines the artist behind it. As Brice reclaims or corrects aspects of the male-dominated art world, she also expresses a sense of unease and confusion: what is it, after all, to be a female artist? What is next after reclaiming the easel, taking one’s seat?

Coon, the legendary radical feminist artist, whose work is experiencing a “re-emergence” after decades of relative obscurity, has some answers. In Rugged Defensive Play (2020), she blurs and teases the boundaries between masculinity and femininity, using the football pitch as a microcosm of wider society, where the players wear clownish makeup and the supporters seem to be rows of masks. Her aim is not only to reclaim female sexuality from patriarchal structures, but also to liberate masculinity from limiting and stale conventions.

She told me before the opening: “Gazing at sport and masculinity, for me, is a critique of feminist theory from the 70s, which completely ignored the lesbian female gaze and the heterosexual female gaze. In the 70s, at that very crucial moment for feminism, a lot of women artists were painting and reclaiming women from the male gaze. To me, painting nude women could also perpetuate a trope of female flesh in the public domain. What I wanted to put forward – in my heterosexual mode – was my love of the male body. My female gaze at men was reclaiming female sexuality at a time when some feminists thought all sexuality put women in such danger that it best be smothered. But I love the male physical form, and I protest the way male nudity is so often hidden from us for this reason: if men are attracted to male nudity, they risk the ‘stain’ of homosexuality.”

By revealing the homoeroticism implicit in “the beautiful game”, which is at once obvious and concealed, Coon shows the truly performative nature of masculinity (as well as femininity). This use of the “female gaze” and, with it, the deconstruction and questioning of wider assumptions about sexuality and gender, requires, of course, a “mixing up”, and it is precisely through this use of painting as a form of assemblage and even anarchy that the “punk spirit” that Coon is renowned for takes a fresh role in current social affairs and contemporary art.

Next to Coon’s painting sits two new works by Jonathan Wateridge – a lone woman by a pool, dipping her foot into the water as she seems to look directly at the viewer, in Figure by Pool (2021), and a lone man in swimming trunks by the same blue pool, in Night Swimmer (2021). Both figures seem to be lonely and searching, melancholic in the dusk or night, with the water around them dark and eerie. Are they a couple? Are they nevertheless apart? There is such a resonant loneliness to these paintings, seeming to express an eclipsing existential crisis that is unclear and unspoken, but no less consuming for that. Positioned next to Coon’s works, which are so playful and uplifting in their tearing up of patriarchal structures, Wateridge’s paintings underscore the real melancholy that remains beneath the surface of relationships in which, perhaps, such societal pressures and arbitrary roles leave one detached and searching.

Nearby, Doig’s recent works, including Untitled (Small Wheelchair), Music (2 Trees) and Shadow (all from 2019), feature scenes in Trinidad, evoking the mythologies of the island and their role in galvanising resistance to slavery and wider oppression. In Shadow, especially, Doig captures a spiritual, musical resistance (referencing the idea of “Obeah”, which “refers to the use of ancient knowledge and the engaging of the forces of nature to seek freedom … the obeah forces a confrontation of pain, poverty and the fear of blackness. Shadow is the obeah that helped us to survive.”1 This powerful figure and force, depicted in dark grey and blacks, with a skeletal but clothed form, carries a golden violin on its shoulder, staring out to a lighthouse. It is at once an image of trepidation and hope, haunting and power. Alongside the melancholic paintings of Wateridge and the vivacious works of Coon, Doig’s paintings heighten a sense of swirling, changing, narratives and ideas, spiritualities and forces – storm-like in their power and awe.

It is precisely this sort of intense juxtaposition – seeing such varied paintings side-by-side and on such a magnificence scale – that stirs up such fascinating and powerful feelings and ideas. Indeed, this “mixing up” can be fascinating and shocking in equal measure. At times, walking through so many rooms of excellent, absorbing and often mesmerising paintings, the exhibition can feel overwhelming; at various points, as I circle the rooms many times, I make mental notes that I will have to return, as it seems impossible to take in everything. There are so many styles, artists, stories and sheer visual intensity, and the show is dizzying in its scope and variety.

Indeed, a sense of confusion, disorientation and chaos is key to the exhibition’s power and resonance. As Ralph Rugoff, director at the Hayward Gallery, has said: “If painting is typically pigeonholed as the most conservative and traditional of art forms, the artists in Mixing It Up offer evidence for a contrary point of view: that painting – thanks to some of its unique characteristics – may in fact be the medium that accommodates the most conceptually adventurous thinking.”

In these precarious times, where communal panic, anxiety and confusion are all-consuming, the painters in this exhibition embrace crises and ambiguities, in the chaos, feelings and mental states that such experiences imply. These subjects are, of course, relatable and even disturbingly so; they expose gaslighting, societal deceptions and mind games on a massive scale. However, all together, all mixed up, these responses to real crisis are awe-inspiring, and there is real a sense of the sublime in the assemblage of these works, which are all, themselves, also assemblages. In this sprawling space, chaos is explored and processed, it is colourful and emotive and real. Suddenly, as in Brice’s paintings, the smoke and mirrors and shadows become starkly obvious, it becomes clear that this precarity, this being mixed up, is a very communal experience. That alone is so powerful, and of the moment.

Attillah Springer, quoted in the exhibition catalogue for Mixing It Up.