“Before we go any further, can I just make sure that you actually know who I am and that you know what I do?” This was the question with which Michael Landy (born 1963) announced himself upon arrival at the National Gallery having been invited for consideration for the Rootstein Hopkins Foundation Associate Artist scheme.

A Goldsmiths graduate (1985–88), a YBA, and a participating artist in the notorious Freeze exhibition (1988), Landy is probably best known for his 2001 installation, Break Down, for which he took over an empty department store building on Oxford Street and systematically catalogued and destroyed everything he ever owned. One might, therefore, understand his uncertainty. Nevertheless, he was appointed as the gallery’s eighth Associate Artist and accordingly given a studio for two years.

Just before accepting this residency, Landy had co-curated an exhibition of his and Swiss kinetic sculptor Jean Tinguely’s work at Tate Liverpool. Tinguely (1925–1991) has been a huge influence on Landy since his having seen his Tate retrospective in 1982, which included sculptures you could ride, and others that could be activated by pressing a foot pedal, all made out of junk. It was the first time Landy saw people laughing and smiling in a gallery, and this was his aim when he began to conceive Saints Alive. “This is a very public place,” he says of the National Gallery. “I wanted to involve the public somehow in a way other than looking at painting.”

And thus we find ourselves today surrounded by seven towering sculptures, fragments of saints, composed to represent specific individuals, such as St Apollonia, who had her teeth pulled out by a pair of pliers, and St Jerome, whom legend says used to beat himself with a rock to rid himself of impure sexual thoughts, as well as a curiously fascinating multi-saint, combining the attributes of five of Landy’s favourites. “The saints are all very single-minded individuals,” he says. “That’s what I like about them.” Each larger-than-life work can be activated by a foot pedal, and then the acts of self-flagellation and violence begin. Fibreglass body parts, metal cogs, wheels, fan belts, electric heating elements and motors – all accumulated from junkyards, car boot sales, and flea markets – these sculptures, as they clatter and crash loudly, represent Landy’s obsession with rubbish writ large.

And his appropriation and bricolaging of fragments is not actually anathema to the gallery’s collection either. For, indeed, it is itself a collection of fragments; broken bits of art works being displayed as if they were whole. As Landy describes: “I recreate the saints like Frankenstein’s monster. I take an arm from one painting, a chest from somewhere else – all in different proportions. And then with the help of Tinguely, with the wheels and the motors, I make them into a kind of kinetic Renaissance sculpture.”1

Furthermore, in typical Landy style, he declares: “I like the idea that by the end of it, it’ll be a junk heap, and they’ll all have fallen apart.” Again, this is not so far removed from the reality of the gallery’s seemingly sedate paintings. As Colin Wiggins points out: “This is a violent collection. High art tends to sanitise the way we see things, but putting this here will give the saints back their sufferings.” 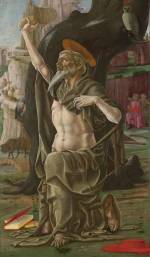 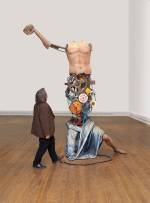 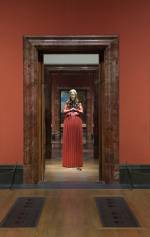