Sarah Lucas came to prominence in the 90s with the generation of Young British Artists, but it has taken her until now, at the age of 52, to be invited to represent Britain at the Venice Biennale. Curator Richard Riley talks to Studio International about why, with a new shift in her work, this is just the right moment

This year’s British Pavilion at the Venice Biennale cannot be missed, sending its bright yellow, sunny rays beaming across the Giardini. As curator Richard Riley notes, you really can’t help but smile when you see it. Inside, new works by Sarah Lucas (b1962), built in response to the scale of the pavilion – some domestic, with domestic objects integrated into the sculptures; others larger than ever before – contain all the well-known Lucas tropes: phalluses, the nud, pages from tabloid newspapers, the toilet and cigarette butts – which, she explains, “are for titillation mostly. That is, gentle stimulation of a sexual kind.” 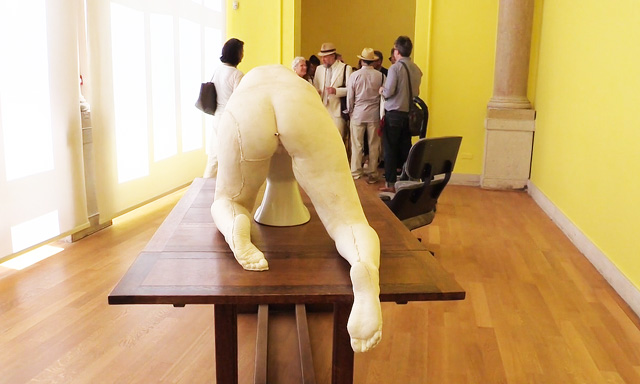 Describing the pavilion as “a bit like a dessert” with the yellow like custard and the white of the plaster casts like meringue, Lucas offers up lashings of bawdiness and dry wit. Is this too British for an international audience? Riley, who considers Lucas to be at the forefront of British art, thinks not.