Since the early 1990s, the brothers Chapman have used their art to unearth our deepest fears and prejudices, to restage and poke fun at our traumas, and to take a magnet to our moral compasses. Their works in sculpture, painting, installation and video have featured severed body parts hanging from trees, children with penises for noses and original artworks by Adolf Hitler adorned with rainbows. The Chapmans have devoted two decades of art-making to constructing a new kind of hell, one all the more terrifying for its closeness to a visual reality that we ourselves consume and produce.

Come and See reflects on these two decades of preoccupation with the dark and the disturbed without describing itself as a retrospective. Yet the exhibition occasionally carries the characteristics of the latter by including work made as early as 2001 and pieces for which the pair are very well known, for instance their Disasters of War series of etchings. There is even an installation named Shitrospective (2009) consisting of cardboard and wooden versions of some of the Chapmans’ more famous works displayed on plinths – a parody, no doubt, of the very idea that their work can be canonised. The show can more appropriately be termed a mid-career retrospective: a look back as a means of looking forward, consolidating the brothers’ position as two of the Young British Artists era’s most important members as that ship continues to sail towards the horizon.

One of the perpetual themes of the Chapmans’ work has been the notion of collection, display and museological narrative, and here this takes centre stage. Works from the Chapman Family Collection (2002) are dispersed through the gallery, their tribal aesthetic combined with the iconic language of McDonald’s. Throughout the show, artworks are crammed into the space to an almost claustrophobic degree. Works on paper are shown Salon-style from floor to ceiling, requiring viewers to crouch and stretch to engage with certain pieces. Perhaps this space is too small to house a representative amount of work for a mid-career retrospective, but there is also a sense that this is deliberate – that the artists are immersing us fully in their personal nightmare while telling us that it’s our own (“Your mind is a nightmare” is the message scrawled above one part of the installation).

Each of these parts contributes to an exhibition-wide discourse on spectatorship that takes its most disturbing form in the life-sized models wearing Ku Klux Klan glory suits with smiley faces stitched on to them. Their feet are clad in multicoloured stripy socks and Birkenstock sandals. They direct viewers around the space, bending over objects in the act of contemplation. We join them as audience members in the film installation Kino Klub (2013), and here our fear of their dark silhouettes soon turns to companionship as we sit side-by-side with them on wooden chairs. These figures produce the shock value that we expect of the Chapmans, and we are told that they also carry a dark humour which, it is implied, make the use of the iconic KKK suits acceptable in the contemporary art context. But while the figures are sinister, they are not humorous; the smiley faces are an obvious ploy to juxtapose the frightening with the funny, but there is a failure of connection between the two ideas.

It is a similar effect to that produced by the Chapmans’ vitrines The Sum of All Evil (2012-13) and Rivers of Blood (2007), dioramas featuring thousands of tiny handmade figures engaging in the most gruesome and inhumane acts that man has been known to commit. Presumably the sheer repetition, the multiplication of death, is intended to carry this darkly comic element, too. While technically and visually these theatres of criminality are fascinating to explore, and point to a human penchant for “rubbernecking” (a phenomenon that is explicitly referred to in the title of one of the exhibition’s sculptures), they never enter the realms of the humorous, other than eliciting the faint and guilty giggle of a viewer unable to respond “appropriately” to such accumulated monstrosity.

Among all this excess, however, there is an enduring sense of restraint in the Chapmans’ work. They are evidently expert craftsmen, able to articulate their ideas in any artistic medium, which accounts for the variation in their oeuvre and consequently in the conceptual make-up of their work. Happily, this exhibition includes examples of this restraint in some of the 2D work, and these lend integrity to the show’s more outlandish contingent – the sculptures, installations and films. In a series of paintings mimicking the formal private portraiture of the 18th and 19th centuries, decaying faces are depicted in place of healthy or idealised ones. One Day You Will No Longer Be Loved is a subseries that suggests the Dorian Gray-style disintegration of a painted portrait in an enclosed room, and highlights portraiture’s purpose to offer the reverse: an ever-youthful painting of a face that is, in reality, decaying.

At the end of the show, the mood turns philosophical with the series of 21 beautifully executed pencil studies What Really Happens To Us After We’re Dead? (2012). The artists answer this question with surprising confidence: we become delicate wisps on the surface of the Earth, easily erased. Taken as a whole, this exhibition is an existentialist statement, and a fairly unpleasant and revealing one. According to the artists, we live, and while we live, we are dark and selfish creatures, and we can be dark and selfish because when we die, we cease to be even so much as a memory.

With the big questions answered (thank you, Jake and Dinos), we are left to contemplate whether this view of life is satisfactory. What happened to morality? To charity? To learning from history’s mistakes? There is little room for anything other than death and destruction in the Chapman brothers’ extremely black-and-white take on human behaviour. On occasion, they make more nuanced observations ­– their KKK figures, for instance, cease to alarm by the end of the show, pointing to the short-term nature of shock and our ability to normalise almost anything, even cold-blooded murder, though overexposure. Yet their insistence on flashes and bangs – on the constant promise of something more exciting around the next corner – carries the suggestion of the one-trick pony. The pony no doubt goes about its trick in a self-parodic manner, pointing to our ceaseless appetite for sensation, but in the process it runs the risk of insulting its audience’s intelligence. 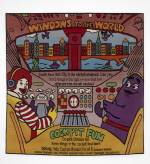