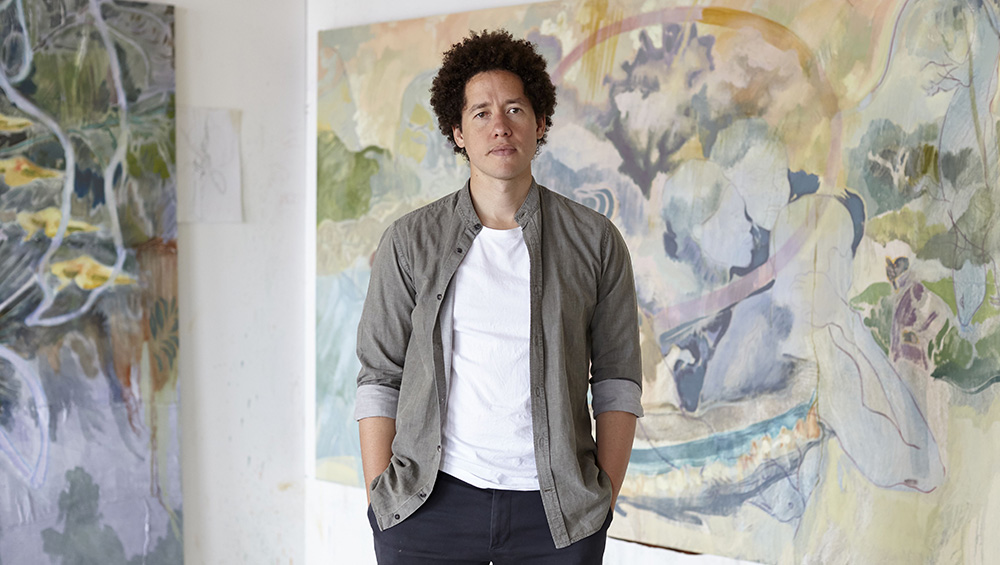 Of the several supposed paradises that appear in Paradise Edict, the first might be the purest. Five paintings hang above a stairwell, elevated so that one has to crane upwards to see them. Each depicts animals amid thriving vegetation. They are not quite in the state of nature. The corruptions of human society are present even here. One, Sykes Monkey, sits smiling atop an ostrich, asserting dominance over his avian cousin. Another primate walks around in a leopard-print bra, while a third reclines nude, modesty concealed with a suggestive bunch of bananas.  If there was once an age of innocence, it has now lapsed. 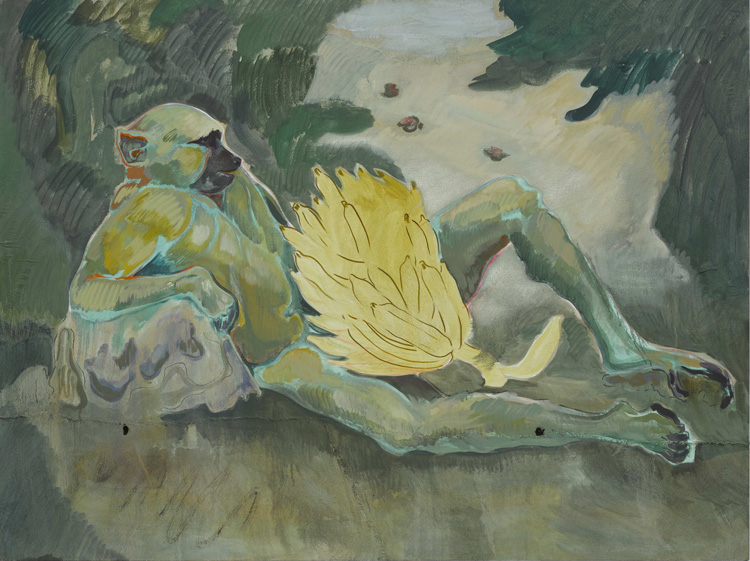 At once seductive and sinister, the world of British Kenyan painter Michael Armitage (b1984, Nairobi) is a fallen one, shot through with violence and pain. It is a place where myth and folklore have bled into contemporary East Africa. A woman gives birth to a baby donkey, while marvelling at a washing machine in the sky. A shower of blood falls over a latter-day Midas, lapped by a cheetah. A chicken thief, face defiant (Armitage is particularly good at faces) is pursued by a flaming ape-bird hybrid. This vacillation between realism and symbolism marks Armitage as an artistic descendant of Paul Gauguin, as do his coruscating colours, seductive even in his slighter works. But unlike that priapic post-impressionist, Armitage acknowledges from the start that the exotic is a troubling construction, projected from Europe as it sought to subjugate the world. 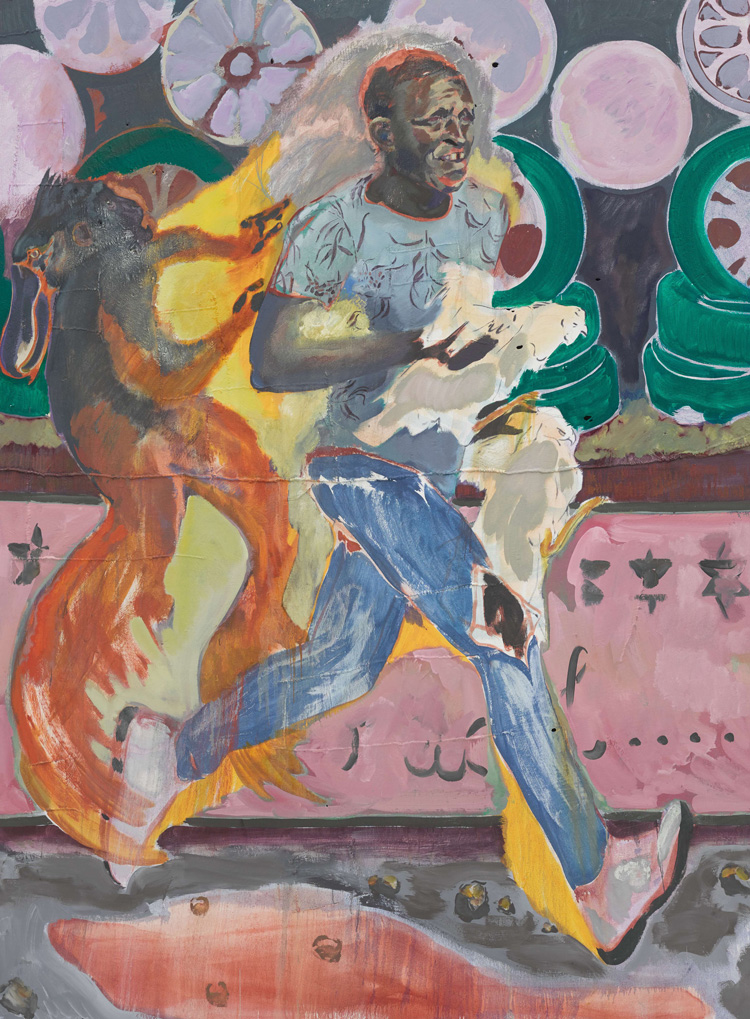 Paradise Edict is the largest exhibition of Armitage’s works to date. It comes just half a decade after his first solo show at the White Cube. His ascent has been rapid.  in 2017, drew universal praise. It also prompted a hundred comparisons with the Scottish-born Peter Doig, among the most renowned figurative painters at work today. And, like Doig before him, Armitage’s paintings quickly became hot property on the commercial art market. Last year, one sold at Sotheby’s for more than 20 times its asking price, after appearing in the Venice Biennale. Several of the works in Munich come loaned from the first tier of super-collectors.

It is easy to see why Armitage’s art holds so much appeal to these buyers. His is a new voice with a distinct perspective and he works in a well-trodden idiom. But his art amounts to more than a postscript on its predecessors. Armitage’s works have an aqueous brilliance of their own. This stems in part from his tools. Armitage applies gossamer light layers of oil paint, colours loaned from a dream, on to a canvas of lubugo. This substance, bark sustainably stripped from Ugandan fig trees, provides a rugged counterpoint to the paint’s incorporeality. Irregularly shaped pieces are stitched together, adding a textual dimension to each artwork. 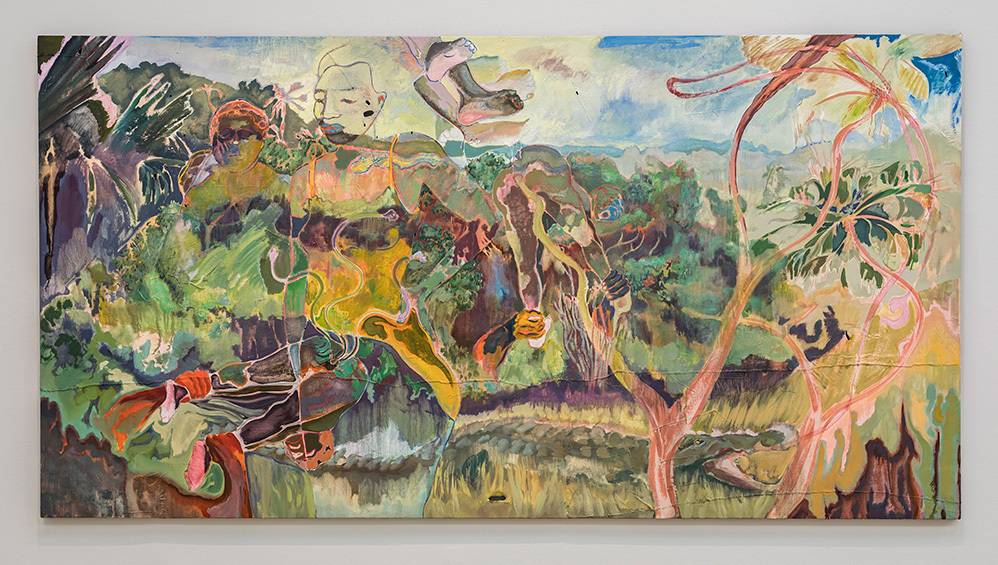 To this, Armitage adds a second dichotomy, the melding of mythological scenes with those drawn from observed experience. Sometimes several events occupy the same physical space of the picture field, dissolving mirage-like into others. Paradise Edict (2019), the exhibition’s title exhibit, crams several narratives into one lush landscape. There is a contemporary Adam and Eve, the latter striding forward with a cowed, circumspect expression. Behind her, serpentine forms curl and snarl. Above, feet begin their descent from the sky, perhaps cast down from heaven. And then, occupying the same whirls of paint, there is a gory scene reminiscent of Francisco Goya’s Saturn Devouring His Son (c1819-1823), a screaming man grabbed by two firm hands. 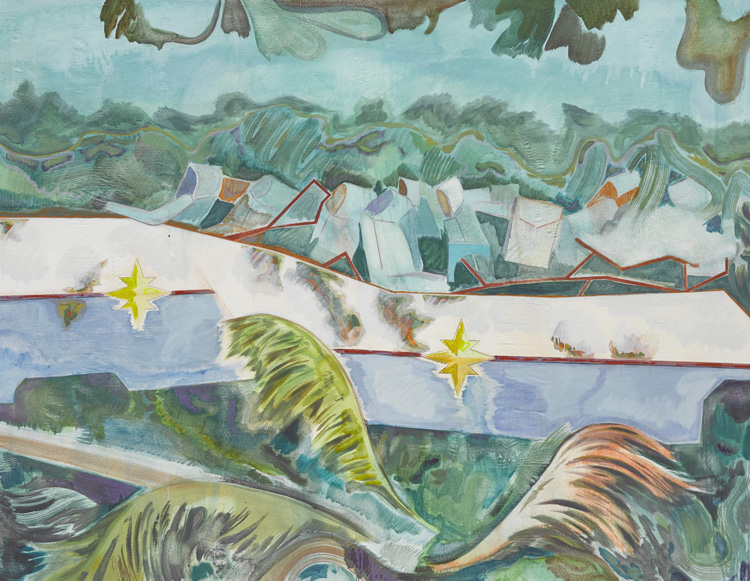 There are at least two different paradises here: the biblical Eden and the colonial-era fantasy of an uncorrupted idyll, as epitomised by Gauguin. Does the edict stem from God, from Saturn, or from Armitage’s artistic predecessors in the representation of “exotic” scenes? The weight of art history exerts a heavy pressure on Armitage’s work, and not just because of its fauvist radiance. The majestic Exorcism (2017), which depicts a Tanzanian ceremony of exorcism, interpolates figurative groups from Edgar Degas’ Young Spartans Exercising (c1860) and Édouard Manet’s Music in the Tuileries (1862) while appearing derivative of neither. Armitage is restoring East African life to the prestige of these “western” forms. But he is also working to reach these masters of the past, absorbing influences in refining his work.

Armitage’s influences are not only western. Earlier this year, he established the Nairobi Contemporary Art Institute, dedicated to the preservation and dissemination of East African art. Paradise Edict’s capacious final chamber showcases six of the region’s artists, in what amounts to a tantalising preview of the institute’s mission. Though varied in style – from Meek Gichugu’s outrageous obscenities to Elimo Njau’s sun-washed landscapes, dotted with hidden eyes – elements of Armitage’s style can be seen in all of them. The late Ugandan Jak Katarikawe, once dubbed the Marc Chagall of Africa, depicts animals with the same humanity, while the Kenyan Asaph Ng’ethe Macua, a specialist in gouache, pre-empts Armitage’s magical realism. All six artists deserve more extensive attention. 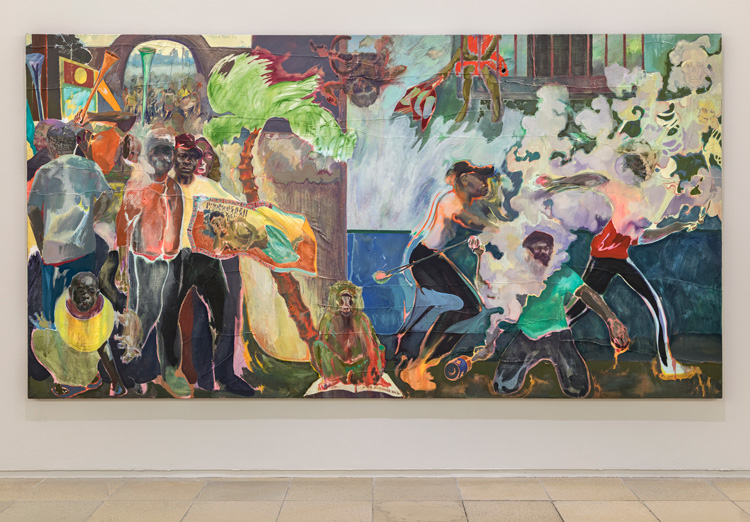 Placing these artists at the end prevents them from being relegated to a sideshow, footnotes in the Armitage story. But Paradise Edict climaxes two rooms before them, with a recent series that sees Armitage weave his interest in portrait, figurative groups, landscapes and animals into cohesive wholes. The Kenyan Election cycle (2018-19) comprises eight paintings made in response to the civil unrest after that country’s contested 2017 presidential election. In Armitage’s hands, protest is imbued with an ecstatic energy, one that sometimes erupts into violence. The Promised Land (2019) shows a peaceful protest degenerate with the firing of a Molotov cocktail; a baboon sits in the centre, seemingly impassive in the face of the fracas around it. There is still surrealism: in Accomplice (2019), a trio of figures floats above a tyre fire, while Pathos and the Twilight of the Idle (2019) turns a sling-carrying woman into a symbolist allegory. But Armitage’s clearest vision of Kenya as it is today, vibrancy and liveliness coexisting with poverty and political chaos, is his most satisfying to date — and might presage great things. 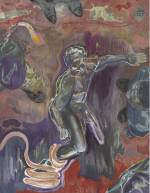 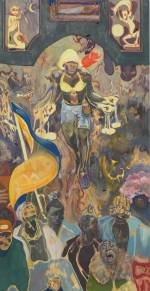