Material is the Message

Material is the Message

The exhibition of “paper sculpture” taking place in the Marble Palace of the Russian Museum features more than 100 works by 60 artists and designers, mostly from Moscow and St Petersburg. Covering the period from the 1980s until the present day, most works were made within the past decade, sometimes specifically for the exhibition.

Even though it is nominally dedicated to sculpture, it is really a multimedia display of works made from, and about, paper: some are in 2D, looking like paintings and collages; some are architectural models; and some feature furniture and clothing designs; there is even one video. The exhibition is a sequel to a 2001 show at the Russian Museum’s Stroganov’s Palace branch, which was very popular, according to the curator, Elena Vasilevskaia, but left only a leaflet and no catalogue.

It is rare nowadays to have an art museum – as opposed to a museum of art and design, for example – mount an exhibition dedicated to a specific material. For better or worse, the arts and crafts movement did not leave a significant trace in much mainstream art, having been replaced by media of all kinds. To understand the logic of the exhibition, we should be mindful of the history of Russian art. Its focus on specific material brings to mind many facets of Russian modernism, beginning with Symbolism at the end of the 19th century and ending with the revolutionary avant garde in the early 20th century. Among artists representing this historic movement, Vladimir Tatlin, in particular, investigated qualities of specific materials, developing what he called their “culture” (his description can be translated as “culture of materials”, not to be confused with material culture or pop art). By devoting an exhibition to works made from paper, the Russian Museum promotes this heritage.

Only a few works in the installation, however, allude to Tatlin directly or tangentially. Vladimir Volkov’s Oval (1983) or Andrei Krasulin’s Relief (2007) recall creations not only in the shapes or titles of their works, but also in the juxtaposition of various material textures or their fakturas, a specifically Russian term denoting a variety of ways the visual makeup of different materials affects our senses. It is interesting that both Volkov and Krasulin, who reference Tatlin’s work most straightforwardly, belong to the same generation born between the first and second world wars, with Volkov being a respected member of the unofficial artistic scene in Leningrad and Krasulin having built a career as an official Soviet artist and member of the Union of Painters, who lives and works in Moscow. Despite being accepted by the Soviet officialdom, Krasulin is an exceptionally talented artist. His Box (2010) and Spiral (2012) are exemplary of this artist’s impressive ability to find a suitable form for a material or an object. A Floating Form in Space (2012) by a younger Nikolai Kiselev is another successful attempt to explore tensile and flexing properties of a sheet of cardboard arranged in such a way that it looks as if it may break at any moment. A few artists in the exhibition, such as Vladimir Orlov and Latif Kazbekov, for example, took Tatlin’s principle of knowledge of properties of materials to another level by manufacturing their own paper.

As far as the symbolic dimension of Tatlin’s work is concerned, Vladimir Govorkov’s Mechanism of Big Politics (2014), for example, recalls unambiguously Tatlin’s famous Monument to the Third International with its tower-like form, rotating elements, and a political title. In its breakup of the prototype’s unified dynamic structure into multiple cylinders of various sizes, it is a pessimistic commentary rather than a hopeful declaration, an attempt to come to terms with the passage of time and a crushing defeat of revolutionary dreams. Other notable towers in the exhibition are Aleksandr Kozhin’s Babylon Tower (2008), composed of rounded forms of gradually diminishing size mounted on top of one another, and Aleksandr Maslov’s Tower (Ab Ovo) of 2012, in which the artist piled multiple egg containers on top of each other, making a successful pun about avant garde’s utopian aspirations.

On the tragic end of the artistic commentary about the passing age of utopia, the theme of symbolic collapse, fragmentation and decomposition is central to Iurii Nikiforov’s installation A Fallen Mountain (2012), featuring several irregular pyramidal forms arranged on a sizable platform and placed prominently within the exposition. The undying attachment to utopia persists, however, in a stunningly complicated, but nonetheless visually attractive, attempt by Victor Votsky (Gavrilov) to map out language in space in his Interpretation of Text in Space of a Non-Linear Structure (Fracturing of Space) of 2005-12, which pushes the limits of our understanding of language as governed by the rules of time rather than space.

Although the leading avant-garde figure in the exhibition is Tatlin, there is a curious work by Andrei Liublinskii and Mariia Zaborovskaia that references another avant-garde giant, Kazimir Malevich. In their Collective Action-1, the artists construct a prototypical architecton with tiny red figures arranged neatly on top of the model. If not for an instantly recognisable reference, we could compare this model to an elaborately designed toy.

The press release defines the task of the exhibition very broadly as aiming “to show how artists transform a flat 2D sheet of paper and make it volumetric”. In fact, an expressive – as opposed to formal – approach to the treatment of materials dominates the curatorial approach and, consequently, most works on display. The catalogue article by Vasilevskaia emphasises a broad range of possibilities allowed by the pliability of paper for the expression of passion, desire, anxiety and other emotions. Vasilevskaia says that paper may be particularly well suited for the dramatic expression of fleeting emotions, because it is “the most ephemeral material, which can be torn, thinned, bent, scattered …”1

Among the most significant works in this category, Vasilevskaia cites Elena Gubanova’s and Ivan Govorkov’s Untitled (2014), a large, irregular paper mound illuminated by a video in such a way that it looks as if it has been set on fire. There is also a Biblical series of Lidia Shul’gin, in which the artist moulds ordinary newspaper into imaginary buildings, as in A House Open on Four Sides (1993); sculptures, as in Looking into the Abyss (1993); or sculptural reliefs and panels, as in The End (1995), Mother of God (1998) or Pieta (2000). All of Shul’gin’s works are inspired by the Bible: it is there that she finds a mirror of today’s world.2 Another artist who mastered expressive properties of paper is Elena Preis; her Duo (2012), imitating a kissing couple, graces the cover of the catalogue. Preis addresses other subjects apart from emotional ones, but even her most abstract works convey anguish and longing, as is evident from The Journey of the Square (2002). Finally, there is an impressive display of White Clothes (2007-12) by Tatiana Badanina – an entire wall of dresses delicately crafted out of white paper. Several of these clothes look like the traditional habits of Russian Orthodox priests, which explains why this work was initially exhibited in a church at a monastic hermitage.3

Despite the exhibition’s conceptual consistency – to show the way paper can be used for its formal or expressive qualities – several works fall out of this modus operandi because of their ironic nature. Curiously, often they are most satisfying visually and intellectually. Apart from Maslov’s tower, mentioned above, they include Olga and Aleksandr Florenskii’s two colourful poles entitled Volodia, Where Are You? (1988) and Sergei Katran’s hilarious Russian Rollercoaster (2012), a sculpture imitating a rollercoaster made from a loose-leaf calendar familiar to anyone who has ever lived in Russia. Objects with a potential design initiative are also remarkable. Victor Lukin’s installation Untitled (2012) is either a column or an arch made from paper triangles that curves precariously over the heads of the visitors, striking for its apparently infinite diversification of form and the fragility of its material. It resembles a set from a futuristic film.

Another turn from the high aspirations of the avant garde towards the low reality of pop culture is marked by the choice of toilet paper as either favoured material or subject for artists’ works. Some of these works are lighthearted and funny – such as Inna Pozina’s video A Stroll with Toilet Paper (2013); some are heavy either in weight – such as Vladimir Kozin’s Toilet Paper (2009) made from tyre rubber – or in meaning – such as Vladimir Govorkov’s perforated sheets (An Old Soldier, 2013; Us, 2013). According to Vasilevskaia, Govorkov carves these shields out of papier-mâché, which he makes by hand out of large amounts of the cheapest kind of toilet paper. This process is labour-intensive and arduous, requiring stamina, persistence and physical strength. Apparently, the artist’s hands frequently bleed after a work session.

Vasilevskaia also included several promising young artists in the exhibition, among them Pavel Brat, Antonina Fatkhullina and Daria Surovtseva. By pulling together different styles, modes of work and generations of artists working with paper, the exhibition promotes the tradition of a material-conscious approach to art-making, which opens up new perspectives on its expressive and formal properties. 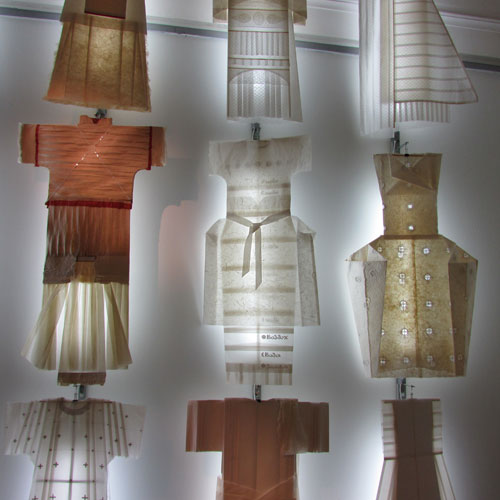 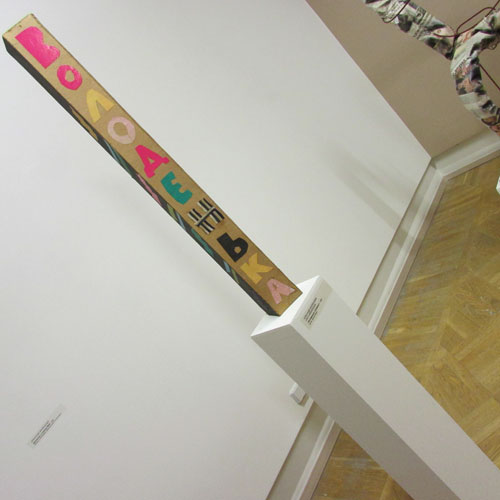 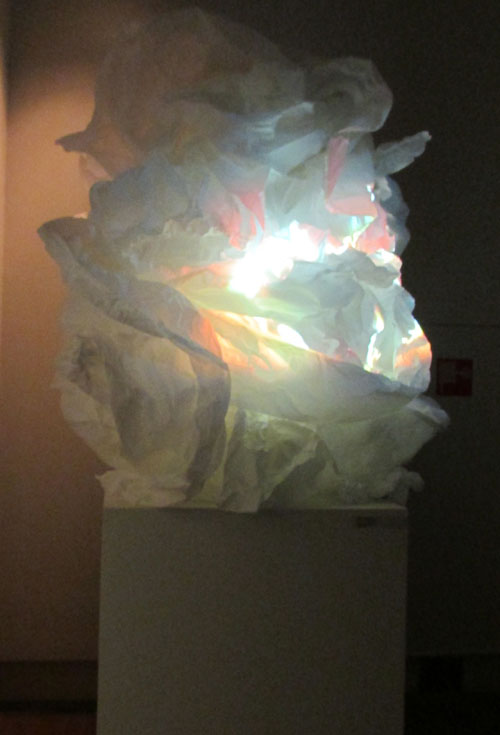 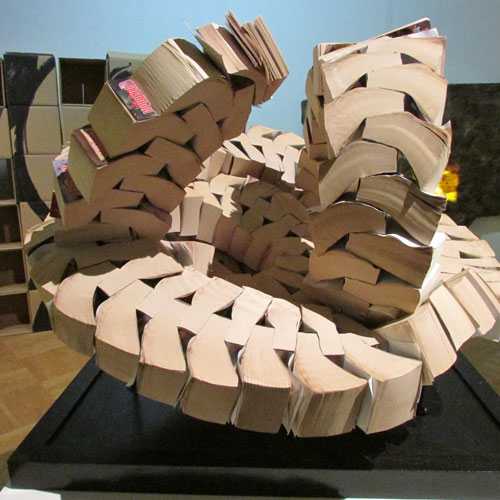 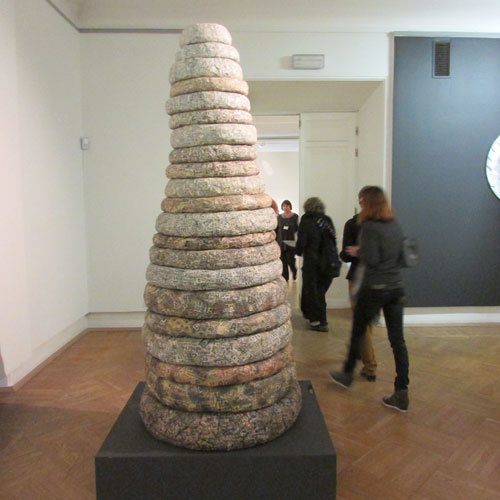 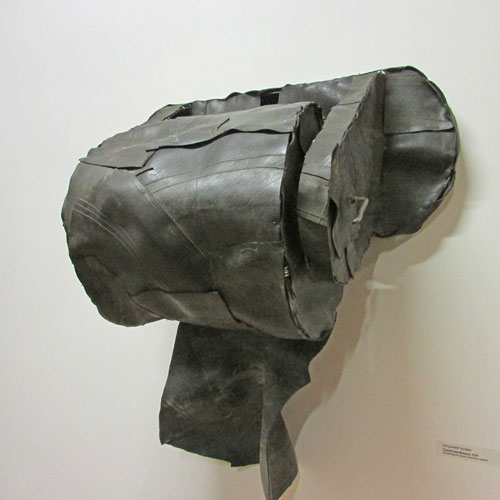 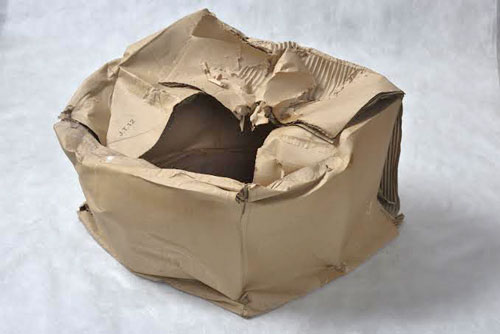 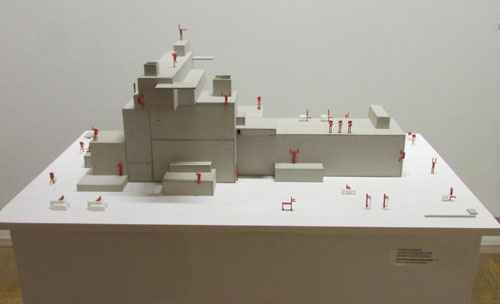 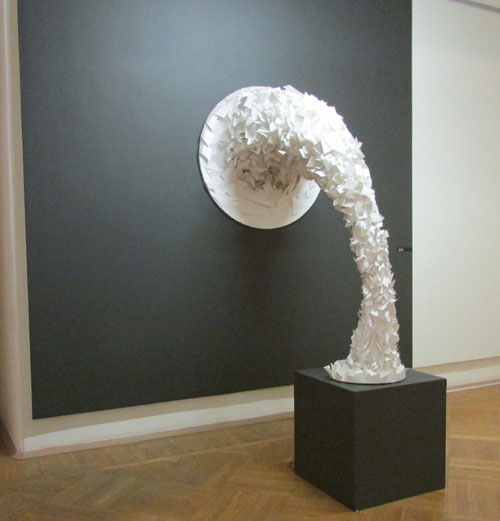 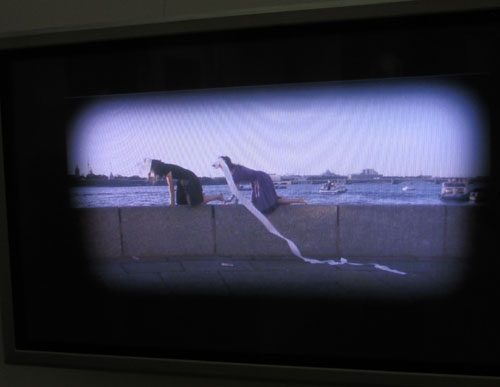 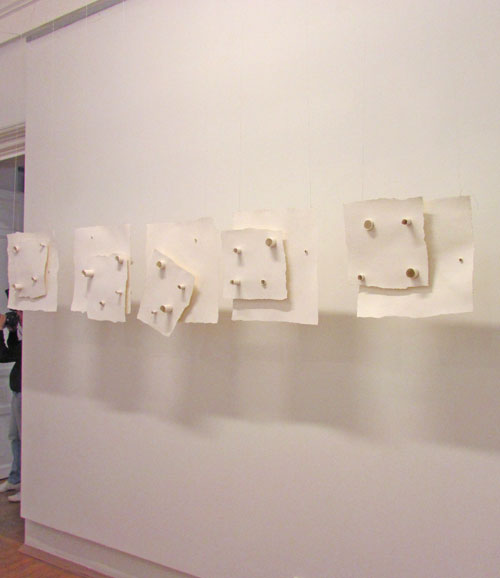 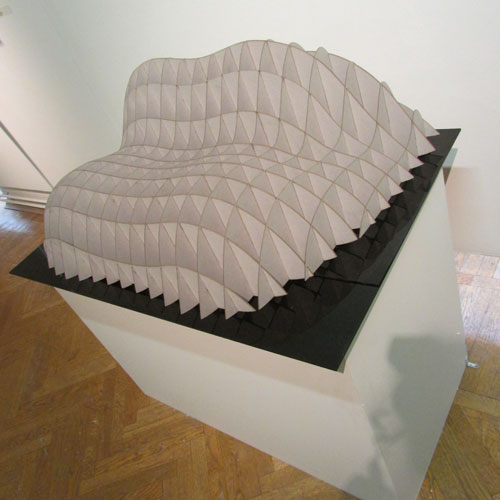 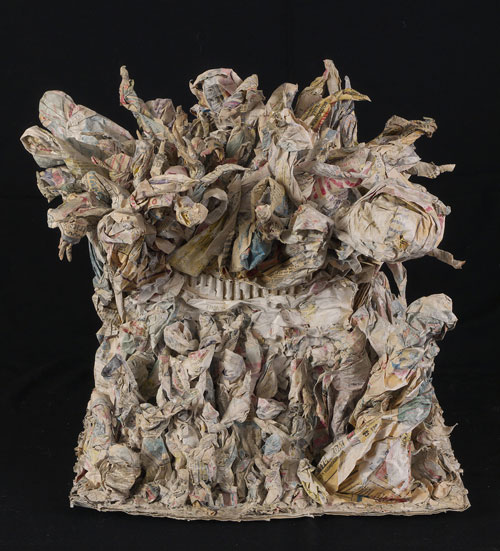 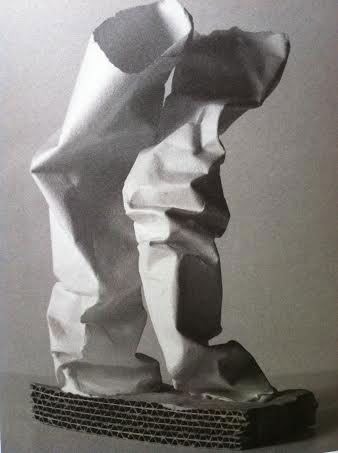