Mat Collishaw: THIS IS NOT AN EXIT

Mat Collishaw: THIS IS NOT AN EXIT

Mat Collishaw is well known for his photographic work and his experimental work in a range of media. THIS IS NOT AN EXIT, at Blain Southern, is the artist’s first show of paintings in over 20 years, and on entering the gallery space it is immediately obvious why Collishaw considers himself to be a painter first and foremost. It was, he explains, how he came to gain a place at Goldsmith’s College, London after a Foundation course at Nottingham Trent Polytechnic. It became clear to him then, that painting and indeed “any form of art making that required its materials to be bought from an art material shop was not thought to be progressive or even interesting”.

Mat Collishaw’s contemporaries at Goldsmith’s included Damien Hirst, Tracey Emin, Sarah Lucas, Michael Landy and Gillian Wearing. He has recently refuted the notion of a cohesive group of Young British Artists, pointing out that they were ‘misfits and dropouts’ who had not by and large applied themselves to formal education before, but were very strong characters. Light bulbs, Aluminium, string, polythene, indeed, anything but traditional media were used. The most radical thing an artist can do now (2013) he believes, is to paint with oils on canvas1. Given Damian Hirst’s recent foray into painting, it would seem that Collishaw is not the only one to realize this new perception of the traditional medium, and, perhaps, a move away from the conceptual art of the 1980s and 90s that became almost as clichéd as New Labour and BritPop. A revival of painting by Collishaw (successfully – perhaps because he never abandoned fine art in the first place) and Hirst (rather unsuccessfully, if one takes Jonathan Jones’ view of his recent odd canvases), suggests a serious cultural shift away – a fatigue, even – from the gaudy consumerism and nihilism that these 90s artists once championed.2

THIS IS NOT AN EXIT, is, of course, a reference to Bret Easton Ellis’ controversial 1991 novel, American Psycho, which was both a criticism and symptom of the subject matter that Collishaw and his contemporaries were, one way or another, involved with. The novel follows Patrick Bateman, the human manifestation of the consumerist 1980s – a raging psychopath, with a day job as a banker. The book caused outrage because it was so violent, provoking debate as to whether Bret Easton Ellis himself was a perverse manifestation of his decade, his upbringing – or whether it was a serious, Dostoyevskian masterpiece, exposing that “dark soul of society” people find so interesting to read about.

“The question, in any case, is whether Collishaw, too – in some respects a Bret Easton Ellis of the visual arts – is a symptom or a cure of this ‘cultural disease’, the roaring nineties. He seems to flirt with the idea, just as he treads precariously between being an outsider or an insider of the YBAs, in both subject matter and his treatment of it. And this most recent exhibition, in its title as in its content, challenges these ambiguities, and challenges that very nineties trap: “THIS IS NOT AN EXIT”. Or is it? Is Mat Collishaw exiting the YBAs, exiting the previous decades artistic stalemate, and exiting the circular trap of being an artist working on decadence? Certainly, looking at the work on show at Blain Southern, there seems some push and pull.”3

Images that are both seductive and repugnant are used by Collishaw to allude to the contradictions of modern life, such as the beautiful flowers that draw the viewer from a distance, only to be startled on getting closer that the blooms have STD pustules; the “flower” that he showed at the 1988 exhibition Freeze, organised by Damien Hirst, when he was 22, was in fact a man’s head with a bullet shot through it. Having been brought up with strict adherence to the teachings of the Bible, these works are a dramatic departure from the views of his parents, who belonged to the Christadelphian sect.

I think it is possible that I started using certain images because they were transgressive, not for my parents, but images that you should be allowed to use in art. Maybe I just got a taste for being transgressive. I was drawn to the illicit. It might have been something that carried on into my art practice.4

Forbidden imagery such as images from pornographic magazines, and strangely macabre images of The Last Meal on Death Row, based on photographs taken in an American prison and printed some 20 years ago in the Sunday Times Magazine, force the audience to address the inherent duplicity of much societal ideology; the spirituality and religiosity both outward and private that can be so terrible abused.  It is not surprising then that Collishaw as a student became interested in Victorian values and history: the outward respectability and piety that the middle classes were determined to represent, existed at the same time as the figures for prostitution, poverty, crime and child labour reached a record high.

Mat Collishaw is intrigued too, by the role of the media in our society, using the Beslan siege to exemplify his observations. In September 2004, Chechen rebels occupied a school in the small Russian city of Beslan, taking some 1,200 people-most of them children-hostage. At the end of three days, over 330 were dead. In those three days the Russian school unwitting became host to the world’s media, which set up camp so that viewers around the world could watch the tragic saga unfold. Collishaw observes that the television audiences globally could gain vicarious identification with the victims, accompanied by an adrenalin hit from the fear and suspense, whilst safely at home. His response to this particular event was taken from classical mythology: Ganymede, where a beautiful boy is snatched by an eagle, which Collishaw then projected onto smoke that billowed out of a font, juxtaposes “pagan imagery with the Christian symbol of induction”. He explains that myths and Biblical imagery have survived because of their potency; their message thus becomes universal. The fascination with darkness, which Collishaw explores in his art, reveals an intrigue for decadence and human nature’s capacity for destruction.

Religion played a very great role in Collishaw’s upbringing: his parents brought up their four sons with very strict adherence to their Christadelphian faith, a small Protestant group. Hours every day were spent reading from the Bible; Sundays were entirely devoted to Church, leading to a comparison, albeit of an earlier generation with Scottish artist John Bellany, whose experience of hellfire and damnation sermons led him to produce iconoclastic images in the tradition of Hieronymus Bosch and Max Beckmann. Collishaw’s family life forbad television, and Christmas celebrations.

When it came to them attending my first art exhibition, when I was 22, I still didn’t feel disposed to give them the full story of what I was up to, so I said to them on the phone, that I had made a picture of a large flower, and then when they came down and got to the doorway of the building where [the exhibition organized by Damien Hirst] Freeze was held and said, ‘What I have here is a picture of a bullet hole through a man’s head’, just because I didn’t want them worrying for days and then on the train down here. But they were actually totally unbiased; they are not people who are interested in art anyway. And the image was a challenging image for people who were in the art world milieu. They were tolerant at that point after 20 years of being battered by four boys, so it has never really been that much of a problem. They see it as being a world apart from the real world, which is I think that they think that if you use a pornographic image in the art world, it is not the same as using a pornographic image in the real world.5

Narcissus (1990) – a photographic work of the artist lying on a muddy road in jeans gazing at his reflection in a puddle – is reminiscent of Rudolf Nureyev, who as a young dancer posed for the same conceptual shot in Leningrad. Escapism is pitched against the harsh reality of life such as the new paintings that establish what appears to be a modernist grid on the canvas, but is in fact created from hundreds of photographic shots that explore the fall of light onto folded scraps of paper from magazine pages, that have been used as cocaine wraps. They are intended as metaphors for the long societal binge, of excess and over-expenditure that has resulted in the present crisis. Like drug taking, life based on credit is a delusion. The empty wraps, carefully painted are according to the artist, depictions of nothingness. Media too in the form of a scrap of magazine is debased, emptied of content. Beslan was his point of departure.

I wanted to make some work about this need or desire or hunger for images of people in distress. It seemed that they sold newspapers, and people watched television. I was becoming aware of the concept of rolling news, 24/7. And there was a particular situation in Beslan in Russia in a school. It ran over several days and it gave time for the media to set up outside, and so we have 24 hour access to the drama. It was just being fed live back to us and you could just keep up with the latest fix. It is also like a reality television programme. Occasionally you would get a child breaking free in his little underpants, he was running from the barrel of a gun straight into the barrel of the camera, then broadcast. It seems unhealthy, but I think when we see such images, it stimulates adrenalin, a flight or fight, like a bear at the end of the cave. It’s a version of that. The adrenalin makes us feel more alive, it’s not a sense of wellbeing but charged by this awful situation, and I think that’s why we get addicted to this …6

Collishaw’s existential void is created with references to literature, photography, the smoke and mirrors of Victorian optical illusionism, advertising, television and conceptual art of his Young British Artists contemporaries.  It is, however, the religiosity and outsider position of his family upbringing that has enabled him to occupy an independent position in contemporary British art – and therefore achieving that elusive, necessary “exit”. By using confrontational imagery sourced from pornography, explicit medical texts and Biblical and Classical mythology, Collishaw continues to present searing images of nothingness with a rare clarity and sureness, and a surprising, refreshing, move away from the white noise of Brit Art and its decadent nineties. The difference, and the exit, is a very subtle one, and a precarious one, and it is a departure that is clearly difficult to make. There is loneliness in making it to the other side. But Mat Collishaw, for now anyway, appears to have done just that.

The exhibition at Blain Southern has been marked by the survey publication, in the gallery’s excellent new series of artist’s monographs, with an essay by Sue Hubbard and an interview with the artist by Rachel Campbell-Johnston. 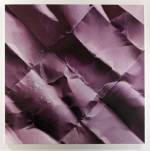 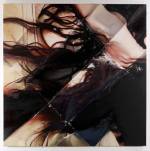 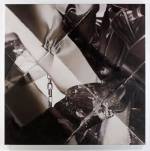