In her work, painter Maryam Najd, who was born in Iran but now lives in Belgium, explores whether the prevalence of the naked female form in the west really represents emancipation

Maryam Najd was born in Iran in 1965 and grew up there. She studied art at the University of Tehran but, after the revolution in 1979, life on many levels had become restricted. It was no longer permitted to see naked bodies and so life drawing was never part of her syllabus – at least, the models were always fully clothed. In 1992, she moved to Antwerp having been accepted to study at the Royal Academy of Fine Arts. Apart from a few years spent in Berlin and New York, she has been there ever since. 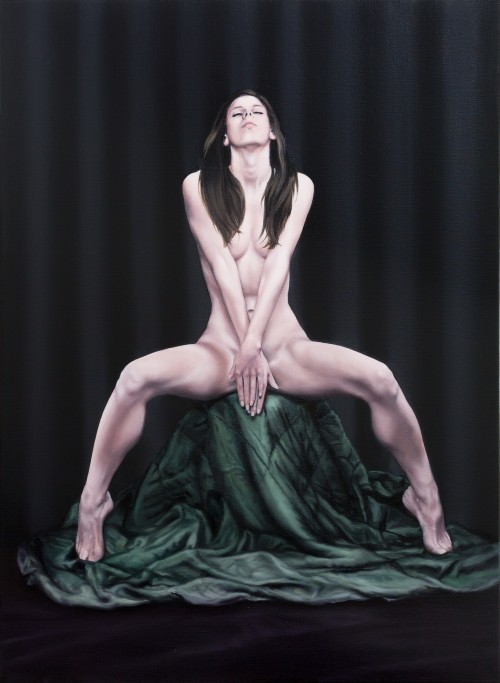 “For me, nudity was something that I had never seen before in Iran. I was touched by it from my very first day in Belgium. It has had an impact on me. The first month at the academy, we had to draw and paint all these models and I was shy even to look at them. I was shocked to see how the nude was represented in society.”

Since then, Najd has found herself repeatedly wondering, in this culture where nudity and naked bodies are so prevalent and where the female form is plastered all over magazines, billboards and television, whether this is part of women’s emancipation, or whether it is, on the contrary, a new form of suppression and shackles – a pressure to look and present oneself in a certain way; a pressure to perform myriad roles, as wife, mother, businesswoman, gym bunny, sex bomb; a pressure to both conform to and stand up against being the object of male desire. Maybe freedom is something beyond all of this. Moreover, Najd wonders where the line is drawn between pop stars, models and performers, who wear tight bodices or scanty outfits and flaunt their bodies provocatively (think Madonna, Rihanna and Beyoncé, to name but a few), and porn stars, strip-club workers, or prostitutes. “Someone like Rihanna, she goes almost naked on to the stage, and we call them ‘artists’, not ‘prostitutes’,” Najd says incredulously. “Do you really need to go that far?” Following this line of curious intrigue, she has been working on a series, or project, the first part of which is currently on show at Galerie van de Weghe, called Accuracy & Balance – with this first instalment carrying the subtitle “West”. 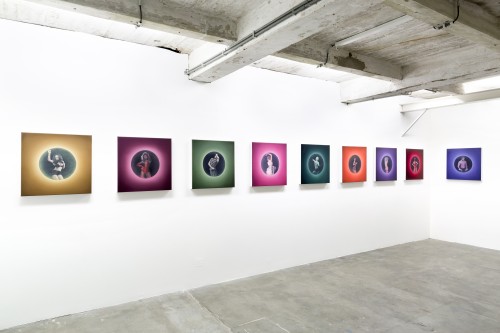 The downstairs room at the gallery is perhaps most obviously linked with Najd’s starting point: nine small oil paintings, Competing Madonna, each following the same format of a square canvas, 60 x 60 cm, each in a different bright colour – like a spotlight – with a central black circle, or peephole, in which an erotic performer struts her (or, in the case of two of the works, his) stuff. Some are recognisable stars – Madonna wearing black leather hot pants and long black gloves and flexing a whip above her head, Beyoncé in a lace-up bodice and suspenders, hair tossed back, hand on jutting hip – while others are unknown faces. One rear view, also in red, is indistinguishable from the Beyoncé image: it comes, however, Najd informs me, from a porn show. The two men are equally confrontational, although there were far fewer images available to work from, when Najd was trawling the internet searching for “beautiful women” and “beautiful men”, “female performer” and “male dancer”. “A lot of the men were ugly and uninteresting,” she says, laughing. Najd wants to continue this half of the project, however, since she believes it is becoming more common for men to be thus exposed – perhaps, she suggests, due to the increasing prevalence and acceptance of homosexuality and transvestism – something else she would like to explore. 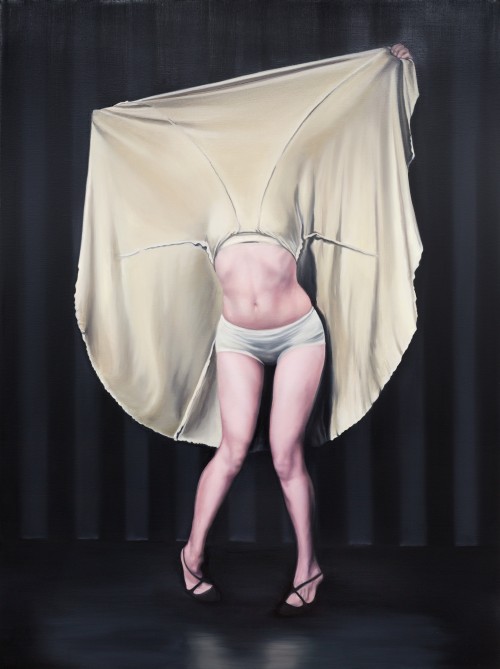 Upstairs in the gallery, her paintings are large – “monumental”, Najd terms them. Three were also worked up from images she sourced online: I was raised to be covered III depicts a fully naked woman sitting, legs astride, head tossed back – potentially in the throes of ecstasy – hands clasped to cover her “self”. I was raised to be covered I has a Marilyn Monroe element to it, with the skirt blown (or, in this case, lifted) up above, concealing her face. Sexy high heels contrast with white cotton granny pants, the subject’s bottom stuck out and knees knocking. The final work in the trilogy, I was raised to be covered II, shows a woman performing a headstand, thong slicing, legs splicing, and vest fallen down to conceal her identity. In each, the women’s skin is translucent, her muscles toned. The works reveal and yet conceal. “For me, covering is still very much a part of it,” Najd says. Interestingly, she is known for finishing her works with a third layer of paint working like a veil, blurring what lies beneath. She has done this on the works downstairs, to add to the sense of its being a peep show, creating a smoky atmosphere, and a sense of peering through at something illicit. In the three works upstairs, however, she has, for the first time, omitted such a screen. Perhaps she feels the women are concealed in other ways. Or perhaps she feels it is time to reveal them – and thus also herself and her technique – more fully. 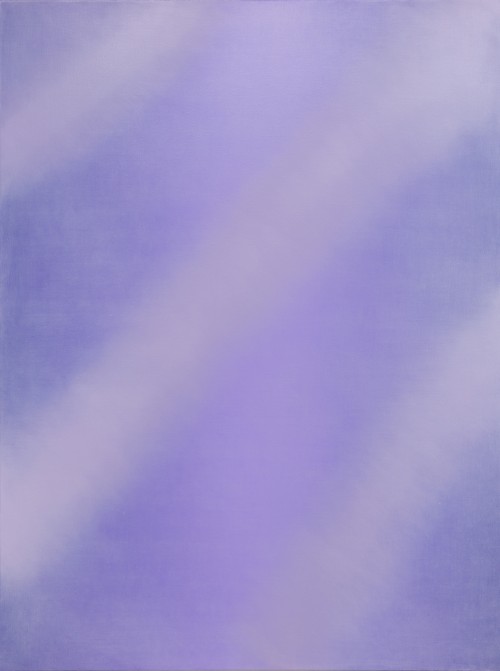 Alongside the figurative works upstairs, Najd has included five abstract works – canvases glowing with colour, each with three layers working together to create a mysterious depth. “I feel I am between two cultures, and I often feel out of balance, emotionally. I wanted to express this duality through the style that I use,” Najd explains. The whole show was pulled together in six months, so she worked quickly. The abstract pieces were produced in the gallery in the last few weeks, as she wanted to see how the others would hang, and then work these up using appropriate colours to bring out the light and dark in the figurative pieces. And it works to great effect.

A final piece, Zan, is made up of four smaller canvases, greenish background with purple-blue torsos. There is something Greco-Roman about them, like classical sculptures, striking a contrapposto. Just one – the only image in the show – fully reveals her breasts. Sculpture was another aspect of art denied to Najd when she was still in Iran. The show thus explores many personal taboos, as well as those recognisable to western natives. Najd intends next year to return to Iran and produce a continuation of, or complementary part to, this project: “East”. What that will explore she is unable to say: “I just want to live there for a while and be inspired, pick up on a subject, start working and see what the result is. I have to see what is the issue there for me.” Equally uncertain is whether or not the veil has now been removed from her work for good: “I don’t know. I think I might continue not putting a layer on. It depends on the subject. I might play with this now. It makes it more interesting.”

Najd is keen to insist that she intends only to raise questions, not to judge. As an observer with a foot in two cultures, her privileged position – balance – and her technical talent – accuracy – lead to fascinating works, which, if the audience takes the time to consider, could be the starting point for serious social consideration and discussion. 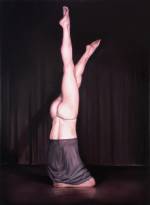 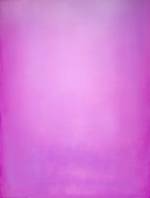 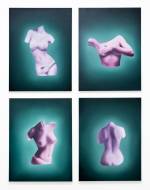