Maryam Najd: ‘I became interested in reaching a certain perfectionism in how you use paint’

Maryam Najd: ‘I became interested in reaching a certain perfectionism in how you use paint’

Iranian-born artist Maryam Najd talks about identity and culture in her practice, her love of materials and her Non Existence Flag Project, which was due to be exhibited in Beijing this autumn, until the Chinese Ministry of Education banned the show claiming the exhibition posed ‘an unpredictable political risk’

The work of Maryam Najd, who moved to Belgium from Iran more than two decades ago, displays her interests in figurative and abstract painting, and her extensive knowledge and appreciation of materials. At one end of her studio, on a long table, many beautifully cared for and variously shaped brushes lay ready for her work; at the other end, by a large easel – an opaque white glass table palate – pots of pigment, bottles of solvents and mediums are arranged in careful order. Resolutely determined not to be fixed or interpreted by the other’s perception of her place of origin, Najd’s images may be said to work towards the possibility of unfixing, perhaps even dissolving, boundaries between entities, whether geographical, conceptual, philosophical or cultural.

Najd talked to us about her recent works, and the concepts behind her practice. 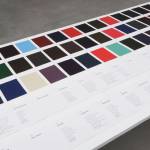 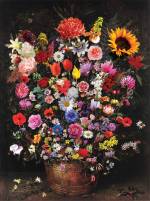