In this solo exhibition, Eder explores cultural value judgments through his kitsch portrayals of kittens, puppies and female nudes, in paintings spanning the past 15 years of his career 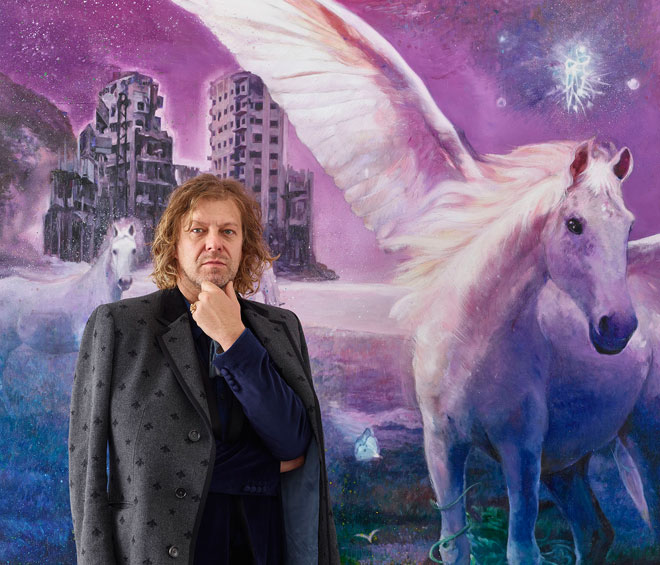 According to the philosopher Michel Serres: “The parasite plays a game of mimicry. It does not play at being another; it plays at being the same.”1 A parasite is a minute being that wheedles its way into an existing infrastructure, be that a biological or social body and, in doing so, intercepts established networks to instigate exploitative relationships for its own gain. For Serres, parasitic behaviour is akin to static on a phone line that interrupts the message. In perforating a network – whatever hegemonic arrangement that happens to be, whose existence is so entrenched as to be assumed autonomous – the act of piercing forces systemic interdependency to come to light, theoretically at least. Martin Eder wishes he were this interesting. 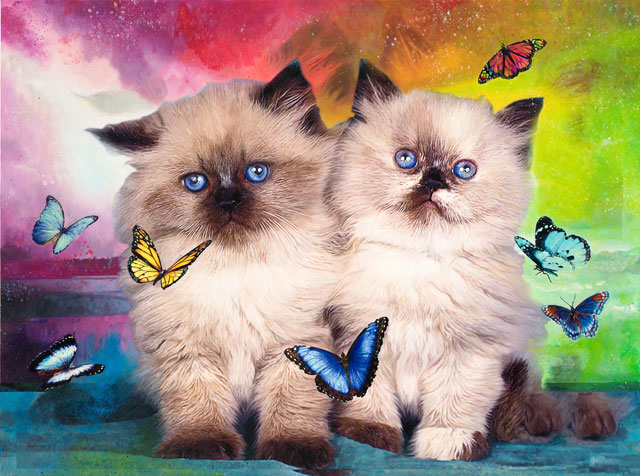 Parasites, a new exhibition of the work of Eder (b1968, Augsburg, Germany), who apparently dabbles on the side in magic and is a qualified hypnotherapist, is billed as a “biography” of his artistic career to date, covering the past 15 years. Although his practice also encompasses sculpture, photography and performance, the only kind of work on display at Damien Hirst’s public gallery are lurid oil paintings; more than 50 of them, dating back to 2003, some of which have been reworked during the past year. They vary in scale, but often err on the side of being massive, the largest few measuring 285cm x 380cm, because, of course, how can one begin to dismantle taste without first blowing it out of proportion? 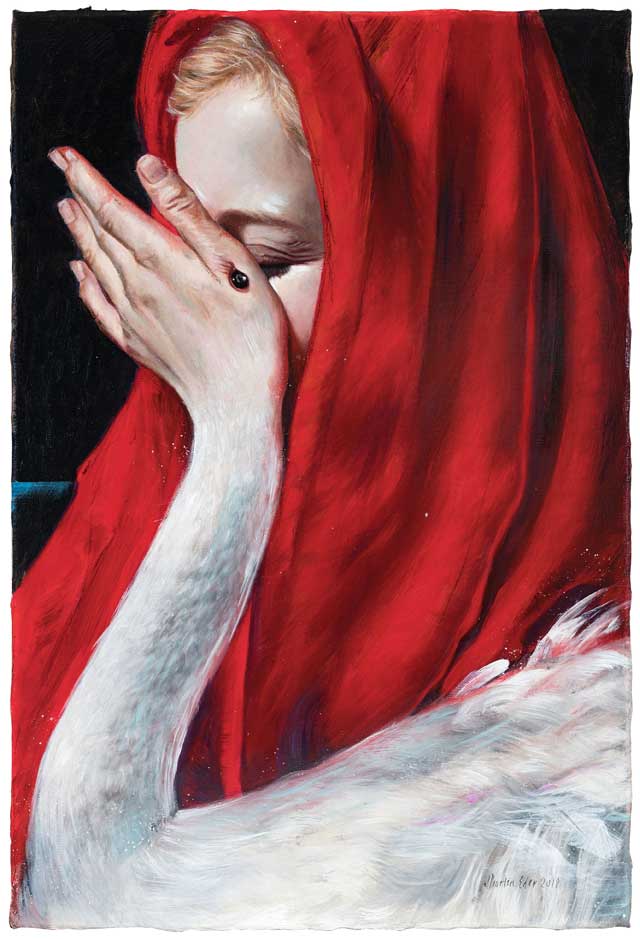 Eder professes to be very much interested in cultural value judgments and the relativism of beauty in the history of art, criticising the “standardisation of the body” in visual terms.2 He latches on to “visual platitudes”, corralling kitschy animals and semi-dressed teens into the field of his artistic practice. In doing so, Eder flattens diverse visual references together in the hope that his work passes as a profound redress to what he terms “stupidity”.

The impact of the first room relies heavily on hetero-fantasties of intergenerational lust; one of these, Gateway to the Galaxies/Paradise (2018), shows a young woman with blond bunches looking at her pants uncomfortably in a full-length mirror, while from within a wardrobe a clothed, middle-aged man leers at her, his nose protruding like a rubbery prosthesis. Adjacent is The Reaper (2013/18), a grim little rabbit wielding a scythe and with its gaze levelled at the neighbouring composition, cast as either a furry harbinger or long-haired accomplice. 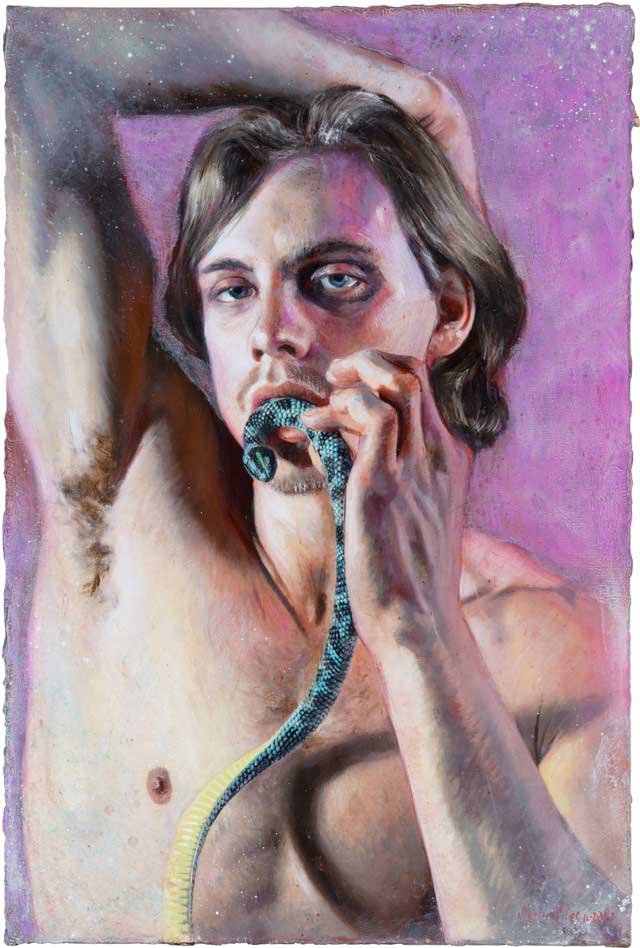 And so it goes on, with undressed female bodies, often young, contorted or possessed, littering every eyeline. Male figures quickly disappear from the images, replaced by domestic animals. In More Stars than Skies (2018), a girl (again, with bunches) sits cross-legged next to a fluffy cat whose eyes have an uncanny resemblance to Eder’s, rendering the nonhuman gaze a metonym for human perverted self-gratification. 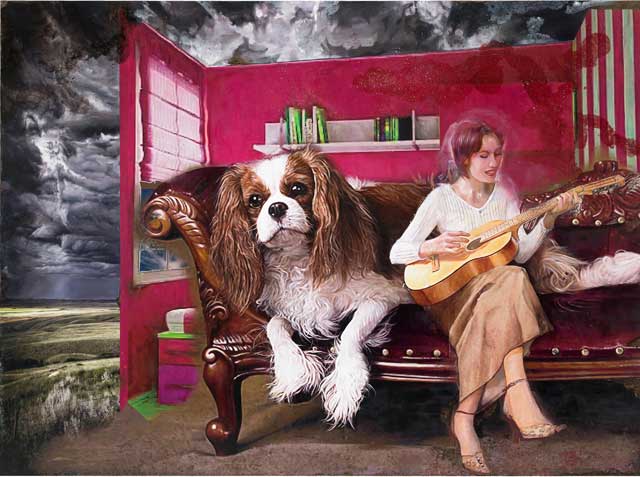 In a number of works, domestic animals are the sole subjects, floating above an ethereal backdrop and staring blankly outwards. Both Lunacy and Catastrophe (each 2018) are enormous, oversaturated ensembles that layer furry cats with big eyes, and butterflies or raffia baskets, over apocalyptic skies. Eder has invested the faces of the felines with a measure of dead-eyed portent that is also shared by his soft-focus poodle in Psyche (2009/18). 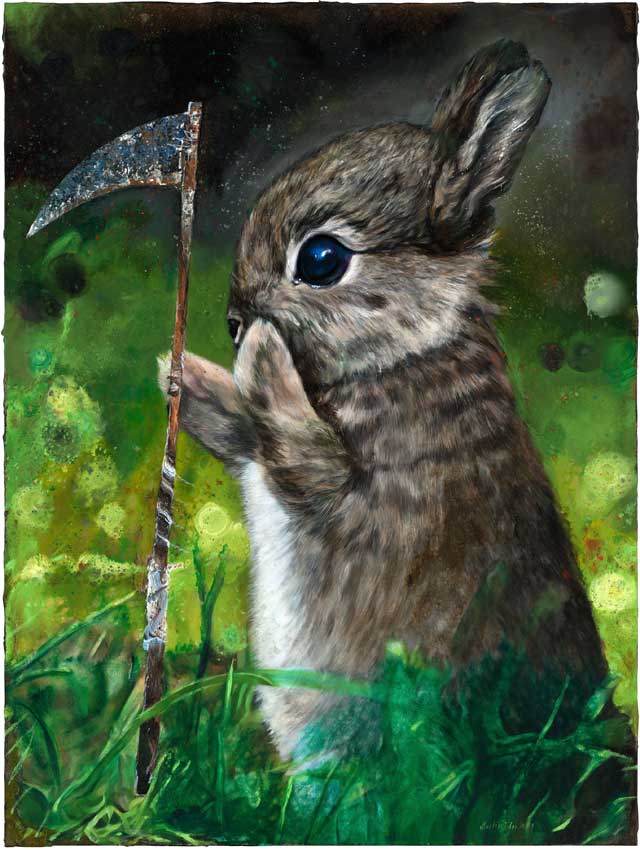 Anthropomorphising domestic animals is nothing new and Eder is clearly engaging with the the kinds of infantilising or syrupy aesthetics closely allied to sentimental Victorians and, more currently, the ironic ridicule commonly expressed through internet memes. He paints what he refers to as the “stupidest subjects”, using fluffy cats and dogs in combination with images of schmaltzy or sexualised femininity to represent the kind of banal divertissement he seeks to criticise. Eder claims to take a scientific approach to his varied subjects, but replicating various forms of misogynistic image-making with a self-professed “surgical” eye does not automatically ensure an insightful dissection of these tropes – more often, it just perpetuates them.3 Anything between teen model and the mawkish guitar strummer of The Inescapable Unity of Love (whom I imagine is singing a folk-country medley) are ripe for Eder’s derision as he attempts to critique the saturation of contemporary visuality. 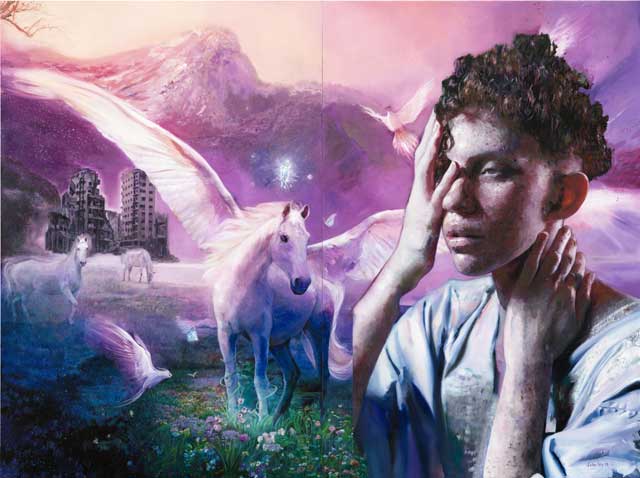 Strangely, male figures hardly feature in the exhibition. In trying to explain away the absence of male nudes, Eder is quoted as saying he had simply “forgotten” them, presumably because he was so dazzled by what he calls “more interesting evolutionary artefacts”, a phenomenon other people know as women.4

Not all Eder’s paintings are preoccupied with nubile female bodies, however. A number of them, which he fondly refers to as his “ass paintings”, offer a saggier, pallid alternative to the pervasive teen erotica. Rainbow (2013/18) is but one example of this strand of his practice, in which women’s bodies are truncated and sickly looking, all green hues and sweat-slicked. Not much sign of actual engagement with these bodies either, then, or for the armour-clad subjects that line the walls of the final room. Here, with Imagination/Imaginación and Erinnerung/La memoria (both 2016) Eder plays off fanart genre images, the festishised, voluptuous kind you get after scrolling five pages into a Google image search.

The subject matter and curation of Parasites is so against the grain that it comes across as a try-hard exercise in painterly trolling deliberately intended to shock. Despite that driving force, the theoretical underpinning is muddled and obscures any evidence of the eponymous parasites apparently dwelling within this exhibition. Ultimately, Eder casts himself as the parasite, that which lives alongside and grows fat in the process, which is obviously awfully provocative: but, he says: “At least I am a parasite that paints a picture while feeding on its host.”5 Lucky us.