From his collection, Damien Hirst has produced a tribute to the passionate and visionary work of two Scottish artists he admired 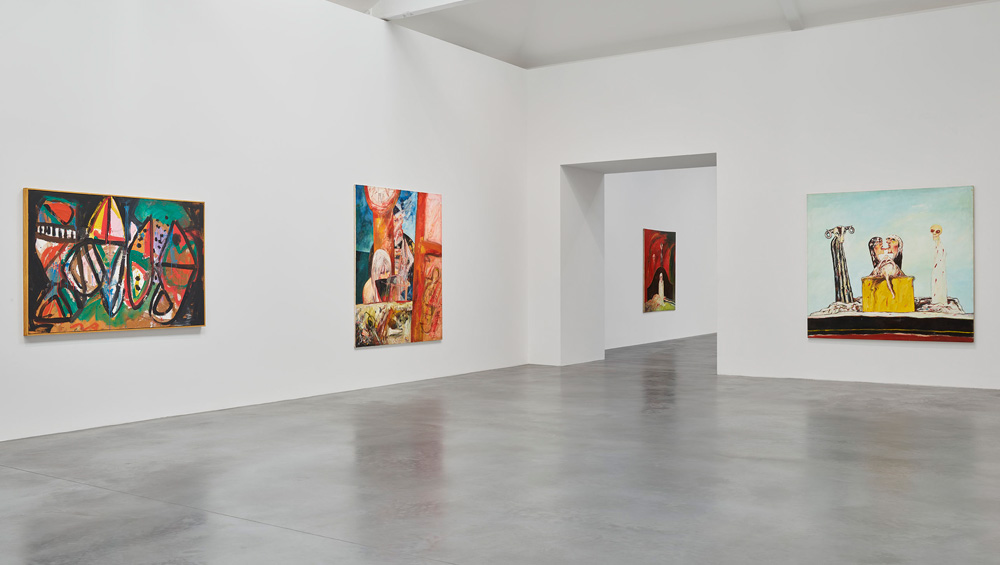 Cradle of Magic at Newport Street Gallery, London, presents the visionary work of two Scottish artists, John Bellany (1942-2013) and Alan Davie (1920-2014). Immediately recognisable in terms of figurative content and stylistic coherence, their painting was unique in Britain in their lifetimes and has occupied an important position since their deaths. For some years, the preoccupation with postmodern theory compromised the appraisal of their work: Bellany worked in an expressionistic mode and Davie created art that drew on music, universal symbols and archetypal forms. Although Davie was influenced by American abstract expressionism, he remained independent from mainstream movements. In Damien Hirst’s extensive gallery, the juxtaposition of their original and powerful imagery and their passion for the very act of painting also reveals Hirst’s own first love of painting. Having collected their work since the late 80s, Hirst reveals a fascination for Celtic culture and symbolism and the manner in which art can be seen to play a regenerative role for individuals, with universal ramifications.

At the south London gallery, which opened in 2015, and won the Stirling Prize for architecture in 2016, Cradle of Magic sees the realisation of Hirst’s ambition to share his collection of more than 3,000 artworks and also his interest in curating that began with the London exhibition Freeze in 1988. Through his splendid gallery spaces, Hirst pays tribute to the artists he held a passion and respect for as he himself emerged as a pivotal figure in the British art world. Cradle of Magic comes primarily from Hirst’s private collection spanning four decades. Most noteworthy are Bellany’s remarkable, prescient works from the 60s, painted after visiting the concentration camp of Buchenwald. On show is the spectacular and fearful Homage to John Knox (1969). The exhibition is worth visiting for this phenomenal triptych alone. A fully illustrated catalogue with an essay by the art historian Mel Gooding and transcripts of the Artists’ Lives interviews from the British Library’s oral history project contributes to the scholarship on both artists.

Bellany and Davie shared an intense passion and phenomenal energy for making works that are an affirmation of life and of the creative act; on the other hand, in Bellany’s work there are images of potent despair and violence, such as Pourquoi? (1967). The sheer output of both artists is extraordinary. Davie is quoted as producing 10 large canvases a day.

Twenty years Bellany’s senior, Davie was born in 1920 in Grangemouth. He attended Edinburgh College of Art from 1937, where he was perplexed by the lessons that focused on the precise rendering of still life and the nude. He recalls being told: “Oh, you can’t do that, you’ve got to start at the beginning. You’ve got to learn to mix up the right colours and match the tones, and paint exactly what you see, it takes time to learn these things.”1 A travelling scholarship, however, enabled him to visit western Europe in 1948 and there he was deeply affected by Renaissance, Byzantine and Romanesque art. In Romanesque art, he identified connections to the Celtic tradition. He attended the first postwar Venice Biennale, his initial encounter with American abstract expressionism through Peggy Guggenheim’s collection, which included Jackson Pollock and Mark Rothko.

It is significant that Davie was an accomplished musician. In his painting, he employed a gestural improvisation informed by jazz and he spoke eloquently about the importance of automatism: “I think the whole modern movement of that time – the 50s – stems almost straight from surrealism. You know, the idea of automatic working, and using images which didn’t rationally come together, and bringing together all sorts of things out of the unconscious.”2  He and his peers – artists, musicians, poets – were greatly interested in Zen Buddhism: “The more I learned about Zen Buddhism, the closer it seemed to be to my own experiences of painting; that one had to let the painting paint itself at the right moment. You couldn’t force it. Zen Buddhism was a confirmation of something which I was building up in my own ideas about the nature of creativity, especially in the study of my own work.”3 For Davie, the Zen painter prepared his materials and emptied his mind of all preconceived ideas, thus enabling the creation of work that was spontaneous, intuitive and devoid of premeditation. Liberating the subconscious flow involved working quickly and this was aided by the use of liquid paint on the floor, and this he did before encountering the work or methodology of Pollock or Sam Francis.

Cradle of Magic exemplifies Davie’s fascination with symbolism and symbols. The manner in which symbols are universal and recur in numerous civilisations produces connectivity and a dichotomous tension. Davie’s work can be interpreted using the archetypal language of Carl Jung (1875-1961), who himself made an independent study of symbols and Celtic visual culture. Trio for Bones (1960) captures Davie’s colossal freedom over, and command of, the picture plane, replete with symbols and vibrant colour. The Horse That Has Visions of Immortality No 3 (1963) comprises archways (portals to the unknown), diamonds, crosses and framed devices that created pictures within pictures, a powerful image of subconscious free association.

As his understanding of his own subconsciously informed imagery increased, it provided clarity and focus that in turn enabled a great surge of image-making. Parallel to a colossal output in visual painterly terms, Davie was involved with “free music”, which had developed out of jazz, as an attempt to create a form of pure sound. On the occasion of an invitation in 1971, from the Tate Gallery, to talk about his painting, he chose to take a group of musicians to the lecture room to create music in response to the paintings. The interchangeable roles of music and painting are critical to Davie’s career and they sustained his outpouring of visual forms: “As soon as I make a few notes on the piano, I start inventing, start putting notes together and making tonal sequences and melodic lines. Sort of instinctively, it all comes together. In the same way, as I’m making marks, images start to appear.”4

Bellany was born in 1942 in Port Seton, a fishing village on the North Sea, east of Edinburgh. Like Davie he attended Edinburgh College of Art and also asserted a rebellious spirit. Bellany’s great moment as a student was the discovery in a shared studio in Rose Street, Edinburgh, of an ottoman filled with engravings of old masters that he used as the basis of a detailed study of the history of art. He also frequented the National Gallery of Scotland, where he drew from old masters.

Like Davie, Bellany was a musician, playing piano accordion in a band. Both artists drew prolifically from a young age and both were nurtured and encouraged in their choice of career by their families. Bellany describes his upbringing in Port Seton as idyllic, yet his early work reveals the dichotomous character, too, of life in the strict religious community. After Edinburgh, Bellany attended the Royal College of Art, London, from 1965 to 1968. In 1967, he travelled to East Germany on a scholarship and visited the concentration camp at Buchenwald, the most poignant experience of his early career. There, he confronted the issues of death and dying, of man’s capacity for evil and the individual’s essential capacity for survival against personal odds, in a wholly original, deeply personal manner.

Bellany belongs to the tradition of Hieronymus Bosch (1460-1516), Pieter Bruegel (1520-69) and Max Beckmann (1884-1950); and more recently that of Oskar Kokoschka (1886-1980) and the Australian painter Arthur Boyd (1920-99). Bellany’s early work is the product of his maritime upbringing in Port Seton and Eyemouth near Edinburgh. Acutely aware of the dangers of life at sea, Bellany was attuned to issues of mortality from a young age. Celtic Voyage (1972) shows his sense of connection to the rich life of his forebears, and of Scottish culture.

Bellany had an affinity for all living creatures, so that the mortal threat within his own family in the fishing community is in stark contrast to the need to achieve a harmonious relationship with people, animals – indeed, any form of life. Grotesque images of beasts killing and being killed are charged with fear. The bestiality implied in killing other creatures for one’s own survival is in stark opposition to Bellany’s very nature, which sought to attain oneness of being. Bellany’s deeply felt generosity and identification with those suffering takes on a poignant and powerful form. Sexual guilt, the “Devil in the bottle”, gave rise to the tormented images in his paintings and reflected the personal torment, which was made manifest in alcoholism. Images such as The Journey (1989) and Death and the Maiden (1990) are key to his oeuvre.

Bellany’s harrowing images were at odds with abstract painting, and the 60s counter-culture. When I interviewed him in 2010, he recalled that, following the visit to Buchenwald, it took him many years to reconcile the experience of the Holocaust, and he was only able to do so through the creative process, through the visualisation of the sense of the dichotomous – horror and beauty – that constitutes the human condition. This prolific output, which did not diminish through illness or age, was typical of Bellany’s relentless struggle to make sense of the split between the love found in family bonds, in nature, in the human spirit in many instances, and the abject terror and evil that humans are capable of. These polar opposites drove him on a daily basis.

To reinforce the profundity and urgency of his message, Bellany took his cue from literature such as Samuel Taylor Coleridge’s The Rime of the Ancient Mariner (1797-98), Herman Melville’s Moby-Dick (1851) and Ernest Hemingway’s The Old Man and the Sea (1952). The white whale in Moby-Dick symbolises man’s quest for truth and satisfaction. The whale is also presented as a sea-faring monster; it alludes to the capacity for the sea to give (a livelihood) and also to destroy. In using the whale as a symbol of God’s power, Bellany is deliberately casting his imagery in an epic and allegorical mode. Where Hemingway’s symbolism exemplified transcendence by turning loss into gain, defeat into triumph, and even death into renewed life and redemption, it is the creative process itself, that Bellany clung to in adversity and which enabled him to find respite from despair.

1. From an extract from Artists’ Lives, quoted in the Cradle of Magic catalogue that accompanies the exhibition.
2. Ibid.
3. Ibid.
4. Ibid.