Mark Rowan-Hull's abstract paintings form a dialogue with music. Firstly a pianist, Rowan-Hull (born England, 1968) has an intellectual approach to his artistic practise that links aspects of visual art and music. 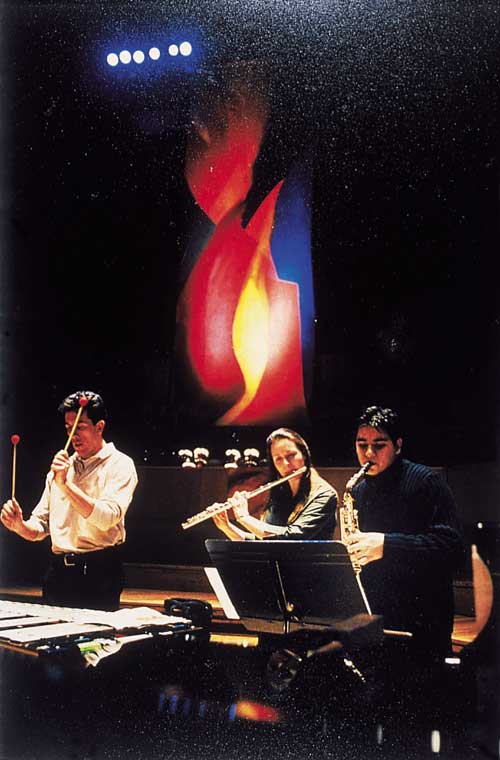 In a lecture, which preceded the concert of Dvorak and Mozart at the Jacqueline Du Pre Music Building in Oxford on 30 April this year, Rowan-Hull revealed his long-standing interest in the relationship between the visual arts and music. He is particularly interested in the work of artists who cultivated interlinking relationships with other art forms. Rowan-Hull feels a particular affinity for the French composer Olivier Messiaen who died in 1992. He is interested too in literature and poetry, and the titles of his works often contain literary references. The world virtuoso organist Dame Gillian Weir, also an expert on the work of the French composer, described Messiaen as, 'The inimitable painter of sound'.1 Rowan-Hull describes his encounter with Messiaen thus:

I could sense the bold colour, juxtaposed shapes and fluid movement and a similarity in thought to what I was trying to achieve as an artist. Following further listening and reading about Messiaen I discovered that not only did he think of colours when composing (often indeed notating the score in terms of colour) but also interestingly, that he experienced a joining of the senses known now as the clinical condition synaesthesia.2

We all understand descriptions of music such as brightness, colour, texture, movement density and lightness; linking vision and touch with sound. With synaesthetes these are not only mere metaphor. They are real experiences. Many people have sensations of colour associated with words, letters or sounds.4

Rowan-Hull prefers so-called discordant and atonal music composers such as Messiaen, Charles Ives and Arvo Part and finds that the music of these composers stimulates colour, shape and texture. In the last 15 years, brain-imaging techniques have made it possible to establish that synaesthesia actually exists. Historically, many composers, artists and writers have been interested in the relationship between art, music and the spiritual and intellectual significance of colour. 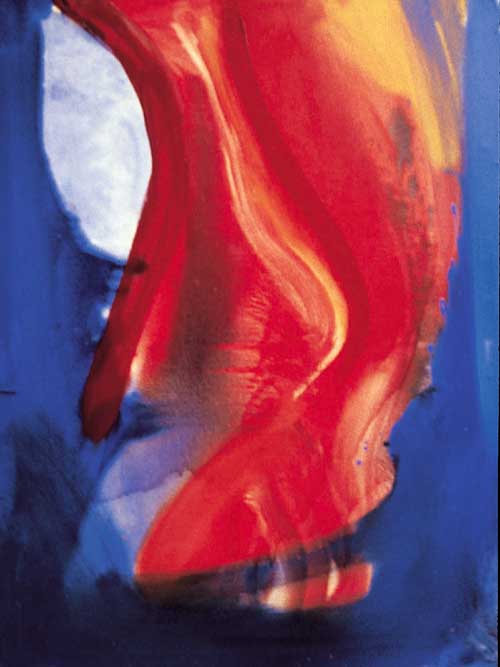 Symbolist painters were particularly interested in synaesthesia. Baudelaire's poetry as well as his study of Delacroix and the Romantic artists' chromatic concerns provided considerable inspiration.5 The Russian artist Wassily Kandinsky (1866-1944), one of the most important pioneers of abstract art and theory, took various strands of 19th century aesthetics (with its emphasis on synaesthesia) and produced a comparison of the fundamental elements of one art form with those of another. On the Spiritual in Art is one of the most important texts for abstract art. In it Kandinsky foresaw new 'symphonic compositions' as represented by his superb paintings entitled: 'Impressions', 'Improvisations', and 'Compositions'. The trumpeter of the Apocalypse, in a number of key works, reinforces Kandinsky's references to music. He wrote:

A painter … in his longing to express his internal life … naturally seeks to apply the means of music to his own art. And from this results that modern desire for rhythm in painting, for mathematical, abstract composition, for repeated notes of colour, for setting colour in motion, and on.6

Colour has been inextricably linked with music since the time of the Ancient Greeks who constructed a scale of musical notes divided in seven parts on the analogy of the seven colours and the then known seven planets. There has been much music associated with colour, however, it was Messiaen who reached a precision of marking single chords with specific colours, in particular his 'Couleurs de la cité Céleste', and which remained a constant throughout his life's work.7

The organ work of Messiaen is an important source for Rowan-Hull's recent paintings:

… because the organ is such a uniquely visual and colourful instrument on which Messiaen improvised and composed on his themes of colour and religious belief. Indeed, the organ throughout history has been associated with colour and indeed sometimes directly, with the creation of a colour organ by the Jesuit priest Bertrand Castel in 1743 and later Rimmington in the 19th century whose ideas led Alexander Scriabin into using colour accompaniment in his 'Prometheus', the poem of fire in 1908. I often feel that playing the organ must be akin to painting a vast canvas with [one's] back to the audience and a vast sound audible and visible.8

'Seeing Music, Hearing Colour', is the product of Rowan-Hull's recent work that takes as its cue, Messiaen's organ work. The artist's collaborative events, which involve Rowan-Hull painting 'live', to the music enable the viewer to be surrounded by colour and sound simultaneously. In 2002, he was invited to produce two large canvases for a concert to mark the tenth anniversary of Messiaen's death, at the Royal Festival Hall. They were painted in situ whilst listening to the organ piece 'Messe de la Pentecôte'. Simon Tait described them. 'Thirty feet tall their blazing primary colours either side of the concert platform brought another dimension to the music.' (The Times, 27 January 2004)

Messiaen himself had a great affinity with and particularly admired the ground-breaking abstract painting of Robert Delaunay (1885–1941). Delaunay was particularly interested in the interaction of large areas of juxtaposed and contrasting colour. The interconnections between colour and movement were of particular interest. Both Delaunay and Messiaen used stained glass windows as a source of inspiration. Apollinaire gave the name 'Orphism' to Delaunay's work, which by 1902 had developed into a completely abstract style, and exerted considerable influence on the German Expressionists, and Kandinsky. Kandinsky went further, from a theoretical point of view, in developing an abstract system of painting backed up by writings on non-figurative abstraction, alongside his philosophical views on the nature of art, theosophy and mysticism. In doing so he established himself as one of the most important pioneers of abstract art. Kandinsky went so far as to suggest that synaesthesia could be produced by exercise. 'He thought that by screening off accidental impressions, a procedure that is the classic preliminary to mystical meditation, one could learn to receive higher stimuli.'9

Rowan-Hull takes his cue from the fine tradition of intellectual artists and writers who were influential a hundred years ago, and who exerted a profound impact on the development of 20th century painting. In his own work, Rowan-Hull sees many parallels in Messiaen's work:

Firstly, with the translucent medium of gouache and acrylic paint on paper. This technique often recreates the effect of stained glass which Messiaen was so inspired by. Working with this coloured light there is a sense of a constant meditation on the relationship between 'the power of lightness to the powers of darkness', and visa versa. In Messiaen's music there is always what is described as an 'intermingled afterglow'. This is akin to what one sees when looking intently on one colour surrounded by that of a neutral colour and seeing the complementary colour singing out. For instance, if one stares at a square of, let's say, a bright red surrounded by a flat grey, the grey will start to become the complementary colour … a light green.10

In Messiaen's music Rowan-Hull is also conscious of the processes involved in collage, which he also uses:

Collage is intrinsic to his way of composing in that he uses colours and indeed notates them building them up in clusters and blocks of sound, juxtaposed with eastern rhythms and birdsong. This creates the overall effect of a huge collage and a transgression of the particular natural world, linking with another cross-sensual world beyond.11

Rowan-Hull also paints to the jazz music of Miles Davis; in 2003 he produced paintings on stage during a concert.

A similar collaborative improvisation was performed at the Art Gallery of New South Wales in 1991. Australian jazz musicians Roger Woodward and James Morrison and artist Ken Done, performed, 'Playing on a Magenta Reef' (1991). Although Done belongs to a different artistic tradition (Matisse, Bonnard and Patrick Heron) he has collaborated with his great friend James Morrison on a number of projects. Done's abstract painting, somewhat overlooked by the Australian art world, are created in a passionate, intuitive manner. Many of his Sydney paintings concentrate on the visual form of the Opera House and allude to the musical forms that he aspires to in his lyrical abstract paintings. In 'Sydney by Night' (1995), Done actually places musical quavers and notes on the canvas. Done explains, 'Sydney by Night' is a piece of music that James Morrison wrote to my painting of the same title. We did an album together, he wrote seven pieces of music to seven of my painting.'12 In the painting 'James and Don at the Opera House' (1995), Done refers to his close friends James Morrison and Don Burrows, two of Australia's leading jazz musicians. In the place of the pylons of Sydney Harbour Bridge, Done has created musical quavers and the lines of the bridge become a somewhat stylised musical score: 'I put James's trumpet upside down in the top right-hand corner. The Opera House is spikey and boppy because it was a big jazz concert they were playing and I was trying to find the painterly equivalent of the feeling of that particular evening.'13

Much of Rowan-Hull's recent work is inspired by the mystical, natural and divine love inspired by Messiaen and other composers. He uses provocative titles as a cue to the viewer as well as passages by poets such as Gerald Manley Hopkins, Seamus Heaney, Douglas Dunn and in particularly Tom Paulin, a collector and admirer of Rowan-Hull's work. Paulin has also written imaginative and profound poetry, which reflects, and focuses on the improvisatory and creative thought in painting, particularly in his books of poetry such as, Walking a Line (1996) taken from a quote by the abstract painter Paul Klee. In Fivemiletown, (1987) he wrote, I Am Nature: Homage to Jackson Pollock 1912-56.

and my first cry was Scotch-Irish
a scrake
a scratch
a screighulaidagh.14

Tom Paulin says that 'Rowan-Hull's work is refreshingly, "in the moment" and that most importantly that he understands all that Baudelaire meant by correspondence.'15

I use passages by these poets because their work is cross-sensory to me and often becomes very visual and musical and can create a literary link with what I want to express. For these recent paintings I have been using a motif from the wonderful West Door at Iffley church. When I re-examined this church, after hearing the music of Messiaen I immediately linked the idea of the heads becoming beaks around the door to the other worldliness and strange ethereal quality of the Turangulîla symphony. When one hears, eastern rhythms and unearthly sounds together with the natural and attainable.16

'Seeing Music, Hearing Colour' is a refreshing and inspired body of work by a young artist. It will be on show at the Barbican later this year where Rowan-Hull will also be 'performing' as a painter to specially commissioned new music depicting colour by contemporary composers such as Anthony Powers and John McCabe. 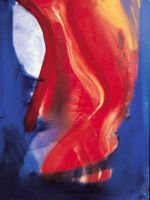 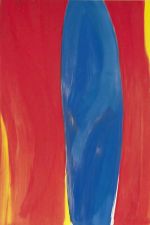 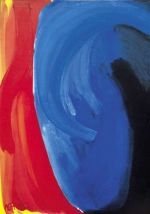 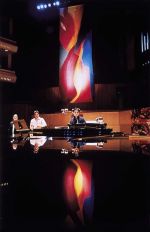 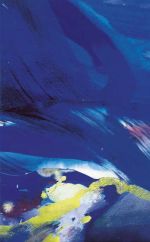 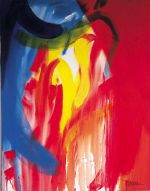 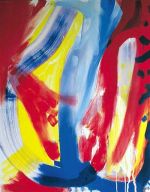