Marion Borgelt’s (b.1954) spontaneous mark and image making was included in "New Drawing in Australia", in Studio International, No 1015, 1987. The drawings then, had been done when she was a student of Nick Carone and Mercedes Matter at the New York Studio School, where there existed a strong link between Australian artists, through the Peter Brown Memorial Fellowships. At the New York Studio School the teaching of Nick Carone specialised in the teaching of academic drawing informed and inspired by Cubist principles. Borgelt was encouraged to explore the malleability of space within the picture plane, and to explore the open structure of objects, given that the picture-plane had been liberated from illusionism, by the Post-Impressionists.

Carone emphasised the need to understand the structure of forms before opening them up and endowing them with a reality of their own. Borgelt’s work in the 1980s reveals the manner in which she penetrates the objects and fills them with air, thus alluding to the inner voice of her subject. At the same time, no one part of the picture-plane is regarded as more or less important to another. For Borgelt, drawing then was the closest and most immediate way of capturing a complete experience. It is very special because it is so fast and so spontaneous: no preparation is required and so nothing gets in the way. “The beauty of the mark”, she explained (1986) “is as close as who you are. It is closer than a word because words are part of an organised language. It’s raw like a musical note or dance movement … Drawings don’t come from the mind because thoughts reduce the spontaneity felt towards an experience … The perception involved in drawing is like a third eye – it comes from within us and it is infinite.”1

Marion Borgelt has since the 1980s become a key artist in Australia, and has exhibited widely there and overseas. Her work has developed in an original and exciting manner, with a wide range of preoccupations, and a wide lexicon of symbols and motifs, that represent personal and universal interests. Her work draws inspiration from a range of fields: semiotics, language, optics and phenomenology. Primal urges and fantasies are created using painting, sculpture and installation. Her work occupies a space between culture and nature, between man-made and the organic world. She alludes to essential dualities in human existence: the relationship between individual and community, light and dark, using an intensely personal combination of material and form. Seeking material manifestation of the state of flux in nature, and human experience, her work pays homage to the philosopher, Heraclitus who said: “Change is the only constant, nothing endures but change itself.”

The exhibition Marion Borgelt: Mind and Matter at the Drill Hall Gallery at the Australian National University in Canberra, surveys 15 years of her work. In 1998 Borgelt returned to Australia, having lived and worked for eight years in Paris. She recalls the most important thing she learned was to be resourceful and self reliant, without familiar support systems. In Paris her work developed in a new direction, becoming more intellectual. Her intuitive, spontaneous mark making gave way to consciously cerebral processes.

“Drawing on experience with a wide range of materials, including bees-wax, canvas, felt, pigment, stainless steel, wood, stone and organic matter, she hones her ideas to the demands of a given site, mediating the creative intervention with originality and sensitivity.”2

Indeed, materiality is explored and celebrated in Borgelt’s work, where the inherent character of a substance informs the nature of the work and the working methods that evolve. She admires the sculptural work of Anish Kapoor – his vision, and the manner in which he engages with materials and scale. Kapoor, like Borgelt, readily chooses to work creatively with suppliers and designers for whom the visionary aspirations of the artist are new and challenging.

Wax was particularly important in the transition from two- to three-dimensional work “I love wax for its aliveness, its ‘waxiness’. Its desire to be polished, its transparency.”3 Borgelt also uses dry pigments to great effect. Nancy Sever, Director of Drill Hall Gallery observes: “Marion Borgelt’s work appeals to the senses at several levels. At the tactile level, she displays a refined mastery of the materials with which she works. Using an eclectic range of materials, both organic (beeswax, wood, felt, stone) and inorganic (glass, fibreglass, stainless steel), she has compiled a vocabulary of symbols and motifs that communicate meaning and her interpretation of the nexus between culture and nature, a connection she has long explored in her work. At the visual level, meaning is conveyed through recurring abstract patterns such as the sphere and the spiral. The result is an assured handling of tension and movement, lightness and darkness and especially colour. She has an innate understanding of the emotive and psychological power of colour, restricting herself to one primary or secondary colour in each work as she attempts to evoke a feeling of a life force.”4

Marion Borgelt grew up near Nhill, in the Wimmera district of Victoria. The Wimmera landscape so apparently replete of life, was interpreted by Sidney Nolan in the 1940s when he was posted there in the army; his images soon became inexplicably linked to avant-garde art practice, as much as his personal response to place. They also became icons of modernism in Australia. The Wimmera is also a vital source for artist Philip Hunter (b.1958) who grew up in Donald, a small town there; in his work he challenges meaning in art, and the experience of landscape as image and poetic form. Marion Borgelt attributes her initial interest in the cyclical nature of the land, to her early experience of the Wimmera landscape. She explains how her early childhood experiences in rural Australia remain integral to her art practice, yet she does not want to create a narrative. As for the landscape itself, she “was always both impressed and haunted by the vast flat open space of the Wimmera. In summer it felt like we lived under the sun. It was hot and dusty, wheat fields shimmering as far as the eye could see. It is a place where the earth meets the sky with nothing much in between. There were, of course, the wonderful vernacular structures of the wheat silos, which dotted the horizon. I called them ‘The Cathedrals of the Wimmera’. When I was about seventeen, I was desperate to leave.”5

Her fascination with the cycles in nature, particularly the moon, has prompted a number of important works. The moon’s moods and changes evident through its perfect form, reflected light and tidal pull has been alluded to by Borgelt, through a range of materials from polyurethane, highly polished stainless steel, granite, marble, glass, polished wood and most recently duck eggshells.

Working in materials such as glass has required a collaborative relationship with expert glass masters. In the series, Venetian Tsukimi (2007) for example, the artist considered the collaborative work of value for it, “opened the door to exploring further the medium of glass … not an easy process because of the exceptional craftsmanship of Murano’s Berengo Glass Studio [on the Venetian island of Murano].”6 Comparing her collaborative projects to her solitary studio practice Marion Borgelt explains: “I love both very, very much. The large works where I’m heading a team don’t feel so emotional and personal but they give me a thrill when so many outsourced components come together in the final installation and the work materialises just as I imagined it. Painting is more of a prayer. It’s about you with the medium, teasing the medium to do as you wish, hoping it shows you some magic you didn’t know was there. It makes you far more vulnerable.”7 Recalling an Agnes Martin exhibition at the Whitney Museum of American Art in 2000 she observes: “There was a suite in the softest pinks and greys and lead pencil – it was mesmerising. Something that slows you down in a moment that has a deep poetic resonance.”8

Her Strobe paintings, included in Mind and Matter are “abstract works referencing waves of bending, twisting light whose shrill bands of colour shocked viewers on their initial showing in 2007.”9 The Strobe Series (2007-2009) paintings give the impression “that they have been airbrushed or spray painted but actually Borgelt is displaying her considerable painting skill, gently blending colours with wide brushes creating an optical illusion. They are displaying a recurrence of the painting techniques of the Bloodlight series. The surface pulses with an energy suggestive of surging tidal currents, heart beats, veins throbbing, electric pulses”.10 Glenis Israel explains methods employed in the Liquid Light Series (2004–2009).

These works involve animated surfaces created by precisely cut, twisted and pinned strips of canvas in sequences and intervals that reveal an underlay of another colour. Because the “twist” creates a sculptural relief effect, the amount of underlying colour shown varies as you move, the surface taking on its own mesmerising rhythmic pulse. A rippling energy is suggested below the surface, alluding to an inner world. We search for an underlying order or logic within its complexity similar to scientific investigations into the natural world; such as the ebb and flow of tides, the measurement of time and chaos theory. They speak of change and transformation, the forms fluid yet mathematically exact. The elliptical shape can be interpreted on various levels, appearing more scientific than her earlier natural work referencing cocoons, but still having associations with an eye, the sun or moon. They also speak of more abstract or universal symbols such as orbs, spheres or voids. We see here a subtle shift from natural concerns to more universal and scientific notions. The sense of tension and subtle movement is suggestive that our life is in a constant state of flux, yet the effect is surprisingly calming of the soul. They are intellectual visual puzzles.11

Marion Borgelt explains the works to Laura Murray-Cree: “The colour reflects a new way of bringing life into my work, getting it to radiate and become active on an optical level. It’s bittersweet … I like to hit that point at the edge of bad taste and still get it to work. I also like the nuances, the soft vibrancy as well as the stridency. They affect your periphery, the energy in the room. It’s like Brian Eno music pulsing out at you – a bit unsettling. I work with extremes and contrasts … from delicacy to power and strength, from highly refined things to things that lift the lid on the emotions – the extremes of visual and psychological experience … Abstract painting has greater difficulties on certain levels than figurative painting. The elements are reduced and you have to get them right. In my case, the bands of colour, the edges, the movement, the shifts and changes and the texture all have to be right. Some bands are translucent, some are solid, some shift in a fugitive way, some in a sharp way. I don’t have the patience for making narratives because I want to get to a deeper, emotional place – maybe hitting an instinct or a chord inside the viewer as it hits me.”12 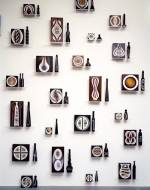 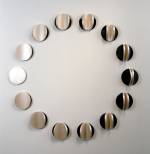 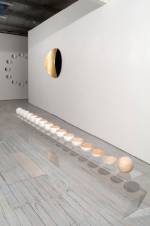