The eight new works here began as a project about a fictional village and its response to tragedy, but shifted as Berrío explored her feelings and emotions regarding the real catastrophe of the current global pandemic

Victoria Miro, London
6 October – 27 November 2020
Due to new Covid-19 guidelines the gallery will remain temporarily closed until further notice. The exhibition is available to view via the App Store on Vortic Collect until 18 December 2020

The Columbian-born artist María Berrío (b1982), who is now based in Brooklyn, New York City, creates large-scale works made from multiple layers of Japanese paper. Her work explores cultural crossings and migration in a global arena, as observed through the lens of her cultural history. The worlds she creates are occupied primarily by women and girls, painstakingly presented in Berrío’s signature style. Torn paper, female figures and the natural world dominate images that quietly tell their stories of the courage and strength of women the world over, the kind of women that the artist herself aspires to be. That courage is not only found in the more obvious places. As Berrío says: “The female soldier fighting on the front lines is of interest, but so, too, is the mother who finds a way to feed her children and sing them to sleep amid bombing campaigns and in the ruins of cities. To truly ennoble womanhood, we must discover and appreciate the beauty in every action, big or small.” It is her idea of “beauty in every action” that is sustained in images that, although idealised in some respects, reveal a politics deeply concerned with the fate of families, especially in migration and under traumatic conditions such as the Trump administration’s family separation policy. 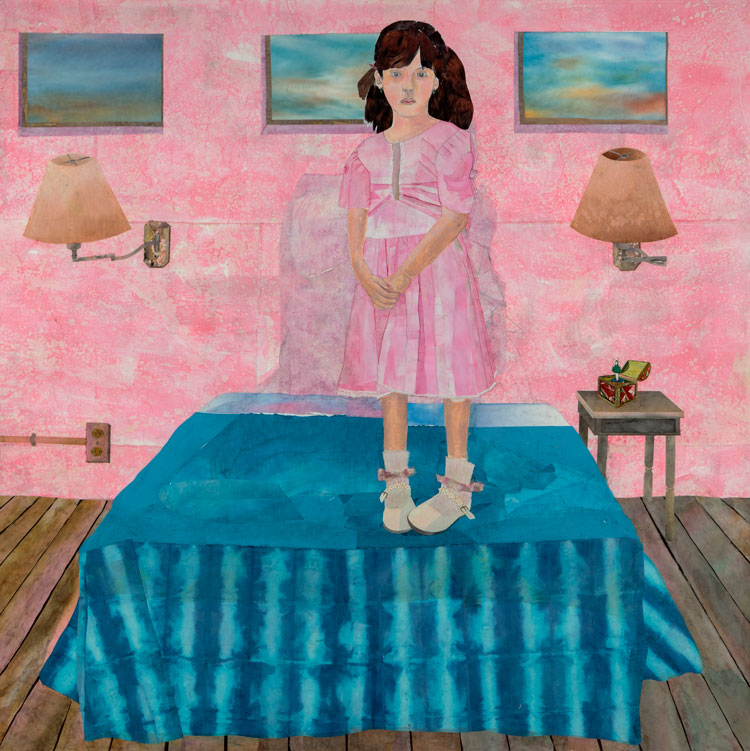 Berrío began drawing as a child, a constant occupation that, she says, “was like a relief, meditative”. Her artistic training at Parsons School of Design and the New York School of Visual Arts, from which she graduated in 2004 and 2007 respectively, was mostly in charcoal and paint. It was not until 2010, when she discovered Japanese print paper, that Berrío felt able to truly express herself. She uses small strips and slivers of the watercolour-washed Japanese paper like paint. Her attention to texture, surface and space means that the tiny slivers come together to create rich and varied worlds on canvases that are sometimes more than two metres high and much larger than human scale. These huge pictures do not threaten to engulf us as large-scale images often do, but instead seem to invite us in to Berrío’s somewhat surreal worlds. That feeling of invitation certainly has something to do with the depiction of a harmonious interaction between human and natural worlds, but it also has something to do with Berrío’s medium and the materiality of collage. There is myth, memory and biography here. These are serene dreamscapes, but with a hidden edge, a veiled message of strength and hope in the women they portray.

The eight works in this exhibition were all made in 2020. In combinations of the Japanese paper, watercolour paint and coloured pencils of Berrío’s signature style, they reference the histories of Colombian fishing villages, ravaged by political and environmental catastrophe, but with communities full of strength and hope. Berrío draws on these histories and imagines her own fictitious village, exploring, in her words, “the silence that follows as catastrophe, the modes of resilience and adaptation that arise and evolve out of the crashing devastation of loss”. Although the project began with a fictional village and its response to tragedy, Berrío’s ideas soon developed, shifting to explore her own feelings and emotions regarding the global catastrophe of the coronavirus pandemic. 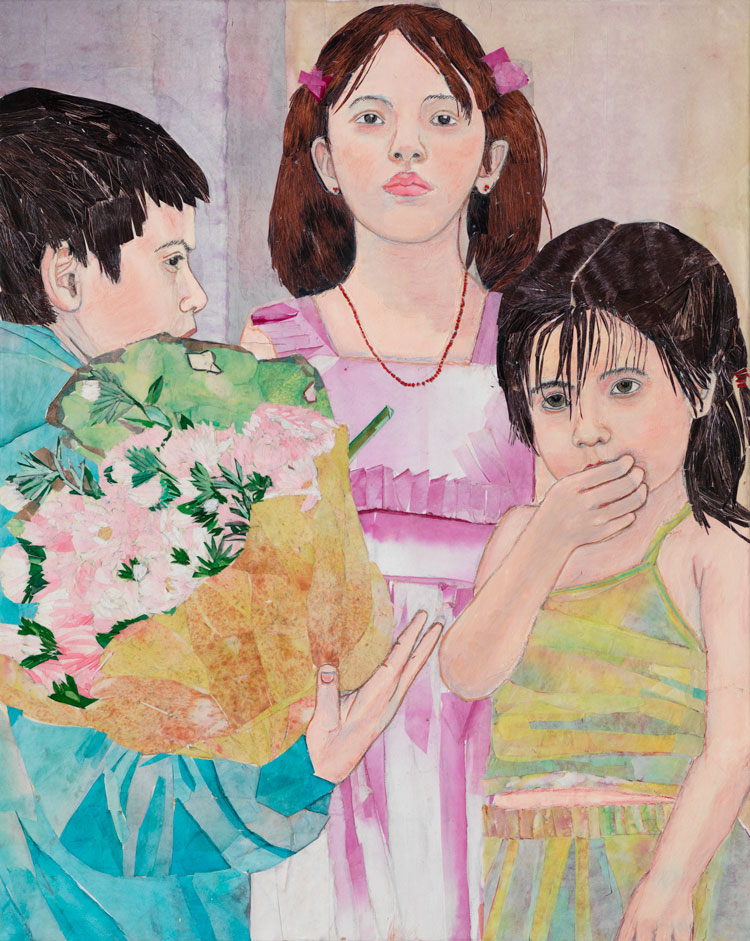 The entrance to the gallery is framed by two small works, one on either side of the opening – The Combed Thunderclap and Under a Cold Sun. Both are tightly focused on children, cropped like zoomed-in photographs, slightly claustrophobic as parts of figures are cut off beyond view and there is little sense of the extended space around them. The three children in Under a Cold Sun, Berrío tells us, are the personification of resilience, young in age but made old beyond their years by the burdens they bear. The Combed Thunderclap takes its title from Jorge Luis Borges’ 1941 short story The Library of Babel. It shows a young girl absorbed in her own world, an unpredictable tangle of limbs and nerves that might take off at any moment. In both images, the children appear lost in thought, in an interior world that we can only imagine.

In the next three works, Clouded Infinity, Crowned Solitudes and Ananda Tandava, there is a glimpse of the world outside. Clouded Infinity shows a pregnant woman clasping her belly. That the cycles of life continue in the face of adversity is cause for hope. The delicate detail of crimson painted toenails and criss-cross sandals seems to underline that message. In Crowned Solitudes, two young women seem to wait for something unknown, one in anguish and one in defiance, but they wait together and there is strength in that togetherness. In this and the previous work, the wider world is visible through the windows behind the figures. In Ananda Tandava, a young girl stands alone in her bedroom, a sanctuary and, we are told, a stage. The story here is that through the rhythms of the Hindu god Shiva, she dances the heavens into existence, wide open spaces seen in the paintings behind her.

In the remaining three works in the exhibition, Miracles of Ordinary Light, The Quiet Undoing and There is No Sky for Ground Spirits, the scenes are entirely outdoors. In the last of the three works, a woman tends to birds in coops. The present and the past are here in the form of a bird in her hand and another bird behind her. All except one of the coops is empty and the future is uncertain. Here, Berrío makes direct reference to the violence and massacre experienced in some Colombian villages. The Quiet Undoing is a pause, the artist tells us, as Berrío herself tries to adopt the kind of resilient stance taken by the figures she presents in her work. In Miracles of Ordinary Light, there is no figure and nature itself is enough.

Throughout the length of the gallery space at Victoria Miro, there is another narrative at play, too, in the manner in which the works have been hung in relation to one another. That narrative is one of hope and takes us from works that are entirely interior scenes to others that allow us to glimpse the world outside and, finally, outdoor scenes. This shift from interior to exterior suggests increasing degrees of freedom from our domestic interiors, but also from our own thoughts, and a move into the wider word and the possibilities that offers us. By the same token, the trajectory from interior and exterior space might also be considered as a move away from home and the migratory narratives that are often at play in Berrío’s work. Home is a refuge in these works, but a refuge that enables us to grow stronger and more spirited, filled with hope for the future and able to make positive contributions to world around us. 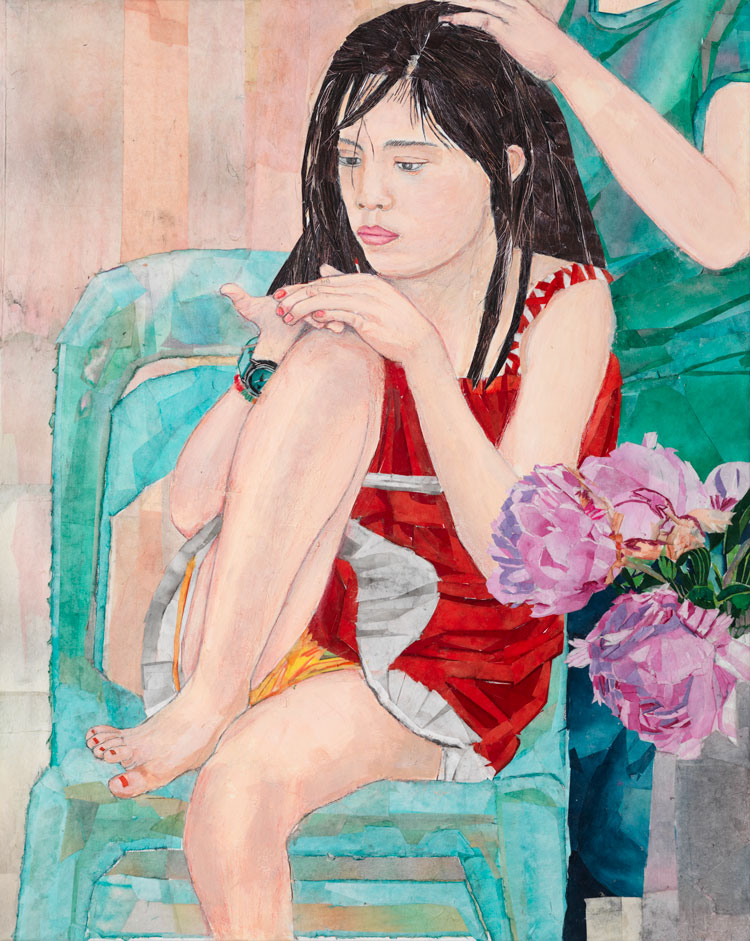