In an exhibition dominated by self-portraits and seascapes, Celia Paul demonstrates the virtues of subtlety and perseverance

Three self-portraits, a painting of her sister, a depiction of a room, and a seascape sequence: these are the components that combine to form the English painter Celia Paul’s Desdemona for Hilton by Celia at the Victoria Miro Mayfair. As modest as that may read, together they weave a quiet magic. Give Paul’s work time, and it can even thrill.

The exhibition follows Desdemona for Celia by Hilton at the Gallery Met, New York. A collaboration between Paul and the writer Hilton Als, organised in tandem with a production of Verdi’s Otello by the Metropolitan Opera, the New York exhibition used Paul’s work to explore the tragic figure of Desdemona, the protagonist’s doomed, isolated wife. Now, Victoria Miro has published a book of the same name, juxtaposing Paul’s paintings with texts from the artist and Als; the London exhibition, name inverted to betoken the friendship between the two figures, coincides with the book’s release.

As compelling as Shakespearean revisitings can be, however, the work displayed here is abundantly rich when taken on its own terms. A trio of self-portraits depicts Paul sitting in the same position, always wearing the same smock. Named after the month in which they were painted, they make a virtue out of small differences. Her face, understated and gnomic, rests as if deep in thought; her eyes gaze into something beyond the physical. Her garment, covered in shreds of paint, masterfully visualises the effects of light on colour. Although the delicately painted Paul almost appears to dissolve behind these clothes, the self-scrutiny is acute.

When you place a sequence of self-portraits together, you inevitably invite discussion of mortality. While a portrait of another subject captures them on an isolated occasion, the self-portrait captures the artist at a time that, for them, keeps on running after the painting is finished. Each piece is another step towards the last. Paul began painting self-portraits once her mother became too old to sit; now that she has died, her spectre echoes through Paul’s paintings, creating an inexorable circularity. Yet while time’s passing is certainly a motif here, there is also something else, something harder to grasp. Paul’s self-portraits make you want to gaze until you uncover their secret. It doesn’t matter that the secret is so inscrutable as to be unknowable; the joy is the search, and in the knowledge that there is something else present.

If the exhibition’s sole portrait of Paul’s sister Kate (Kate in White, Early Summer, 2015) feels less penetrating, it manages to be equally transfixing in its play of light, shadow and depth. Such subtle mastery also informs the tiny Room Opposite the British Museum (2016), in which Paul’s Bloomsbury studio is graced with a breezy swath of light that evokes a sort of celestial visitation. There is undeniably something of the numinous about Paul’s work.

A part of this can be traced to her early life, which reads like the plot from a mid-century novel. Born in 1959 in Trivandrum (now Thiruvananthapuram), capital of the state of Kerala in southern India, Paul was the child of Christian missionaries. After being sent away to boarding school at the age of four, she reacted against the separation from her parents by refusing to eat. Soon after, she was diagnosed with leukaemia. To seek a cure, the family returned to England, where Paul recovered in a few months, an about-turn her parents saw as the work of God. Until his death in 1983, her father worked as the warden of the ecumenical Lee Abbey in north Devon and then became the Bishop of Bradford; her sister Jane is a theologian, married to Rowan Williams, former Archbishop of Canterbury. When her mother sat for a portrait, she would use the opportunity to pray. Although personally irreligious, Paul has been surrounded by the religious for much of her life.

An influence of a different stripe can be found in Lucian Freud, who met Paul while serving as a visiting tutor at Slade. His interest piqued by Paul’s early paintings of her mother, he served as her mentor, and from 1978 to 1988 they were lovers. During this period, she became the subject of some of Freud’s most strikingly honest works – the paint-spattered, downward glancing young woman with demureness worthy of the Dutch Golden Age, for instance, to his warts-and-all nakedness in Painter and Model (1986-7). Although Paul’s sense of transcendence contrasts with the mature Freud’s terrestrial fleshliness, she shares with him a genius for impasto and colour, as well as a palette centred around ash, ochre and umber. She has taken to extremes Freud’s habit of painting mainly friends and confidants, largely restricting herself to her mother and sisters.

Paul began to paint her seascapes after her mother died last year, and they emanate absence. Located in the Devon of her childhood, there is a circularity here, too – the main subject of her teenage paintings was the natural landscape around Exmoor.  These present works are almost another type of portrait, where the sea becomes a slippery sitter unable quite to be captured. It is tempting to contrast them with those of another British artist who had a middle-aged turn towards the sea, Maggi Hambling. But whereas Hambling’s North Sea paintings, the subject of a National Gallery exhibition in 2014, depict waves as moments of coagulation, motion paused and ready for its close up, Paul’s Triptych: Wave Approaching, Wave Breaking, Wave Receding(2016) places its subject as an ever-shifting process, a vision of transience. The horizontal brushstrokes are so fleeting that they almost appear to move.

As with the self-portraits, there is the sense here that what we see is only a layer of the whole. Everything is laid out and yet there is more to express. It makes Desdemona for Hilton by Celiarichly beguiling on a level that few contemporary painters manage. Anxious about her prospects in the YBA-dominated early-90s, Paul sacrificed sociability to perfect her craft. Now, almost 40 years into her career, such patient devotion has borne exquisite fruit. 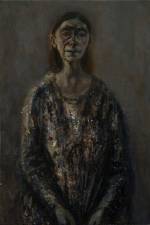 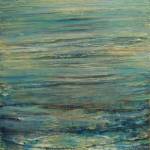