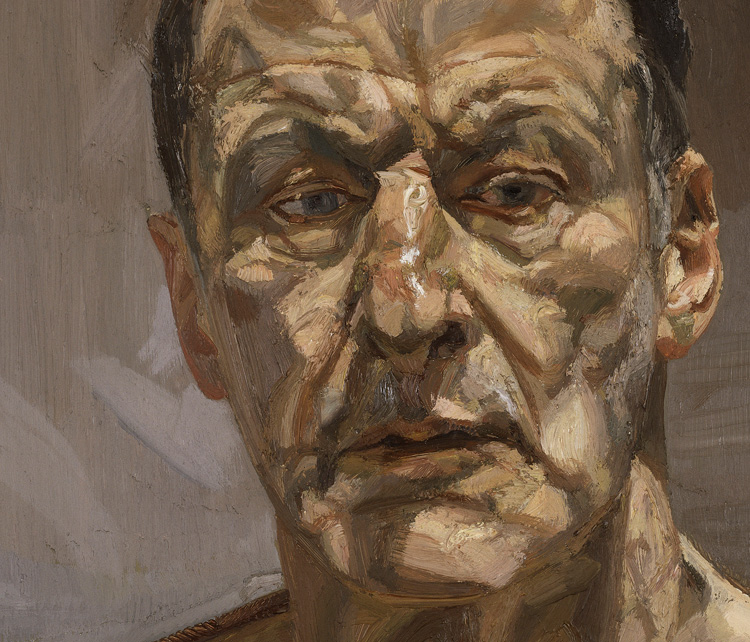 Lucian Freud (1922-2011) is well known for his paintings of the human figure and particularly the nude. Like many artists, he also engaged in self-portraiture, although he was unusual in his repeated return to the genre throughout his long career. The 56 works in this exhibition at the Royal Academy range from the linear and graphic works of his youth to the increasingly painterly forms of his middle years and old age. The self-portraits are intense, intimate and visceral and act to chart his artistic development more broadly. While they are all recognisable as Freud, his approach to self-portraiture and painting from life more generally certainly shifted throughout his career. As an artist, Freud was always looking to extend his exploration of painting as a method of capturing not only the likeness or appearance of himself and his sitters, but also a sense of their emotional and psychological makeup.

As someone who greatly valued his privacy, there is a curious dilemma at the heart of Freud’s self-portraits and they are not straightforward. There is a degree of fugitiveness as he appears in mirrored reflection, in fragments of unfinished works or glimpsed in the margins of paintings of other sitters. Even where his image is central to a work, his gaze often avoids ours, looking down or staring into the distance as if he has been caught deep in contemplation. His ongoing struggles with self-portraiture become clearer when we learn the difficulties he faced in in creating them: “I don’t accept the information that I get when I look at myself and that’s where the trouble starts,” he once said. Still, his feeling was that as he subjected his sitters to a prolonged process lasting weeks or months, he should undergo the same process. 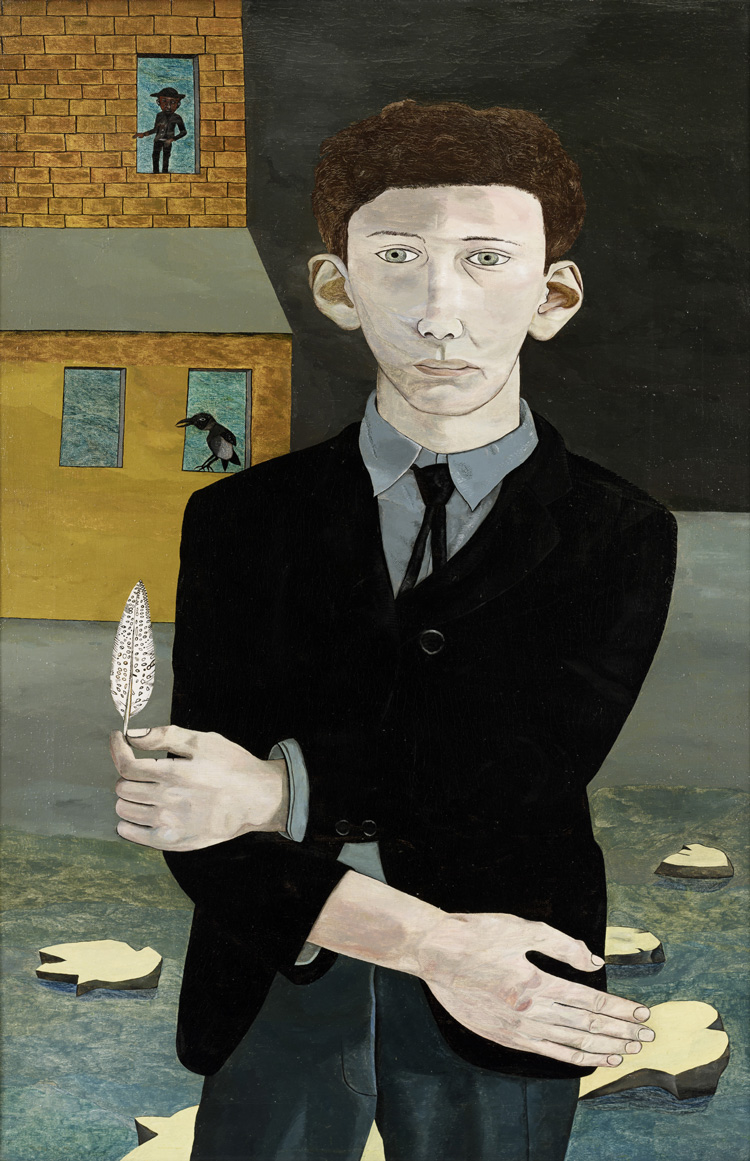 Drawing began as a childhood obsession for Freud, who was included in an exhibition of children’s drawings at the Guggenheim Jeune gallery in London in 1938. It continued to be central to his practice until the 50s and informed his approach to painting at that time. The linear and graphic qualities of his early work can be seen in his self-portraits Man with a Feather (1943) and Startled Man: Self-portrait (1948). The former is his first major self-portrait and was exhibited in his first solo exhibition, at the Lefevre Gallery, London, in 1944.  His use of line and fine brushwork reveals his interest in northern European Renaissance painting. Startled Man is well named and the intensity of the image is astonishing to behold. It demonstrates Freud’s facility as a draughtsman as well as his ability to capture and convey emotion. This highly charged self-portrait with Freud open-mouthed and eyes full of surprise has its art historical forebears in self-portraits by Rembrandt and Courbet. 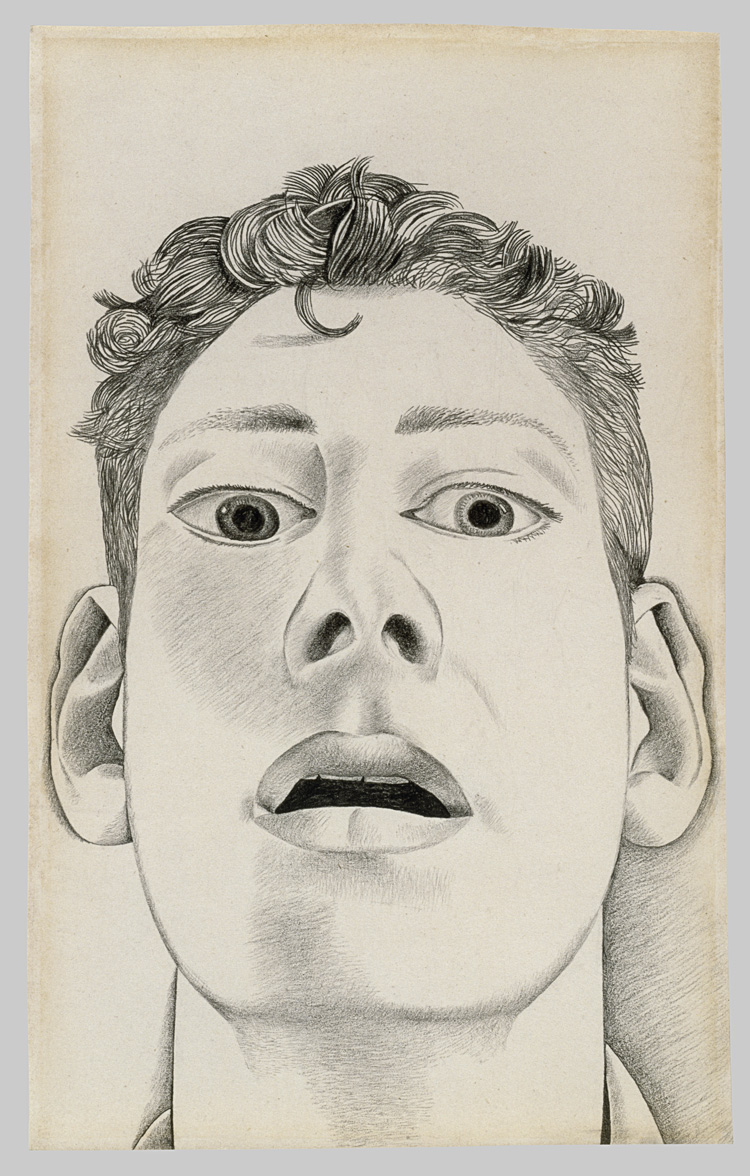 When Freud turned his focus from drawing to painting in the mid-50s, he also changed his painting position. Up until then he had painted while sitting down. His last painting made in this position was Hotel Bedroom (1954). Now painting standing up at an easel, he felt freed up from the restrictions of sitting. He also looked to his fellow figurative painters Frank Auerbach and Francis Bacon and began to adopt a much looser painterly style. In Man’s Head (Self-portrait III) (1963), Freud represents his facial features as blurred and abstracted rather than linear and precise. 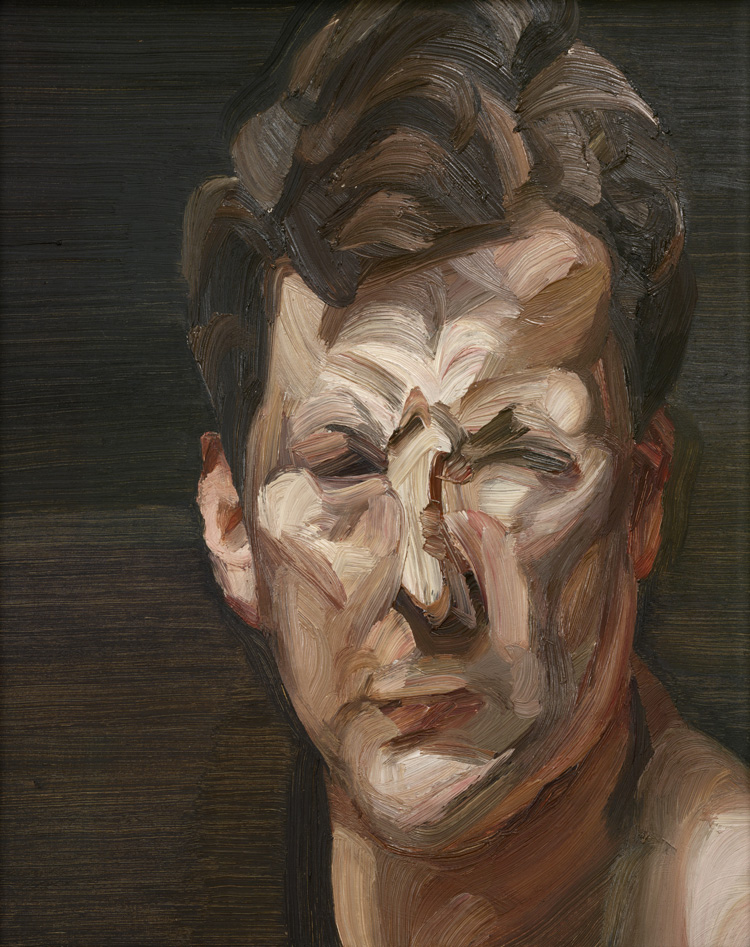 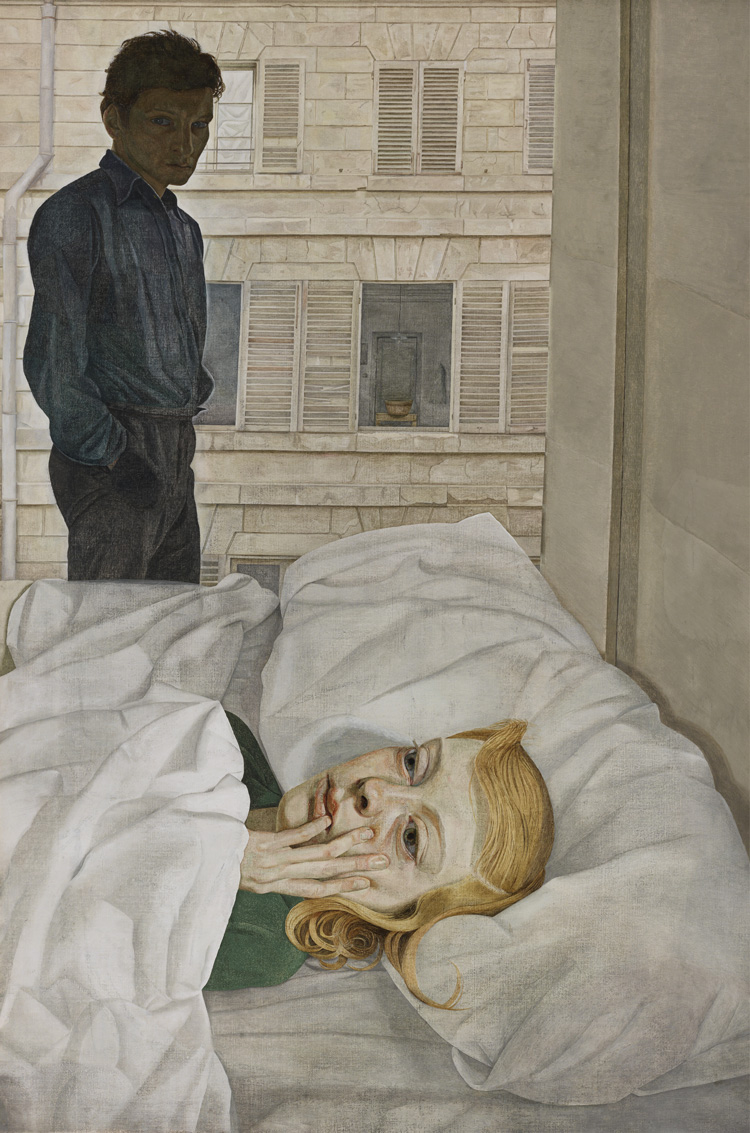 For Freud, mirrors were important in creating self-portraits. The use of mirrors enabled him to paint himself at one remove, with a level of detachment, and to view himself at unusual angles. This strategy also underlined the illusive nature of self-portraits. Reflection with Two Children (Self-portrait) (1965) was the first self-portrait in which he highlighted the use of a mirror by including its frame in the painting and referencing its reflective qualities in the title. 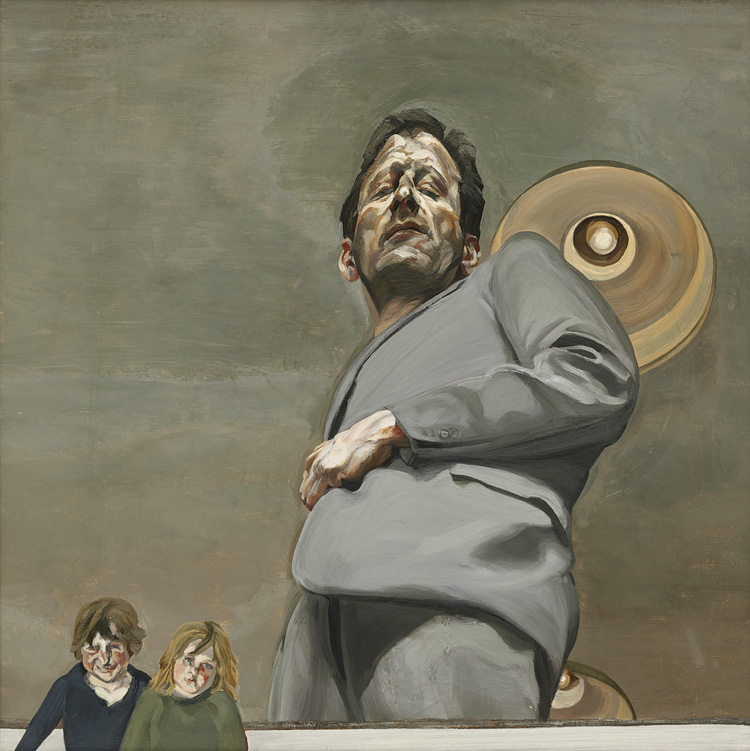 Studio surroundings were important to Freud, who worked out of a number of London studios throughout his career and each provided a comfortable environment in which to encounter his sitters. As he explained: “My work is purely autobiographical. It’s about myself and my surroundings … I work from the people that interest me and that I care about and think about in rooms that I live in and know.” His focus then was on a physical painterly presence. In some portraits, Freud painstakingly paints his sitter, but slips himself quietly into the image in the margins. Often, we see evidence of the studio setting, too, as an environment in which the artist-sitter relationship develops over time. In a nude portrait of his son, Freddy Standing (2000-01), Freud shows himself reflected in the window, while in Flora with Blue Toenails (2000-01), he is present only in the shadow his head makes over her.

Freud’s international reputation continued to grow. From the early 90s, he held major exhibitions almost every year until his death. He continued to paint self-portraits, sometimes showing himself at work as an artist. As his body became older and increasingly frail, his self-portraits became more and more layered and painterly, with a thick impasto finish. This sort of finish is especially evident in his nude self-portraits, especially on his neck and genitals, first undertaken at the age of 70. His particular application of Cremnitz White is important, too, in modulating and shaping the contours of his face as we can see in Reflection (Self-portrait) (1985).

Freud’s self-portraits, as this exhibition shows, were a vehicle for self-reflection. His developing techniques in drawing, painting and etching, as well as his growing relationships with his sitters, his studio surroundings and himself, are exposed in the most intimate of fashions in these works. From the bold linear and graphic self-portraits of his youth to the painterly self-portraits of his middle years and old age, Freud’s focus never wavered from the predicament at the heart of what he did – how to achieve what he called “biological truth-telling” while exposing the deceptive quality of all self-portraits. 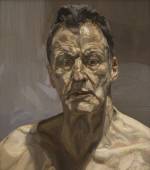 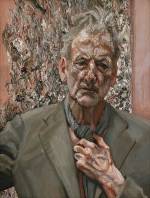