I sometimes leave exhibitions with a sense of anti-climax: expectations are often unfulfilled or disappointed. One might even feel a diminished assessment of the artist. Against that background of experience, I can only say that the current exhibition of Lucian Freud at the National Portrait Gallery is quite awesome and unmissable. The importance of the exhibition lies not only in the impressive account it provides of Freud’s life and work, but the as yet unrealised impact it might have upon British art, and world art in general.

Over the last couple of decades, critics have adopted an increasingly benign attitude to Freud, even acclaiming him as “Britain’s (the world’s) greatest painter”. This wave of critical approval is a mounting but relatively recent phenomenon. The fact is that Freud spent most of his career on the margins of the mainstream of recognition and art discourse. We have short memories. For example, he was not regarded as sufficiently significant to be included in the list of 50 exhibitors in Recent British Painting held at the Tate Gallery in 1967, although the Tate already owned his work. He was not among the select 122 included in the comprehensive British Painting ’74, staged by the Arts Council in 1974. Similarly, he was omitted from the massive review of English art, Arte Inglese Oggi, held in Milan in 1976. 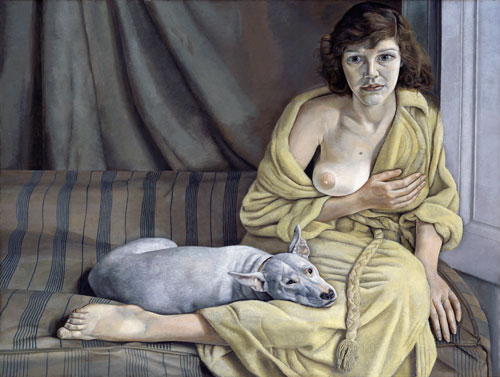 As recently as 1983 he did not justify an entry in Macmillan’s hefty Biographical Dictionary of Artists, even though its General Editor, Lawrence Gowing, had published a monograph on Freud in the previous year. (To be fair, his name does appear once in the Dictionary – as a footnote to Stanley Spencer!) Freud was granted occasional tokens of recognition from the art world. He won a prize from the Arts Council in 1951. He also represented Britain at the Venice Biennale in 1954, together with Bacon and Ben Nicholson. Perhaps he was seen as providing a calming antidote to the uncompromising abstraction of Nicholson and the expressionist contortions of Bacon. Nevertheless, the fact remains that the critical position of Freud throughout most of his working life bore no relation to the status which he now enjoys. Needless to say, many of the artists who were flagged as significant or promising over that period have disappeared without trace or diminished to yesterday’s men and women.

To what can we attribute this long period of neglect followed by an amazing volte face in critical evaluation? I believe it can be traced to one simple proposition: that Freud’s sole objective as an artist was to see and record what was before him. He embarked upon his life’s mission at a time when to do so was regarded as mistaken, perverse or even lunatic. Teaching in a college of art in the mid-sixties, I learned that the one remaining student who wanted to paint from the life model had been quarantined in an annexe remote from the main college as if he had a communicable disease and was in danger of infecting other students. The dominant ideology of the mid-20th century included the principle that all the avenues of representational image-making were totally exhausted. Some artists, like Pasmore, published a personal manifesto explaining their position, and that there was no turning back. Figurative art could only be legitimated if it embraced an additional element, such as ironic reference to the world of Pop or profound public rumination as to the meaning of life, art and everything else. 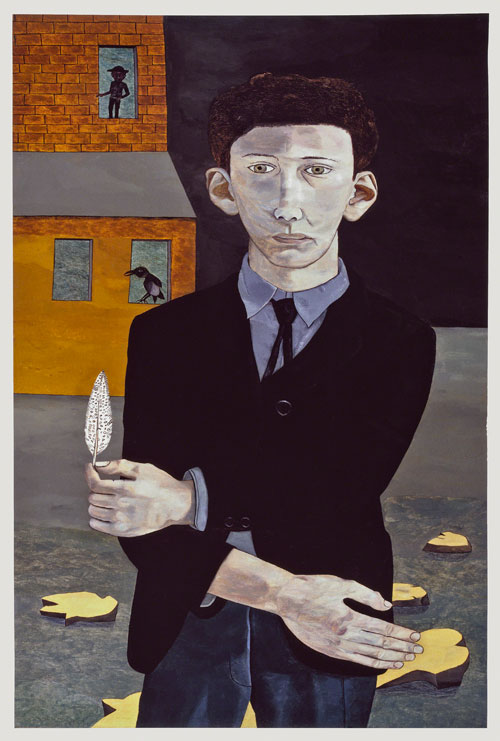 Alas, Freud was notoriously low on public rumination. In fact, apart from a favoured minority, getting any information out of him at all was like pulling teeth. The reviews of the present exhibition demonstrate a continuing probing public curiosity about his origins and his private life. His attitude was, quite admirably, that he was a painter, and if there was anything of interest or value it was in his paintings and not in speculation about his private life. (I am reminded of the equally taciturn painter Balthus, who after being persistently pestered by an eager journalist finally issued the edifying statement: “Balthus is a painter about whom little is known”.)

Freud’s development as a painter can be divided into three broad phases. His juvenilia and early work, up until the early 1950s, reveal a brief flirtation with Surrealist motifs, such as the presence of enigmatic emblems like a flower, a bird or an animal. Subjects are rendered in a tight, linear manner, with clearly defined boundaries to forms. Colour and texture are cool and restrained, creating a stylistic ensemble reminiscent of the Flemish primitives. There is a heraldic quality to much of this early work, combined with a certain naïf style of drawing which often emphasises the eyes over other features. 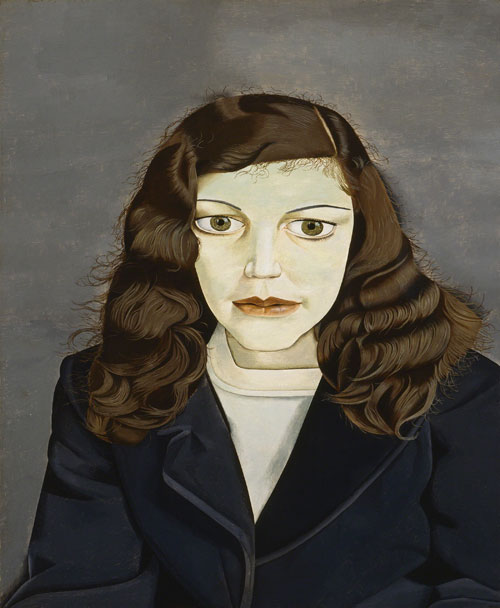 During the 1950s he perfected his command over the representation of form, permitting him to concentrate increasingly on a penetrating account of the sitter’s physique and psychology. This led to the second phase in his artistic development, and it was accompanied by a more adventurous use of colour and brushwork. The transition reflects the polarities set out by Heinrich Wölfflin in his classic Principles of Art History (1915): from linear to painterly, from plane to recession, from closed form to open form. There were two procedural principles which facilitated this transformation in Freud’s work. The first was the abandonment of sable brushes for the more gritty hog hair. This meant that the suave, even surface textures of his early work were replaced by a sense of facture, in which every brush stroke was clearly visible and celebrated. The second was the decision to work standing rather than sitting. The method allowed him to move about and gather or clarify information which could not be captured from one fixed position.

This culminated in his monumental mature style, characterised by a masterly command of colour, tone, texture and form. He delighted in the complete spectrum of human physiology, from the emaciated to the obese, with all variations in between. One of his favourite models, captured in Benefits Supervisor Sleeping (1995) is like a modern reincarnation of the Venus of Willendorf. He lovingly records the pendulous mass of breasts and belly as they pull down and sideways in luxuriant folds. Other models verge on the anorexic. A common feature is the way in which flesh is stretched upon a skeletal structure.

Freud’s subjects are naked rather than nude, in the sense defined by Kenneth Clark. There is no attempt to tidy up or improve upon whatever nature offered him. In fact, he delights in recording evidence that these are people who normally wear clothes, such as the strange pallor of flesh which is never exposed to the sun, contrasted with face, hands and legs, which sometimes are. He lovingly captures small peculiarities, such as a mole or a lentigo, tracking them through different paintings of the same model. His titles, such as Naked Solicitor (2003) (a painting which is surely an hommage to Sickert) repeatedly anchor the model to life outside and beyond the studio: these are people who have taken their clothes off, and will put them on again when they go home or back to work.

In terms of technique, Freud used nothing that was not available to Frans Hals, or even earlier to Titian: stretched canvas, paint and a medium. One can detect stylistic references to the painters he admired, including Ingres, Rembrandt, Hals. Chardin and Titian, but these are blended into a completely unique result totally remote from pastiche or revivalism. It will take a long time for our cultural mindset to come to terms with such a legacy.

As I joined the crowd spilling out on to the pavement, I asked myself why it is important for someone to continue to remind us to look closely at nature and attempt to record it. Part of the answer was immediately apparent all around me. A high proportion of people live permanently in a kind of cyber-space, the virtual reality of cell phones, the computer and the internet. Many passers-by were talking on mobile phones, navigating the crowds in zombie-like distraction, with glazed eyes and meandering steps, hardly aware of their material environment. Others simply stood frowning at their phone, perhaps trying to make sense of a new app. An increasing number of people now spend their whole working and social life communing with a machine, which gives them the principal access they have to colleagues, associates and even family and friends. Television, computers, email, cell phones, twitter, blogs, play stations, create an electronic interface between ourselves as sentient beings and the world.

For Freud, the studio was a kind of laboratory of vision, a place in which every day he asked himself: “How does this appear? How can I capture that appearance?” His paintings record and celebrate the delight and the mysteries of the world of appearances. They inspire us to look at people, faces, gestures, in a new light, reviving the neglected or jaded organs of perception. He showed no interest in personal fame or reputation, let alone money. At a time in his life when he could have relaxed and bathed in public recognition and acclaim and enjoyed his wealth, he chose the daily – and nightly – grind of the studio. I can think of no more important example for our age. 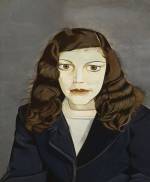 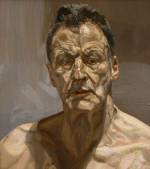