“Mind your lessons, little kinsman”, was the advice the eight-year-old Giorgio Vasari received from Luca Signorelli in his old age. Vasari later rewarded Signorelli’s guidance by describing him as “the man who with his profound mastery of design, particularly in nudes and with his grace in invention and in the composition of scenes, opened to the majority of craftsmen the way to the final perfection of Art”. Praise indeed from the Florentine, which can be extended to the curatorial team of the tripartite exhibition dedicated to Signorelli at the Galleria Nazionale dell’ Umbria in Perugia, the Museo dell’Opera del Duomo in Orvieto and the Pinacoteca comunale in Città di Castello.

Accompanied by Giorgio Vasari’s little wisdoms written across the walls above Signorelli’s masterpieces, the visitor is invited to admire some 100 works, 66 by the hand of the Cortonese Luca, in the grand Sala Podiani of the 13th-century Palazzo dei Priori which also houses the permanent collection of the National Gallery. The vast space of this room adorned with a coffered ceiling and mural paintings throughout, is divided into several themed areas, which illustrate Signorelli’s entire career.

One extra dimension the organisers of the exhibition had in mind and are keen to emphasise was to make it a “green” venture. The use of solar energy, LED lights and sustainable recycled materials make this exhibition technologically innovative. The use throughout of iPad’s and Android applications for the conveying of knowledge not only on the Perugian exhibition but also on Umbria’s patrimony, museum education, information for journalists and scholars and a virtual tour of the other exhibition sites Orvieto and Città di Castello, ensure that visitors have a pleasantly informed and straightforward visit. The use of new technology attracts the visitor to this space and accentuates Umbria’s bid to remain an important player on the Italian cultural scene in the future. Further, the impressive catalogue of the exhibition effectively reinvents Luca Signorelli, an artist who, beyond the scholarly community, remains comparatively little known.

The exhibition opens with a challenge that is over half a century old. In 1953 during a solo show of Signorelli’s work, it was regretted that the Boston, Oxford and Venice Madonna were not put on display. In doing so the curators effectively ignored Bernard Berenson’s remarks that Signorelli’s Madonnas have distinct shared characteristics with Piero della Francesca’s virgins. The 1953 lacuna is here addressed by the display of all the missing paintings including the Madonna di Senigallia by della Francesca and the Madonna and Child most probably by Luca Signorelli. The influence Piero della Francesca had on the young Signorelli is unmistakable in this latter piece. The soft tones of the background in which the narrative is set, the pale fleshy tone of the Madonna, her downcast eyes and thin lips that hide a hint of emotion are similar in both works. The rich garments in which both virgins are covered, especially the detail on the tightening of the sleeves, make a comparison worthwhile. In some areas such as the delicately painted veil on the Virgins head, Signorelli seems to overtake della Francesca, whereas the latter excels in his depiction of Flemish inspired interior elements such as the door behind the angel who meets the spectators gaze or the randomly placed wooden box on the shelves behind the angel dressed in pink.

In the Orbit of Verrocchio displays work by Signorelli’s contemporaries who had an influence on the painter. Especially the encounters he had with Andrea del Verrocchio and Bartolomeo della Gatta can be observed in Signorelli’s depiction of nudes such as in a panel of the Pala Bichi depicting a Woman with Child and Virile Man. Fuelled by his interest in anatomy and antique sculpture, the depiction of elegant yet proportionally truthful nudes remains a leitmotiv throughout his career. The linear tensions in the representations of the nudes can here be observed clearly in Verrocchio’s San Girolamo and della Gatta’s Francis receiving the Stigmata.

In the 1480s Signorelli was commissioned to work in the Sistine Chapel under Perugino and a number of other Florentine and Umbrian artists. The curators have decided to display this part of his activities through a set of 19th-century aquarelles by the hand of Ludovico Ferretti exploring themes such as the death of Moses, which Signorelli depicted in Rome. Although the approach to look through 19th-century eyes is valid in the absence of preparatory drawings by Signorelli’s hand or photographs of the site in Rome, this small section is not entirely convincing; a virtual tour of the relevant part of the Sistine chapel, if possible, would have given the visitor a better idea of Signorelli’s contributions in Rome.

The epicenter of the exhibition displays Signorelli at the height of his remarkable qualities as an artist in the 1480s and 1490s. This central period marks a number of tondi, such as the Sacred Family of c1485, displayed around the room depicting bodies charged with energy as to exceed the boundaries of realism, a true Italian Renaissance style can be observed here. The focus of the entire exhibition can also be found in this room. Taking over most of the space, the Sant’ Onofrio Altarpiece of 1484 commissioned by Bishop Jacopo Vannucci for the Cathedral of Perugia demands the spectator’s attention although his gaze is not returned by any of the actors in the narrative and seems rather introspective. There is an abundance of references to knowledge through the display of books that keep most of the figures occupied. The colouring is reminiscent of Perugino and Raphael, whereas the small details carefully positioned as flowers, the bishop’s hat or the ornate decoration of the Virgin’s throne remind the beholders of similar attention to detail in, for example, the work of the Venetian Carlo Crivelli. Although the altarpiece is devoted to the Madonna and Child it seems it is the musical angel who draws most of the crowd in; his fine features concentrated on the task at hand of tuning his instrument, the almost childish belly bursting out of his body and the delicate position of his feet and hands make him a most attractive object for contemplation. What is enjoyable for the viewer is the setting of the altarpiece; it has to be approached from a distance and there is a divide created by the two or three steps in between beholder and painting; recreating the original place of the high altar position, which a piece like this would have occupied.

Further rooms accentuate Signorelli’s already mentioned skill in depicting nudes. His technical qualities are specifically noticeable in the Two Virile Nudes, also part of the earlier mentioned Pala Bichi. The much smaller exhibition in the Pinacoteca Comunale at Città di Castello equally displays Signorelli’s insight into the true method of making nudes work; the Martyrdom of Saint Sebastian showing the muscular torso and well developed legs of the martyred saint in contrapposto pose is an interesting example.

However, the artist’s outstanding abilities as a Renaissance draughtsman and student of the human figure and its anatomy is most clearly conveyed through the display of 25 or so drawings from collections in Windsor, Paris, London and Florence. The drawings, as Claire van Cleave mentions in the introduction to this section, need be seen as “fundamental for an understanding of Signorelli’s grandiose heroic humanity”. This grand ambition of Luca Signorelli’s depictions is seen most famously expressed in at least one of the other venues of this exhibition; Orvieto cathedral holds the artist’s most priced and famous work, the frescoes depicting among others Il Paradiso in the San Brizio Chapel, admired greatly by the younger Raphael. At the Galleria Nazionale in Perugia the San Brizio Chapel can be studied in detail on a large screen, which allows visitors who cannot travel on to Orvieto a comfortable view of this masterpiece. Together with a number of paintings from Signorelli’s final years, such as the impressive but modest in size Flagellation (1509-13), the San Brizio Chapel concludes the visitor’s comprehensive and wide-ranging view of Luca Signorelli’s oeuvre.

Upon passing through the green belt of Italy that is Umbria, a visit to this exhibition is, in my view, highly recommended. Part of a growing initiative to represent Umbrian painters of the Renaissance (Perugino 2004, Pintoricchio 2008 and Piermatteo d’Amelia in 2009-10) this exhibition offers innovative ways of constructing the museum framework and encourages the visitor to venture onto routes less travelled that preserve works by the artist; Morra, Umbertide and, beyond the regional boundaries, Sansepolcro and Cortona, Signorelli’s hometown, will keep the cultural mind avidly occupied. 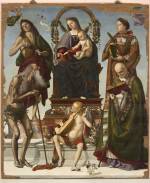 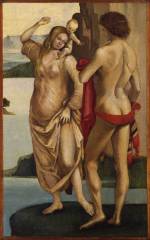 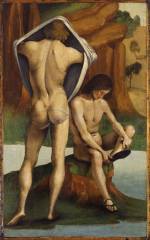 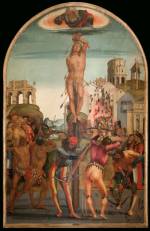