A suite of new works by the German painter, exploring the theme of Arcadia, mix inscrutability with assertiveness 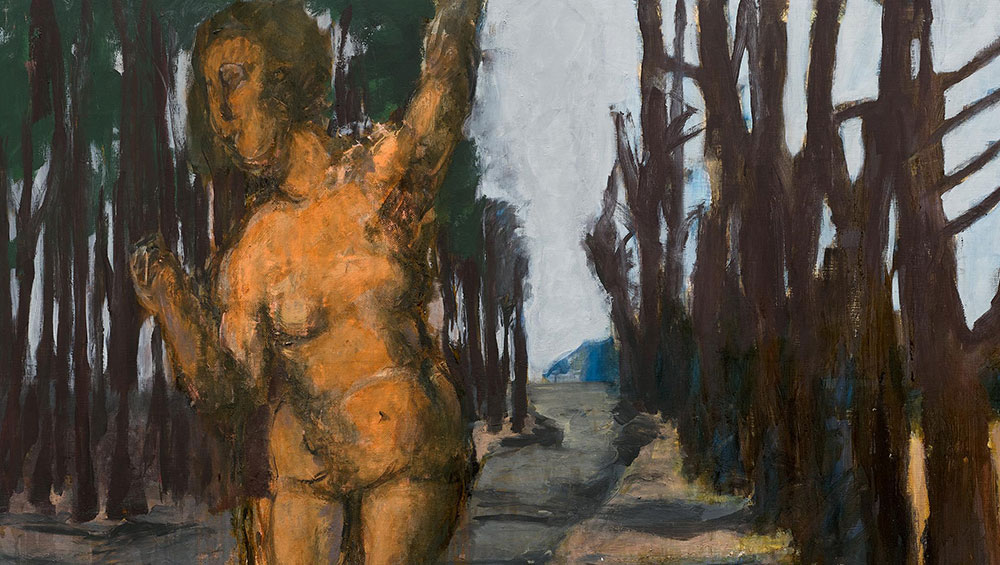 This is Arcadia, but not as we know it. Aktaion (Actaeon) (2020), the largest canvas in the exhibition of recent paintings by Markus Lüpertz (b1941, Bohemia), depicts one of the goriest passages from Ovid’s Metamorphosis. The hunter Actaeon, having stumbled on the goddess Diana’s secret bathing spot, has been transformed into a stag. Those familiar with Titian’s The Death of Actaeon (1559-75), housed a short stroll away at the National Gallery, will be well aware of what happens next. In Nicolas Poussin’s phrase: et in Arcadia ego. 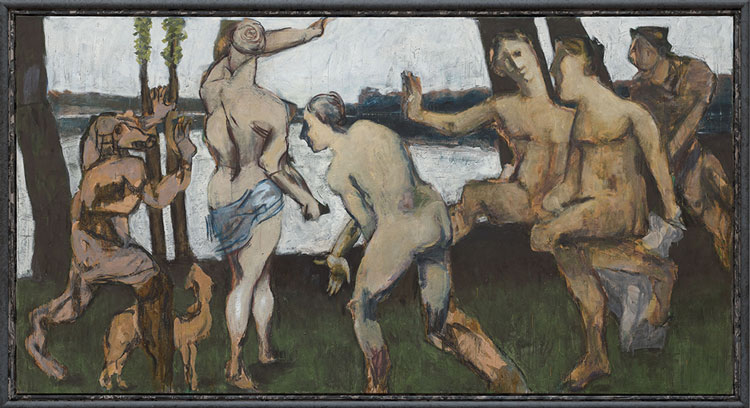 Lüpertz’s piece takes for its model not Titian, but the lesser-known Florentine painter Luca Penni, whose version is held in the Louvre. Penni was one of several painters who beatified the French royal Palace of Fontainebleau, and his rendition has a decorative stateliness. Lüpertz has lifted six of Penni’s figures, but roughened them up, translating their delicate bodies into dense, somewhat sculptural forms. Shorn of detail, Actaeon seems to buckle with primal fear. Lüpertz’s paint is assertive, almost pugnacious. Smears of it adorn the frame, as if they have leapt out. 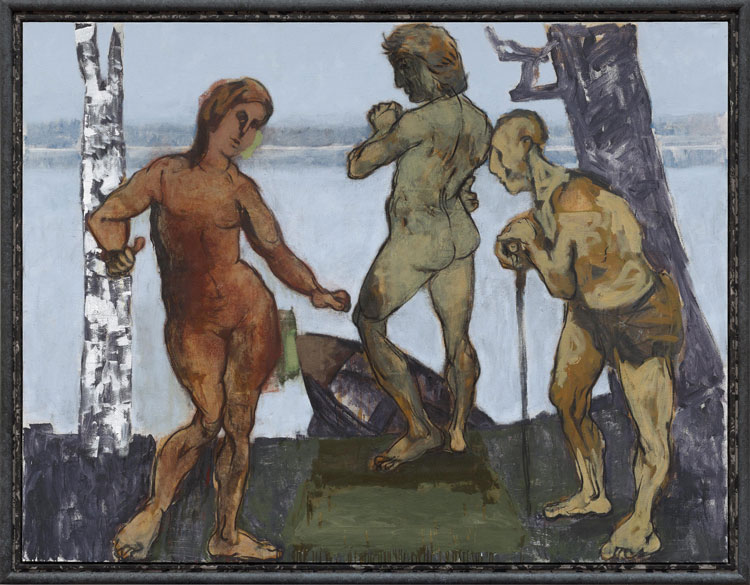 The painting’s fleshy colours are more muted than Penni’s, as though faded with age. This might reflect the fading of Lüpertz’s models from public consciousness. A second massive work, Jasons Abschied (Jason’s Farewell) (2020), adopts three figures from Luca Signorelli’s The Education of Pan (c1490), a painting that was destroyed in a fire in Berlin just days after Germany’s surrender in the second world war. Lüpertz has excised Pan altogether. One scene has become another. The central figure, now the hero, Jason, prepares to board the Argo. But instead of an ocean-going ship, he has a lakeside rowing boat.

The same lake appears in Aktaion, as well as several of the exhibition’s smaller works, often (but not always) depicted as an unyielding rectangle of white. The classical Arcadia, like the region in the Peloponnese of the same name, was hilly and golden-hued. Lüpertz’s is palely lit and largely flat. One painting, Märkische Allee III (2017), features a road curving into the distance with the merest hint of a bump. Lüpertz’s landscapes are based on those that surround his studio in the March of Brandenburg, into which he brings characters classical and biblical, Arcadian and Edenic. An Eva (Märkisch) (2017) pulls the apple almost to her mouth, while a nude Nymphe Märkisch (2020) strokes her hair. 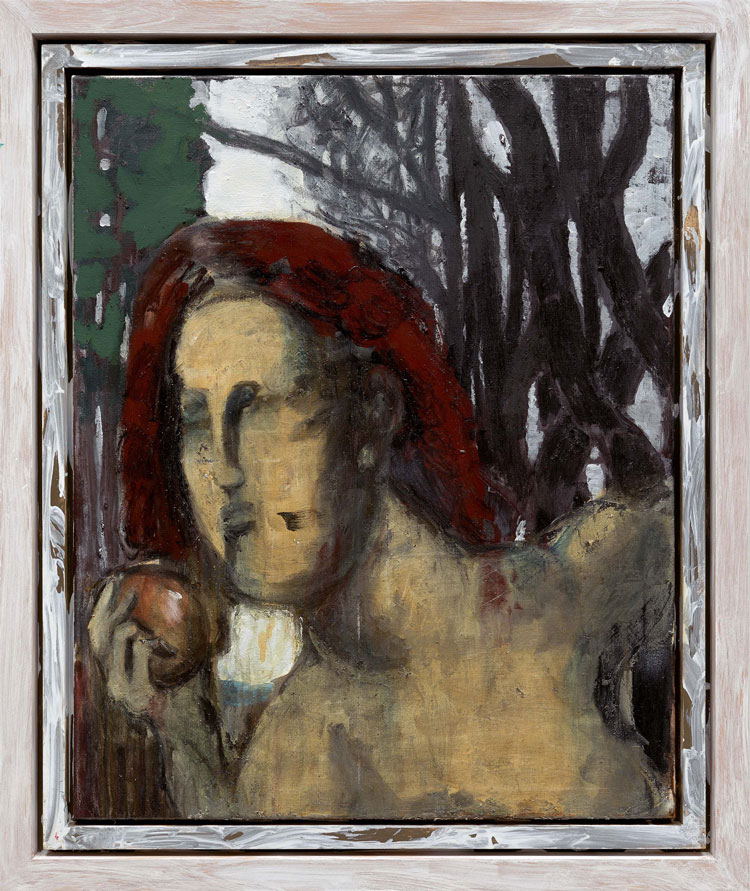 The Marches were historically viewed as an unpromising in-between land until it became reinvented as Prussia’s heartland in the late-19th century. Lüpertz sometimes seems like a monument from that earlier era. Always immaculately turned out, in a style that makes little concessions to the past 100 years, he cuts an intimidating figure. He publishes a “journal of diagonal thinking”, Frau und Hund. He was rector of the Düsseldorf Kunstakademie for two decades, during which he packed the faculty with esteemed fellow artists and emphasised traditional mediums. He has written at least two manifestos. All of which might imply a painter easier to respect than enjoy. 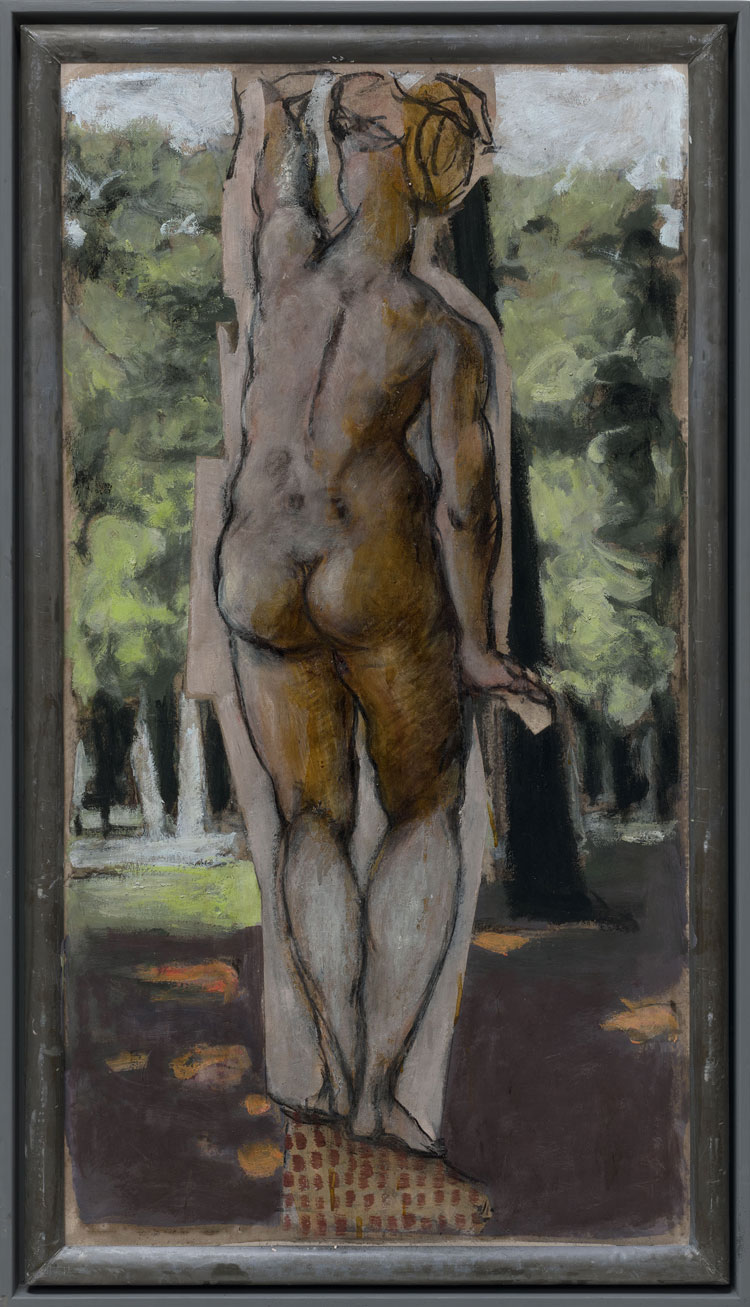 Underpinning it all is an unshakable faith in the importance of art, by which he means painting and sculpture. Lüpertz appears to view less aesthetically pure tendencies with a fogeyish disdain. In a 2017 interview with Artnet, he said: “In this moment, we could all paint the greatest pictures, because we have unparalleled freedom. But nobody accepts it. Only us old sacks of shit live with it. But the youth isn’t interested. They ’d rather save the world from extinction, or stop the poles from melting — that ’s all nonsense.” There is surely a drollness here. But his exasperation with those who ignore the present’s unshackled painting rings clear.

Lüpertz belongs to a group of German artists, clustered around Michael Werner ’s first gallery in Cologne, who sought to revivify painting for the post-conceptual age. They faced a dilemma. The figurative tradition had been morally soiled by its associations with fascism, and figurative images had been rendered banal by mechanical reproduction. Abstraction had become inextricably bound with the US. To adopt it would be imitative at best, submission at worse.

Lüpertz’s solution to this problem drew on the seriality of cinema and animation. Early series turned Mickey Mouse and Donald Duck into frantic, unrecognisable whorls of paint. In 1962, he premiered his dithyrambic paintings. Named for the wild hymns sung by devotees of Dionysus – and revived by Friedrich Nietzsche – these interspersed figurative elements with blocks of abstract colour.

Through the decades since, Lüpertz has made a succession of volte-faces: a period focused on German motifs such as Wehrmacht helmets, flags and antlers; a passage of abstraction; an era devoted to reinterpreting art history; and a turn to landscape. But despite the variousness of his genres, the same pushes and pulls – abstract and figurative, pathetic and bathetic, severity and smirk – remain throughout. Recent retrospectives have turned to mash works together from throughout his career, a bewildering soup. 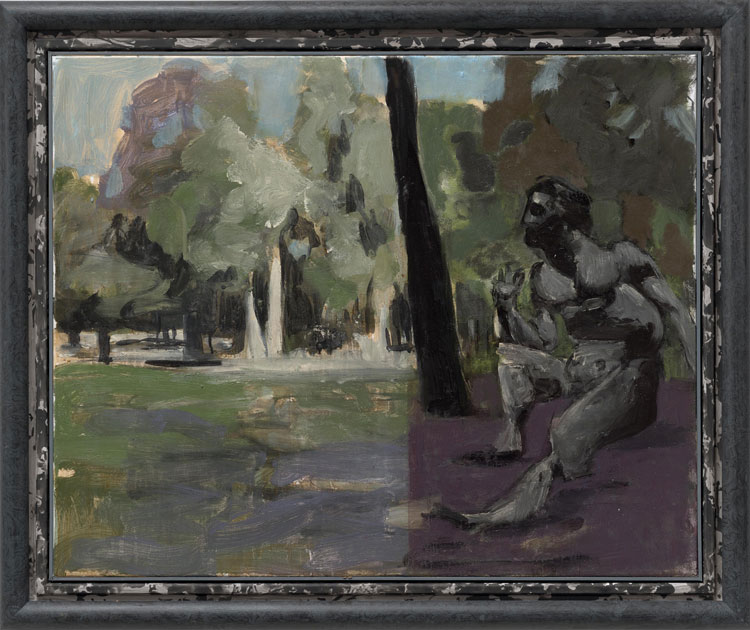 In this context, Lüpertz’s turn to the Arcadian seem like the calm after the storm. The tone is at times pensive, though the forcefulness of Lüpertz’s technique remains. There are recurring forms, odd juxtapositions and odder severances. A second Jason (2020) is cleaved across four canvases. There are three paintings of Adam (all 2020), with a form borrowed from Jacopo della Quercia ’s bas-relief at San Petronio in Bologna. But Lüpertz has removed Della Quercia’s God, leaving the first man alone. His reach towards God becomes a hollow greeting to no -one.

Much in this work is inscrutable. “To introduce a sense of logical development,” writes the art historian Eric Darragon in the exhibition’s catalogue, “… is a vain enterprise. You come up against the artist’s own, very different kind of logic.” What remains clear throughout is Lüpertz’s prowess. The largest of the Adams sees its subject shrouded in darkness. A whitish line cuts through the scene, then links with a yellow path along painting’s lower rim, disconnected from the woodland above it. I admit I am not entirely sure what to make of these things. But the definition of Adam’s body within the shadows, the impress of light on the grass, the greyish green bunches of leaves in the trees above all speak to paint’s power to communicate.