The opening room at Hauser & Wirth Somerset has been transformed into a spider’s lair, a fitting scene to start this exhibition of late etchings by Louise Bourgeois, seen here together for the first time 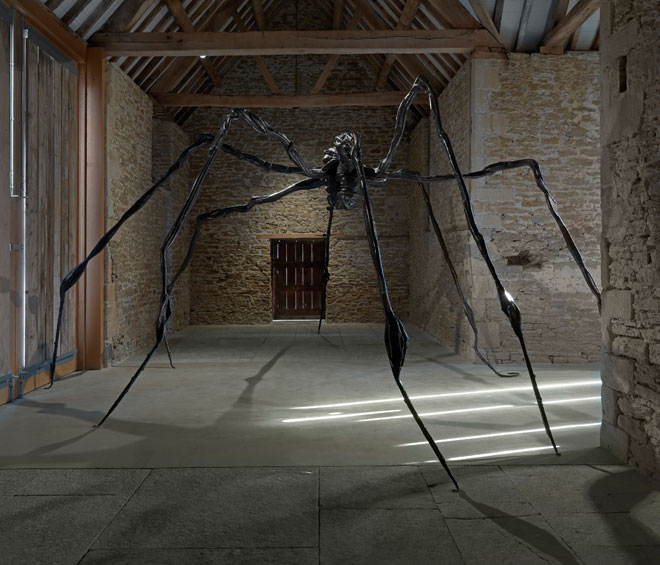 Despite a career of more than seven decades, which encompassed an extraordinary output of work in all media – painting, drawing, printmaking, sculpture and installation – Louise Bourgeois (1911-2010) is irrevocably associated with one particular form: the spiders, often enormous, that she sculpted throughout the 1990s. Maman (1999), the largest example and the inaugural work displayed in Tate Modern’s Turbine Hall, towers almost nine metres (30 foot) high, her spindly bronze legs forming an enclosure that you can walk through; above, 26 marble eggs nestle in her protective sac. The image of the spider, Bourgeois explained, is one of protection, nurture and feminine skill: it is connected with her mother, manager of the Bourgeois family’s tapestry restoration business in Paris, where the young Louise first tried her hand at cutting, stitching and weaving.

It is fitting, then, that the opening room to Hauser & Wirth Somerset’s exhibition of Bourgeois’s late etchings has been transformed into a spider’s lair, home to a compact arachnid whose tendrils stretch across the darkened threshing barn (the beautiful gallery, which opened in July 2014, is housed in a renovated farmyard). The spider figure foreshadows many of the themes of this exhibition, which is largely predicated on the female body and is suffused with imagery related to spinning and weaving (occupations that the spider and Bourgeois’s mother share) – threads, needles, tangled webs.

Examining the character of Helen of Troy from Homer’s Iliad, who weaves tapestries to reassert her sense of self while men on the battlefield below fight for her body, Anne Carson, in her poem Candor, writes that weaving is “the quintessential female work – because a household needs cloth. Because the designs of women are as tangled and purposeful as webs. Because of that skein in the belly.” In Bourgeois’s work, too, the “skein in the belly” is figured as a metaphor for female creativity: images of wombs, breasts and entangled chains of ribbon-like swirls recur across these works. The Chain of Events (2007) resembles a knotted necklace or perhaps intestines; in Self-Portrait: La Nausée (2001), the torso of a squatting female form is composed of a meandering ribbon shape, the body stripped bare. These threads, Bourgeois herself suggested, were her way of representing the self, as shown in the words she inscribed on the final drawing of her 2004 series Sonny and Cher: “Rocking to infinity the red skein it will never be interrupted, abandoned or cut. There is one eternal thread and it is you.”

Most of the works in this show are large-scale etchings, made between 2006 and 2010 (Bourgeois made several etchings in her early career, then returned to the form towards the end of her life); these are placed alongside sculptural works from across her career. The rooms are vaguely arranged according to theme: family, nature and sexuality. In the “family” room, two works sit on the same wall, as if in conversation: The Pacifiers (2006) depicts a tower formed of shapes similar to babies’ dummies, like a Tower of Babel but with each voice stoppered; nearby, My Secret Life (2007) shows another tower, this one of phallus-like shapes enclosed within – supported by – the outlines of mountainous breasts. The effect is reminiscent of Bourgeois’s sculpture Nature Study (1984), which she has described as a self-portrait: a headless figure with four breasts, symbolising Bourgeois’s role as protector for her husband and sons. Elsewhere, the rolling shapes of breasts recur in a sculptural work, My Blue Sky (1989-2003): a rusted window frame, taken from Bourgeois’s own basement, stands with one panel of dusty glass intact; the rest are left open to reveal a scene behind, white mountains dappled with deep red in front of a blue sky. The window could be seen either as a figure of entrapment – like the meshed enclosures of her celebrated Cells series – or of freedom.

The small sculpture Topiary (2005) – a bronze statue of a female figure merging at the head into foliage resembling the top of a pineapple – marks a shift from the female body to the natural world, represented across the largest space, the Rhoades Gallery; this dichotomy, however, masks the fact that for Bourgeois, these two themes are inextricable. She wrote: “Our own body could be considered, from a topographical point of view, a land with mound and valleys and caves and holes.” Tower-like structures, often composed of those ribbon-like lines, here resemble trees and plants, yet retain a certain flicker of humanity. In Up and Up (2006), the branches of a simple cactus-like structure could almost be human arms; Swelling (2007) is reminiscent of organs and a womb, while the pattern from Up and Up recurs, here looking more like a spine. The precise, totemic towers formed of interlinked chains recur in a series of huge works entitled Look Up! (2009-10); their insistent verticality recalls a sculpture presented in the exhibition’s second room, Untitled (2005), a glass case containing a tower of bulging stained sacks (recalling Yayoi Kusama’s phallus-covered furniture) and a tower of fabric blocks like bricks or sponges, stacked asymmetrically, and resembling the humanoid Personages sculptures that Bourgeois showed in her first New York solo exhibition of her sculptures, in 1949.

The exhibition’s final room is its most dramatic, featuring large, violent works, often accompanied by searing poetic texts. One pair of works stands out: on either side of a wall, two works interrogate the idea of the gaze. In I See You!!! (2007), the back of a head blends into a torso, which in turn becomes a larger head, both covered in rough scrawls of open eyes. Honni Soit Qui Mal y Pense: I See You!!! (#5) (2009) takes the same outline, but, here, a terrifying face has been daubed roughly over the back of the head in red paint. Eyes are a constant refrain in Bourgeois’s work, from the two marble benches carved in the shape of lidded eyes that stand permanently in this gallery’s garden, to Cell (Eyes and Mirrors) (1989-93), in which mirrors like satellite dishes are trained on a pair of marble eyes, which are trapped within a cage, distorted and reflected infinitely. Disquieting and bold, these works are a strong end to a fascinating exhibition that complements and deepens the sculpture-heavy Bourgeois show displayed in the first Artist’s Room at Tate Modern Switch House.

The exhibition at Hauser & Wirth Somerset is accompanied by Mumbling Beauty, a series of emotive photographs of Bourgeois by Alex Van Gelder, taken between 2008 and 2010. The artist appears masked, holding a knife, sitting on a chair as pigeons flap around her, facing a mirror with her eyes closed, huddled in contemplation in a white fur coat. In only one picture does Bourgeois appear serene: the one in which she is holding a paintbrush, dipped in red paint and poised over the canvas. 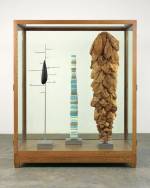 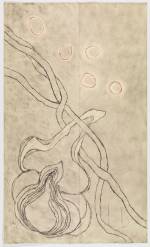 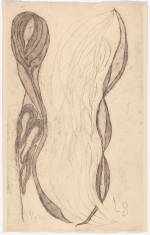 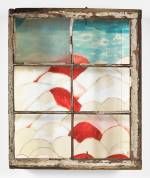