Life of Cats: Selections from the Hiraki Ukiyo-e Collection

Life of Cats: Selections from the Hiraki Ukiyo-e Collection

Cats came to Japan from China in the sixth century, aboard ships carrying Buddhist texts. An enchanting new exhibition at the Japan Society presents these frolicsome felines in a distinctly Japanese cast, in ukiyo-e paintings and woodblock prints by Edo-period masters of the genre

The wit and creativity of Edo-period (1615-1866) masters of ukiyo-e paintings, woodblock prints and book illustrations are everywhere apparent in a delightful new show at the Japan Society, featuring a selection of prints from the Hiraki Ukiyo-e Foundation, along with paintings on hanging scrolls, manga, porcelain and printed books from private collections in the US, and even a print by Édouard Manet, one of the many western artists inspired by the dramatic compositional strategies, flat perspectives and exotic details to be found in ukiyo-e.

Established more than 40 years ago by the founder of the Riccar Sewing Machine Corporation, the late Hiraki Shinji, the aim of the Hiraki Collection is to preserve an art form that provides a window into the cultural and literary life of Japanese of all classes during the Edo period, a time when the country was experiencing a rapidly rising literacy rate, a growing urban population, profound economic and political changes, and, during the Meiji Restoration (1868-1912), the end of centuries of isolationism and a surge toward territorial expansion through military campaigns in Korea, China and Russia.

Ukiyo-e was a popular form of entertainment and, as such, a mass-produced, ephemeral commodity. Once rabid collectors in the west began acquiring prints from the mid-19th-century on, concurrently with waning appeal to the Japanese, the number of high-quality prints in good condition available for native collections dwindled. The Hiraki Foundation contains beautiful examples, some designated Important Cultural Properties and Important Art Objects.

Foundation director Mitsunobu Sato says: “Our collection houses a wide variety of woodblock prints from the very early period and also masterpieces by Kitagawa Utamaro, Tōshūsai Sharaku, Katsushika Hokusai, Andō Hiroshige and Utagawa Kuniyoshi, who were active during the height of the ukiyo-e culture in the 18th and 19th centuries in Japan. The collection also includes many modern and contemporary prints. Because of this wide range of works, the collection proves that the origin of the long history of the Japanese print movement originated from ukiyo-e of the Edo period.”

From a silhouette of a cheeky cat on the admission stickers to a charming cat-shaped structure in the first gallery acting as a portal to an enchanted world, the details of the exhibition display were expertly chosen by the Japan Society Gallery staff, led by gallery director Miwako Tezuka, to reflect the multifaceted, enigmatic nature of cats: by turns, playful, self-contained, cosy, combative, protective, predatory, and even sinister as ghosts from Japanese folklore, Buddhist texts and Edo-period literature. Themes explored are cats and people, cats as people – giga caricature, cats versus people – bakeneko monsters, cats transformed – imagination and realism, and cats and play.

Tezuka wrote the slim but equally charming colour catalogue. Although the volume will serve as a lovely keepsake, perfect for cat lovers everywhere, one wishes for a more extensive examination of the fascinating history of ukiyo-e culture (originally, such was planned in association with Yale University Press); for, as Sato notes: “Ukiyo-e allows us to take a peek at the liveliness of Edo-period Japan because it was the medium that showed people the latest trends and current affairs, as well as culture, literature and theatre of their time.”

The Japan Society is showing some toy prints (asobi-e and omocha-e) with cat characters, which were even less likely to survive, given their purpose. Those with a taste for these should visit Playing with Paper at the Museum of Fine Arts Boston, until 19 July, to view board games, intact paper dolls, cutout dioramas and pictorial riddles displayed in the museum’s Japanese Print Gallery. Those travelling to Japan may want to indulge in more cat-themed culture by visiting Covered in Cats, the Maneki-neko-tei Collection, at the Shimane Art Museum in Matsue, Shimane Prefecture, until 6 July, where more than 300 cat prints are displayed.

Typically, woodblock prints are exposed to light for short periods of time to prevent natural pigments from fading and moisture damaging the fragile paper fibres. At the Japan Society, the initial rotation of prints switches at the end of April, so it is worth revisiting the exhibit after 26 April, when the first round closes. Tezuka explains: “Ukiyo-e prints, particularly those printed before the start of importation of chemical dyes to Japan in the latter half of the 19th century, often used vegetable dyes, many of which are fugitive colours sensitive to light exposure. Ninety prints on loan from the Hiraki Ukiyo-e Foundation are being rotated because we are following the Japanese Agency for Cultural Affairs’ strict policy to preserve artworks by limiting the artwork display length. But this applies not only to ukiyo-e prints but also to most works on paper from Japan of certain import (ie, those works over which the agency has supervisory control).”

The star of the show, Utagawa Kuniyoshi (1797-1861),1 ranks among the most prolific cat artists in history. He signed his works with a variety of names that incorporated Japanese written characters for the word “cat”; drew such characters in the shape of cats to spell out messages in his prints; used anthropomorphised cats to sidestep censorship from the Tokugawa shogunate; and allowed cats free rein to roam his studio. One look at his caricatures, or giga, and the many parodies of classic and contemporary Japanese literature and folk tales reveals that, while visitors unfamiliar with these stories will still enjoy the exhibition, recognising the names of the kabuki actors and plays, warrior tales, narrative themes, puns and world play would amplify the experience.

“Ukiyo-e” comes from the central Buddhist notion of a fleeting or transient world, in which all is pain and sorrow. During the Edo period, Asai Ryōi’s novel Tales of the Floating World, c1661, flipped the idea around to celebrate a spirit of carpe diem, in which the growing merchant class, wealthy but politically impotent, revelled in Edo’s pleasure districts, kabuki and traditional Noh theatre, thriving book publishing industry and, quite emphatically, the company of courtesans and geisha. In fact, much of how the west views Japanese cultural production –ukiyo-e prints, lacquer, kabuki – comes from the Edo period. Within Japan, people could keep up with the latest styles by looking at theatre posters and prints of courtesans, whose countenances might be stylized, but whose dress was accurately “fashion forward”.

Eventually, savvy publishers saw that the market for ukiyo-e extended beyond the wealthiest classes, including samurai, and realised the potential for mass market inherent in the woodblock printing process; different grades of paper resulted in what we would call different “price points”; the application of more expensive and longer-lasting mineral pigments and other special effects catered to the elite; and early impressions were touted as collectible. If a printed image proved to be popular, they initiated additional print runs. After the country opened to western influence and commerce, following American Commodore Matthew C Perry’s 1854 diplomatic expedition to the Tokugawa shogunate and subsequent signing of the Kanagawa Peace Treaty, inexpensive synthetic pigments became available, further lowering production costs. The least expensive prints could be had for little more than the price of lunch at a noodle shop.

Via a four-part team of publisher, artist, block-carver and printer, the country was literally overrun by woodblock prints, which were used for advertising, theatre posters, portable travel souvenirs such as fans, and small-sized illustrations that could be used to study Japan’s geography now that roads were being built to connect major cities. Prints were issued in series, like today’s comics and manga, to ensure that collectors kept making purchases; some favoured warrior images, particularly by Kuniyoshi, who affected fashion by giving his fierce samurai tattoos; others amassed images of courtesans, immortalised by the likes of Utamaro (1753-1806); parents purchased toy prints as learning tools for their children; and, naturally, prints featuring cats drew a loyal following. With the Tenpō Reforms of 1841-1843, sumptuary laws involving censorship of entertainments focused on political figures, decadent courtesans and kabuki actors, artists and collectors pursued landscapes, with Hokusai, the eccentric “Old Man Mad About Drawing” (1760-1849), and Hiroshige (1797-1858) leading the way. Landscapes, though a late addition to the ukiyo-e canon, became much sought after by collectors in France, England and America.

A critical aspect of ukiyo-e history, one which is itself an adventure, is how the genre manifested in late-19th- and 20th-century western art. Just as Japanese artists were being exposed to three-dimensional visual perspective and subjects from the west, changing their own aspirations and tastes, those in the west –ranging from the impressionists and post-impressionists, fauves, symbolists, nabis, Vienna Workshop, Charles Rennie Mackintosh, architect Frank Lloyd Wright, painter/designer Louis Comfort Tiffany, and countless others –revolutionised their art through a devotion to the form. Stories abound of how Vincent van Gogh, for example, sold his paintings to purchase prints he found used as wrapping in crates of porcelain exported from Japan, and Manet selling paintings to acquire ukiyo-e. Edgar Degas, another admirer, began to make paintings in the shape of fans, while James Abbott McNeill Whistler studied the atmospheric effects in Hiroshige’s landscapes and adorned his interior scenes with fans, screens and kimono. Pablo Picasso was enamoured of a popular subgenre of uikyo-e, erotica. Mary Cassatt collected the prints, and the influence of their flat perspective is pronounced in her compositions. Today, animator Hayao Miyazaki claims kinship with Hokusai and other iconoclastic ukiyo-e artists; artist Takashi Murakami developed his “superflat” theory based on the close-up cropping, two-dimensional perspectives and bold, black outlines filled with unmodulated colours in ukiyo-e prints.

And then there are the stories of dealers such as Siegfried Bing (1838-1905) and Hayashi Tadamasa (1853-1906) in France; art historian Ernest Fenollosa (1853-1908) at the Museum of Fine Arts Boston; collections begun at the British Museum, Victoria and Albert, Metropolitan Museum of Art and Smithsonian Institution; wealthy collectors such as the Havemeyers in New York, who became benefactors to museum collections, lectures and exhibits for New York’s aristocracy at the Waldorf Astoria, and exhibits for patrons of the arts at the Grolier and Tile Clubs and the Century Association.

Life of Cats is about so much more than adorable domestic animals. It is the beginning of an engagement with one of the most visually dynamic and culturally nuanced art forms from any era. 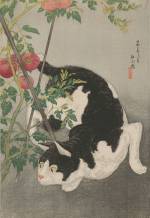 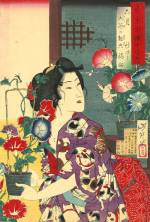 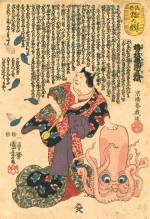 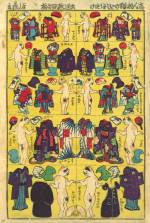 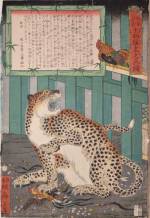 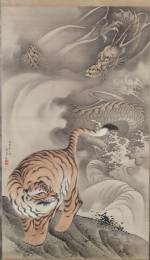 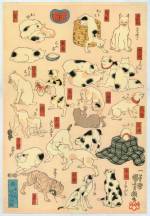 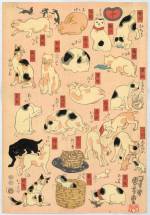 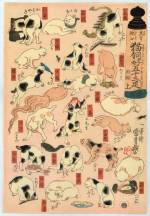 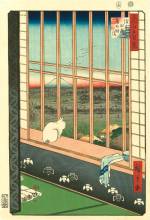