Ostend’s master draughtsman oscillates between retreat and escape, nocturnal and diurnal, imbuing the everyday with an eeriness 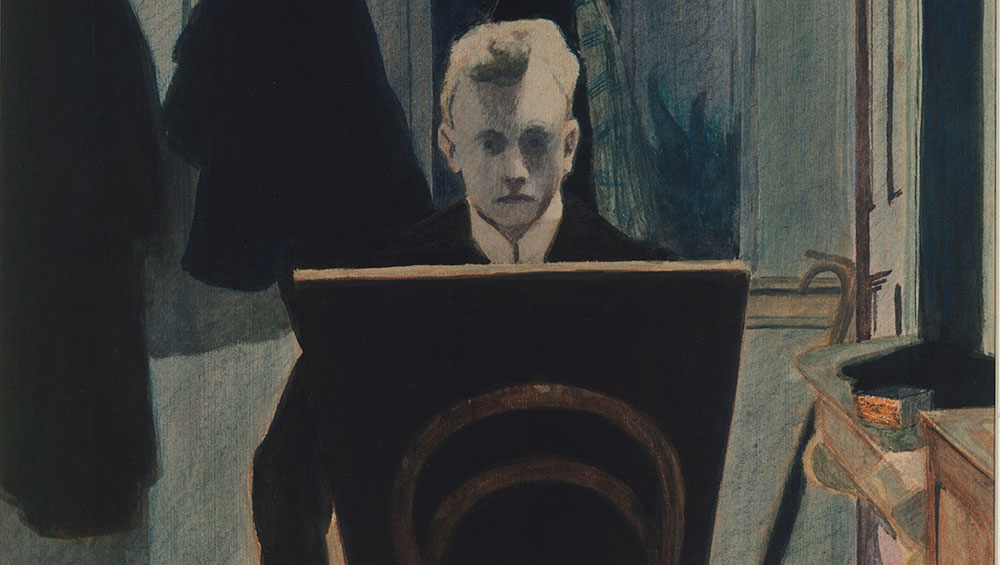 Royal Academy of Arts, London
23 February – 25 May 2020
(The Royal Academy is temporarily closed because of Covid-19)

The art of the Belgian draughtsman Léon Spilliaert (1881-1946) attracts a particular lexical cluster: nocturnal, twilit, hushed, ghostly, sepulchral, murky, muted and gloomy. On the evidence of a monographic exhibition of his works, at London’s Royal Academy, none of these adjectives is misplaced. Spilliaert strolled the streets and the seafront of his native Ostend, capturing the resort town in Indian ink and gouache. Working in a palette dominated by greys and blues, he turned a flash resort town into an eerie plain, empty apart from the occasional, usually solitary figure. 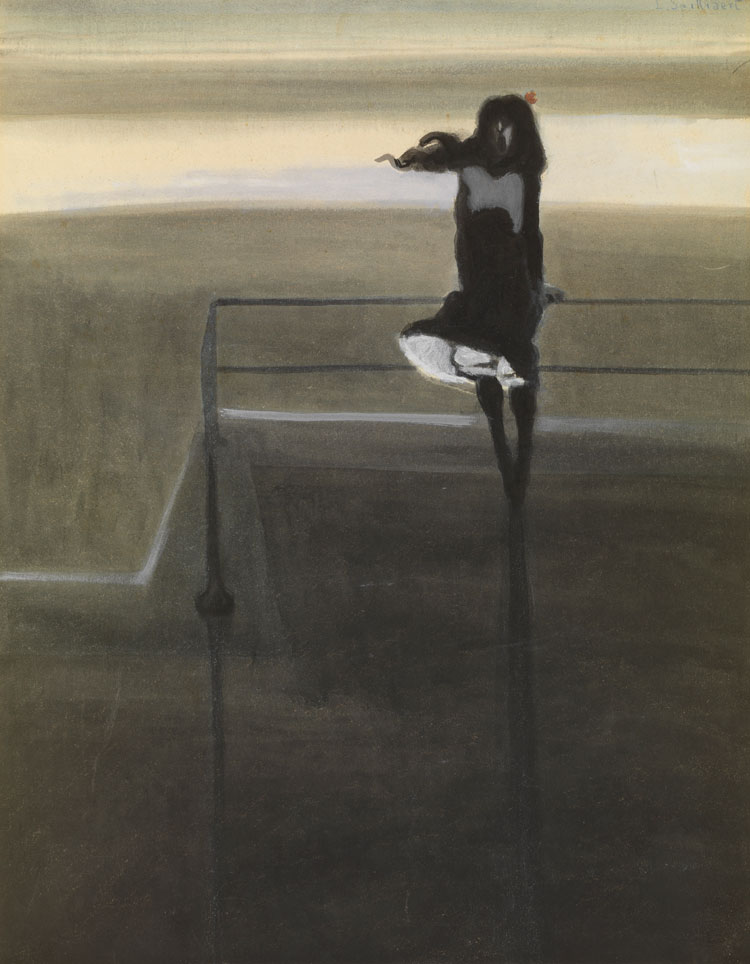 Two girls stand so closely in the waves that they appear a single person; the stick-like silhouette of a man runs shivering out of the water after a freezing dip. Moonlight and Lights (c1909) is like an umbral northern negative of Vincent van Gogh’s Starry Night (1889), where the moon’s reflected glow struggles to be seen through the haze of clouds and the artificial glow of streetlight. The swarming clouds resemble the portal to heaven of Bosch’s Ascent of the Blessed (1505-1515), except without the promise of paradise behind. Spilliaert’s sky does not hold celestial secrets, though, but gazes blankly down at the town beneath.

Spilliaert is one of those artists who is often viewed by comparison with others, even though there is much about his work that is sui generis. Because of the penumbral palette and his association with the poet Émile Verhaeren, he has long been lumped in with the Belgian symbolists, a loosely associated group characterised by a melange of morbidity and eroticism so extreme that it would give Gustave Moreau pause. 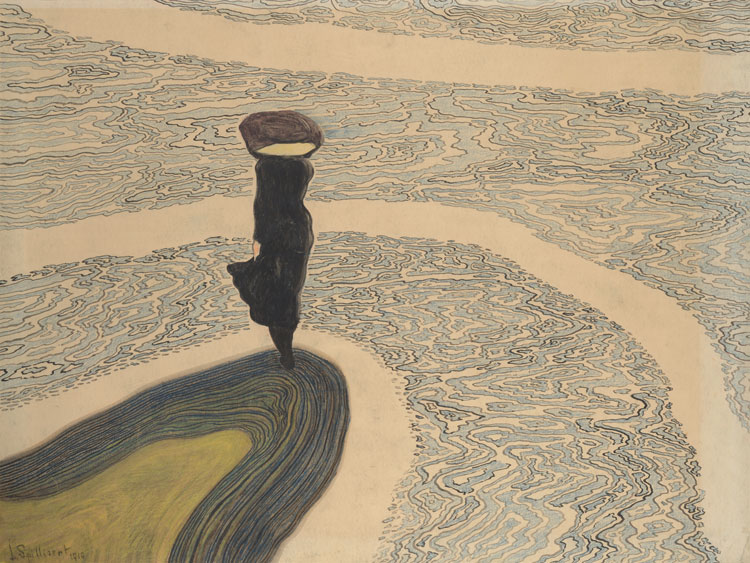 Early on, as a lover of Edgar Allan Poe’s macabre stories and an illustrator for Verhaeren and the playwright Maurice Maeterlinck, his work had something of fin-de-siècle gothic. A c1900-02 drawing of a cemetery has vegetation floating like ghoulish shrouds, while the contemporaneous Contemplation images tree trunks as sinister sentinels. But this early tendency towards the weird quickly gave way to worldly observation. Like his otherwise very different Ostend compatriot James Ensor, subject of a superb exhibition in these same galleries in 2016/17, Spilliaert was an artist of everyday life – albeit the everyday life of an odd place, seen as if through a glass darkly.

Ensor and the symbolists are just the most local of the comparisons regularly thrown at Spilliaert. Edvard Munch is another, because of his moody seas, claustrophobic interiors and the Scream-like face of the girl in the Belgian’s The Gust of Wind (1904). But Spilliaert does not share Munch’s overspilling angst. Vilhelm Hammershøi is perhaps closer to the mark, in his obsessive trawling of his own native Copenhagen, but the Dane’s subdued works are lighter, and possessed of Lutheran minimalism alien to the chintzy bric-a-brac of Spilliaert’s interiors. The frilly titular object in Interior with Chair and Opaline Lamp (1909) would scandalise one of Hammershøi’s proto-minimalist spaces. It is curious that all the figures regularly compared to Spilliaert are primarily known as painters, which is perhaps testament to the radiance and textures he was able to achieve with ink and water. The russet-red beach in Returning from a Swim (1907) has a grain you could stroke your hand through. 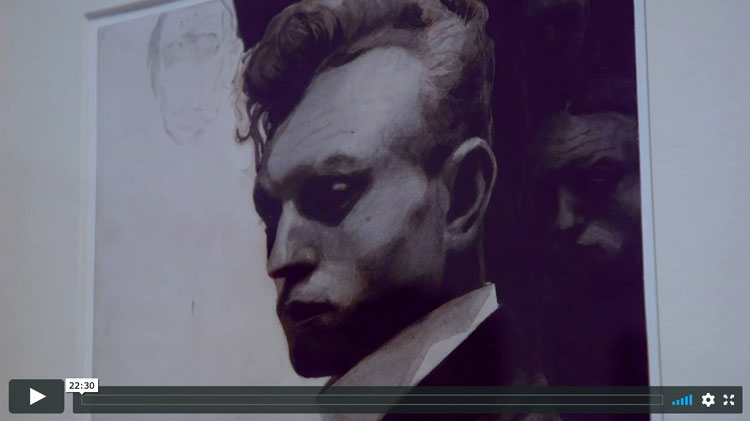 Spilliaert’s confinement to Ostend was not entirely a matter of choice, nor was his preference for nocturnal scenes. An insomniac, he would spend sleepless nights wandering the city. He also suffered from chronic stomach ulcers, which confined him to periods in bed. A trio of renditions of his bedroom, drawn during a particularly severe bout of illness in 1907, emanate claustrophobia. Repeated attempts to relocate – to study at the Academy of Fine Arts in Bruges, to make his name in Paris, to join a pacifist movement in Geneva during the first world war – were thwarted, in the first two cases by ill health and in the latter by the pregnancy of his wife, Rachel, and a lack of funds. This final foray, though, did lead him as far as Brussels and, from 1917 on, he and his family would alternate between the capital and the coast. On his deathbed, aged 65, he asked to return to Ostend one last time, but was prevented by the bitter winter. 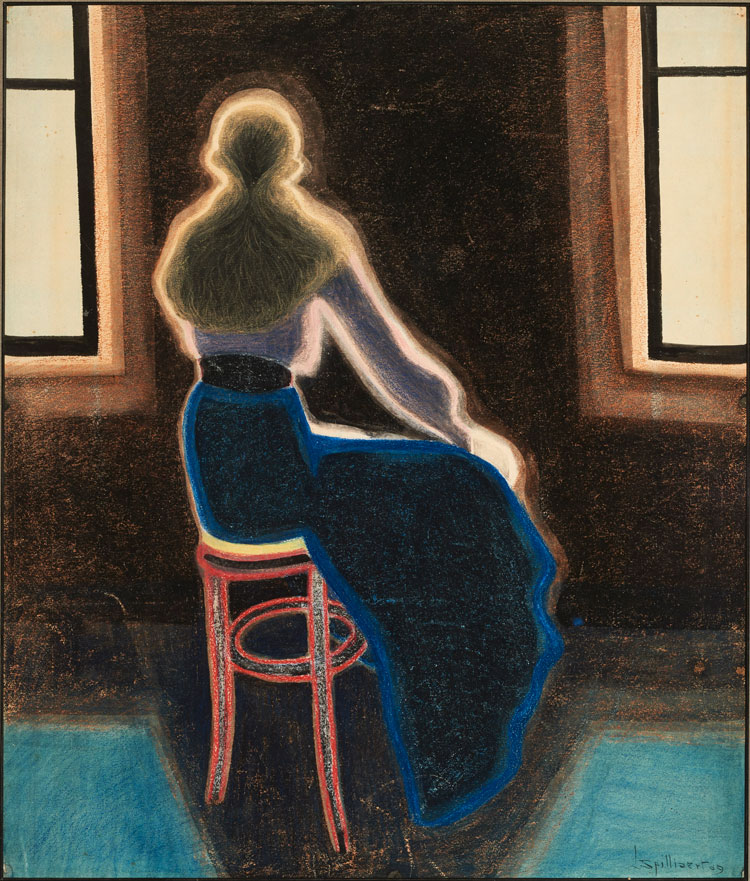 A longing to escape – or at least to have the option – is palpable in many of Spilliaert’s land- and seascapes. In a 1908 gouache and watercolour of Ostend’s Hofstraat, a towering street leads to a lantern in the sea, an inviting will-o’-the-wisp in the murk. Spilliaert’s beaches often surge towards the ocean beyond. These seas often inhabit the bulk of his scenes, with the beach and skies that sandwich them compressed to a narrow strip on either side.

This sort of perspective resembles that later favoured by surrealist painters such as Salvador Dalí and Yves Tanguy, who would populate their beaches with spongy non-representational objects and eccentric distortions of the everyday. Spilliaert instead imbues ostensibly mundane objects with a dreamlike quality. Thrusting vertical structures, such as lighthouses and lamp-posts, become enigmatic punctuation marks in his horizontal beaches and seas. Breakwater with Pole (1909) turns a signal pole into an inviting beacon. The Royal Galleries at Ostend (1908) shows the city’s unique neo-classical beachside arcade as if a row of soldiers were standing to attention against the sea beyond. 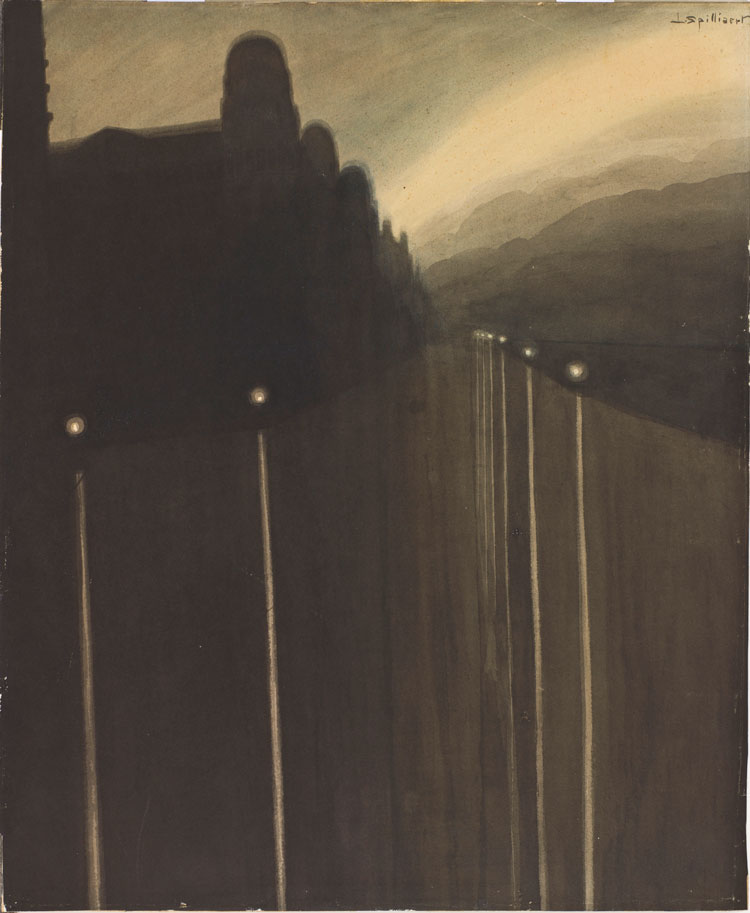 Spilliaert’s yarning for a life beyond Ostend is counterpoised by anxieties as to what lies beyond. Spilliaert’s sea moves in mysterious ways. Drawn at low tide in 1909, it licks the beach as if marking its territory. Fisherman’s Wife on a Jetty (1909) sees a single figure face across the pearly waters, one foot raised to the platform’s edge. Is she waiting for a husband who might never return? Woman at the Shoreline (1910) reprises this outward-looking theme], but unmoors it further from realism, with sand and sea in a whorl. The very real hazard of a disappearance at sea is supplanted by a more inscrutable danger. What mysteries lurk in the frothing waves? Not all of Spilliaert’s figures turn their backs to us, but many that do are in part concealed: The Dominos (1913) centres on two masked figures, one of whose faces is glimpsed only through the side of her mouth. Waiting (1908) depicts a woman sitting almost in profile, angled just enough so that the artist is on the very edge of her peripheral vision. 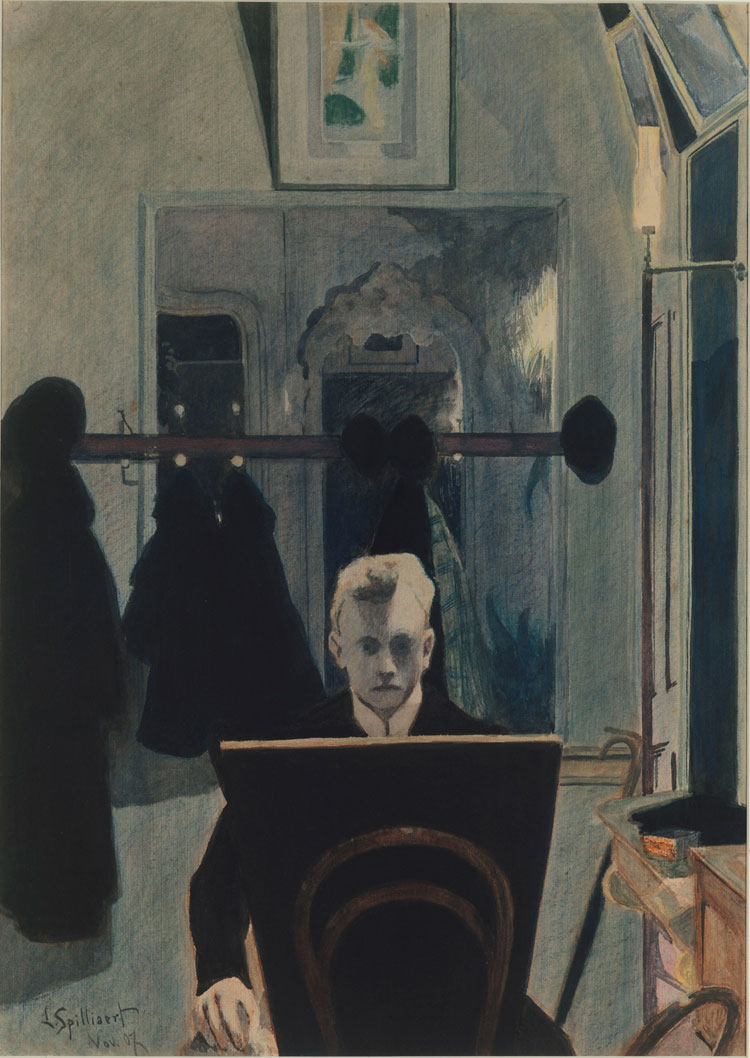 The great exception to this reticence is Spilliaert himself. He produced about 38 self-portraits throughout his five decade-career, several of which are gathered at the Royal Academy. In the Self-Portrait with Masks (1903), his young head and torso are shadowed by the looming visages of middle and old age. In 1907, we see him emotionlessly turning a sketchpad, hidden in silhouette and intently working on a drawing, surrounded by hung-up coats that come to resemble ghostly spectres. The next year he becomes spectral himself, with a portrait of 2 November 1908 showing him lit with unearthly light, and a Self-portrait in Front of a Mirror contorting his features into a death’s head. This is a strange, experimental sequence, and shows Spilliaert simultaneously scrutinising himself and slipping into introspection. 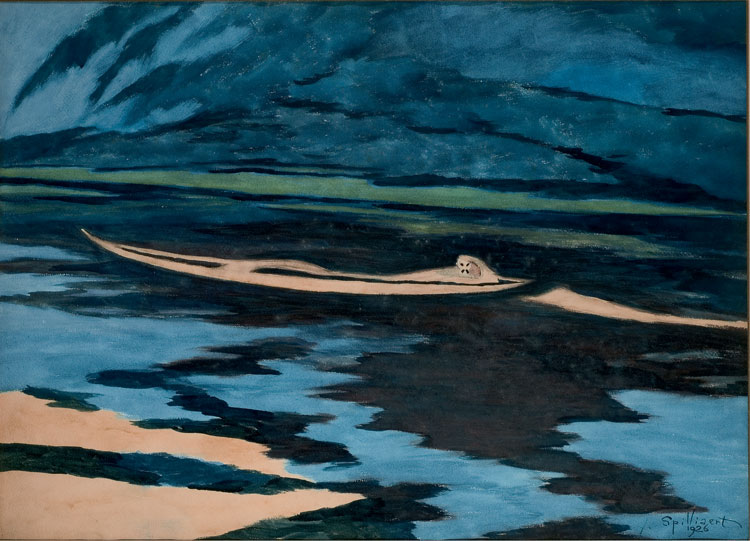 The vast majority of the RA’s exhibition focuses tightly on Spilliaert’s work from the 1900s, but he enjoyed a long career. As he became a family man from the mid-1910s, the gloom gradually lifted. Blue and Yellow Seascape (c1934), with a royal-blue sea and bands of frothing waves that gleam in the light, is almost inviting. When there is jeopardy – as in The Shipwrecked Man (1926), where a skull-like head bobs about in the arrestingly coloured waters, clutching on to his barely there boat – it feels more like an illustration of a narrative event rather than a projection of the artist’s own confined misery. Living in Brussels towards the end of his life, he returned to trees, but drew them as soft and welcoming rather than spiny and sinister. From an artist who once seemed so morose that he named a depiction of a hanging laundry line Misery, this eventual levity might be the most disconcerting turn of all. 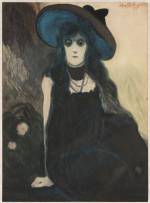 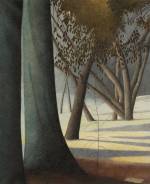