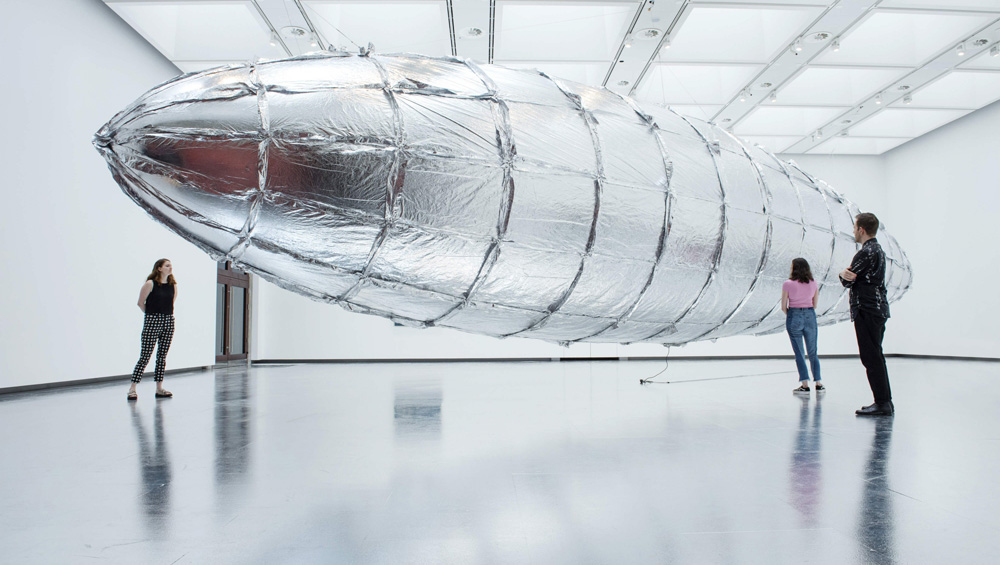 Passing over the threshold of the Hayward Gallery into the exhibition space, you crash straight into a tentacular heap of stacked pink globules, like something HP Lovecraft would imagine lurking beyond the bounds of reason. Look a little closer and, inside the bubblegum mass, you will begin to perceive childlike forms with tiny heads and limbs. Was this thing once human? 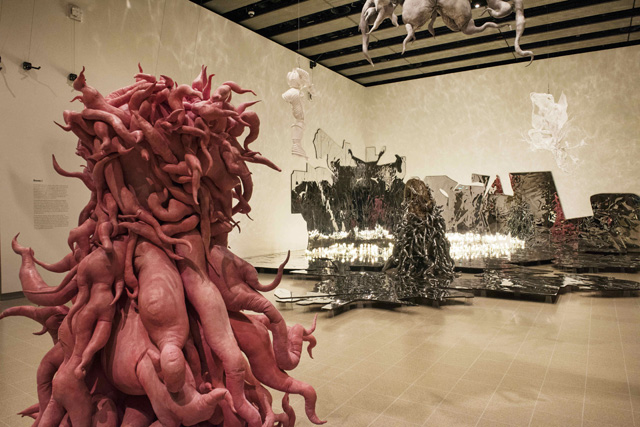 Titled Monster: Pink (1998; this version 2011), it is part of a series by Lee Bul, one of South Korea’s most internationally garlanded contemporary artists. Lee is interested in the mutability of the human body, whether from violent force from without or self-inflicted transformation. The Hayward’s 100-piece retrospective of her work abounds with similar aberrations, some Earth-bound, others suspended from the roof. The Monster series’ quivering organic lumps are joined by space-age cyborgs and the more abstracted, vaguely insectoid sculptures that Lee calls Anagrams; quite the menagerie. They take the ways in which our bodies can be modified to an exaggerated extreme, fantastical enough to excite, but recognisable enough to cause discomfort.

Lee was born in 1964, to the north of Seoul, to a family of communist-leaning dissidents. She grew up under the authoritarian dictator Park Chung-hee. During Park’s almost two-decade regime, which ended with his assassination in 1979, Korea experienced enormous industrialisation and economic growth in a very short time, albeit that the living conditions of a populace ravaged by Japanese occupation and the Korean war improved only slowly. Plexus (1997-8), a bisected leather torso, crawls with an infestation of sequins and beads, suspiciously pretty symbols for the body-altering, low-paid labour once common among Korean women. 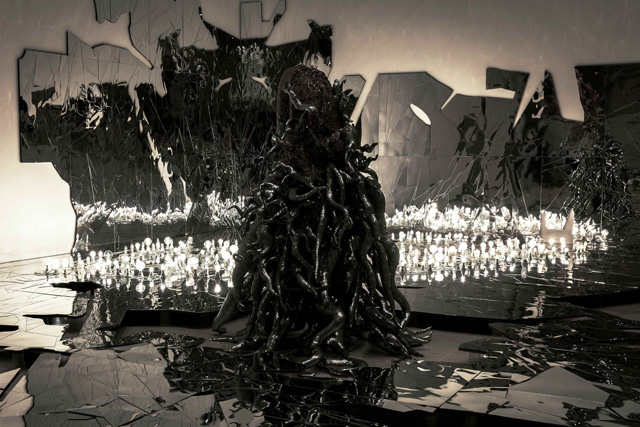 President Park is a recurrent presence at the Hayward. We twice see him miniaturised and naked, hanging from the ceiling. He appears full-size and naked in Thaw (Takagi Masao) (2007) – the subtitle is his pseudonym during training with the Japanese army, for whom he worked suppressing Korean rebels – frozen in a clump of ice, wearing only the pair of sunglasses he wore on the day he seized power in a military coup. A chain of black sequins dangles from the ice, as if he is gradually thawing out, or as if Korea’s animosity towards him is gradually thawing; and indeed, the year Lee created the sculpture, Park’s daughter and apologist, Park Geun-hye, made an unsuccessful first attempt to be nominated for presidential election. Visually stirring, politically suggestive, somewhere between sci-fi nightmare and cartoon, Thaw embodies the best qualities of Lee’s practice.

Park Chung-hee also appears as a spectre. His era was one in which utilitarian planning razed informal low-rise communities in favour of concrete blocks. Looking at Lee’s numerous pieces drawing on imaginative architecture – whether Bruno Taut’s theoretical schemes for garden cities topped with the skyscraper-like Stadtkrone, or the very real Hagia Sophia in Istanbul – one can see an exuberant reaction against the pragmatic, featureless blocks erected during her youth. A display in the exhibition’s laboratory-like second room, on a two-levelled shelf, gathers several of these items in an imaginary plateau, models for a future that was never made manifest. 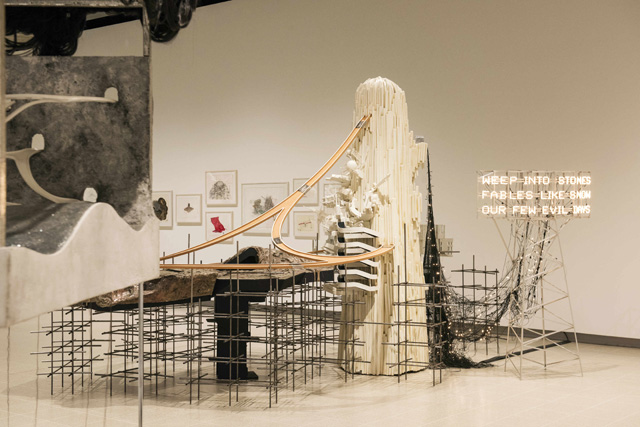 The enormous, visually thrilling Mon grand récit: Weep into stones … (2005) conflates Lee’s own functionalist studio with the imaginary skyscrapers of Hugh Ferriss, and bears a blinking sign with three pieces of text ostensibly taken from the 17th-century writer Sir Thomas Browne: “Weep into stones / fables like snow / our few evil days”. Beyond the first, however, none of these phrases appears as written in Browne’s Hydriotaphia (1658), and the abridgement has the effect of turning the subtleties of Browne’s incomparably baroque prose into vague sentiment.

Such references on references have become a hallmark of Lee’s post-2000 work. Bunker (M Bakhtin) (2007/12), part-named for the philosopher and literary theorist whose concept of grotesque realism – a literary mode in which the abstract is related to the base facts of human existence – corresponds with some of Lee’s approach. The installation that bears his name is a cavern-like booth in which listeners can hear their own words and footsteps distorted to sound like Lee’s imagining of these sounds in different architectural spaces. And each of these spaces, it turns out, is meant to represent a stage in the life of Yi Gu, the architect grandson of the last Emperor of Korea. Although Lee’s installation is sensorially affecting, one wonders what the combination of Bahktin and Yi Gu means; strip it of its referential title, and the work’s tracing of a life through imagined space becomes more palpable.

There is still a lot to enjoy in these works. It is just that, sometimes, Lee adds too many ingredients to the pot, so that the individual flavours are obscured. Her early practice, which struck out at Korea’s conservative, highly unequal gender politics, have a truer charge. Abortion (1989), Lee’s first major work, saw the artist dangled upside down from a ceiling, semi-nude, reading poetry, singing pop songs and trying to express through sound and gesture the pain of her own abortions. It is bracing stuff and must have been even more so in a country that was only just on the cusp of democracy (abortion remains illegal in Korea). A few years later, she flew to Tokyo dressed in a monstrous costume akin to those in her structures and solicited reaction from the people around her and encouraged gallery-goers to blow up a humongous image of herself, barely clothed, in a stylised pose of suggestive compliance. These works, represented in the Hayward by videos, are still potent. 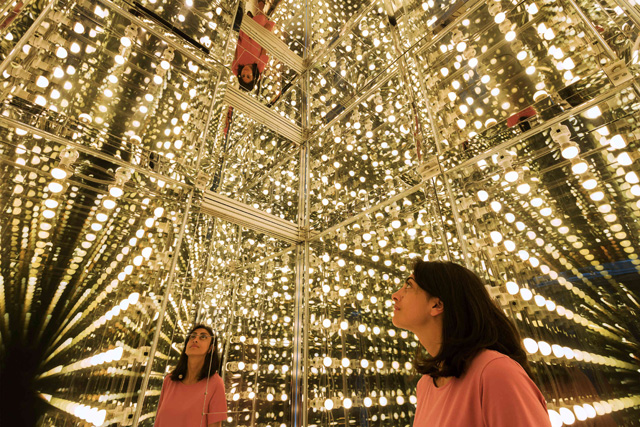 And there is much pleasure to be had in the aesthetic spectacle of Lee’s more recent work. Live Forever (2001) is a sleek retro-futurist karaoke pod for a solitary, one-person performance and, when created, said something prescient about our increasingly solipsistic, screen-bound time. Heaven and Earth (2007) is a bathtub encased in cracked white tiles, fringed by a mountain range and filled with black goo; it represents the misplaced idealism of South Koreans towards their peninsula’s sacred mountains, which, since 1953 have behind the North Korean border. In this mode – clever but clear, devoid of muddle – Lee shines. The exhibition’s climatic work, Via Negativa II (2014), is a maze-like installation in which visitors walk through an illusory labyrinth of infinity mirrors, which distort a clear path into something disorientating and overwhelming. Shard-like echoes of oneself become invisible yet disembodied, somewhere in between real and unreal. Like much of Lee’s best work, it is a place where you want to linger transfixed, but not for too long.