Shigeru Ban has landed an ocean liner of a music venue at Paris’s westernmost edge. With two auditoria and a huge amount of public space, it is hoped the €170m building will enrich the city’s music scene and the fortunes of the formerly industrial island in the Seine on which it sits 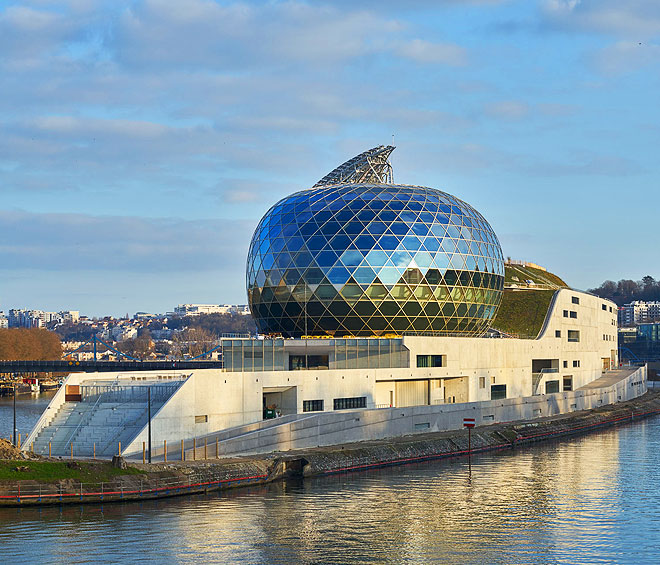 Music for the people is what La Seine Musicale, a statuesque new entertainment venue on Paris’s westernmost border has promised for this somewhat off-the-radar neighbourhood. And a big-hearted, egalitarian building is what Japan’s 2014 Pritzker Prize-winning architect Shigeru Ban has delivered, along with his Paris associate Jean de Gastines.

Architecture is not a game of numbers, but let’s just compare and contrast this building with a much more controversial one: Jean Nouvel’s La Philharmonie, which opened in 2015 on the north-eastern edge of Paris, cost more than €380m – double its original estimate – for a 1,900-seater that will feature an exclusively classical repertoire (arousing angry accusations of elitism), and which Nouvel has now disowned as being “non-compliant” with his original designs.

Here, for €170m, La Seine Musicale offers two venues: one a super- flexible main auditorium, the Grande Seine, that can accommodate between 4,000 and 6,000 people, and whose stage settings and seating can be adapted for anything from rock concerts to ice-skating spectaculars; the other an intimate, 1,150-seat auditorium for acoustic and chamber music. All of this is set within a landscape that welcomes all-comers, from the wide staircase that entices the public up and on to its rooftop walkways and garden to the giant screen that sits outside the southern entrance offering a ringside seat to the ticketless on to the entertainments within.

The realisation of this free exterior entertainment offer is a long-held dream, says Ban: “When I was young I went to Vienna … I was a student at that time and could not afford a ticket to enter the opera. However, thanks to the little screen in front of the opera, I had a chance to see what was going on inside. The idea of the big screen came from here: I thought it would be very nice if people could see what is being played inside the halls of La Seine Musicale, even without buying tickets. On the screen, we are planning to show what is being played either in the auditorium or the Grande Seine. Also, we plan to put football match or movies on the screen. The big screen of La Seine Musicale is the biggest screen in Europe.”

However, the big screen wasn’t up when I first visited this venue, on a windy day in February 2017, two months before its official April opening (launched with great fanfare, and a Bob Dylan concert). As Ban and De Gastines showed a group of, mostly French, journalists around this structurally complete but not quite finished building, the first feature they wanted to demonstrate was the horizontal bifolding door that sits to the right of the south facade. As they hit the remote control button and the giant doors began to lift, Ban explained that this door “will always be open, so that the life of the building is always visible”.

And the life of this building is revealed at the door’s entrance: a huge interior public street that runs the 230m length of La Seine Musicale’s eastern flank; it will remain open all day long. The building is arranged with all the music performance and rehearsal spaces contained within their own discrete block along the left/western flank, to make this possible. Along the eastern edge, this airy promenade of shops and bars can be accessed from either the interior street or from doors placed along its perimeter. On one side of the promenade, large horizontal windows reveal the musicians practising in the interior rehearsal rooms; nothing if not transparent.

With its expansive interior vistas, its accessibility and legibility, the building reminds me most of the Royal Festival Hall in London – arguably London’s most successful and popular cultural venue, with hundreds of people comfortably inhabiting its bars, cafes, spacious verandas and walkways throughout the day and night, regardless of whether they have tickets for any of the delights offered inside its auditoria. I think of it as London’s living room. But can a building so far from Paris’s centre perform the same function?

Perhaps a little context is useful here: the Île Seguin, on which this venue sits, surrounded by the Seine, has quite a cultural legacy. At one time the playground or retreat of churchmen and monarchs, most recently it was home to the French car manufacturer Renault; as the company expanded through the mid-20th century, the island’s factories filled with up to 30,000 workers at its peak, producing 2,000 cars a day. But car manufacturing was increasingly outsourced to cheaper pastures. It closed in 1992, and its industrial buildings were flattened – more is the pity. Jean Nouvel, however, plays a part in this venue’s story, too, as the masterplanner who saw that this island could be reborn as a 21st-century cultural quarter, offering high-quality but accessible entertainment to revitalise a somewhat down-at-heel, blue-collar neighbourhood of high-rise housing, and adding much needed retail and public park space. It was his suggestion that the building should be styled along nautical lines, with a “sail” at its prow, highly visible from the main road bridge into the city; in this way it becomes a landmark for Paris’s western-most entry point.

As to the architecture, it is possible that Ban may have wanted to clad the venue in something a bit more glamorous and reflective than its stolid concrete casing, but budgets wouldn’t stretch that far. However, this great, ocean-liner of a building has a creamy concrete continuity: the same fine-grained poured material is used both inside and out, with a little bit of lustre applied to the interior street’s ceilings – a coat of iridescent paint that shimmers either red or green, according to how the light hits it. The sail is the one truly dramatic gesture. It is made up of two elements: one is a glittering domed housing for the smaller, classical auditorium - a bun-shaped latticework of wood, aluminium and glass – and a genuine  “sail” that envelopes it, made of photovoltaic (PV) panels. These bespoke PV panels are made by Belgian company ISSOL and filled with crystals coloured to complement the shimmer of the surrounding water. The sail rotates a full 180 degrees from east to west, to follow the path of the sun. This feature was Ban’s idea, to meet the client’s requirement that there should be at least 3,000 sq metres of PV panels on the building. In this way, the PVs become a poetic gesture, while also harvesting 80,000 kilowatts of power a year.

It is likely (although Ban declined to comment) that the construction of this elegant auditorium, and the engineering that makes the movement of the 140-tonne sail possible, soaked up the lion’s share of the budget. But it really earns its keep, and not just in topping up the venue’s power supply. Lit from within, the dome and sail become a glittering beacon at night, casting a golden glimmer on to the surrounding concrete. The impressive engineering is exposed as you pass up through the access staircase into the auditorium space. Inside the dome, the auditorium’s curved outer shell gleams with bespoke tiles made by Bisazza, whose red or green iridescence echoes that aforementioned ceiling varnish, evoking scarab beetle casings.

The 1,150 seater auditorium inside is a gorgeous, hand-crafted thing: its seats, upholstered in red plush, incorporate Ban’s trademark cardboard tubes; a motif repeated on the ceiling, which is decorated with a lacework of hexagons and circles that throw mesmerising shadow patterns over the space as the light changes; and its enclosing plywood panel walls are arranged with a rippling acoustic-enhancing wave motif.

This venue is now the home of the Insula Orchestra, named after the part of the brain that transforms feelings into emotions. Led by Laurence Equilbey, the orchestra’s speciality is using period instruments and prioritising music from the likes of Mozart and Schubert – composers of the “Goethe generation” as Equilbey terms it. The acoustic and structure lends the experience a rare intimacy, with terraced seating stacked in balconies around the stage so that the audience feels as close as possible to the musicians. The craftsmanship and comfort indicate that this auditorium is the pinnacle experience – the cultural cherry on the cake.

But what the larger, Grand Seine, auditorium lacks in detailing, it more than makes up for in flexibility. Ban and De Gastines worked with the world-leading Nagata Acoustics on both auditoria, and the larger one has a black-and-grey chequerboard lining of acoustic panels to make the most of its diet of amplified music. Its pale floor and light wood seats conjure a robust simplicity. Retractable seating along the front section, and a hydraulic stage that offers three different stage settings including a floor-level setting, means that - with an orchestra pit that can be covered over - any kind of event can be held here, even “Holiday on Ice” as Ban quipped at the press view. A vast backstage area with state-of-the-art equipment also means that scenery changes for as many as three or four shows a day can be easily accommodated.

As for the rest of the island, it is a case of wait and see. Nouvel’s masterplan placed a line of commercial and leisure units around the exterior of the island, accompanied by a line of greenery. Ban’s masterstroke was to incorporate this retail and greenery into the building itself. He says he liked the idea of “a linear movement – of trees and activity – I wanted to respect his masterplan.”

With the generosity and integrity of this structure, and a diverse programme of concerts and events already lined up for its first year, let’s hope the watery surrounding and the life of the building itself will generate all the required sparkle. 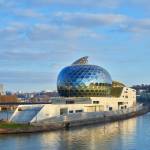 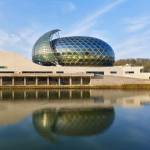 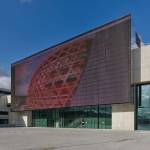 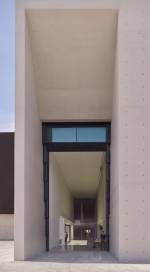 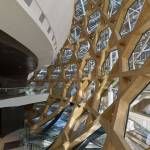 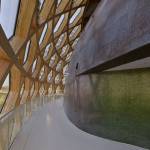 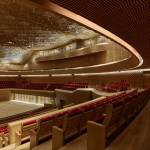 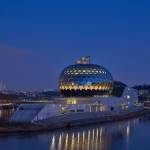 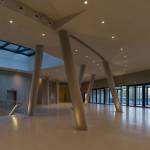 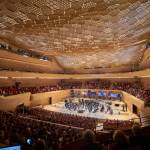 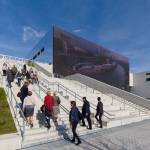 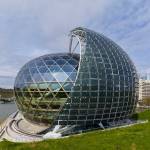 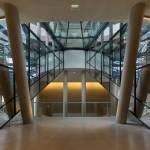