Khvay Samnang uses Cambodian dancers to conjure stories of environmental disaster and recovery, and Amartey Golding combines sculptures woven from human hair and the V&A’s opulent interiors to send a message about humanity’s potential for cruelty and also healing. They add up to a powerful combination 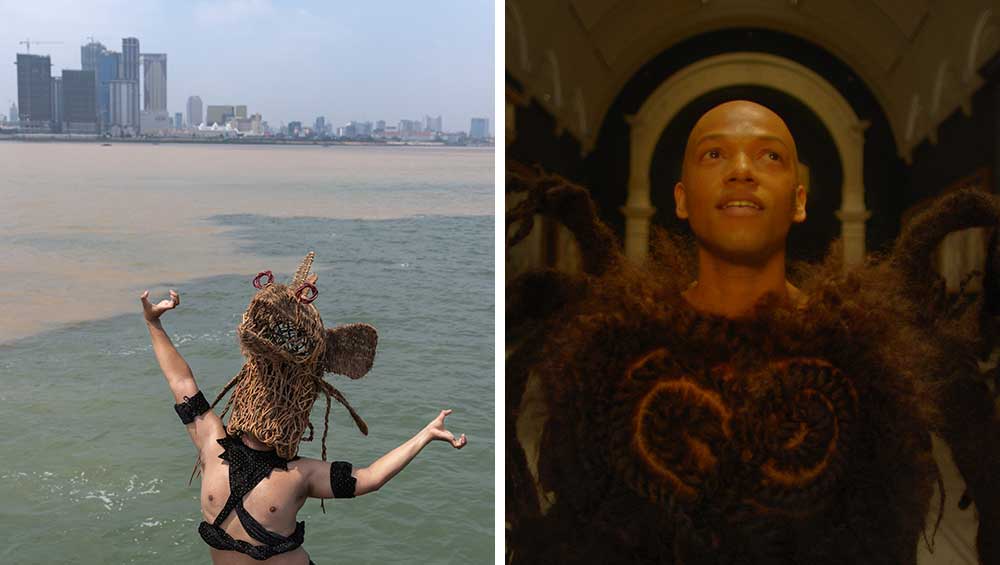 Khvay Samnang (b1982, Svay Rieng, Cambodia) was an inspired choice for this Glasgow Tramway show scheduled to follow the city’s hosting of the controversial UN Climate Change Conference Cop26. A story of environmental disaster and recovery, his film Calling for Rain is aimed at children, but has more than enough charm, weight and character to amuse, and at least momentarily inspire, adults whose faith in world governments will have been seriously challenged by this latest gathering of politicians attempting to address – or in this case failing to address – the most pressing issues of climate change.

Calling for Rain was commissioned by the National Gallery of Singapore for its Children’s Biennale programme, as part of the Singapore Biennale 2021. It uses the lush landscapes of Cambodia and the dancers Samnang often works with – combining indigenous Cambodian with classical Khmer dance techniques – to tell a mythological story of cause and effect. A version of the story of Reamar – Cambodia’s take on the Indian epic poem Ramayana – here Kiri the Monkey falls in love with Kongea the Fish, but they and their community are thrown into jeopardy after the loss of their home in the rainforest. Slowly it emerges that their problems are linked to the behaviours of the Fire Dragon (which here stands for the plundering of nature’s riches for human gain). It is beautifully enacted by a troupe of dancers, wearing woven masks that are also exhibited in the gallery, and the cast completely embody the grace, quirks and characteristics of the animal spirits they are meant to represent. Every movement, every gesture is captivating, from the playfulness and pleasure with which these characters explore their home to their sorrow at its erosion.

There is an explanatory film at the Tramway entrance for young children, but the story is pretty self-evident: scenes of nature’s abundance and splendour progress towards a desolate section where the dancers lie in a dusty, dry field, still and seemingly lifeless, while Kiri the Monkey howls and expresses his grief and puzzlement and the Fire Dragon dances in triumph. But balance is restored, and as that happens, the Tramway’s curatorial addition kicks into life: real water pours down from the ceiling into two shallow pools either side of the screen, as the animals come back to life. It culminates in celebrations with scenes of lush, green rice fields, harvests, people and animals cavorting together, collaborators in this ecological revitalisation. The immersive presentation, and the scale of the screen, adds to the film’s poetic and literal timeless appeal. The quality of authenticity that shines through Samnang’s use of ancient dance forms, rituals and myths to expose modern-day maladies of deforestation, geopolitical inequality and climate change speaks of his long collaboration with the Chong people of southern Cambodia, whose home, the Areng Valley, is one of the last remaining expanses of rainforest in Southeast Asia. The resulting works, infused with the Chong’s unique spiritual ecological worldview, have been exhibited widely and admired, for example, at Documenta 14 (2017) and most recently at the Helsinki Biennial (2021).

As an introduction for children to issues around climate change, I imagine it will spark engaging workshops and conversations; the show has already proved a major attraction for Glasgow families and youngsters, drawn to this immersive space, the bean bags arranged in front of the huge screen, and with large stills from the film displayed on the walls behind the screening area.

Opening two weeks after Khvay Samnang’s film, an equally powerful and poetically profound meditation on man’s inhumanity to animal and man emerged in the two-screen presentation of Amartey Golding’s Bring Me to Heal (2021) in the exhibition space next door. As a narrative, this is very much an adult affair, though it is easy to sink into a state of childlike wonder listening to the voice of the storyteller, whose fire-lit face on the left-hand screen dominated as I walked in. 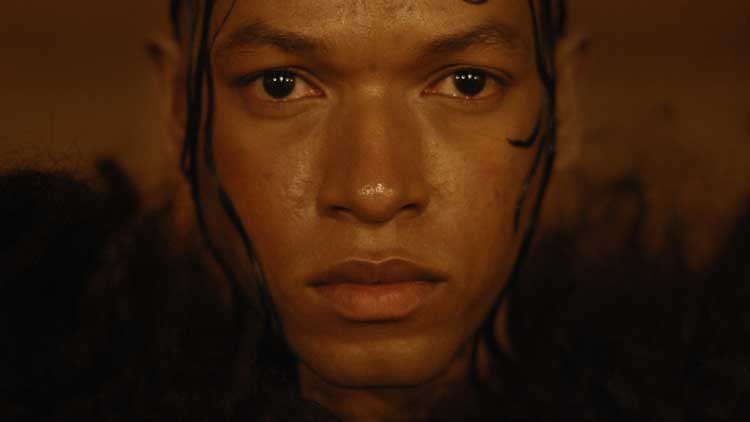 With quiet grace and gravitas, the storyteller weaves a fable for our times. A white horse gallops along madly, while a goose, entangled in its mane, keeps suggesting it is time to stop, but the horse keeps running until first its hooves fall off, then its legs and then its body, until it is just a horse’s head lying on the ground. The goose then cares for the horse, which realises it has been running purely out of fear of being outrun, and slowly the horse regrows its body and its limbs. It is clearly a story about losing touch with our animal nature - or trying to regain that sense of living in balance with nature. It is beautifully told and filmed with great simplicity: the flames of the bonfire, the faces of the storyteller and his audience staring into the fire, some closeups of twigs and gnarled branches and the extraordinary sculpture of an elaborate garment made from hand-knotted human hair, silhouetted against the flames. The sculpture itself is displayed in the area behind the screen: an ornate and witchy confection created by Golding in collaboration with the hair artist Kevin Fortune. It blends references to afro hairstyles with the body art of ancient Britons, meshing Golding’s own identity as someone of Anglo-Scottish and Ghanaian ancestry. The creation of this costume is also symbolic of care with the hair of potentially thousands of people being hand-knotted by many into this extraordinary sculptural garment, in the name of collective healing. 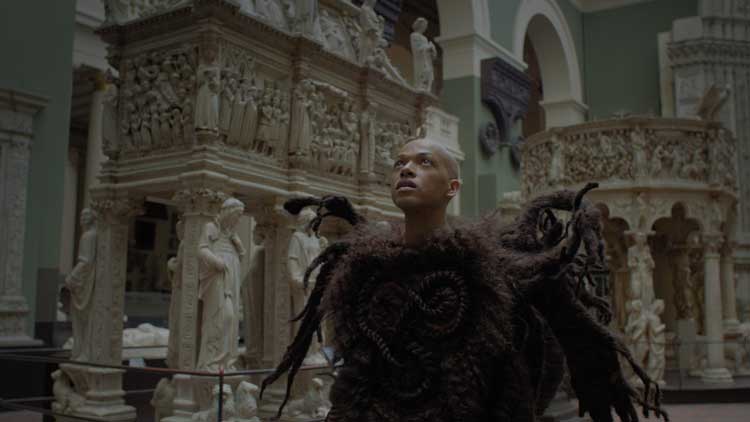 The garment emerges in the second film on the right-hand screen that follows our fireside story session, and this time it is worn by Golding’s brother, Solomon Golding – a dancer with the most exquisite and mobile of faces – who proceeds, clad only in the hair garment, through the art-festooned halls of the V&A Museum in London, accompanied by a surreal soundtrack - a low, lilting reggae number, its singer’s voice slowed down to the point of seeming inebriation.

Over the sloshing rhythm and growling vocals, the angelic-faced young man strolls through scenery of ancient artworks – so many chaste, white marble virgins, angels and cherubs, eyes raised heavenwards as are those of the wondering, wandering, hair-suited man, expressing amazement as he progresses through the Cast Courts, past the copy of Michelangelo’s David. Magnificent creatures of mythic form and proportion are presented in abundance – all white, in stark contrast to this hair-suited man of brown. But as he pauses in front of the glowing, golden altarpiece at the end of the Raphael Court, the camera zooms in to the stories contained within it, of wretches, satyrs and scenes of hell – evisceration, crucifixion – at which point the man’s expression shifts into one of horror, until tears course down his cheeks. It is such a powerful moment - not so much about the whiteness of everyone he sees, but man’s inhumanity to man, regardless of colour. Stunning.