Across 11 portrait canvases and one enormous fabric hanging, Grosse’s complex, multilayered works appear as seemingly prehistoric scrawls, imbued with vital energy in a maelstrom of colours 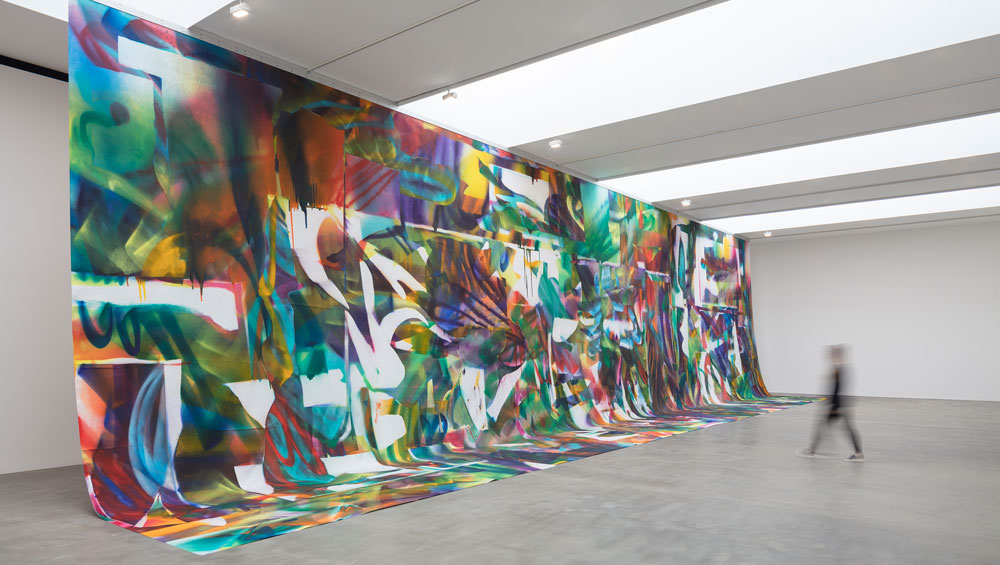 Katharina Grosse (b1961, Freiburg, Germany) loves to paint, and isn’t too picky about where it lands. She is well-known for her headline-grabbing, site-specific installations, which have in recent years included painting a condemned building on New York’s Fort Tilden beach bright Martian red, transforming a Sydney warehouse into a walk-in sculpture of polychromatic fabrics, and filling entire galleries with mounds of candy-coloured soil. Grosse’s practice is an intoxicatingly maximalist cocktail of abstract expressionist bombast, psychedelic visuals and land art scales, compressed, canistered and shot through the barrel of a spray-paint gun at a hundred miles an hour.

Prototypes of Imagination is Grosse’s first major gallery exhibition in London, following This Drove My Mother Up the Wall, her well-received installation at South London Gallery in 2017, which saw her embellish the gallery’s walls and Victorian cornices and pediments with her characteristic swirls of colour. On show are 11 portrait canvases and one enormous fabric hanging, which, at more than 20 metres, runs the length of Britannia Street’s main gallery: those familiar with Grosse’s work might be disappointed at the exhibition’s relative lack of site-specific outlandishness, but there are plenty of colourful pyrotechnics to be witnessed on the canvas. 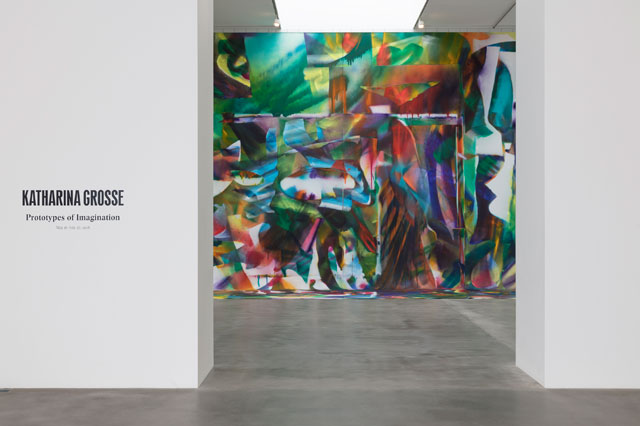 As you enter the atrium, only part of the cloth hanging is visible, the approach gradually yielding more and more detail until the full scale of the richly coloured surface dominates your field of view. The picture is a dense, abstract jumble of gestures and washes of ripe, dizzying colour, with layers of detail colliding and combining to beget yet more colours. The fabric extends down to the floor and then rolls out across the gallery floor, echoing the contours of the gallery space itself. The eye wanders, not knowing where to look first, and it would seem this is part of the point – this is painting without linear structure or narrative. 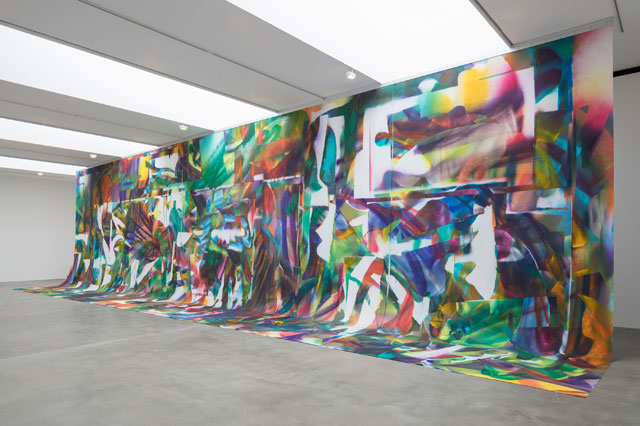 Once the viewer has had a chance to acclimatise to the hectic maelstrom of scarlet, puce and aquamarine, the eye begins its work of picking up threads of shapes and patterns from the abstraction. From one angle, a thick, zigzag fog of teal resembles a storm front advancing; elsewhere, the strange, interlocking geometric forms take on an almost cubist aesthetic. In both Grosse’s large-scale works and smaller canvases, structure and order are very much present if you look closely enough, even if they are not forthcoming on first glance. Each canvas has as a base form a simple shape, often highly abstract, like a child’s drawing or absent-minded scrawl on a piece of paper. It would appear Grosse has taken these “doodles” as a starting position, forming a stencil on which to layer her colour-saturated spray-paint gestures. On large scales and imbued with such furious energy, they come to take on a primitivistic quality, as if gesturing to a time when painting wasn’t quite so polite. 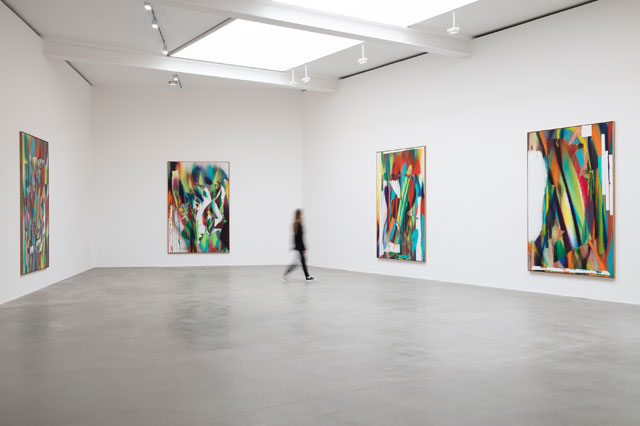 Next to the enormous, mural-sized fabric hanging, Grosse’s canvases are like smaller windows into the same ethereal world. The same fruity, lush colour palette abounds, and within each picture the same complex, irregular lattices of angular shapes interact and overlap, refracting the aggressive swoops of spray paint into seemingly endless permutations. 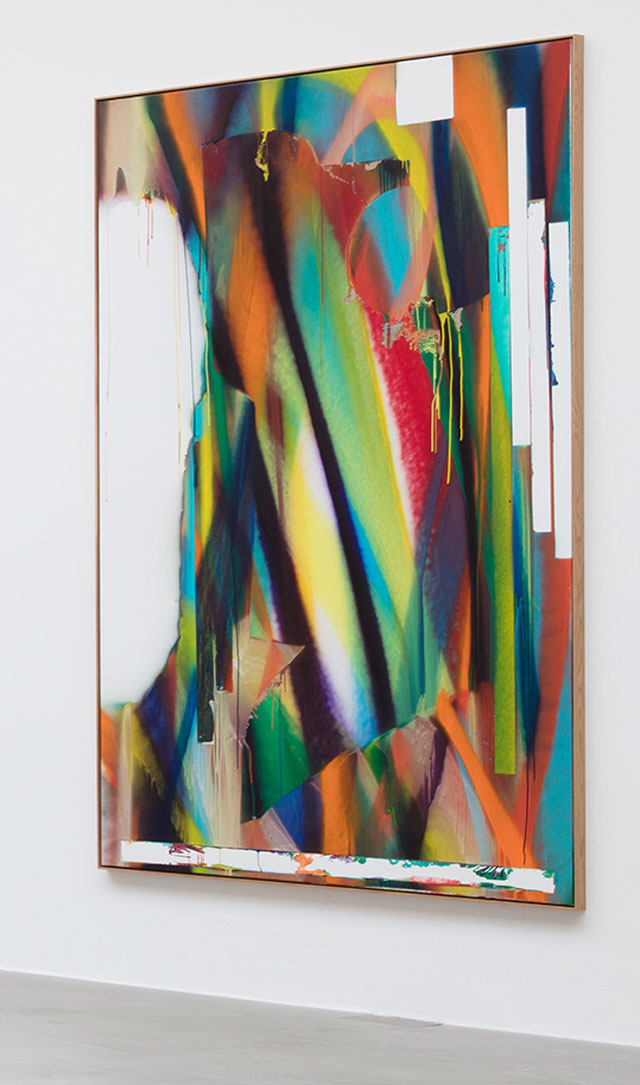 The paintings reward close observation: the airy atmospherics of paint in the canvases’ outer reaches condense into dense rivulets, in compositions that are reminiscent of Pat Steir’s waterfall paintings. At the junctures where the layers meet, the paint seems to have curdled under its strange entropy, appearing heat-damaged and pixelated. 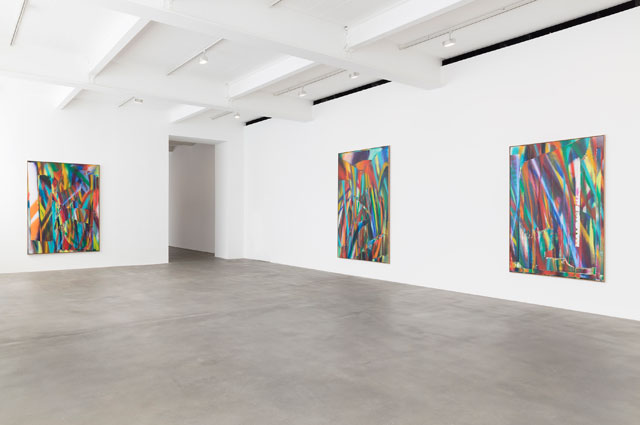 Often the elements that stand out most are spaces that have been left purposefully devoid of pigment. Empty white spaces are a common feature in almost every painting, sometimes appearing as an isolated desert in a sweeping ocean of colour, contorted into unlikely shapes, while other works are framed by whiteness, or else interrupted by mysterious white rectangles, obelisks of symbolic potential. In one section of the large-scale fabric work, white space punches through dense layers of smokey navy in shapes that evoke a jigsaw puzzle, as if teasing or challenging the viewer to piece together a coherent visual picture from the jumbled fragments. At the heart of these pictures is this tension between rapid, unmediated expression and the potential for more complex and constructed meanings. Grosse has pointed out that, for her, part of the attraction of spray paint is that it allows her to paint more quickly than other mediums, such that the spray can comes to function as an extension of her own body, enabling her to express her visual ideas without cumbersome intermediation. And yet these are complex, multilayered works that evidently necessitate no small amount of planning and expert execution. It takes a lot of forethought to make something look so spontaneous. 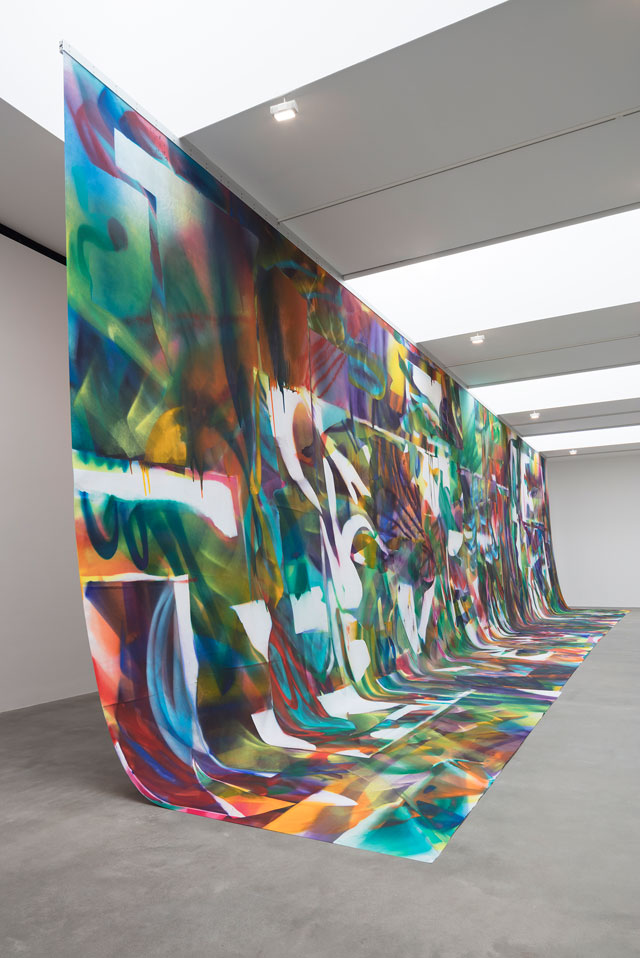 Standing back and taking it all in, it is hard not to absorb the frenetic pace, the sense of unfiltered, effervescent possibility that these paintings inspire. Rejecting conventions of visual storytelling or pictorial structure, what we are left with are these seemingly prehistoric scrawls, imbued with vital energy and basking in the heat of irradiated rainbows. There is real ingenuity and virtuosity in the execution of these works, made up as they are of complex overlapping stencils and cut-outs that bring dense microcosmic vistas of colour into contact. Grosse’s is a world crackling with ideas on the potential of colour as a pure mode of creative expression, disintermediated by line, form, shape or narrative. If these are Grosse’s prototypes, we can look forward to what comes next. 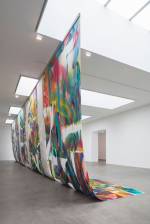