Women and plant forms are intertwined among primal patterns and symbolism in Ishag’s seductive, vivid and otherworldly art 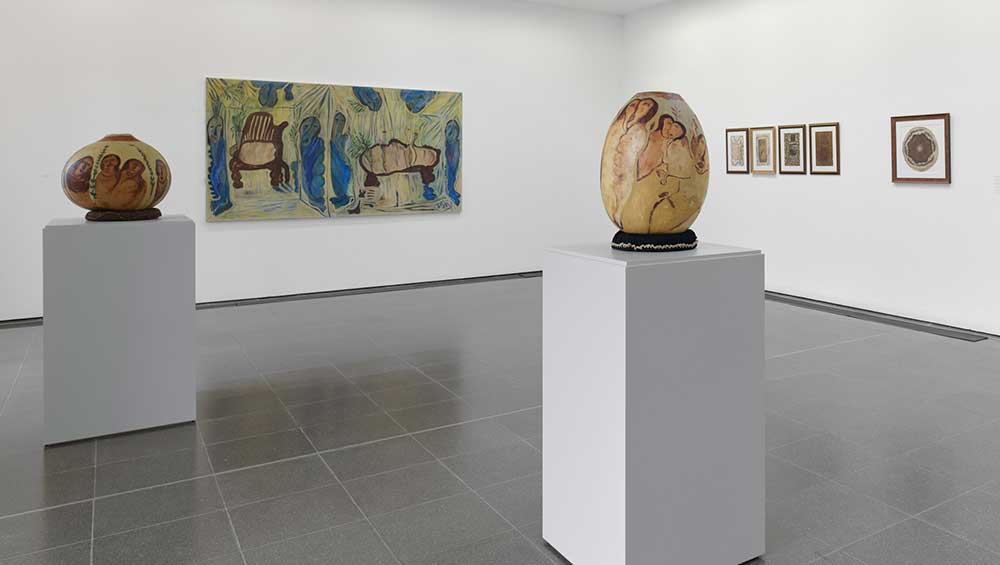 Kamala Ibrahim Ishag (b1939, Omdurman) paints liminal worlds, spirit worlds, scenes at once alien and familiar. Ancient and foreign and yet universal, her imagery seems to draw on a variety of much older art forms – I see echoes of cave paintings, Australian Aboriginal dreamscapes, batiks. She fills her primal patterns with humans and plants to generate powerful atmospheres in her own universal language.

It turns out, she is indeed inspired by ancient art forms – though specifically ones from her own Sudanese culture, including that of Zar ceremonies and Kerma, Kushite and Meroitic symbolism, as well as from other Nubian civilisations and mythologies, as well as Christian and Islamic art. 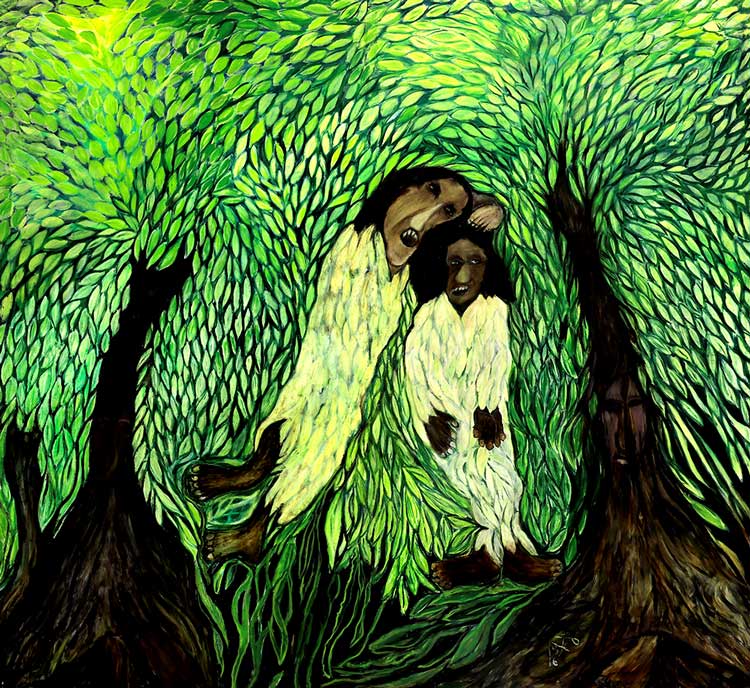 However, counter to the prevailing culture in which she lives, women are foregrounded in her stories. There are even two Eves in her origin story, in the 2016 painting Two Women (Eve and Eve), though the message is hardly one of Utopian sisterhood. It looks as if the taller Eve is about to devour the smaller one, as she crouches over her with her fangs bared. But surrounding them is a bower of gorgeously green leaves, in a composition that pulsates with life – the tree trunks themselves are given faces as if to reinforce that vitality.

Nearby, a 2019 painting, Bait Al-Mal, offers a very different kind of treescape, more barren and drought-afflicted. Its central area appears to dive below the bare earth to reveal a tangle of brown roots, each cluster leading to bundled brown bodies, like swaddled babies. This painting is apparently Ishag’s way of mapping her childhood memories and depicting the connections between her family and those she grew up among, in the Khartoum neighbourhood of Bait Al-Mal. 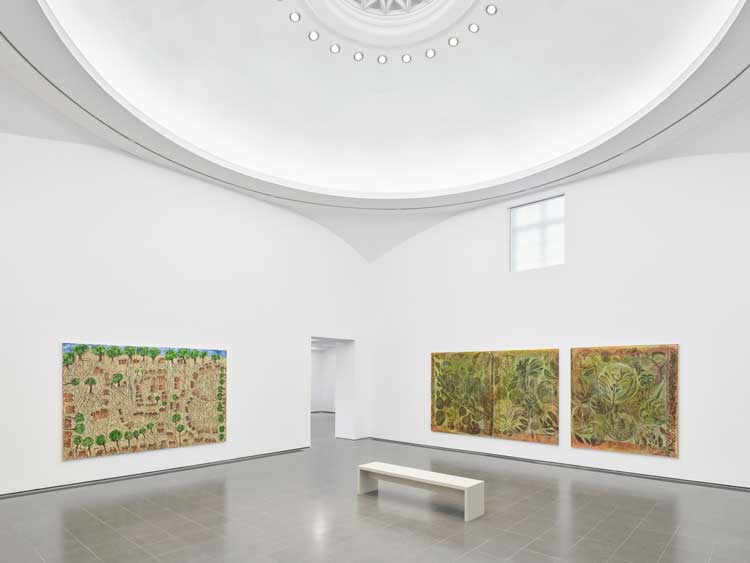 These two paintings each occupy a whole wall in the Serpentine’s most atmospheric, central gallery - its circular ceiling-elements reinforcing links with sacred space. On an adjacent wall two earlier works, My Plant 1 and My Plant 2, both from 1998, sit side by side, like leafy still-lives. The plants, fronds, stems, leaves and flowers appear encircled by bubbles and yet the colouration is distinctly paler - soft greens, yellows, sepia - as if these plump specimens are simultaneously alive and dying.

A final painting in this central section is the most recent: Blues for the Martyrs (2022), a multitude of faces captured in floating bubbles against a watery blue background. It was painted in tribute to the more than 100 people killed at a peaceful sit-in on 3 June 2019, in Khartoum (which became known as the Khartoum Massacre). Young men and women were forcibly taken from the protest, brutalised and then drowned in a river. The presence of these fronds – which I had taken for seaweed – is meant to symbolise how their bodies will be woven into the infinite and ongoing flow of life. 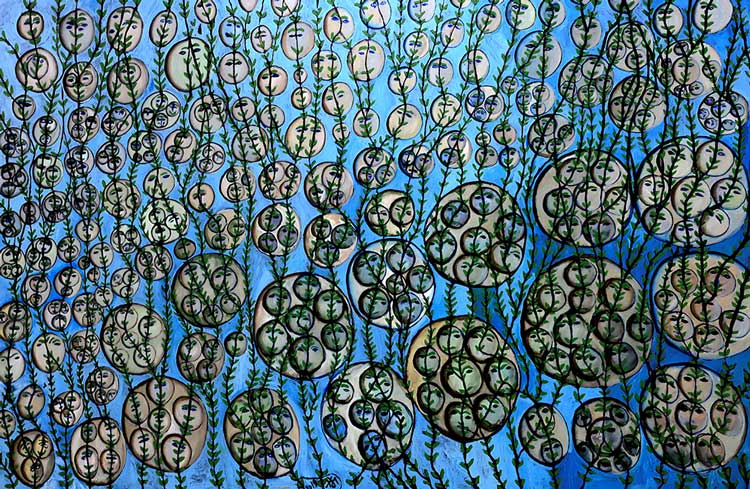 Though this is her first retrospective in the UK, Ishag is a hugely influential painter and teacher. She was one of the first women to graduate from the College of Fine and Applied Art in Khartoum, in 1963 (later returning to teach there and eventually becoming its dean). She was also a leading figure in the Crystalist Group which emerged in Sudan during the 1970s and 80s with the aim of establishing a postmodern style, in opposition to the Khartoum School’s male-dominated view centred around identity politics. Their manifesto, to which she contributed, called for a new aesthetic modelled on diversity, transparency and existentialist theory. The universe, they claimed, is a crystal cube, transparent but infinitely changeable, according to the viewer’s perspective. 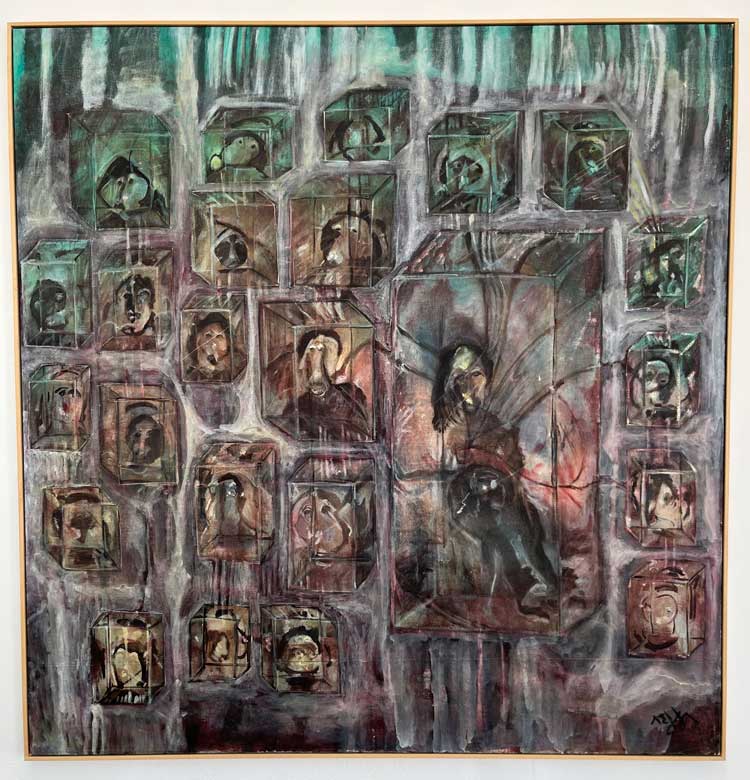 That Crystalist perspective appears in frequent depictions of people - mostly women – with their faces reflected or trapped in crystalline cubes, oblongs and spheres – for example in Faces in Glass Cubes (1998) and Portraits (1973). I am not sure – and the lack of captions or explanatory text leaves us guessing - whether this is intended to evoke the degree to which Sudanese women’s lives are constrained, their bodies confined, rendered invisible, or whether it relates to one of the Sudanese Zar healing ceremonies to which her work often refers. Either way, her work is typified by a numinous spirituality; a quality she apparently absorbed and adopted after encountering the visionary work of William Blake while a student at the Royal College of Art (1964-66). During that London stay, she also encountered and was inspired by Francis Bacon – an influence I feel appears most powerfully in a nearby work from 1987, Loneliness. In it, we see the howling face of a bereft and isolated woman, her body pink and red and raw, as if stripped of its vital, protective, outer layer of skin. The room around her is grey and cell-like, the elaborate table behind her – one surely acquired for impressing “company” – mocking her solitary state.

Over the decades in which Ishag has worked and taught, her style has shifted and evolved. However, there is a clear stylistic link between the haunting portrait Girls, of 1962, and Two Women (Eve and Eve) of 2016. All her experiments and evolutions are represented here, from a group of 1960s drawings to new paintings created in her studio in Khartoum this year. We have works on canvas, on paper, on calabashes, screens and leather drums. There is even some of her graphic design material displayed in showcases. My one criticism of the hang is that we are left to float around the Serpentine spaces as freely and directionless as some of her subjects, peering at the briefest of captions (printed on paper) so small and faint as to be almost invisible. Draw your own conclusions, seems to be the message. 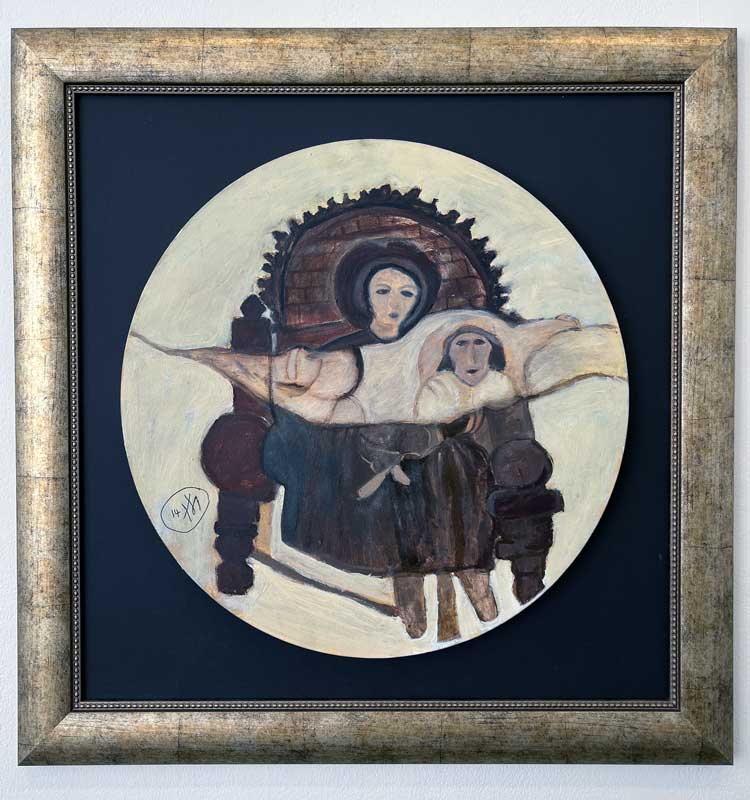 Though her dedication to women’s experiences is palpable, and the presence of suffering and oppression unavoidable, there is also joy, in her Peacock Woman (2015), her Lady Grown in a Tree (2017) and Two Figures in Two Balls (2016) and even a weirdly wholesome pieta - La Pietà (2014), in which a plump, healthy-looking Jesus is cradled on his mother’s lap, his expression alert and perky as if posing for the portrait.

Most of these works are less like portraits and more like visions, which perhaps tells us why – along with their female subject matter – we have waited so long to see her work recognised in a major UK institution. But her skill at drawing us into these seductive, eerie, vividly beautiful, hugely personal and disconcerting worlds, is soundly deserving of celebration. 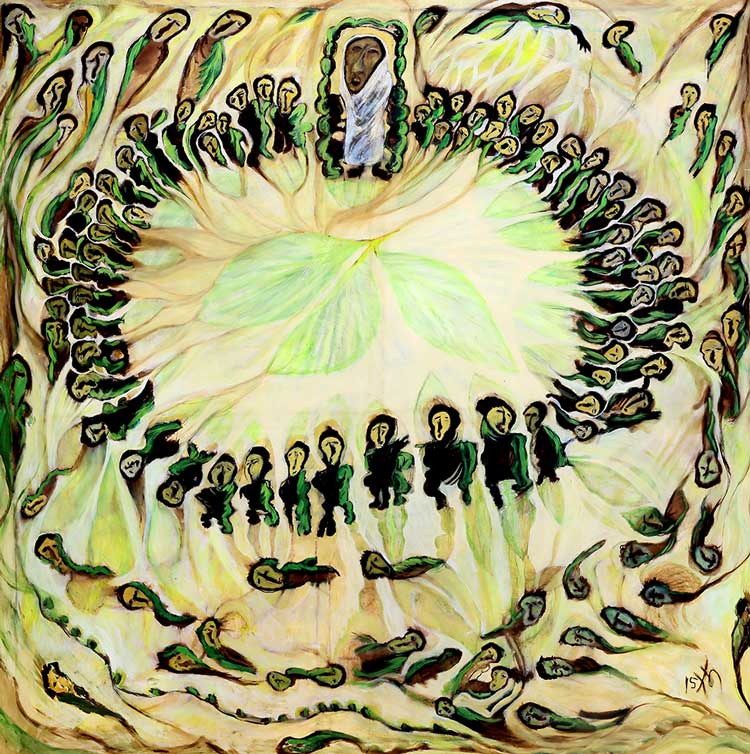