Julien Creuzet: Too blue, too deep, too dark we sank …

Julien Creuzet: Too blue, too deep, too dark we sank …

Sculpture, film and music blend in the French-Caribbean artist’s striking exploration of the legacy of colonialism on African cultural heritage 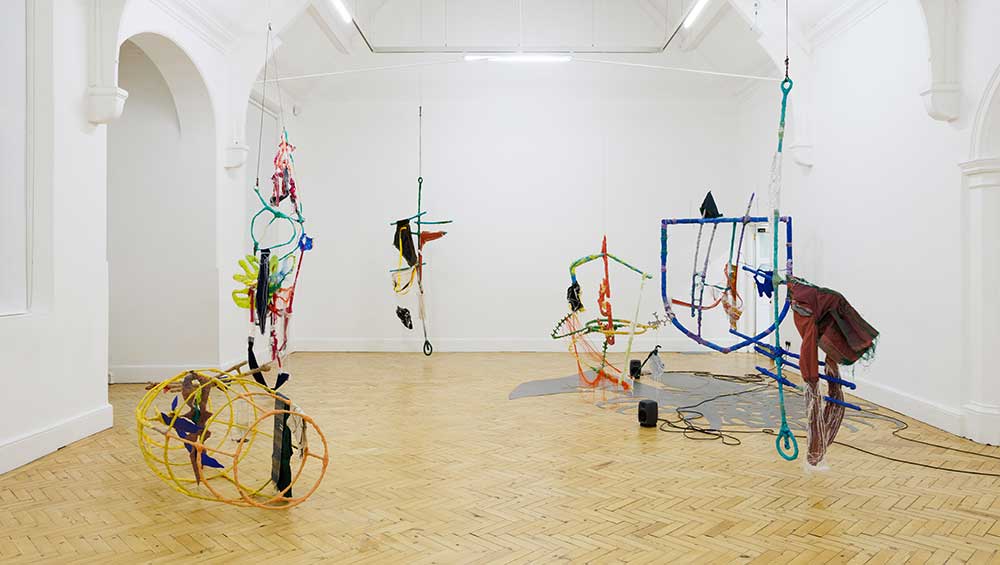 In his first institutional exhibition in the UK, Julien Creuzet, a recipient of Camden Art Centre’s Emerging Artist Prize at Frieze, presents a powerful assemblage of found objects, music and film that interrogate the history of colonialism in the Caribbean and its modern-day legacy.

Suspended mid-air in the space of the centre’s beautifully lit Gallery 3 are several sculptures created from entanglements of nets, ropes, cords, wires and plastic bags, wound into flowing shapes and connecting with one another spatially as if thrown ashore by the same wave. Repurposing detritus washed up on the shore, as well as objects given to him by other artists, these new sculptural works by the French-Caribbean artist speak of being lost, being found, and the process of searching and finding. They are about being left and then left seeking – and in doing so, exploring elemental forces alongside human agency, subjugation, imagination and liberation, and the movement between them all in the evolution of identity. 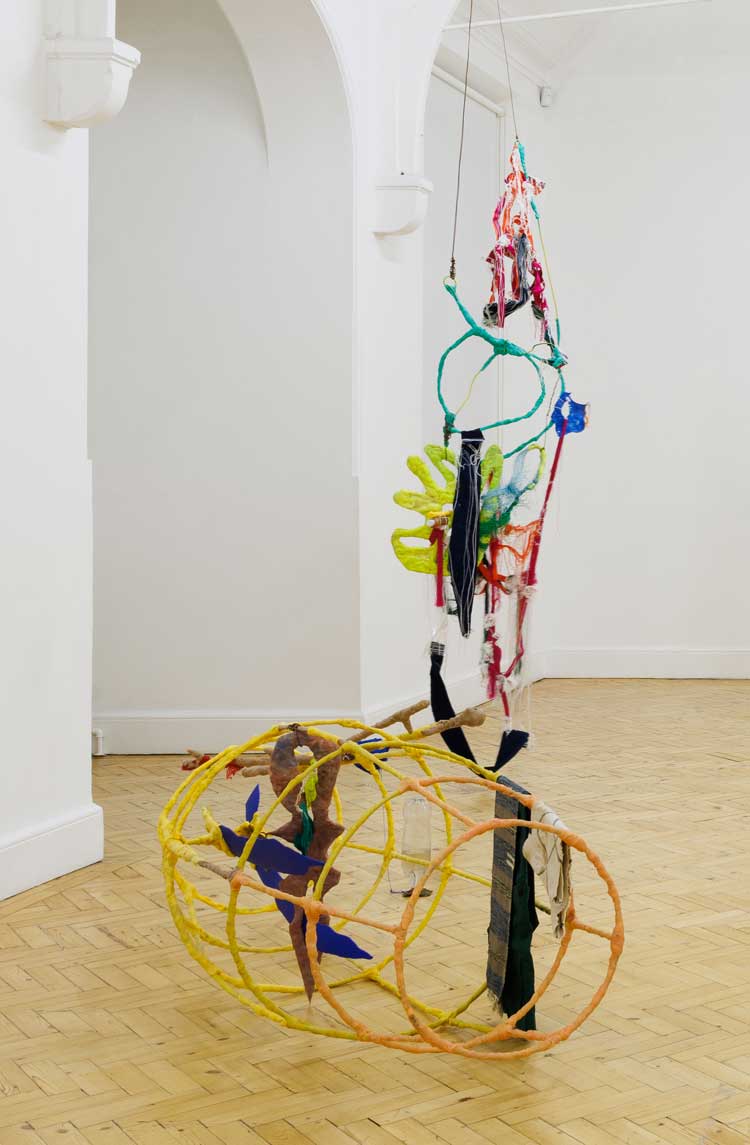 Born in 1986 in a Parisian banlieue, Creuzet grew up on the Caribbean island of Martinique, before returning to France to attend the School of Fine Arts in the Normandy port of Caen. He went on to do postgraduate studies at Lyon Academy and the Fresnoy-Studio National des Arts Contemporains. A few years later, he was given a solo show at the Palais de Tokyo in Paris. He has since achieved many accolades, exhibiting at the Pompidou and Manifesta 13, Marseilles. His work is influenced by the political ideas of Aimé Césaire, who was part of the liberation movement of Martinique, and along with Édouard Glissant, Léopold Sédar Senghor and Léon Damas, began the literary movement Negritude as a protest against French colonial rule and its damaging legacies, and with the aim of reclaiming the value of blackness and African culture.

Creuzet’s own experience is the crucial foundation of his work, in which he hopes to reveal the difficult social realities of life in Martinique and of the Caribbean diaspora more widely, interrogating the complex relationships between Caribbean histories and legacies as well as Europe and its long colonial past. Marked by a truly collaborative and social vision, Creuzet’s art, here as in his past shows, brings together many artistic influences, stories, ideas and other people to create an invigorating and powerful vision of affirmation and liberation. 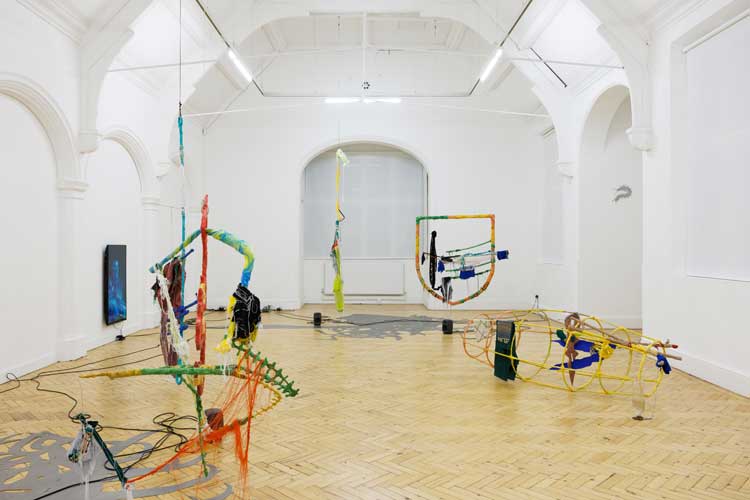 Creuzet’s new animated film, presented as part of the show, is especially moving, featuring a character composed of smartphones, cigarettes and bananas, dancing the bèlè, a traditional style of creole folk dancing that has evolved in Creuzet’s birthplace, Martinique, which he has described as “the heart of my imagination”. Originating, in part, from Western African fertility rites, this dance developed in Martinique (and relatedly, on other Caribbean islands such as Guadeloupe, Haiti and Tobago) as a response to times of colonisation, slavery, mourning, resistance, and ultimately, liberation. Often performed at full moon and sometimes at funeral wakes, it has evolved into a performance of solidarity, spirit and identity, formed through the expressions of mourning, struggle and hope, and sustained through the powerful links of familial and communal tradition.

With its motifs of smartphones, bananas and cigarettes, the film further comments, more broadly, on the digital and pop cultural interconnectedness of the contemporary African diaspora, influenced inherently by business and globalisation, juxtaposed with the unifying influence and role of traditional dance, music, art, philosophy and literature. It also opens a dialogue with the gallery itself, working with the main, sculptural installations to present an immersive vision of shifting identities and ways of life, which can claim the currents of the past and their evolving, emotive rituals, in a way that is defiant, entrancing and hopeful. 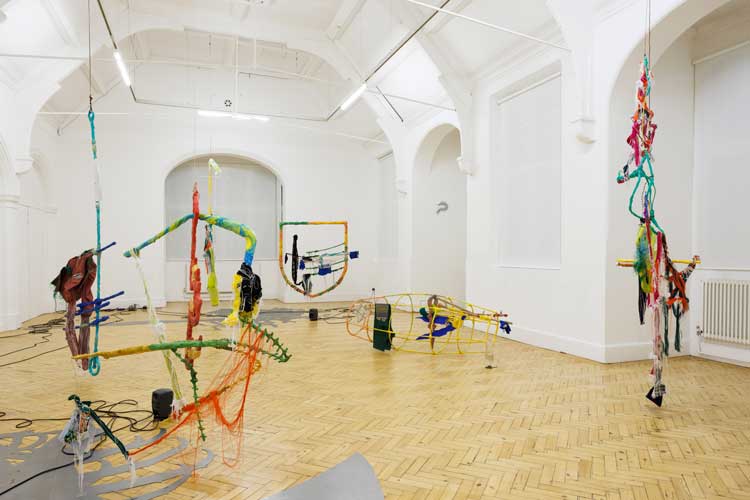 These hanging sculptural installations also interact with the gallery space itself, interrupting its glacial, even sterile, whiteness with striking eruptions of colour and energy, combining the seeming “detritus” of plastic and wire, as well as floor-based sculptures, made of laser-cut metal sheets that can be walked on, which incorporate the motifs (including animals and plant life) of the flags of Caribbean countries that became independent following centuries of colonial rule. The sun that shines through the windows makes these metal floor installations glow.

Music also flows through the space, with a soundscape created in collaboration with the London-based singer-songwriter Anaiis (who also draws on her French-Senegalese heritage and global travels), acknowledging the influence of the Caribbean diaspora on British culture and beyond, and the ever-moving interconnections brought about through migration, travel and art. This music works alongside the sculptural works as if a breeze moving the invisible waves over which these found objects are brought to the shore in an ebb and flow.

In this way, Creuzet’s art also recalls the recent work of the Barbadian-Scottish artist Alberta Whittle, who explores her heritage and the legacy of Scottish involvement in the British empire through installation, sculpture, written work and moving image. Creuzet, too, creates an integrated and powerful vision of homage, recollection and political idealism. The inclusion of objects given to him by artists he has known underlines this sense of camaraderie and a broader social and political movement of which he is part – art as a form of liberation and connection, of “creolisation” and imagination, where the art exhibition itself provides a space for profound change and interconnection.