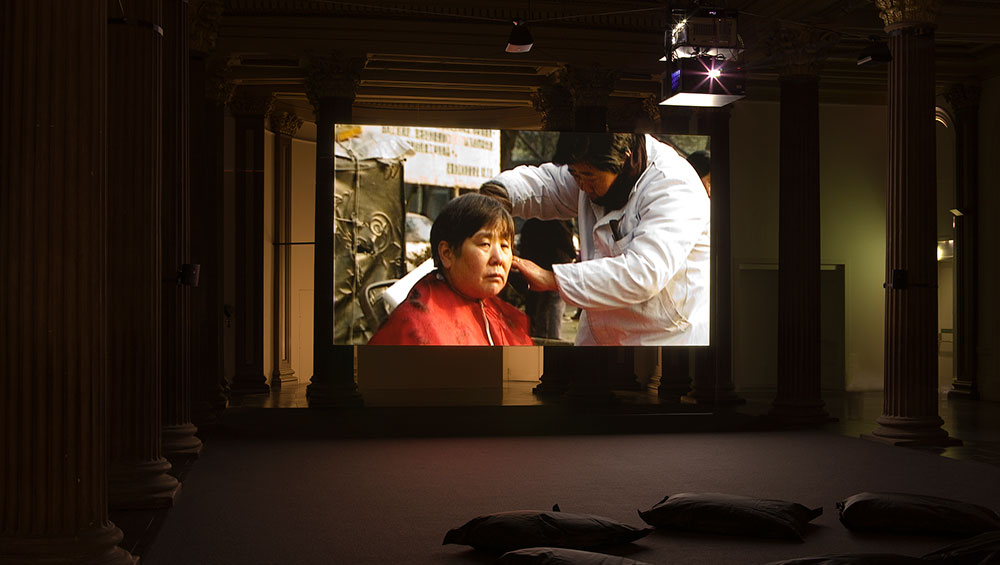 Glasgow, like so many cities in the UK, was built on the foundations of colonialism and, in particular, the trade links with India and China through the East India Company in the 1800s. Glaswegian merchants travelled to Asia to do business, often exploitatively, and brought back popular imports: tobacco, cotton, tea and spices. The construction of ships to transport these imports was a major industry in itself, and reliant on the orientalist relationship between Glasgow (and the UK more widely) and cities in Asia.

While this formal type of colonialism has now ended, its legacy remains. Fiona Tan’s video installation Disorient confronts these complex issues, and specifically the ways in which the west perceives the east as exotic and desirable, albeit in a commodified, fetishised – and therefore inferior – way. It was created a decade ago for the Dutch pavilion at the 53rd Venice Biennale, based on the mythology surrounding one of Venice’s most famous merchants, Marco Polo, as well as that city’s significant trade history. Acquired in 2010 by Glasgow Museums, Disorient has come back to the city for this exhibition. As the UK’s current political turmoil brings up issues not only of immigration (as considered in extremely xenophobic terms), but also the notion of the British empire and related ideas about superiority, self-righteousness and exploitation, this screening is certainly prescient. 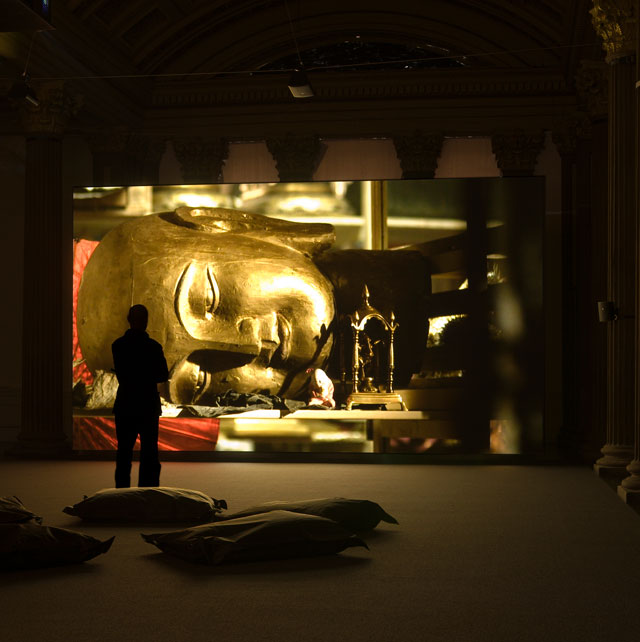 The main gallery at Glasgow’s Gallery of Modern Art (GoMA), aptly the former Royal Exchange Hall,  is shrouded in darkness, with two large screens on either side of the room. On one side, there is footage of various places in Asia and the Middle East, collaged together with a voiceover that reads from The Travels of Marco Polo. The voice is low, however, and hard to hear alongside the background noise of the footage itself, so the soundtrack is almost subliminal and the focus is on the film’s visual content. This contains a lot of travelling – people driving or cycling along busy, polluted roads, or carrying heavy objects through streets.

It also shows military campaigns – the bombing of anonymous cities, which become scenes of little more than rubble and dust. Sometimes, figures look at the camera itself, disarming the viewer, and bringing doubt to any sense of detachment that the previous busy scenes may have encouraged. The footage subtly shows a modern kind of colonialism or imperialism at play, through this juxtaposition of everyday life and violence from above, a gradual, implicit dehumanisation through warfare. 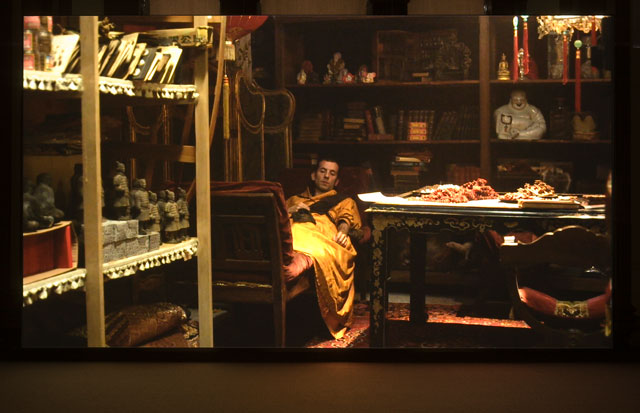 The voiceover, quoting Marco Polo’s tales of adventure and conquest, is uncomfortable – particularly as it is read in such a deadpan, muffled way. The film undermines, and subverts, the giddy excitement at colonialist exploration, through plainly representing these contradictions. Even the nature of filming itself, exposed through the succession of direct eye contact with the subjects of the film, mirrors the traditional, problematic representation of the orient through the western gaze. We begin to feel complicit in this relationship, simply by watching the film. The orientalist perception is thrown into doubt and confronted, as is every individual’s part in that behaviour.

On the opposite side of the room, facing this video, another screen shows a darkened room filled with ornaments, fabrics, trinkets, incense, spices, lanterns and even exotic animals – the covetable objects that were imported from Asian cities and are still associated with them. The background is an opulent dark red, and the camera slowly pans over these treasures, as if filming an Aladdin’s cave, recollecting not only the objects associated with colonialism, but also the cultural history that glamorised it. Despite the luscious colours and textures of the display, there is an eeriness to this still life – perhaps the lack of people, or simply a heaviness derived from the symbolism that is so clear here. 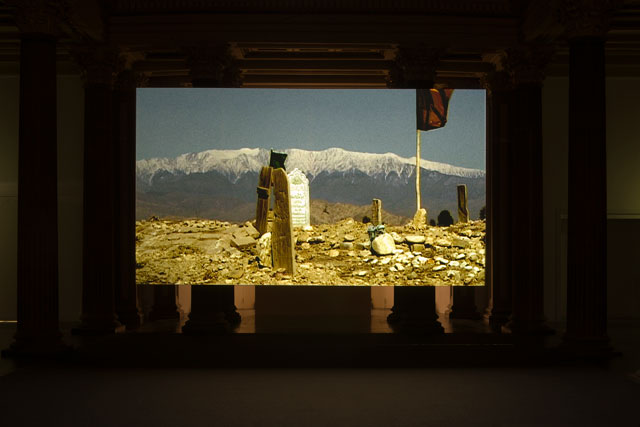 In her work, Tan considers the historical legacies of colonialism and, in doing so, she also provides a commentary on modern colonialist relationships. As Moustafa Bayoumi, the author of How Does It Feel to Be a Problem?, wrote: “It is almost facile to point out that orientalism, like imperialism, never seems to go out of style. In fact, in the age of terror, it has re-emerged with a vengeance.”1 By presenting images of modern imperialist wars fought on Asian and Middle Eastern soil, next to images of “exotic” material items typically imported from those countries, Tan lays out the exploitative relationships that still exist in some form today.

In Edward Said’s seminal 1978 work Orientalism, he discusses the phenomenon of that name, rooted in distinctions between the constructed collective identities of the west (or occident) and the east (or orient). He defined orientalism as a form of discourse that involved “a will or intention to understand” the non-European “other”, and often a tendency “to control and manipulate what was manifestly different”. He argued that orientalism worked alongside imperialism, giving authority to the colonial powers in Europe through the subordination of those colonised countries and people. Cultural imperialism worked in tandem with geographical imperialism, therefore. In this context, Tan seeks to disrupt these cultural assumptions and often a denial about the role of representation and perception in broader political realities. She lays out the modern orientalist perception of people and places with which we have a long and complex relationship, and places it next to footage that shows the artificial nature of these ideas and the everyday reality from which is it so detached. 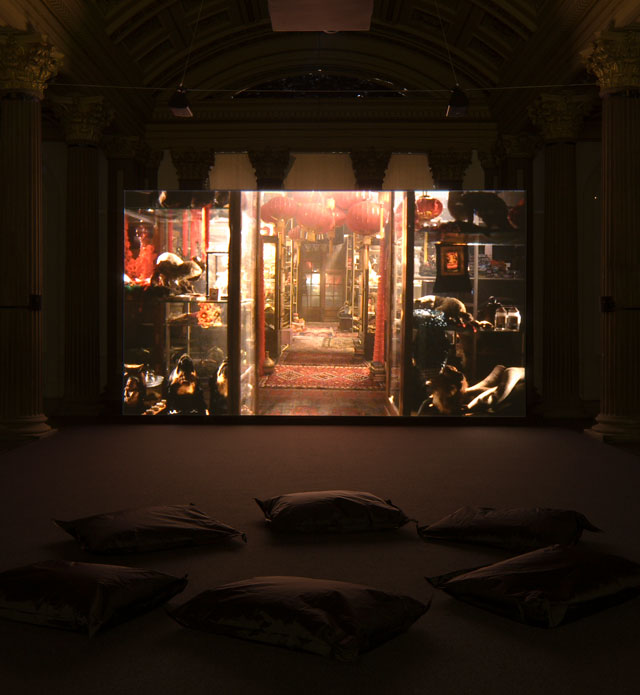 Disorient is a refreshing and disarming installation. It is depressing to see images of the wars fought in our name for no good reason, and to be, in this room, the former Royal Exchange Hall, implicitly brought to account for the damage done by our own society. We often talk about the legacy of colonialism, and it is tempting to place any blame on our ancestors (if they were involved in colonialism, especially). But the truth is, as Tan shows here, that we are all still involved. The Royal Exchange Hall in Glasgow may now be an art gallery, and that is a positive thing, but, outside these walls, society remains stuck in the past and this old orientalist and imperialist mindset. Disorient brings this truth home, but it is up to us what we do next. A reality check alone is not enough.

Reference
1. The God That Failed: The Neo-Orientalism of Today’s Muslim Commentators by Moustafa Bayoumi. In: Islamophobia/Islamophilia: Beyond the Politics of Enemy and Friend, edited by Andrew Shryock, published by Indiana University Press, 2010, page 80.