The Digital Revolution and the beginning of New Media Art

The Digital Revolution and the beginning of New Media Art

From the ICA’s landmark 1968 show Cybernetic Serendipity through Pac-Man and Mario Bros to the latest offering from Will.i.am, the Barbican’s interactive exhibition demonstrates how computers and technological development have changed the face of art

The ambitious project Digital Revolution: An immersive exhibition of art, design, film, music and video games attempts to portray recent historical events that have led us to live in the complex age of the digital society. From early computers to sophisticated artworks made by coding, the audience can visualise a concise panorama of a history that keeps changing along an accelerated path.

Even though there are old machines or rare examples of early video games inside vitrines, the project at the Barbican bears no resemblance to displays that we often see under the auspices of a science and technological museum or collection. The main objective of Digital Revolution is to show how technological development occurred through the perspective of human creativity. The starting point for the survey comes from a time when computer scientists set aside the search for further practical functions for the new machines, and instead looked to computers as tools to create, play and design. Digital Revolution analyses this technology through artistic lenses. One of the questions that it poses is how the digital revolution contributed to major shifts in the artistic field and how these novelties are delineating the future of all the arts.

The initial section of the show, named Digital Archaeology, reminds us that back in 1968 the Institute of Contemporary Art (ICA) in London opened its doors to the landmark exhibition Cybernetic Serendipity, the first large international visual art project to explore the creative potential of computers. It is estimated that its curator, Jasia Reichardt, gathered more than 40 artists, musicians and poets, besides the contribution of dozens of computer scientists and engineers. Among them were people who are highly regarded nowadays, such as the Korean-born American artist Nam June Paik and the pioneer of computer art, the German Frieder Nake. Studio International, being ahead of the other art publications of the time, published a special issue dedicated to the show, titled Cybernetic Serendipity, the computer and the arts, edited by Reichardt, with more than 100 pages on the theme, including essays by names such as the American composer John Cage.

The English artist Paul Brown (b1947), whose early computer art piece Builder/Eater (1977) is on display at the Barbican, spoke to Studio International about his memories of this “ancient” period of digital art and the impact of Cybernetic Serendipity. He recalled that after showing his ideas of drawings constructed by patterns to his tutors at Manchester College of Art, it was suggested that he should perhaps find another profession. At that time, in their opinion, what Brown wanted to create did not suit a career in the fine arts. Without putting his art interests aside, he followed his tutors’ advice in a way, and found Nova Express, a lightshow company that ultimately led him to a more creative practice combining technological devices.

Later, after visiting Cybernetic Serendipity at the ICA in 1968 and seeing its publication by Studio International, he began to investigate the use of coding to make art. “I saw Cybernetic Serendipity and was immediately attracted to the work,” he explained. “I was already interested in trying to remove myself from my productions (something I had discovered from my experiences in the Nova Express lightshow). When the lightshow finished, I began to look around for opportunities to use computers and, by 1974, I was using them almost exclusively. From the first, I was attracted to the possibility of making art via the agency of an intermediary language and of working ‘hands off’. I was also excited by the potential for the computer as an assistant or collaborator and not just a tool.”

Digital Revolution presents Builder/Eater as an example of seminal computer artworks. It is a kinetic painting on a screen, a real-time generative work – considered one of the first ever built in the world – in which two coexisting arbitrary algorithms produce trails on the screen, one lighting up pixels and another turning them off. It plays with chance in algorithms. When asked about the difficulties in creating this piece, Brown said that the technology was a big challenge. “Everything had to be written in DG assembler and it had to have a graphic display system with the display driver code written by the electrical engineer and artist Julian Sullivan. The second version (1978-79) was likely to have been one of the first artworks that had an embedded dedicated microprocessor. My initial work for that system had to be hand-punched on paper tape in machine code.” In comparison, Brown explained, the version on display at Digital Revolution was recreated in an actual code (processing) using the mini-computer Raspberry Pi. “It only took a couple of weeks to complete. When I first got it running I was amazed at the verisimilitude to the original,” he said.

For Brown, one of the highlights of the show is this historical part in which old technological devices are recovered, illustrating for young generations how life was before the digital revolution reached its peak. As far as the artistic aspect is concerned, the exhibition has accomplished telling a history often unknown, even in art schools. The show also brings together contemporary artists such as the Mexican-Canadian Rafael Lozano-Hemmer, one of most innovative names in new media art nowadays. Most of the artworks presented at the Barbican have an interactive or playful feature, where the participant needs to complete the artwork, which makes the artistic part of the show compelling and fun.

Besides the artistic discussion, the exhibition, which occupies the entire space of the Curve gallery in addition to other areas of the Barbican Centre, introduces how computer-based technology was of huge impact in the creative industry. It shows examples of seminal video games such as the very simple Pong (1972) or character-led games such as Pac-Man (1980) or Mario Bros (1985). It also focuses on how computer systems have changed the way that we perceive film and music. There are dozens of screens showing the evolution of graphic design in video-clips such as Dire Straits’s video Money for Nothing (1985) to last year’s award-winning feature film Gravity.

On display, there are so many pieces to see, listen to, experiment and play with that on the one hand, it can be said that it is an exhausting exhibition. On the other hand, however, technology has implemented uncountable transformations in the creative practice and the task of summarising them is not easy, especially if one takes into consideration the short time in which this revolution has taken place. In the 1960s, no one could have imagined that computer technologies would become so prevalent in our everyday life. They have evolved to encompass the entire contemporary social fabric, and now there are an extraordinary number of creative events, objects and artworks that can be historically shown and explained. In one fell swoop, the Digital Revolution has achieved the goal of presenting and explaining what this radical change meant to art-making and perception.

To finalise, at the end of the Curve space, there is a sonic and visual installation by the American musician Will.i.am and the Japanese artist Yuri Suzuki. Pyramidi (2013) features a robotic piano, drums and guitar, a proper music band with a futuristic design, programmed to play the song written specially for the show. A huge projection of Will.i.am sings: “We are dreaming about the future.” With this tune ringing in our ears as we leave the exhibition, we can playfully imagine what the scale of this show will be in a just a couple of years, thanks to the accelerated pace with which technology keeps altering the art and creative industry. 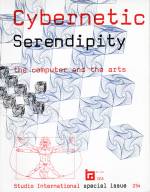 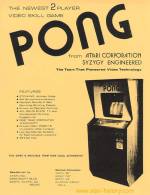 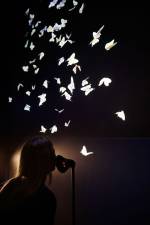