The Royal Scottish Academy in Edinburgh has a particular advantage over the Royal Academy of Arts in London - its Annual Exhibition coincides with the Edinburgh Festival. The mostly artist members attended the opening, resplendent in a fine uniform with decorations that equate with the festive spirit. This year, the Hanging Committee, which included Will Maclean (see earlier Studio International coverage of his work) has moved further forward, reducing the number of exhibits, which used to be excessive, and providing a clear contemporary sampling of what is happening north of the border, not just in Edinburgh. What is also new is the abandonment of one single, cramped 'architecture room', dispersing the relatively few, but outstanding works throughout the exhibition. 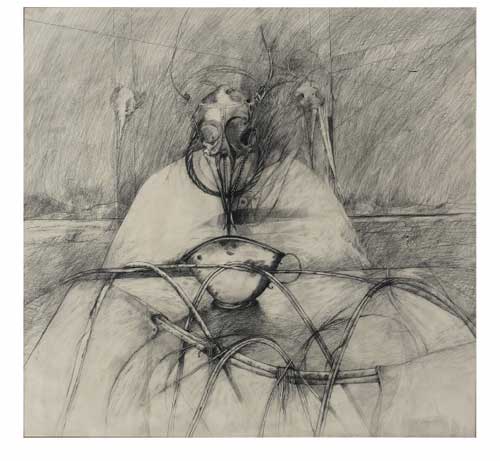 Will Maclean RSA - King of the Summer Isles

The architecture, in fact, shines: permeated by a new awareness of landscape values as an overriding element. The massive, multivalent tableau by Kathryn Findlay entitled 'Thinking Fields' seems to set the whole agenda for other architects exhibiting, now and in the future. Findlay herself has achieved major fame internationally, but has been drawn back to teach and practise in her native Scotland. Inspired by an early statement by the New York-based writer and critic, Rosalind Krauss, entitled, The Originality of the Avant-Garde and other Modernist Myths, this work embellishes the core of her creative thinking.

Works by other architects, such as Robin Webster's beautifully positioned 'New House overlooking Shuna Sound, Argyll' and Rick Russell's exhibit of his new project at Perth for a garden and horticultural centre, 'The Calyx', are masterly; as will be David Page's work for a Maggie's Centre for Cancer Care at Inverness, superbly landscaped by Charles Jencks. Back in the city, Richard Murphy's 'Sean Connery Film House' project is wholly urban in Festival Square, but lacks the wit and sparkle of Will Alsop's similarly rotund Fourth Grace building close to the Liverpool Waterfront, a project that has sadly now been cancelled.

On the sculptural front, there is further determined evidence of a breakout, as Eduardo Paolozzi himself did from this same city. Gareth Fisher's figure, 'More Armature than Head', has a humanoid pathos; it turns traditional categories literally on their head, as in his 'G+G Head', also shown. Doug Cocker's array, 'Eight Horizons', subtly paraphrases, in finely crafted wood elements, what can be taken as readings of Scottish coastal landscape form. Jake Harvey's 'Pulse' is a typical work from him, of controlled yet aberrant minimalism. Certain works by Will Maclean move into mixed media/installation art, yet his showing this year is relatively modest, reflecting his active personal contribution to the process of selection and hanging of the whole exhibition here: 'King of the Summer Isles' is a superb drawing, which speaks redolently of the artist's Hebridean roots and evokes their living mythology. Arthur Watson's 'Towards a Year End Drinking Coat' reminds one powerfully of the celebratory tendency at Hogmanay, of its joys, its risks, and aftermath. There is beautiful poetry, too, in Ian Hamilton Finlay's 'Women of the Revolution' (with Keith Brookwell). This superbly crafted carrying base for a plant box is overlaid in its detail with a metaphor of toil, and another floral tribute contained, to the inspiration of female fertility. There is a moving tribute early in the exhibition to the late Sir Eduardo Paolozzi, who died in early 2005, with works in Scottish collections. A minor, but wistful work by his fellow Italian-Scot, Richard Demarco, 'Two Artists Painting Venice' makes one wonder who they are. It is also reminiscent of the work by John Singer Sargent currently on display in the exhibition 'Impressionism Abroad: Boston and French Painting' at the Royal Academy of Arts in London. Is this perhaps Demarco's own cue to the next Venice Biennale, in two years' time? For his thoughts on this year's event, see his Venice diary on this site.

With the richness of work in painting and sculpture that can be seen in this RSA exhibition, who can doubt the sound thinking and planning for a separate Scottish Pavilion at the Venice 2007 Biennale? As for architecture, Kathryn Findlay must be a natural candidate for the British Pavilion at next year's Architecture Biennale there. The Royal Scottish Academy has redeemed itself from past provinciality and all serious appraisers of contemporary art need now take stock of the powerful energy, and talented work in new directions that is currently on show here. 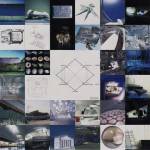 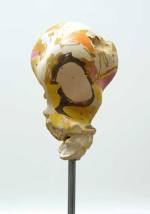