Julianne Swartz interview – ‘Joy is also talking about sorrow and despair, so we will know what joy is’

Julianne Swartz interview – ‘Joy is also talking about sorrow and despair, so we will know what joy is’

Swartz talks about Joy, Still, her site-specific sound installation at Grace Farms, and how the multi-use centre in Connecticut, designed by the Japanese-based firm Sanaa, became her instrument

Joy, Still is a site-specific sound installation by the New York-based artist Julianne Swartz (b1967, Arizona) that opened last September and is on view until 3 March 2019. It is primarily located in Grace Farm’s Sanctuary, the topmost pavilion that houses an elegant amphitheatre. Grace Farms, not at all a typical country farm, is a non-profit, high-minded, multi-use centre that opened in New Canaan, Connecticut, in autumn 2015, dedicated to social justice, art, the environment, faith, community and more. The building, designed by the Pritzker-prize-winning Japanese architectural firm Sanaa, is a gem, fashioned as a long, fluid, serpentine sweep with switchbacks so that the entire glass-walled, light-saturated structure is visible from all vantage points. Known as the River, which it resembles in form, it is scrupulously, seamlessly integrated into its surroundings. Inside and outside converse in a dialogue that is as much about space, light and movement as it is about solid structure. It ascends slowly, almost anti-gravitationally, as if progressing toward an experiential, existential state of serenity and even enlightenment. 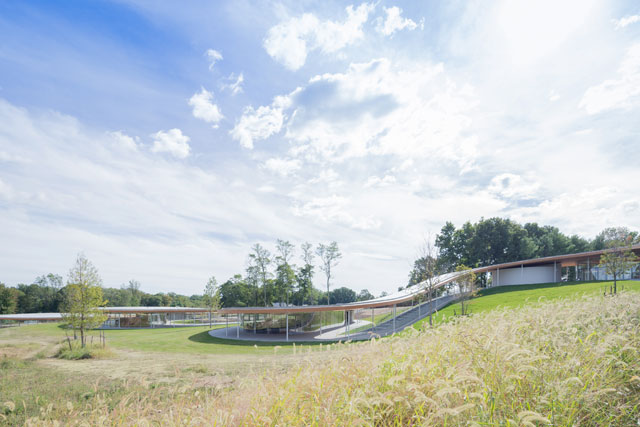 A three-part project created in 2018, Swartz’s enterprise is perfectly matched to its site, and begins (although there is no real predetermined sequence for viewing) with Transfer Objects, also called poem books. They are four endearing wooden objects placed randomly in the library, their plump comfortable shapes inviting hugs, like a favourite toy. Visitors are encouraged to pick them up, to take them to a seat, to listen to them, the polished wood smooth as silk against the skin. When you hold it to your ear, you hear a reading of a poem. Or if you choose the one for sight, you peer into a pinhole and see a short poem.

The other two parts are Prelude/Postlude, a four-channel soundtrack that is an introduction to the theme, and Joy, Still, a 16-channel composition that is the culmination of the project and made for the Sanctuary, the sound elements embedded in the plenum beneath the floor, creating both sound and the embodiment of that sound as vibrations. It is a symphony of voices, hums, thrums, the aural assuming a corporeal presence. Some phrases that emerge from the sonic weave are a child’s voice responding, “I don’t really feel joy, it’s just there”, in answer to the question, “Where do you locate joy in your body?” Or, “I danced for the joy of surviving at the edge of the road,” or “I think it is a way of being – I do.” They are all the more poignant spoken, sometimes almost sung, with a range of intonations. Joy, Still (as the word “still” indicates) doesn’t avoid the darker aspects of the world. That becomes the complex ground for flashes of joyousness that are more miraculous for the contrast. 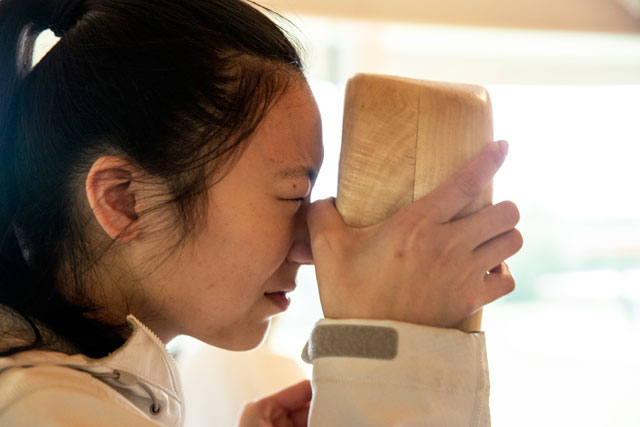 The following is an edited excerpt of a conversation between Julianne Swartz and Lilly Wei at Grace Farms.

Lilly Wei: Would you tell me how this project, Joy, Still, came about?

Julianne Swartz: Pam Ruggio, the arts initiative curator of Grace Farms, knew my work from the Aldrich Contemporary Art Museum in Connecticut. She invited me to come and learn more about Grace Farms and its mission. Then she and Kenyon Adams, the director of the programme at the time, asked me to participate in a creative team about the subject of joy. In the past, such teams at Grace Farms were not production-based but more about presentation. Because my work is reliant on crowdsourcing – taking materials from other people’s work, interviewing – Pam, Kenyon and I thought I could make a work synthesising the information gathered from the Joy creative team. These teams are handpicked artists from different disciplines, such as writers, poets, musicians, dancers, artists, and so on, to approach a certain subject in terms of their work. For the Joy team, there were nine core members: a visual artist – me, three poets, two theologians, a musician, an essayist and a dancer. It was like a retreat and a study group. We stayed near Grace Farms and met every day to discuss the topic of joy, with different readings to start the conversation, bouncing thoughts off each other and presenting our work to one another. Another aspect of it for me was my recording sessions with the team; I talked with everyone personally except for Meredith Monk [the dancer], whom Kenyon recorded, due to logistical problems.

LW: How did you decide what the structure would be, the specific content?

JS: I assembled material starting in May last year, when I met the poet Christian Wiman. He had edited an anthology of poems on joy and included an essay in it and the team used it in our discussions. I made hours and hours of recordings with the people in the group and spent the month of August synthesising the material into three parts: one for the sanctuary, which would become a 16-channel sound installation; a four-channel composition for the hallway leading into the sanctuary; and the poem books, for the library adjacent to the sanctuary.

LW: Tell me about the poem books in the library. I encountered them first.

JS: The poem books were the easiest to make, each book a recording of one poem written by a poet in the group: Nicole Sealey, Ross Gay and Chris Wiman. Two of the poems are written in the second person so they seem to also directly address the listener. I like Nicole Sealey’s poem because, while it is called Object Permanence, it talks about death and the impermanence of the body. The fourth book isn’t an audio book but a visual one. You look inside its pinhole and see the poem, reading it for yourself. It was by the late Stanley Kunitz. I wanted one of the objects to be different from the others. As for the form of the poem books, I wanted to make something you could hold in your hand as a tactile experience, but bulky, like a phone, perhaps, held to your ear (or eye), but really different from that, very object-based and very smooth with curves that fit into the nooks of your body. 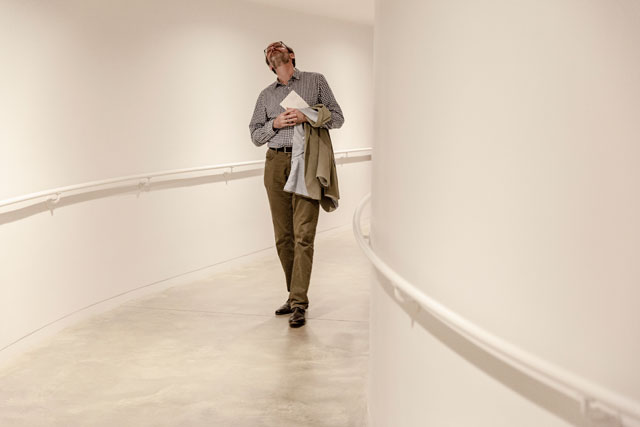 LW: And the component in the hallway?

JS: I really liked so much of the material I had accumulated from my recordings but didn’t think it could all co-exist in one piece so I decided to split it up spatially into different modes of absorption. The poems had to be intact, so they became the poem books, appropriate for the library, and absorbed one to one. And since the hallway is an introduction, the material for that is more didactic and informational, more about ideas and absorbed intellectually, with your head.

LW: And that takes us into the Sanctuary.

JS: The materials there are more experiential and subjective. They are about personal experiences, about absorbing them through your body, about making sound felt, about making it physical. Primarily, the content was from the recording sessions I had made, but I added two components to that. One was instrumentation. In my interviews, I played specific notes using tuning forks and had the person I was interviewing hum along. For the other, I asked permission to invite another person into the group, which I was given. Rhys Ellis is an 11-year-old songwriter who identifies as a gender-queer child. He goes to school with my daughter so I knew his work – which is incredible. I asked Rhys to write a song for the piece from Chris Wiman’s Joy anthology.

LW: How did the architecture of Grace Farms shape the project? It’s such a spectacular site, one of Sanaa’s best, I think.

JS: Yes, the building is breathtaking. It’s such a strong visual experience to be in that architecture. It’s so porous and permeable, so open, with all its glass walls. I was really struck by how the indoors and outdoors merged. The building was the instrument. And that it has no straight angles, and everything is curvilinear means that sound travels differently there, with more echo and resonance. 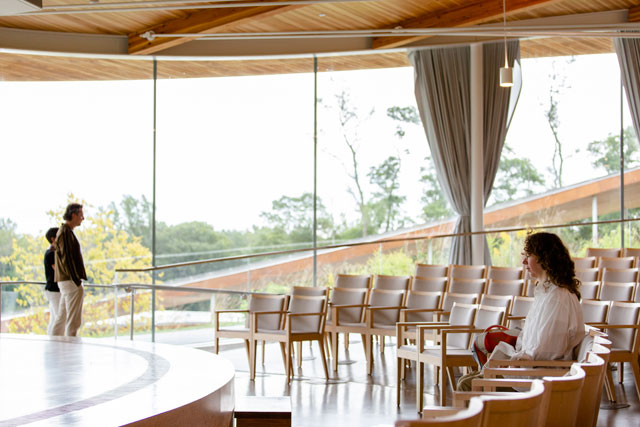 In the hallway, for instance, there are parabolic pockets so I put my sound elements in strategic places in the parabolic curve, and it just travels. There wasn’t anything necessary to add. And that space was already there. It is the access ramp for the handicapped and a fire exit, and not used under normal circumstances. But when I walked through it, I knew it was perfect, the acoustics were incredible.

LW: And tell me about what you did in the Sanctuary, your version of playing the building.

JS: My work in the past has been a combination of sound and physical objects. But when I entered that space, it was such a strong aesthetic experience that to add objects to it didn’t make any sense. I saw some holes in the floor and asked what they were and was told there was a small cavity between the floor and the foundation of the building for thermal purposes. I thought that could be the solution, to place the sound elements beneath the floor. It was a little like fishing. We had to run wires through it since it was too small for a person to go in. And we did it. The sound actually vibrates the building. It permeates the cavity and travels throughout the pavilion.

I wanted to do it because we don’t usually have sound coming up from below, and it would be a surprise. But, mostly, it was because everything could be hidden, and not interfere with the aesthetics of the structure. The audience can listen to it standing in one position but it’s better to walk around. I was so excited by the visual and acoustic possibilities. They were remarkable.

LW: What might you want the viewer to take away from all this?

JS: I wanted to try to establish a set of circumstances so that a viewer could open up more. I thought that these three distinctive ways to respond would do that, opening up the heart, mind and body. Opening, I think, is the key word. And joy is not always talking about joy, but it is also talking about sorrow and despair, so we will know what joy is.

However flawed our lives are, however vulnerable we are to tragedies, we still have an ability to feel joy. I thought about that – and how, in very dire circumstances, there is a moment, even then, when that ability can breath through, can sustain.

It is about a complete experience.