The original Aubette was built on Strasbourg’s Place Kléber by architect Jacques-François Blondel between 1765–72. At the end of the 18th century the changing of the guard used to take place in front of the building at dawn each day. Between 1926 and 1928, Aubette was redecorated by Sophie Taeuber-Arp, Jean Arp and the De Stijl artist Theo van Doesburg – the latter of whom envisaged the complex as a Gesamtkunstwerk – earning it the epithet of  “the Sistine Chapel of abstract art”. Covered over and partly destroyed after just 10 years, the avant-garde decor was only restored – and, at that, only in part on the first floor – in the 1990s and 2000s, following classification as a historic monument in the 80s. This first floor trio of foyer bar, function room and cine-dancing space now form an impressive contemporary art gallery.

Perhaps appropriately, for a space of such international and cross-cultural significance – not only artistically, but with its location in Strasbourg, Alsace, the once contested region passed back and forth between Germany and France – Aubette 1928, as it is now known, is currently showcasing the work of Céleste Boursier-Mougenot, who will be representing France next year at the Venice biennale. Born in Nice in 1961, the artist was trained as a musician, as is evident from the sonorific nature of this tripartite show. Boursier-Mougenot’s works over the past 20 or so years have always placed emphasis on the integration of sound and the centrality of listening to the artistic experience. His immersive installations merge movement and sound and extract the musical potential from the seemingly banal soundtrack of quotidian life.

Aubette’s cine-dancing space is aptly filled by two musical compositions, approches (1993) and immersions (1993), written by Boursier-Mougenot to accompany a piece of theatre by the Pascal Rambert Theatre Company, for whom he was composer from 1985-94. The first was conceived for four a cappella voices; the second for a string quartet. Here, diffused by eight loudspeakers, the works take on a hymn-like, chanting aspect, with consonantal utterances – “emm, enn, eex” – and vocalic breaths, articulations and enunciations, summonsing and praising, all set against the harsh plucking and scraping of strings; and interweaving of chords and discord.

Next door in the foyer bar stands a curious living sculpture. A euphonium, mounted on a rough pedestal, is hidden beneath streams of foam emanating from its bell. Somehow these bubbles are being producing as a response to approches, filtering in through the open doorway. A clever and intriguing visual metaphor for the interaction of sound, music and sculpture, persistance I (2014) lends its name to the exhibition as a whole.

The key work in the show, however, is videodrones (2000-14), a mixed sound and video installation, running in the function room. On top of Van Doesburg’s geometric walls, images are projected live from six cameras tracking the movements of the public outside on Place Kléber. Cyclists weaving in and out of the crowds, friends chatting, couples strolling along hand in hand, leafleteers observing and pouncing on their prey, lost tourists, workers striding purposefully, taxis, pushchairs, texters unaware of where they are heading – everyone becomes, unwittingly, part of this installation.

The video projectors have the ability to mix and simultaneously show images coming from several cameras. A single frame, therefore, can consist of more than one reality, an effect of “polyscopy”, the simultaneous diffusion of images of one and the same moving object filmed from several different points of view. Reality is recomposed, creating a surreality or fiction.

Sitting on a strange but comfortable mass of grey spongy “sofa” – which, to look at, appears more like a rock formation – designed by Stéphanie Marin, I could have whiled away hours, mesmerised by this observation and inconspicuous invasion of contemporary life. The soundtrack is redolent of Tibetan chimes, a continuous humming, a dull drone. The video output of the cameras is connected to the input of an audio amplifier, which, in turn, modulates its output in function of the quantity of light it receives and according to the size and movement of the passersby. For the hypnotised visitor, the minutes pass and the landscape changes. None of this is being recorded for posterity, since, according to French privacy laws, you cannot use images of people without their consent. The artwork is therefore live and temporary, ephemeral, a snapshot and composition of life, its sounds, its blurred images, the movement, the speed and change.

The fact that this is being hosted at Aubette, the location of the erstwhile changing of the guard, is fitting. The work invites visitors to step out of the hustle and bustle of their everyday life, to enter a parallel reality, and to observe and reflect on this normality. Fully immersed in the artwork, they are, at the same time, separate from it, internal but not intrinsic. They are invited to look at where they have come from, to contemplate, to pause, to breathe and, ultimately, to step back out there, once again becoming a cog in the system and, simultaneously, a part of the work, as, for those still on the inside, they appear larger than life on the walls, walking unawares across Van Doesburg’s walls, trampling on history, going about their business oblivious to the past and future. 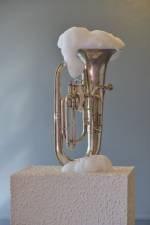