This exhibition comprises a wallpaper of Monk’s photographs from the past 20 years, along with artworks from a sprawling list of his ‘invited guests’ 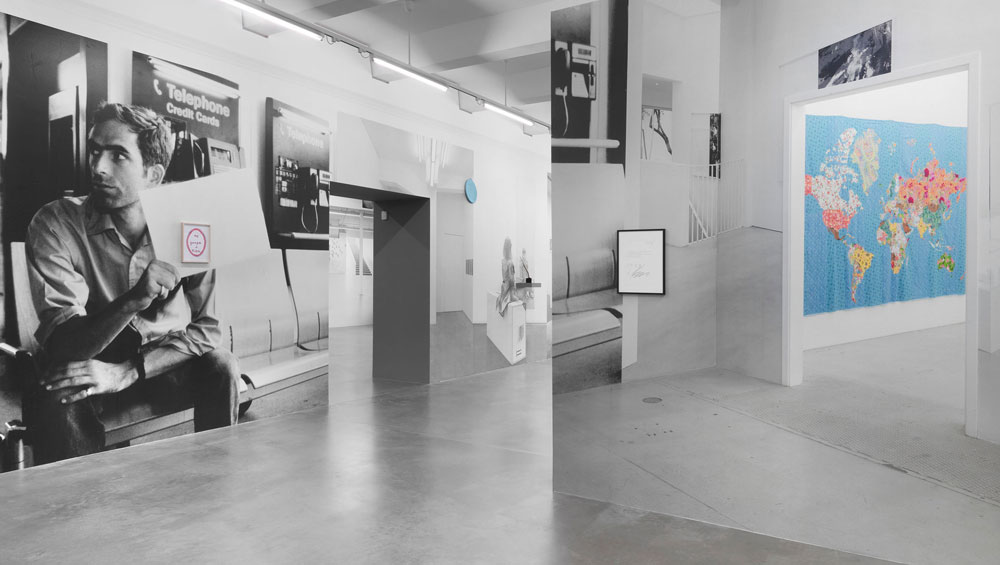 A Picture Is No Substitute for Anything, reads Louise Lawler and Sherrie Levine’s famous invitation card for an exhibition that was not much more than that. The framed piece of pale blue paper is part of Jonathan Monk’s Exhibit Model Four – plus invited guests, a sort-of retrospective at the Kindl brewery-cum-art space in Berlin.

Lawler and Levine’s text might appear a damning inversion of the more familiar “a picture is worth a thousand words”, particularly considering their entirely picture-free exhibition. Their statement is accompanied by the similarly oblique His Gesture Moved Us to Tears, which could be seen to corroborate the disappointed reading and offer the gesture, whatever that is, in the place of images. But it could also be the opposite. Can a picture not be a gesture, a way of reaching out? And if it is no substitute, then that is perhaps because it is better viewed as something with a substance of its own: a thing in itself.

In his fourth show exploring this concept since 2016, Monk (b1969, Leicester) has covered the walls of the gallery in black-and-white installation shots of his own previous exhibitions. That these now include other such self-referential ventures only adds to the dizzying impression. The black-and-white photographs blend in with the floors and walls of the space in a trompe l’oeil effect; room after room, though in different locations, photographs of photographs, all things in themselves. 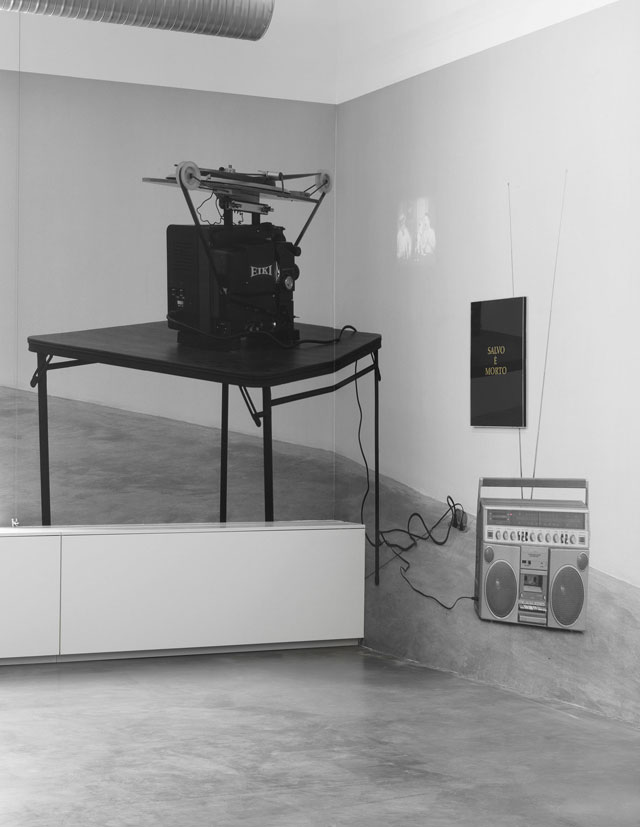 The selection of physically present works in the show comes from Monk’s own collection, and makes the freshest layer in this onion-structured archive. Many date from the early days of conceptual and fluxus art and are sourced from a host of artists, whose names will come as no surprise to those familiar with Monk’s work. They include Jan Dibbets, Dan Graham, Bas Jan Ader, Sol LeWitt, Bruce Nauman and Martin Kippenberger.

Opening the show is Circle on the Wall (1968), by Ian Wilson, known as one of the artist’s last physical works, but the thin pencil line that meets its audience is barely that. Since it may be reproduced following the artist’s instructions for any exhibition anywhere, what constitutes this work, the line or the instructions? And, in a Monk show, what makes it Wilson’s?

The wall piece is a sibling to Wilson’s Circle on the Floor (1968), but the latter, drawn with chalk, disappears as visitors traverse the room. Monk’s gesture – to use Lawler and Levine’s word – is the opposite, insofar as his material accumulates only when vistas are repeated and new works added. Still, the result is not dissimilar, the defining lines of authorship, time and place turned to dust and swept away.

Ed Covered with 12 of His Books and Ed Ruscha with Six of His Books on His Head (both 1970) show Ruscha photographed by Jerry McMillan, and continue the enquiry into inspiration and kinship that runs through the show. All artists and writers sit on the shoulders of others. “I’m sure even cavemen copied each other’s drawings,” Monk has said in an interview. 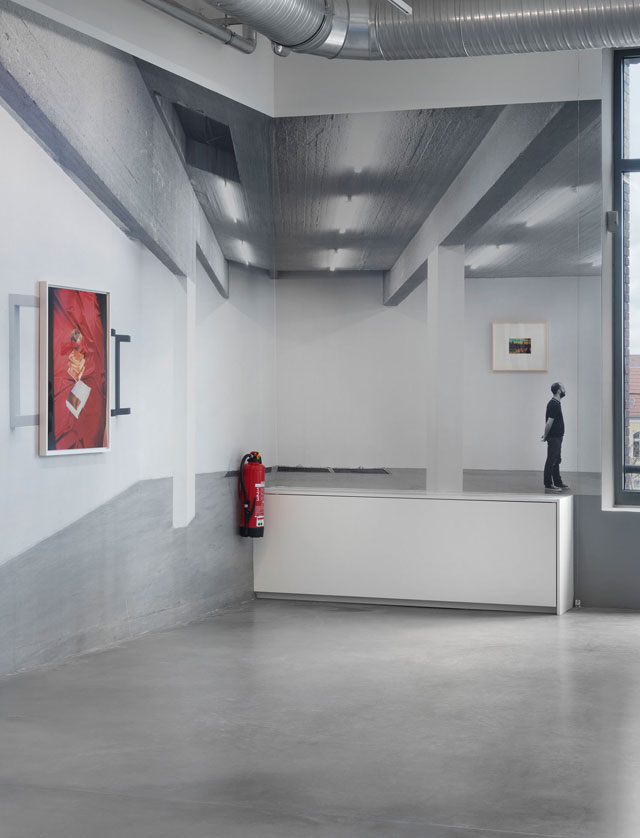 In her memoir about alcohol addiction, The Recovering, Leslie Jamison describes writing a book, and living through a narrative that has been told countless times before: “In recovery I found a community that resisted what I’d always been told about stories – that they had to be unique – suggesting instead that a story was most useful when it wasn’t unique at all, when it understood itself as something that had been lived before and would be lived again. Our stories were valuable because of this redundancy, not despite it. Originality wasn’t the ideal, and beauty wasn’t the point.”

Recovery from abuse is about repetition and recognition and losing your voice in the choir of others who prove that your experience is far from unique. Much art and literature is produced in the torturous quest for originality that Jamison describes – and in turn often paired with some sort of drug anaesthesia – but does it have to be?

In 1966, Ruscha famously photographed every building on Sunset Strip in Los Angeles. In 1997, Monk filled in the blanks with a series of pictures of every road leading off it – a homage, a critique, a supplement, a friendly favour. At the Kindl, Ruscha’s Sweets, Meats, Sheets (1974) constructs an aesthetic lineage between candy, cut meats and a package of bedsheets all laid out on matching red satin. This work makes a model for the rule of family likeness that also governs Monk’s ever-expanding network of correspondences, such as Rosemarie Trockel’s Adam and Eve collage Can Trees Cry? (1994) in direct resonance with Monk’s amended copies of Salvo’s tree paintings, distinctly here, though with us only via the installation-shot wallpaper, installed in a different gallery at a different time. 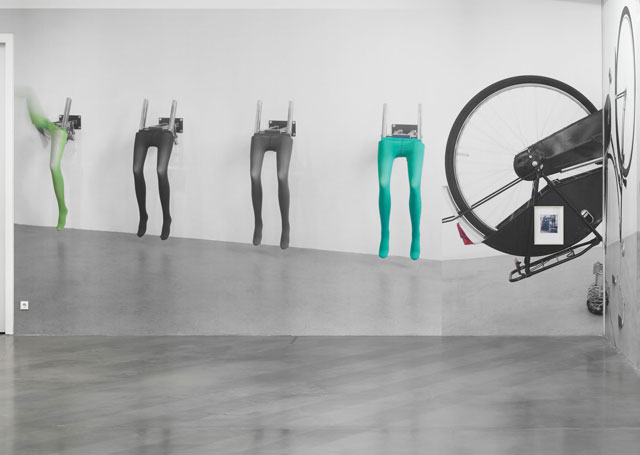 Whether this exhibition format is an artwork or a way of curating, I am not sure. Perhaps it is something that will become an artwork between now and Exhibit Model Five, when the works on the walls of the Kindl have settled into the surface of Monk’s wallpaper resumé. All the same, it is certain that, in his exhibitions past and present, something distinctly other is generated in the layering of Monk’s practices with those of other artists.

Salvo died in 2015, and Monk exhibited his own interpretations in the late artist’s studio in Turin the year after. Joining Trockel on top of Monk’s reproductions is an original by the Italian artist himself, Salvo e Morto (1977) – simply those words screenprinted on a black background. In this composition, the saturated and softly morbid space of Salvo’s paintings, hovering at the waning of existence, expands into the room, not as a feeling, but as a thought. That the afterlife does not name a religious abstraction, but rather the literal ways in which other people, dead and alive, continue to move and stir us beyond their physical presence.