The miniature paintings of German artist, Adam Elsheimer, are legendary; and yet his work has generally been insufficiently recognised. This was a brilliant religious, figurative and landscape painter whose influence upon others, including his great friend Rubens, was out of proportion to the very small active period of his career and life. Recently, one exception to this documentative void has been the outstanding monograph completed by the late Keith Andrews, Keeper of Prints and Drawings at the National Gallery of Scotland from 1958 to 1985. Andrews' exceptional monograph on Elsheimer and his career, Adam Elsheimer: Paintings, Drawings and Prints (Oxford: Phaidon Press, 1977) broke new ground in bringing the brilliance of Elsheimer's work into serious focus. Now the same National Gallery has more fully realised Andrews' vision, this time by mounting a major exhibition of the work and to bringing to bear all the fruit of his research.

This is an unprecedented festival exhibition, bringing together all but two of the 37 paintings on copper he made. It is also a curatorial triumph, for which credit goes to the curators of the partner galleries in the venture, Max Hollein of the Stadelsches Kunstinstitut, Frankfurt and Ian Dejardin of the Dulwich Picture Gallery, London, where it opens next from 20 September-3 December 2006. Emilie Gordenker curated the exhibition in Edinburgh.

Elsheimer's subject material was largely and almost entirely derived from biblical narrative, mostly related to episodes in the stories of the Saints. His figurative skill was remarkable. What makes Elsheimer's work particularly interesting for art historians is the range of cross-currents, the influences of other near-contemporaries in Europe on his work, and, in turn, his own influence on them through the 17th century and beyond.


His close correlation of graphic work, gouache and prints was a profoundly thorough way of working ideas through to painted fruition. He incorporated, in particular, strong influences from Caravaggio on the one hand, and from Brueghel on the other, from whom he absorbed dramatic effects of natural light. He successfully combined too, the episodic, brooding mood of northern European work, with the exuberance of Italian late 16th-century work by painters such as Tintoretto and Veronese, infusing his landscape backgrounds with the idyllic tracery of Altdorfer's trees. Elsheimer could not have had the confidence to mix all this unless he had already successfully positioned himself in Rome.

Elsheimer first went from his home city of Frankfurt to Italy in 1598, aged 20. He reached Rome via Venice in about 1600. He soon established a special following among fellow artists there, including in their numbers both Claude Lorrain, who he knew little, and Rubens, who became a lifetime friend. Amid such enthusiasm, and in the warmth of southern Europe, Elsheimer was to remain in Rome for the remaining decade of his short life. Rubens had left two years before Elsheimer died, to his great sadness. While in Rome, Elsheimer was probably introduced to the vision of advancing science of the time, namely the telescope. The use of early telescopes to scan the skies was a preoccupation in Rome at that time (although Elsheimer had contact with Galileo, who was in Padua, he plotted the new astronomy himself). As a result, he mastered the skill of accurately depicting the moon, and other astral phenomena which appear in his paintings.

The biography and chronology of this historic artist is remarkably lacking in any full documentation. Even his parents and his childhood home in Fahrgasse, Frankfurt (which carried a commemorative plaque) was destroyed by wartime action in 1944. Ironically, the same moon which Elsheimer portrayed so accurately and brightly provided too clear a light for enemy bombers. It has been a remarkable curatorial triumph to assemble 35 paintings after so long a period and after such a wide dispersal of the oeuvre through museums and collectors.

Elsheimer's arrival in Rome was indeed significant, for without delay he completed the dramatic work, 'St Paul on Malta', highly expressive in the handling of light sources and weather effects, and also his first history painting. At this stage he reveals a clear reliance on the work of Jan Brueghel the elder. The contemporary Roman Bassano family would seem to be the other influence. But socially and technically, above all, it was Rubens who was to prove the major influence upon this last decade of Elsheimer's truncated career.

In about 1603, Adam Elsheimer became particularly interested in the lives of the Christian Saints, and their turbulent history. To turn such narrative into visual episodes was a challenge, which would dominate Elsheimer's essentially Lutheran and Protestant sensibilities, soon to convert to the Roman Catholic faith. Yet one can sense Rubens always looking over Elsheimer's shoulder, and he also made drawings from motifs of Elsheimer's work, which went into his own. This mutually valuable relationship continued until 1608, when Rubens finally left Rome.

Dominating this exhibition is a major altarpiece by Elsheimer, which occupies the centre space. Comprising seven panels in all, it dates from 1603, and is entitled 'The Finding and Exaltation of the True Cross'. This has been miraculously reconstructed (as the catalogue relates) from widely dispersed and missing originals over the years, in such a manner that Keith Andrews could never have dreamt of: even the final work was reunited only in 1981. The central panel seems to have been inspired by similar work by Tintoretto and Titian, emphasising the importance of Elsheimer's short study period in Venice before he reached Rome. The whole ensemble had been put up for sale after Elsheimer's death, actually in 1612, and it is arguable that Elsheimer made the work without a major patron. Again, documentation is entirely lacking.

In the last five years of his life, Elsheimer was working with an established reputation and developing the many figure works of the Saints. He now revealed a new awareness of landscape. The painting 'Aurora' of 1606 now contains no figures, and stands uniquely as a landscape work, sublimely and without the usual figures or even human narrative. From this point, the evidence is that the representation of nature and the various atmospheric effects assumed a new importance for him. Rubens was, of course, still in Rome, and must have been surprised at this new development. But Elsheimer was now moving in his own direction. This transition is well illustrated by the changes in the sunlit landscape of the earlier version of 'The Flight From Egypt', to the ultimate, darkening skies of the final 1609 version. Landscape effects are now supplanted by a celebration of the starlit night sky in all its glory. This was highly appropriate since, in 1610, within a year, Galileo (working in Padua) was to announce his findings on the nature of the planetary system. But telescopes were already scanning in Rome and, in 1609, Elsheimer was in contact, through an intermediary, with Galileo. Sadly, this painting was to prove to be Elsheimer's own swansong. On his death, Rubens was devastated with grief in his absence.

This exhibition re-emphasises how a young and brilliant artist can influence - even transform - the culture of his time, however short his working career may be. It is interesting to speculate today upon how Elsheimer's work would have developed if he had lived a full span of life, with the new inspirations he had found. Certainly we can be confident that he would have proved a major influence on the art of the 17th century as a whole, and on landscape painting in particular. 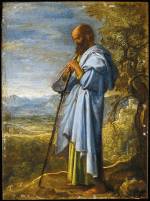 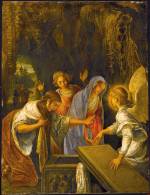