From a balloon bunny to a vast, glossy pink Venus of Willendorf, there is everything we would expect from Koons at his latest exhibition at the Ashmolean – but there is also a sense that he has run out of new ideas 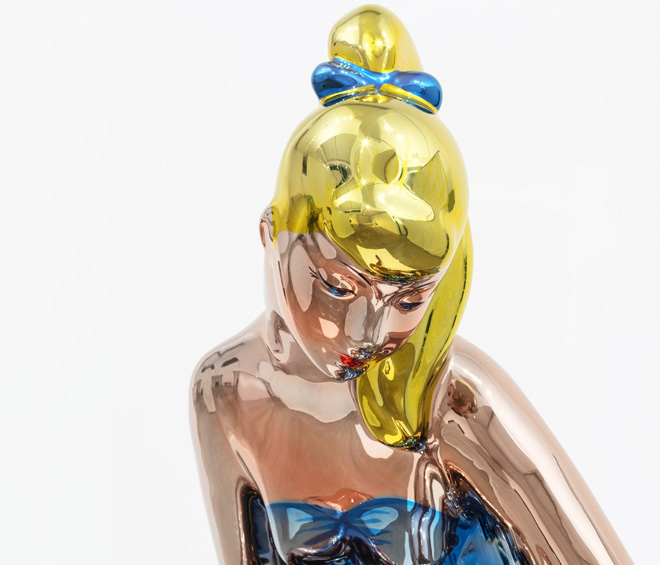 In the columned, limestone halls of the Ashmolean, in the city of neo-gothic libraries and aging scholars, Jeff Koons’s exhibition might seem like an alien presence, a sort of artistic spacecraft from the future, all shiny chrome bunnies, bright colours and cartoon characters. But behind the cold, ancient walls of the university town, great leaps forward in AI, medicine and technology are being made. And conversely, behind the glossy, digitally aided designs, Koons is looking backwards, towards the kitsch of the 20th century.

This latest exhibition, made, we are told, in response to the Ashmolean’s collection, has everything we have come to expect from Koons, beginning with a room of his early works, such as a baseball suspended, as if by magic, in saline solution. There is also one of his iconic balloon bunnies and a plaster birdbath with a gazing ball affixed to the top. I had never heard of a gazing ball before, but in Koons’s home state of Pennsylvania they were apparently a popular garden ornament. I mention this because these balls will make an annoying reappearance later in the exhibition. 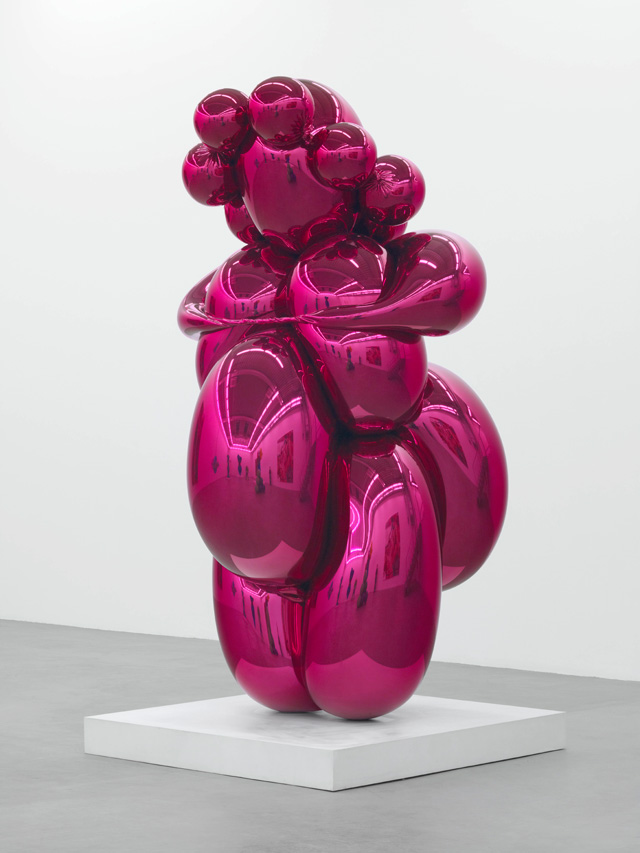 And then we move to the central, and to my mind, the most impressive room, to be greeted by the back of an enormous steel balloon sculpture of the Venus of Willendorf. The Palaeolithic original is an intimate little limestone figure of a woman with large hanging breasts and belly; Koons’s version is a gaudy reinterpretation. I wonder what the stone age artist would make of this glossy pink giant. There is no doubt that it is an impressive sight. But what does it add? If anything, I can’t help but think that it simply apes the original, without any real appreciation or feeling. But when Koons applies the same treatment to the beloved ceramics of his childhood, the results feel more significant. 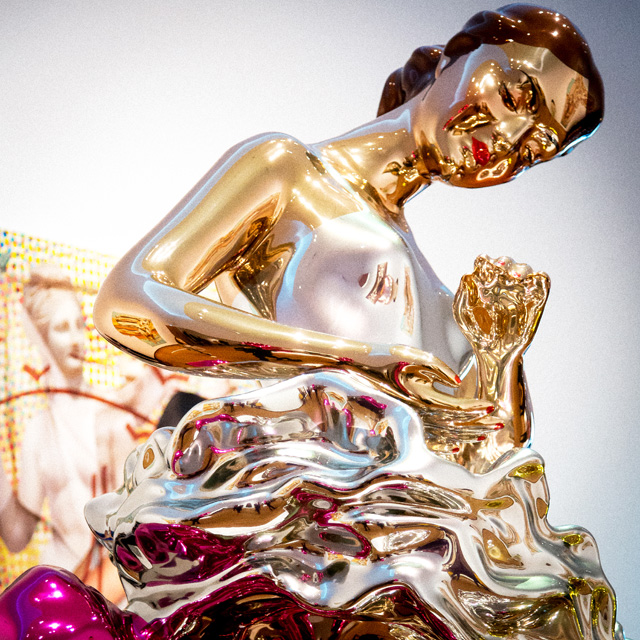 Recreated on a huge scale in airbrushed steel, the ubiquitous figurines of ballerinas, that no doubt many of us remember from our own childhoods, become something fresh. Koons is celebrating these knick-knacks and in doing so raising up the kitsch, transforming it into something grand, challenging our ideas of taste, because these huge metal figures are strangely beautiful. Speaking to Andrew Graham-Dixon for the BBC, Koons said: “My work has always been trying to communicate to people that it’s all right to accept your own history, your cultural history, the things that you grew up with.” 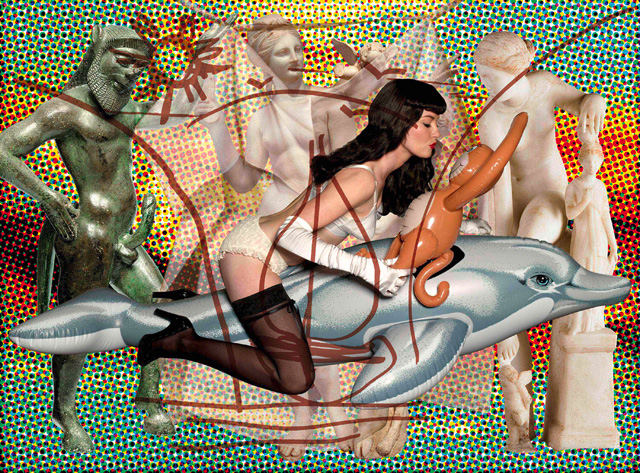 With the paintings in this room, he is trying to expand on this idea, by again erasing the distinction between “high” and “low” art. These large “collage” paintings overlap seemingly incongruous themes. He juxtaposes a classical statue of Venus (who is being pestered by a lusty satyr) with a model in sexy underwear riding an inflatable dolphin. The background looks like screen-printed pixels and an abstract scribble of a vulva is seemingly doodled over the top. It is fun to look at – there is a lot going on – and it is very Koons. It is not subtle, but remember, those ancient Greek statues, celebrated down the centuries for their “tasteful” naked marble, were originally painted in bright, gaudy pigments. Koons, it could be argued, has more in common with classical world than we would like to admit.

It is worth mentioning that these paintings are executed with extraordinary skill. They look as though they have been printed when, in fact, a workshop of artists has painstakingly applied the paint by hand, using a digital image as a guide. Photorealism is one thing, but no amount of artistry can recreate the work of the old masters, as is proved in the final room of this exhibition. And this is where those pesky glass balls make a reappearance. Here, Koons’s workshop has made facsimiles of several masterpieces, including Rubens’s The Tiger Hunt and Géricault’s epic The Raft of the Medusa. 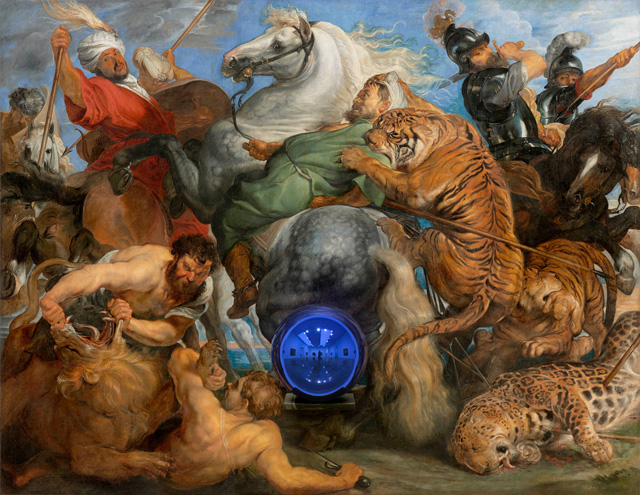 That Géricault’s most iconic work has been significantly scaled down seems strange, given Koons’s propensity for enormous art. But perhaps there is a very practical reason for this. Look closely at these canvases and you can see the struggles involved in trying to copy such beautifully painted works. Effects achieved by adding layers of paint over weeks and months, by painting and over painting, using idiosyncratic mark-making and complex techniques, are almost impossible to recreate convincingly. So, all we have, when we look at these shrunken versions, is a collection of constipated copies, with a blue ball stuck in the middle.

And why has Koons stuck a ball in the middle of these images? We are told that the glass reflects both the painting and the viewer, including us in the artwork, while paying homage to the past. But it doesn’t really work. It just looks clumsy. The idea is clumsy, too, and it’s a shame. It’s almost as though Koons has run out of ideas, and it is a deflating end to the exhibition, which is ironic, given the amount of times he references inflating things and inhaling breath in the short video that accompanies this exhibition. Make of that what you will. 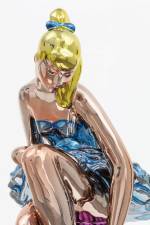 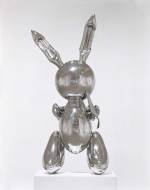 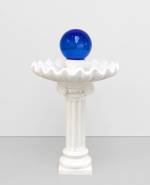 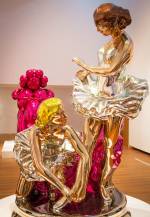