Entering Kate MacGarry’s exhibition of paintings by Luke Gottelier and furniture by Max Lamb is like being invited into a contemporary domestic dream, where colours are soft, complementary and glossy. The idea for the show was born when MacGarry was at the house of artist Peter McDonald, whom she also represents. McDonald had a Lamb piece below a Gottelier painting, and the coupling became clear to her.

Lamb’s furniture is made of expanded polystyrene sprayed with coloured rubber, which seals, hardens and waterproofs it. The material is deceptive and you need a tactile relationship with it to understand it; it retains the lightness of the polystyrene, but the rubber adds strength, stability and durability.

Lamb has mastered the contemporary fade of colour, which he employs in pastel and standard rainbows. Colour evolves in a slick, glossy covering that forms attractive drips at the corners. Scrap Poly Table 1 (2014) is an aggressive block of rainbow in the shape of a double rectangle. Scrap Poly Face Table (2014) is a low-lying table with two dimples and a longer, half-cylinder dimple that, together, create a neutral smiley face. I imagine these valleys conveniently collecting up stray keys, credit cards, lighters, uncurling £20 notes and iPhones. To the left is Scrap Poly Coatstand (2014), on which a few coats hang. In the office, Lamb vases (Scrap Poly Vase 1-3) hold flowers in water. Despite their extreme contemporary appearance, these objects are all pleasantly functional.

Lamb constructed the furniture from offcuts of expanded polystyrene he had accumulated in the studio after more than eight years of working with the material. His conscious use of offcuts is part of his design process in creating something economically resourceful within our ever-consuming and wasteful world. (One of his previous projects, Granite Prisms (2011), was inspired by granite offcuts he saw in the yard of a stone workshop near his studio in Tottenham, north London.) The nature of the offcuts mean the furniture is irregularly shaped, with the pieces half resembling chunks of concrete rubble. Lamb uses contemporary art to interrogate established materials, such as concrete and plastic, breaking down and reassessing their functional properties. Jeremy Deller’s Sacrilege (2012), a bouncy castle replica of Stonehenge, similarly plays on the properties of stone and plastic, questioning the material future of our contemporary cultural heritage. Plastic has become the relic that stone was to the Greeks and Romans. When will someone dig up a Jeff Koons and use plastic to define our society?

Lamb studied under Italian designer Martino Gamper, who recently curated a show at the Serpentine gallery titled Design Is a State of Mind (5 March – 18 May 2014). It seems that ceramics have had their moment in the spotlight and now furniture, disregarded in art for so long, is making a comeback. Although furniture has not been neglected by galleries and museums, it has usually been a part of institutions with a design focus, such as the Victoria and Albert Museum or the Stedelijk Museum in Amsterdam.

At the Museu Nacional d’Art de Catalunya in Barcelona, furniture along with ironwork, glass and woodwork are integrated freely within the Modernisme gallery. During the 19th century, artists such as Josep Lluís Sert, Gaspar Homar, Joan Busquets and Antoni Gaudí were creating architecture, furniture and art that created a complete aesthetic. When the economic and political mood is right, art demands further and non-conceptual functions, which is when design comes to the forefront.

Gottelier’s paintings are from the series Paintings of Animals and Leisure (2000-2004), but don’t be fooled by his amusing titles, such as Enema Painting (2002) and Rabbit Looking in the Mirror (2002). These paintings are considered and well constructed. Layers of colour and texture are built up from the starting point of a face that is distorted into abstraction. The paint is left to its own devices and forms a dripped imprint, in the same way that Lamb’s furniture does in 3D. No line is straight or planned, just like the offcuts, which have no predefined shape. The works apparently show reference to 18th-century caricaturists James Gillray, Thomas Rowlandson and Richard Newton. Gottelier’s paintings are like abstract in-jokes. A 2011 series of paintings involved the artist weaving secondhand ties through his canvases. He left them to hang off the bottom of the work, like a tie slung over the back of a chair after a long day in the office.

Woman with Tits (2002) features a layered, abstract background, the topmost colour being a dark green that reveals, between drips, shades of yellow, orange and green. A worming line of lime works its way around the canvas, which is ambiguously either figurative or abstract. Details are added in another layer with a scrub of bluish paint. This work is hung above Lamb’s Scrap Poly Bench 1 (2014), a long bench that fades from white to aqua to apple to lemon to rose. Leaning on another pastel fade bench, Scrap Poly Bench 3 (pastel rainbow) (2014), is Joie de Vivre (2001) in which a curling telephone wire of paint trails its way from top to bottom. Two bloodshot eyeball-like shapes peer upwards, dizzied by the colourful chaos unravelling above them.

Although they are chalk and cheese, the works of Gottelier and Lamb pair up in a complementary expression of colour and shape. It is a challenge to allow two artists to exhibit in one small space without competition or imbalance, and, here, an equilibrium is achieved – perhaps because the two artists occupy separate hemispheres or use different mediums, although, at the same time, this exhibition attempts to blurs those lines. It gives contemporary furniture a front seat on the London art scene. 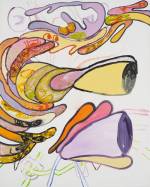 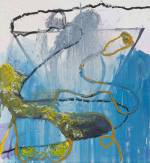 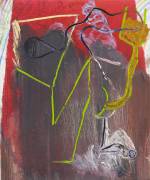 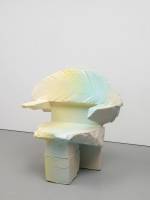 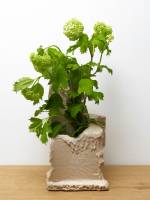